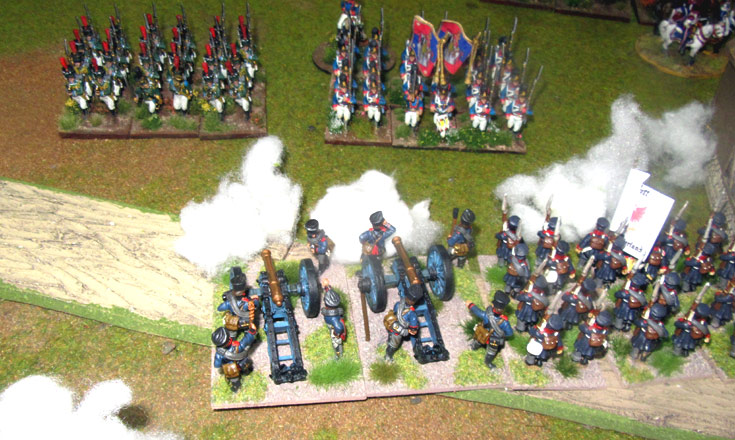 We were in the mood for a big Napoleonic game, to sort out Bill’s amendments to Black Powder v.2. The main one is the switching around of the move and fire phases, which makes much more sense in Horse & Musket games. For this one – another Napoleonic game – I came up with the scenario, while Bill supplied the Prussians, Campbell the Wurttemburgers, and I brought along the French and Badeners. It was set in August 1813, and I’d billed it as a sort of Gross Beeren light. In the real one, Prussians fought Saxons and French, but we replaced Saxons with Wurttembergers, and scaled everything down a good deal. We played it on an 8×6 foot table.

The result was a rather nice divisional-sized game, with some real challenges for both players. The table was dominated by two villages – Gross Weitzen on the left (above), and Kottbusser on the right. Both were held by Prussians in roughly brigade strength, with regulars in Gross Weizen and the neighbouring hill – the Kölsch hügel, and Landwehr in Kottbusser. More Prussian reinforcements came on along the northern table edge, while on Turn 1 the French and Allies appeared on the southern edge, at entry points II and III. The Prussians had to dice for the arrival of each brigade of their reinforcements, as did the French with their cavalry brigade, arriving at Point I.

The Allies got off to a good start, with my brigade of French entering the Weitzenwald to the south of Gross Weitzen, and Campbell’s Wurttemberg brigade deploying on my left, heading towards the hill. Over on the right Bart brought on his brigade of Wurttembergers, by the Helleswald, while a small two battalion brigade of Badeners backed by guns deployed on their left. So far so good. The Prussians rolled well for reinforcements, with Bill (or Von Billow) bringing on a brigade of infantry behind Gross Weizen, and a brigade of Landwehr cavalry, which deployed on the eastern side of the stream.

By now battle had been joined. My French came under fire from artillery as they emerged from the wood, while on my left the Prussian reserves occupied the Kölsch hügel before Campbell’s Wurttembergers reached it. That meant they’d have to assault it. Over on the Allied right Bart screened the Landwehr in Kotbusser, but the Baderners heading towards the stream and Gross Weitzen had to form square, thanks to the arrival of those Landwehr cavalry. Bart countered it by bringing up his own reserve – a brigade of Wurttemberg horse.

My assault on the town stalled in the face of determined Prussian musket fire and canister. Campbell was in trouble too, as Michael’s Prussians repelled his first attempts to assault the Prussian line. In fact, first blood went to the Prussians, who saw off a Wurttemberg line battalion. So, things were starting to go wrong. The good news was that the French cavalry had appeared, and it started advancing along the western table edge. So, at least we had that. At the same time von Billow kept rolling and failing to bring on his own cavalry reserve.

Back on the right, Bart’s cavalry charged the Landwehr horse, and predictably the raw Prussians were swept from the field. Actually it wasn’t that easy – it took three turns and a minor setback, but essentially that’s what happened. That left the Badeners free to assault across the stream. The aim of the game was to hold the village of Gross Weitzen and the Kölsch hügel with no enemy units on them, and to do it by Turn 12. So, the Kottbusser garrison wasn’t achieving anything, apart from holding up a brigade of Wurttemberg foot. So, the Prussians decided to come out fighting.

That was brave of them – four battalions of Prussian Landwehr and a gun battery against four battalions of Wurttemberg line. They never made any real headway, but they caused casualties, mainly thanks to their guns. By contrast the Wurttemberg gun battery and the horse battery were deployed by the stream, firing the other way – into Gross Weitzen. Still, the Landwehr assault fizzled out, as one unit broke and ran, and the others were so battered they retired back into the village. That of course left Bart free to assault over the stream, into the village that actually counted towards an Allied victory.

He did that with great flair. There wee four built up areas in the village, and two of them had been pinning down my renewed French assault. Bart’s Badeners charged over the stream, supported by close-range artillery fire, and drove the Prussians from the south-east quadrant of the village. That gave me the chance I needed, and I assaulted too, managing to drive the defenders from the south-west quadrant.

So, half the village was ours. The Prussians tried a counter-attack, but it failed, largely because art infiltrated the north-est quadrant with Wurttemberg jaegers. Their fire broke up the Prussian attack. So, we now held three-quarters of the village.

Over on my left though, Alisdair’s Frnech cavalry pinned part of the Prussian line on the hill, but when he got too close his French lancers were routed by Prussian musketry. This though, seemed to distract Michael’s defenders, and when a unit of pesky Prussian schutzen were driven back out of the way, the Wurttembergers launched another assault. Michael tried to turn his gun battery to face this new threat, only to have them charged by my French voltigeurs. Amazingly the plucky French lights didn’t get mauled by canister, and managed to overrun the guns. Until then they’s been the lynch pin of the Prussian line. Now everything started to unravel.

The Prussians were now on the defensive on the hill, with their far right pinned down by French cavalry. Campbell’s Wurttembergers made good use of this by charging in, all along the line. I didn’t think it would work, but it did. Thanks to some pretty awful die rolling Michael’s defenders were forced back, shaken. Only the unit in square was still there, but it wasn’t on the hill, which was now well and truly in Allied hands. Well, almost. One demoralised Prussian battalion still hung around on its northern slope.

Over in the village, Bart and I were set to eject the last of the shaken Prussians from the north-west quadrant of Gross Weitzen. By then though, we’d run out of time. The Prussians were hanging on by their fingertips, and while technically they were still contesting both the hill and the village, it was pretty clear that the next turn the Allies would sweep them away. Any, it was only Turn 7.

So, if we’d time to keep playing, a clear and unequivocal victory would have been ours. the only Prussian reserve left was their cavalry, which had singularly failed to appear as reinforcements thanks to Bill rolling a lot of 1s and 2s. So – technically a draw, but in effect a pretty convincing French and Allied win. Above all it was a great game – a sort of instant classic. It was pretty tense, and could have gone either way, but the final turn turned everything around. That’s the mark of a good scenario – and a memorable game. As for the rules, they worked well, and Bill’s amendments – posted on his blog – see the links page – really did the trick.