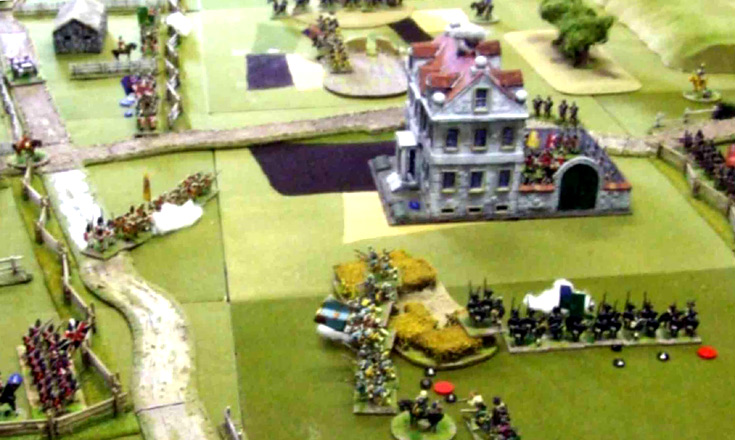 The first game of the year was a refight of the American War of Independence Battle of Germantown, which was fought on 4th October 1777. The refight took place in Bill Gilchrist’s garage in Livingstone, converted into a spacious wargames den. Bill and I commanded Lord Howe’s British, while Kevan Gun and Scott Duncan took charge of General Washington’s American rebels. in the real battle the British were surprised, as the Americans attacked out of the morning mist. They enjoyed a sizeable numerical advantage for much of the battle, until British and Hessian reinforcements could march to the sound of the guns. much of this advantage was squandered as the Americans launched repeated unsuccessful attempts to capture the Chew House (aka Cliveden), where a doughty British garrison held the strongpoint against all comers. It would be interesting to see if the American players would make the same mistake as Washington.

Naturally enough the Americans began by launching a spirited advance, with Sullivan’s division accompanied by Washington attacking to the right of Cliveden, while General Greene’s division attacked on the left. The first few turns were a little fraught for the British players, as I proved singularly inept at rolling the dice I needed to wake up my troops, and shake them out into some kind of line. It was Turn 3 before many of them scrambled out of their tents, but they did so just in time to meet Greene’s continentals, which were closing in on the British encampment. On the right only the Queen’s Rangers were ready for action, but their skirmish fire could do little more than delay the American advance.

At the last moment the 71st Highlanders moved up, lined a fence and delivered a healthy volley into the advancing Americans. The assault faltered slightly, and this bought enough time for the rest of Grant’s brigade to form a firing line around the 71st. yes, purists will point out that the 71st weren’t at the battle, but the forces were tailored slightly to suit Bill’s collection. Both sides now blazed away, and neither wanted to risk an all-out charge until their opponents were disordered and shaken by the firing. Over on the British left Brigadier Matthew’s Brigade of Guards formed a line and advanced towards the oncoming Americans of Sullivan’s division. This led to another extensive firefight, which continued for the rest of the game.

Back in Cliveden the garrison were proving themselves a thorn in the American side, as they kept on firing at the Americans as they passed by the house. The final straw for Washington came when they shot up one of his two small cavalry regiments, which were hoping to charge through a gap they’d spotted in the British line. That was enough for Sullivan and Washington (played by Kevan). He detached a brigade with orders to storm the house, and soon Cliveden was ringed on two sides by American continentals. Bill had played this game a few weeks before Christmas, and then Cliveden fell in a single turn. What would happen this time?

While this was going on reinforcements were entering the field. On the British left von Knyphausen’s Hessians appeared, and formed up on the left of the Guards. They were matched by the arrival of Armstrong’s militia, who appeared out of the fog on the Manatawney Road. However, they lacked the resolution to take on the Hessians, and on that flank the battle degenerated into a long range exchange of musketry. Over on the British right things were looking up, as first one and then another American regiment failed its “break test” and fled the field. This meant that Greene was now outnumbered slightly, and the British tide moved forward from the Limekiln Road, until contact was re-established with Cliveden House. Now if the defenders were driven out, at least they could escape under the covering fire of their comrades.

That was when the American assault went in. The first attempt was a failure – but only just. the defenders had been disordered by musketry, but some lucky dice rolls and the fact that the house itself counted as a “+3 defence” meant that the attack was repulsed. The Americans – all Marylanders – regrouped and tried again on Turn 10, this time with a simultaneous attack from two sides of the house. The assault was a ferocious one – that’s it taking place in the picture below – but once again some very lucky saves meant that the defenders held their ground. Despite not having taken any real casualties the Americans were forced to take a “break test” – one per attacking unit and one for a unit which had been supporting the assault.

Each time Kevan couldn’t roll higher than a “5” on two D6s, and as a result the two assaulting units broke and were taken from the table, while the supporting unit retreated.  That pretty much took the wind out of the American sails. It also coincided with the arrival of more British reinforcements – Agnew’s brigade, which  marched up Main Street towards Cliveden. Unfortunately it was also time to pack up. Sure, the Americans had been given a bloody nose, and like the real battle this was shaping up to be a British victory. however, we could have done with another two turns of fighting – to the end of Turn 12. The chances are we could have pretty much carved up the Continental army, and even captured the traitor Washington. Unfortunately it was not to be, but we all went home happy after spending a Saturday afternoon playing a thoroughly enjoyable game of toy soldiers.