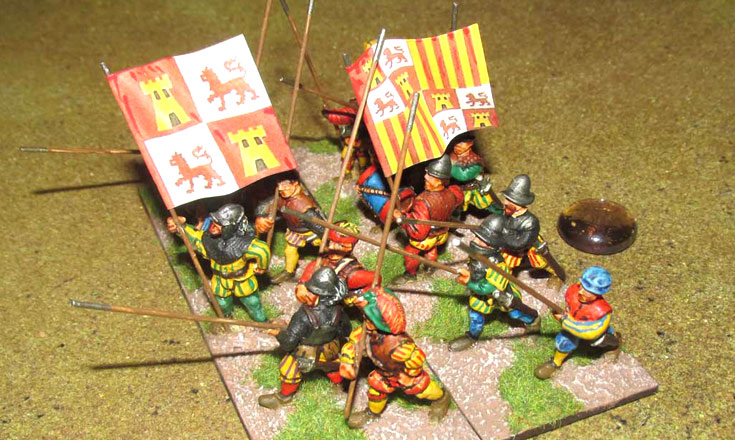 About once a month we play an Italian Wars game, under the watchful eye of “German Michael”. Each time our armies seem to be a little bigger, so this month, Michael decided to lay on a long 12 x 4 foot table, with absolutely no scenery, apart from a road down the centre to hide the gap between two terrain mats. No trees, no buildings … nothing. At least though, that left plenty of room for the figures.

This big flat open plain was set near Florence, which, despite nestling in the Tuscan hills, actually has a few flat bits nearby. Well, in this fictitious battle the French and the Imperialists both turned up to fight each other on this plain, assisted by their Italian allies – Florence for the Imperialists and Venice – my army – for the French.

With such a long thin table it was difficult to see exactly what was going at its far end, but essentially while the Venetians on the French left and the Florentines on the Imperialist right both postured and skirmished, the main armies got stuck into each other. Naturally enough the French right wing led the attack. That was the place of honour where the serried ranks of French gendarmes and men-at-arms were posted. Campbell had five cavalry units to launch into the attack, spearheaded by the finest gendarmes in Christendom.q

Facing them were the bulk of the Spanish cavalry, bolstered by a few colunellas of Spanish pike. The initial clash went all France’s way – as it should. However, Campbell forgot the “galloper” rule, which meant the victorious gendarmes have to charge the nearest unit after wiping out their opponents. Bart had cunningly deployed his pikes behind his weak cavalry, and so the gendarmes had to charge the pikes. Inevitably it didn’t end well.

Both sides were bloodied, but the gendarmes were stopped, and forced back to lick their wounds. Even then, the gendarmes almost pulled it off. So, the battle on that side descended into something of a stalemate, as the Spanish cavalry counter-attack was held by the French archers (men-at-arms), although both sides lost a few cavalry units in the process.

In the centre a more modern battle was developing. The Imperialist foot seemed to be reluctant to advance in front of their gun line. Instead, the German guns pounded the Swiss pike blocks and covering skirmishers opposing them. “New Michael” had enough of this and advanced, despite the growing accuracy of the enemy guns. Then, on the French left, a strange thing happened. After an initial cavalry skirmish where a unit of Venetian mounted crossbowmen were destroyed by Florentine men-at-arms, the two Italian commanders conferred.

Then, the whole Venetian army turned to its left, and headed diagonally across the table towards the Imperialist flank. The next turn the Florentines did the same, heading towards the Swiss. It seems the two old and depraved Italian condottieri commanding the Venetian and Florentine armies had reach “an agreement”. Sure enough, Jack (Florence) Glanville and I declared “Italy for the Italians”, refused to fight each other, and threaded our armies past one another to reach the enemy flanks. We hadn’t changed sides – we just refused to fight fellow Italians, and take the fight directly to the “otramontanes”  – the people from over the mountains.

Jack’s cavalry rolled up a Swiss halbardier unit, and then a pike block, which really altered the play in the centre of the table. Meanwhile, while my own stradiots were repulsed by the closing fire of an exposed Imperialist battery, and then my men-at-arms were shot up, the gun was eventually ridden down. Similarly my cavarly rolled over a unit of landsknecht halbardiers, and pinned the landsknecht pikes until the Venetian foot and guns appeared.

That was where the game ended. There was still a lot to play for, but with all the losses added up, Michael declared the game was a minor Imperialist victory. that was based on units killed – six French to five Imperialist. We had a great game, full of everything you’d expect – Swiss steadfastness, French aristocratic rashness, Spanish finesse, German firepower and Italian duplicity.  I’m looking forward to our next outing already – by which time the Venetian army will be a little bigger, and ready for more Renaissance mayhem.