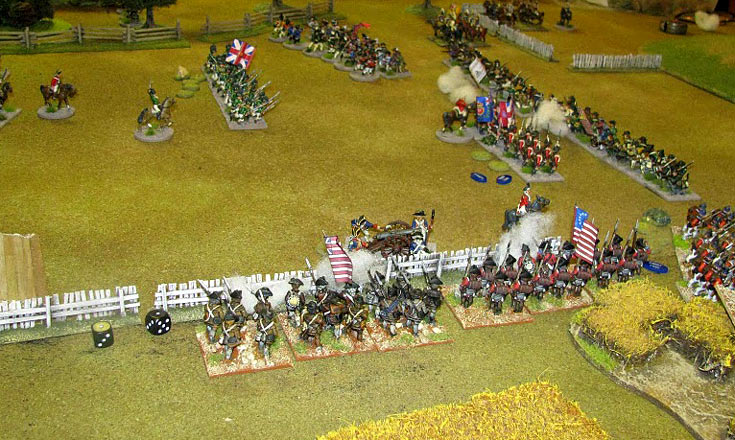 This was actually two games in one. The first one was over so quickly that the battle was refought – so two games for the price of one. This small American War of Independence game was very loosely based on the Battle of Cowpens, fought in the backwoods of South Carolina in January 1781. In the real battle, Colonel Tarleton’s “flying column” of around 1,000 men was chopped up by a similar number of rebels – a mixture of continental regulars, militiamen and cavalry. I recently refought the battle using British Grenadier rules, and that time the Americans won, although the remnants of Tarleton’s force were able to retreat in good order. For over a year my wargaming crony Bill Gilchrist has been trying to adapt Black Powder for the American War of Independence, with distinctly mixed result. The problem centres around the fact that the rules work best when you’ve got two armies with relatively similar abilities. He’s been struggling to accurately reflect the generally poor quality of American militiamen, and this game was another of those experiments, trying to tweak the factors to get it right.

I say “loosely” based on Cowpens, as Bill’s order of battle meant that the poor British were outnumbered, rather than having rough parity of numbers. The British had around 100 figures on the table, and the rebels fielded almost 170. As for the troops themselves, Tarleton probably had a greater proportion of cavalry at his disposal at the real battle (a double-edged sword), and finally – for the purists amongst you – the 71st wore trews, not the kilts worn by their tabletop counterparts! As for the battlefield itself, the real thing was fought in open woods, but this one was played out in the open.  Also, in this refight the British had to cross a gaudily-based stream which didn’t feature anywhere near the real engagement, spanned by a fantasy wooden bridge wide enough to drive an American interstate cross over!

Okay, on to the first game. The Americans had a free deployment, so rather than setting up in three lines like they did in the real thing, they deployed in a long line, which made the most of their firepower. When the British advanced the Americans bided their time, then charged with their militia (!!!) to drive in the British skirmishers. They then proceeded to shoot up the oncoming British at close range, forcing the British Legion infantry to break. That left the 71st Highlanders to face three enemy units, and when they charged one unit they were charged in the flank by the supporting American militiamen (!!!). Throughout the game the British Legion cavalry stood around, waiting for orders that never came. The breaking of the Highlanders effectively marked the end of the game – fought to a conclusion in just 1 hour 15 minutes.

That meant there was plenty of time to stage a refight. For this one Bill removed one of the kick-arse units of South Carolina militiamen, and made the rebels deploy historically in three lines – rifle-armed skirmishers, militiamen, and finally the regulars, supported by two small units of cavalry. This time the British were more cautious, and concentrated their three infantry units (the 7th Fusiliers, 71st Highlanders and the British Legion foot) on their left flank, in an attempt to counter the American superiority in firepower. The Americans advanced, and the game on this flank developed into a long-range musketry duel that achieved little, apart from pinning the best British units in a corner of the table. The Americans began lapping round the British flank, so the British Legion cavalry swept forward to drive them from the field. Amazingly, not only did their target – a skirmish unit of American riflemen – stand their ground, but they even repelled the assault, buying time for the Americans to reform their line, ready for another cavalry assault. When it came the Legion Cavalry charged home, but were bounced.

With time pressing the game was brought to a close, but it was clear that there was now no real way that the British would win the game. There it was – two British defeats in two games, and a continuation of their poor track record in American War of Independence games at the club using Black Powder.To be honest, Cowpens is pretty hard to win for the British with more historical orders of battle and more detailed rules. When they’re outnumbered so comprehensively, and the American commander behaves aggressively with his militiamen, then a victory for the good guys becomes even harder. No doubt Bill will continue his Black Powder tweaks, but until he manages to find a way to reflect the historic capabilities of American militia then those British defeats are probably going top continue!