This was another lockdown game, played with my near neighbour Gyles. He fancied something nautical this time, so we opted for the Age of Fighting Sail, and Kiss Me, Hardy. The idea was that a small squadron of five French ships-of-the-line had broken out from Toulon  in a storm, and were heading east along the Côte D’Azur. Off Cape Lardier they ran into a slightly smaller British squadron, and battle was joined. The game – perfectly sized for an evening’s gaming – was fought out on a 6×4 foot table. 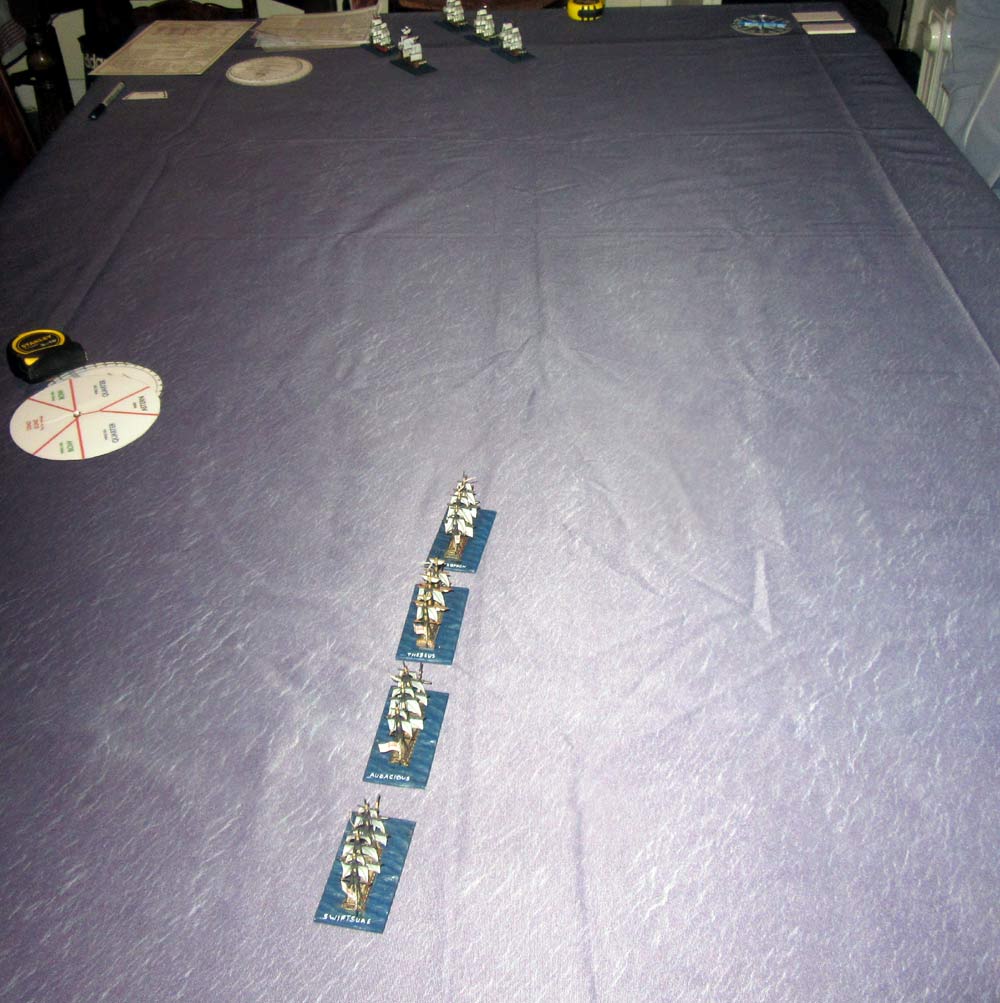 This was a contest of skill over firepower. The French squadron consisted of the First Rate Orient (of 120 guns), and four Third Rates – the 80 gun Tonnant, plus the Aquilon, Spartiate and Guerrier (all 74s). The British just had four 74s, the Audacious, Bellerophon, Swiftsure and Theseus. The kicker though, was that the French were rated as Average San Culottes, while the British were all Elite Jolly Jack Tars, which gave the British a real edge in skill. So, all things considered the two forces were roughly equal. 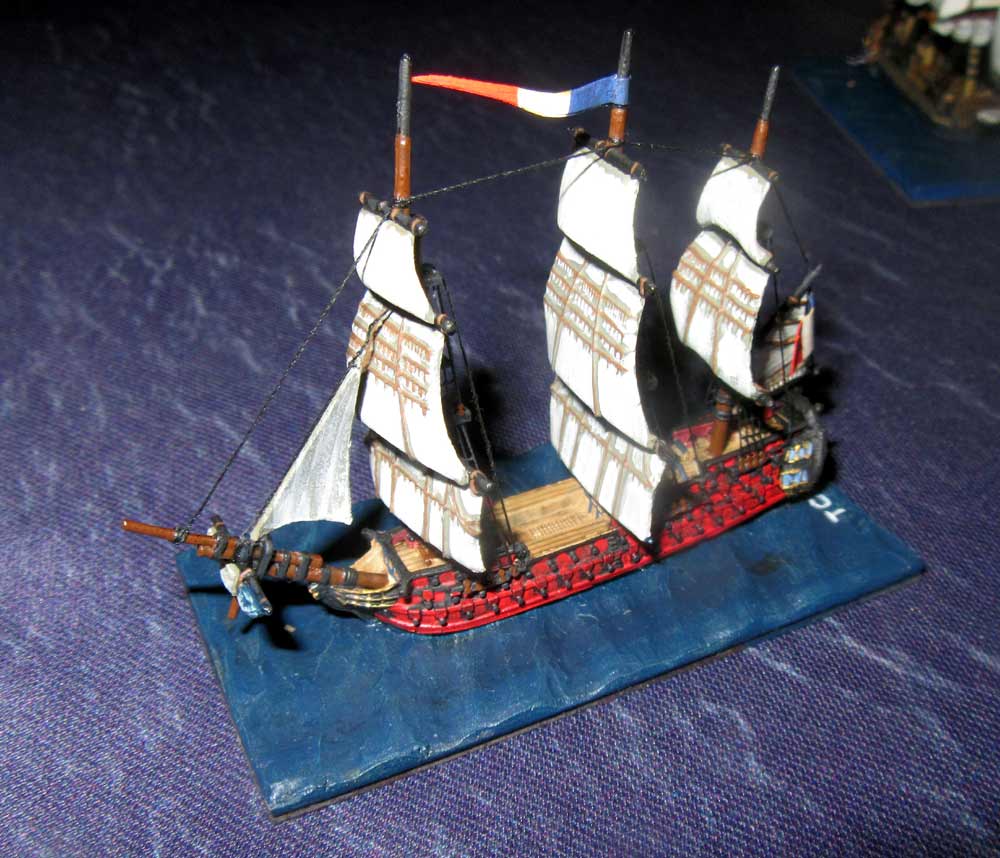 As the guest, I gave Gyles the option of sides, and he chose the French. They were set up on the North end of the table, and the British at the South end. The wind was coming from the West, so nobody had much of an advantage there. I pretty much headed straight forward, with my flagship Bellerophon in the lead, followed by everyone else in line astern. The French though, decided to split their force, sending the flagship Orient and the Tonnant to the south, east, and the rest beating up to the south-west. That decision pretty much decided the course and pace of the game. 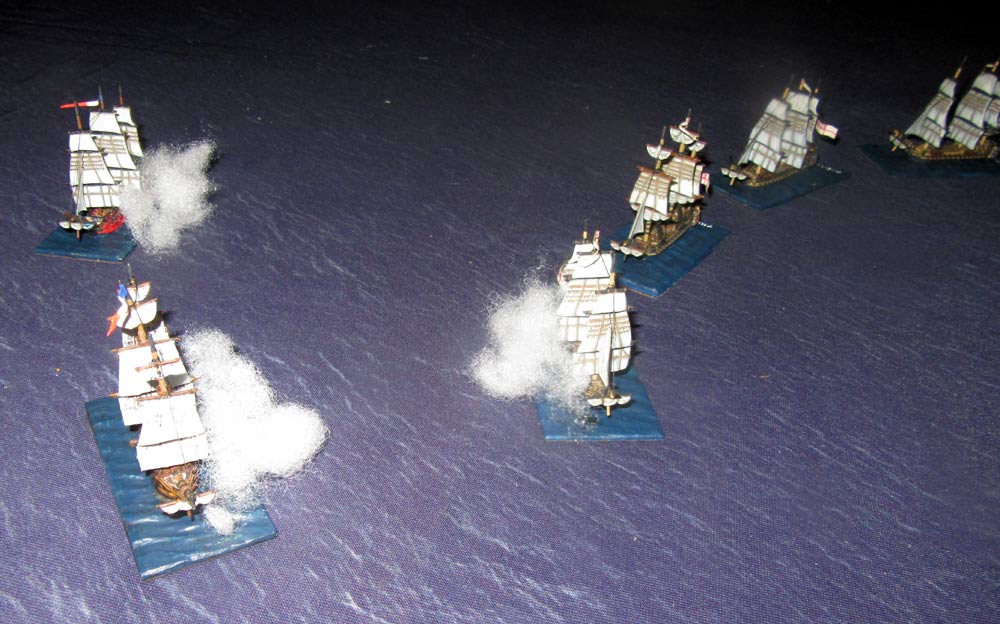 In these things nothing happens quickly – both sides approached each other slowly, but eventually the range closed to within extreme gunnery range (30-40cm).  Gyles opened fire with his two larger ships, aiming for my rigging. As Bellerophon was in front she started getting chewed up, or rather her rigging did. About that time I altered to port, with my neat line playing follow-the-leader behind the flagship. Gyles tried to keep away, heading a little further to the east, but by now his three 74s were at the far side of the table, well out of gunnery range. That meant that in terms of ships, the British outnumbered the French two to one. That worked for me. 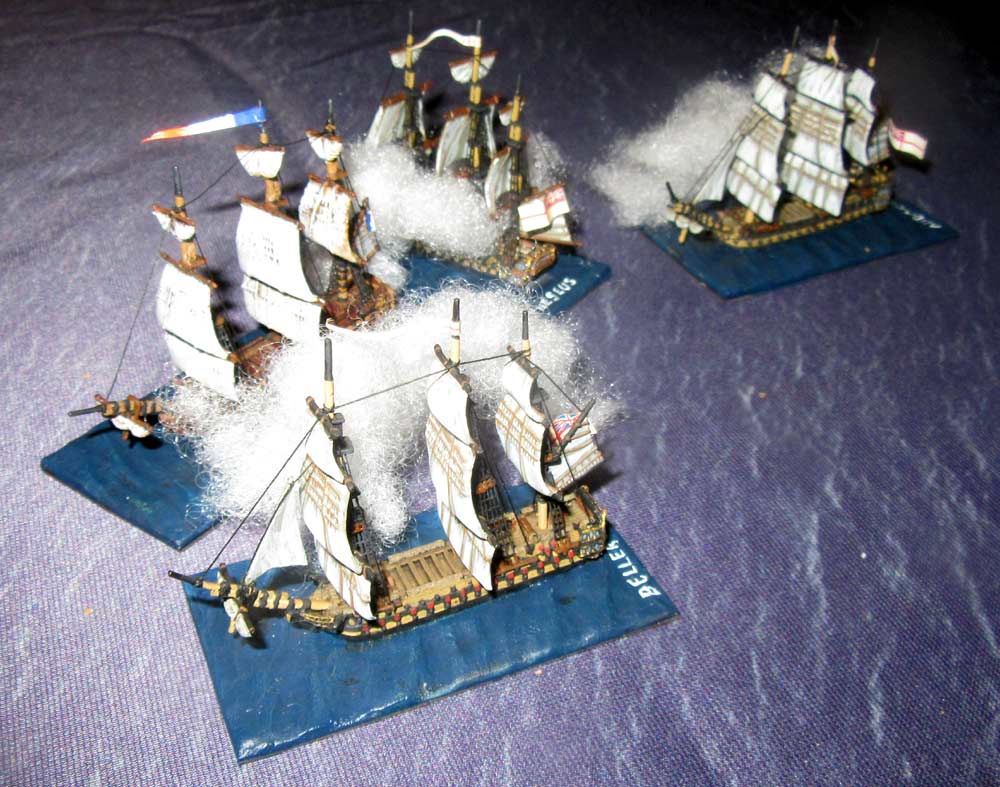 I was still getting shot up badly, and the range was now down to Medium (13-20cm). That was when Bellerophon lost her mainmast. My plan was to hold my fire until I was at short range, but clearly that wasn’t going to be an option for my flagship. So, she fired back, scoring some telling hits on Orient’s hull. Then, things started to get really messy. The Bellerophon and the Orion went broadside to broadside, at close range, but then the Theseus managed to rake the French flagship, then slip alongside her unengaged starboard side. I’d have liked to add another ship, the Audacious, but there was still the  powerful Tonnant to deal with. 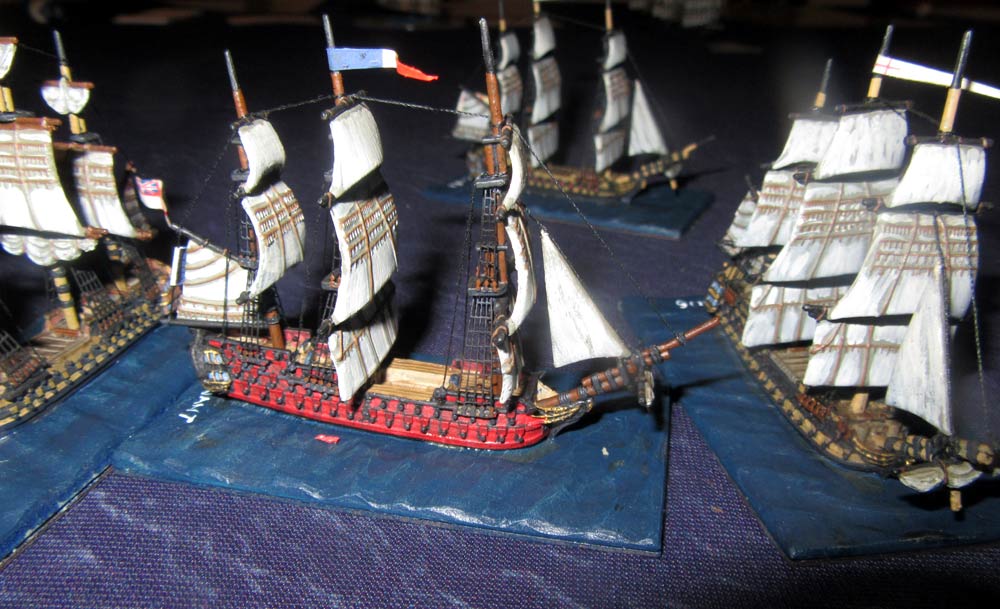 What happened next was the French 80 gunner tried to take on the Theseus, to take pressure off the Orion. So, the British slipped the Audacious in on her opposite side, and the Swiftsure astern of her. So, three British ships were now pouring fire into her hull at close range. With most of her gunports smashed in, and her hull points below half, she took a strike test … and failed. So, leaving Theseus to send boats to claim the prize, the Audacious and Bellerophon were free to deal with the more powerful Orion. 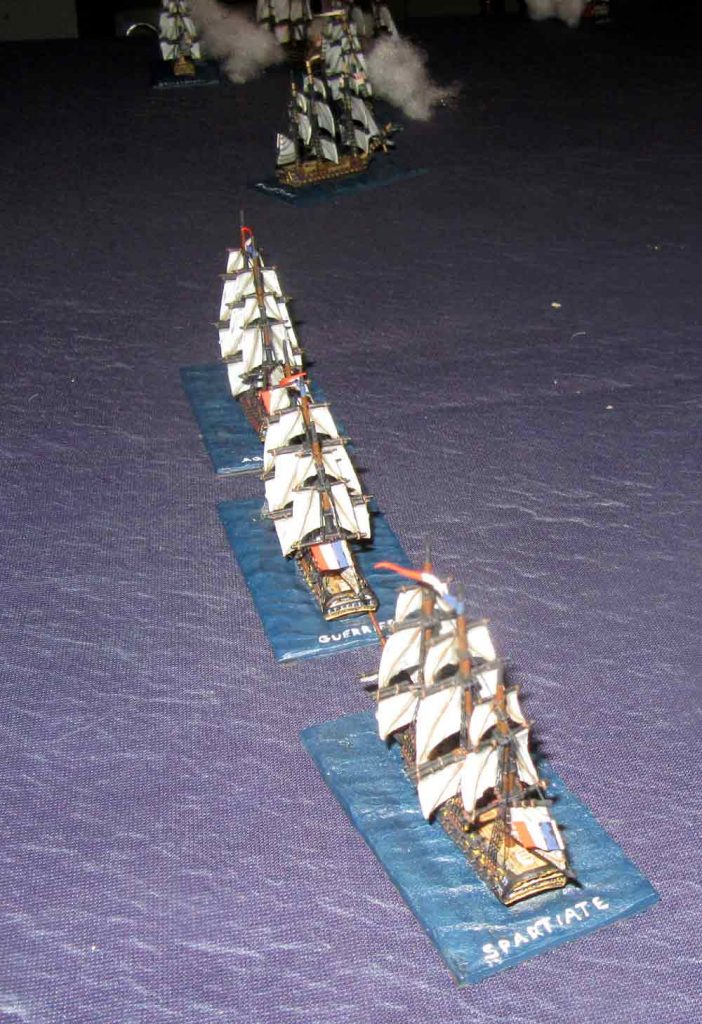 By now though, the other three French 74s were heading west at full tilt, hoping to intervene before it was too late. They almost made it too. The Swiftsure turned to the south to block their path, and with the Audacious busy with the Tonnant, the French flagship was busy fighting off the two remaining British 74s. This was the fiercest part of the fight, but the odds were now turning heavily in the British favour. 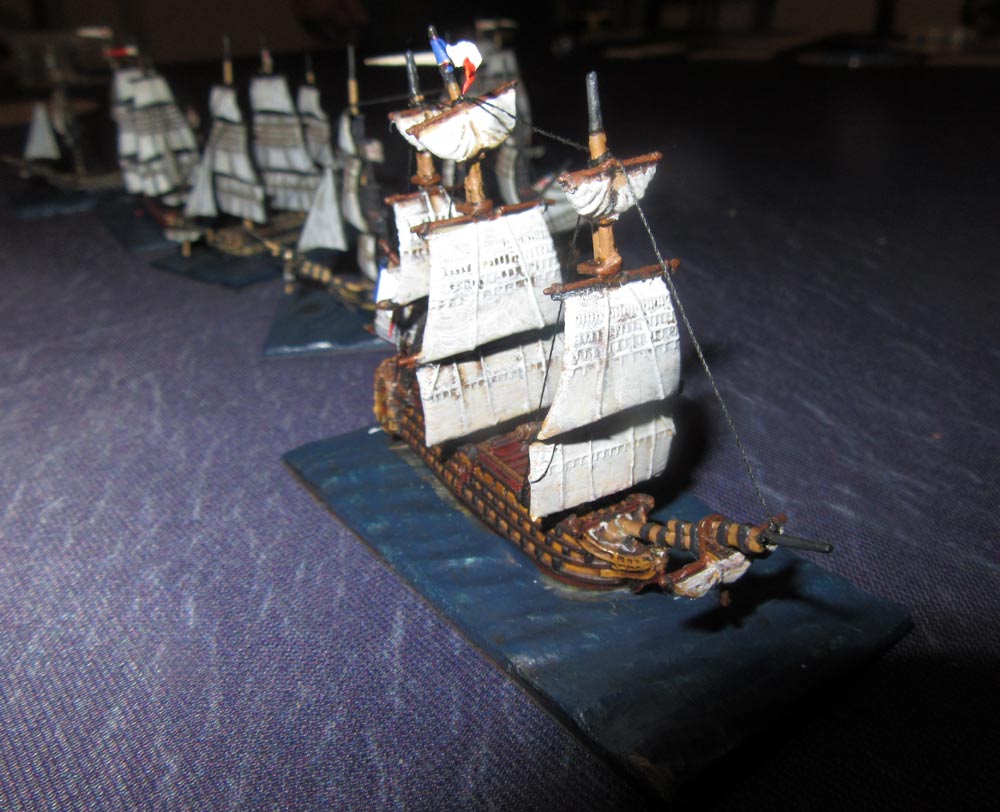 The Orion had taken a lot of hull damage, and so had lost a lot of her broadside dice. She started off with a stonking 14 – which means 14 dice per broadside. Now though, after several turns of close-range mauling, she was down to just two D6. So, the British were pounding her hard, and she was well past the 50% damage stage, when she had to take Strike tests. When her mainmast fell, that was the end, and on board the Orient, Admiral Brueys gave the order to strike the French colours. 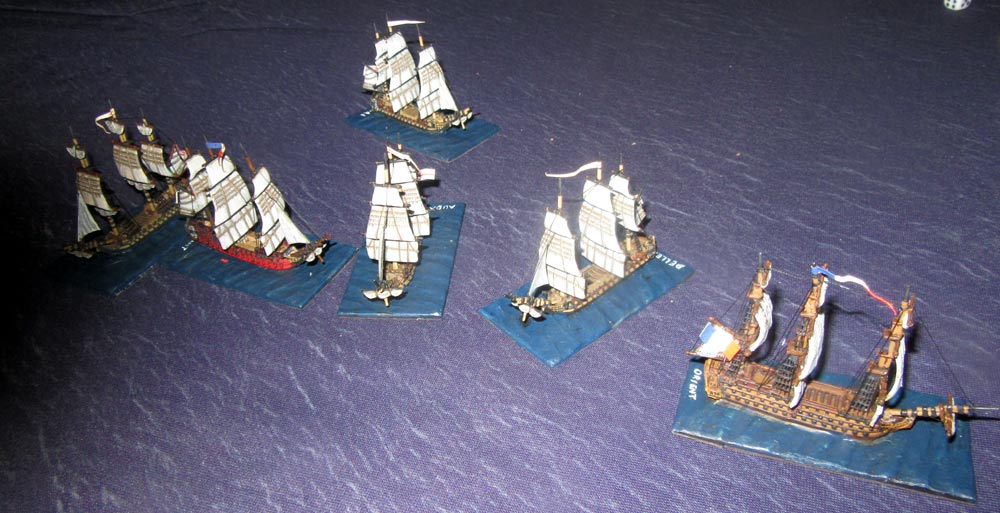 It was now after 10pm, and we’d been playing for more than two hours. So, we decided to give it two more turns, and then call it a night. Gyles was keen to try and recover one of his two lost ships, while two of my own were fully occupied sending boarding parties over to secure their prizes. That meant it was up to Audacious and Swiftsure to head off the three French ships, Aquilon, Guerrier and Spartiate. Would they hold them off, or would the French arrive too late, and find themselves outgunned and outnumbered? 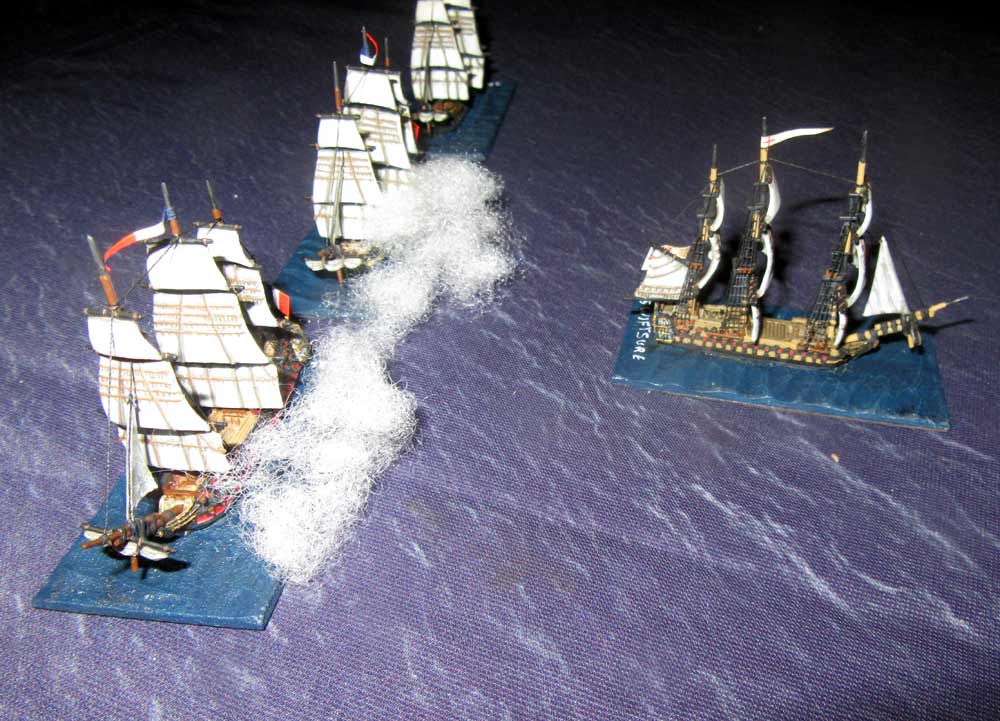 Actually, in the end it was a bit of both. Some nifty sailing by Gyles meant that his column of ships passed astern of Swiftsure, and the Aquilon and Guerrier raked her as they went past. The British Third Rate was clawed up pretty badly, but she passed her strike test, and lived to tell the tale. More importantly, she’d have a chance to turn to the west, and fire back at the enemy ships. 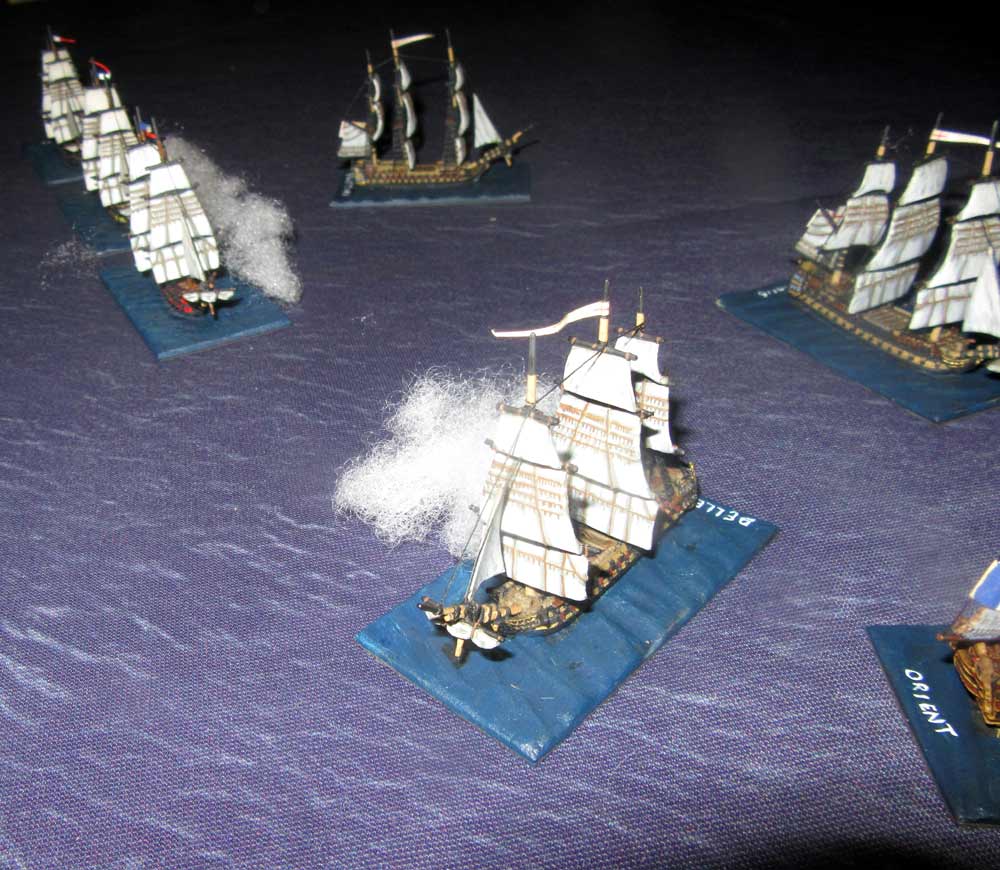 By now, Tonnant and Orion had British prize crews aboard, and they were busily getting the ships underway. That left the British to form a line between them and the three French Third Rates. So, Theseus protected Tonnant, Bellerophon guarded the Orion, and Audacious spanned the gap between the two, firing her larboard guns at the approaching French. That meant that with Swiftsure back in the game, the French now had little chance of recapturing their lost ships. So, with time having run out, we decided that they’d do the sensible thing, haul off to starboard, and head back to Toulon. So, the game ended with a clear British win. That means Gyles will want his revenge! Just now though, with the pandemic still raging, we were just happy to enjoy an evening of gaming. 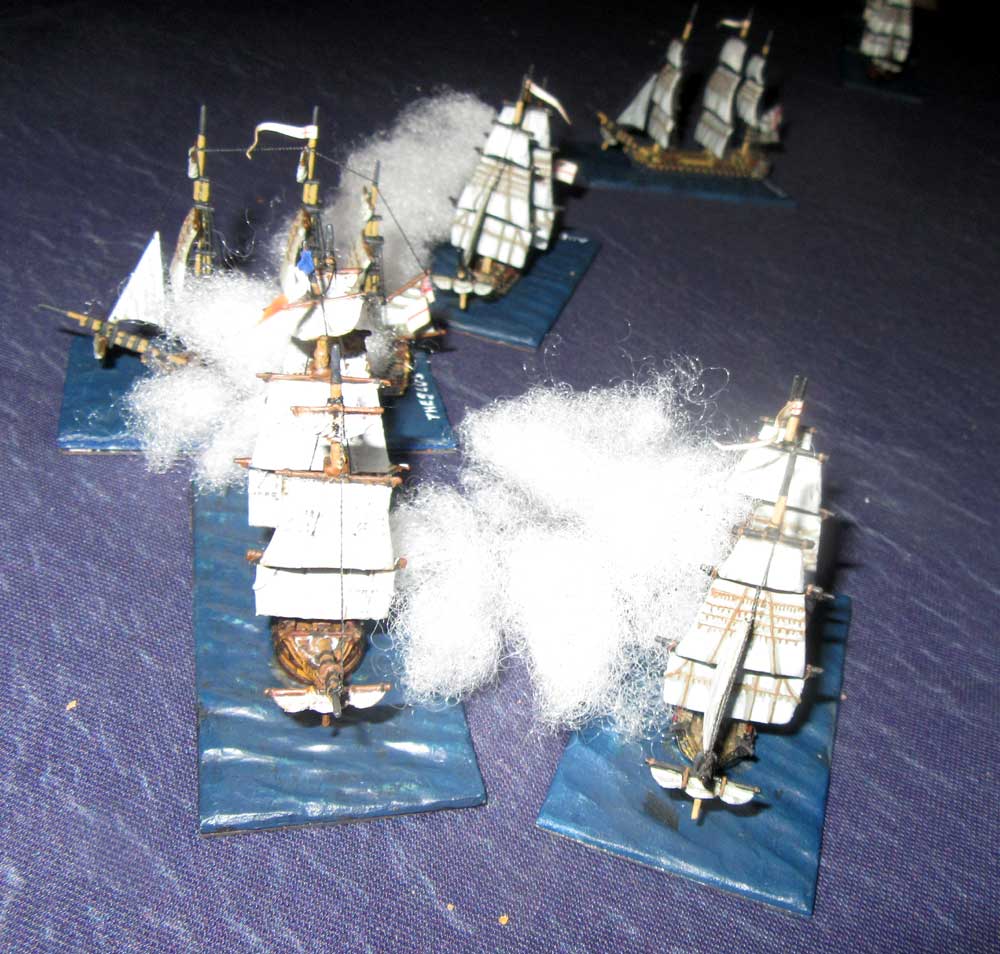