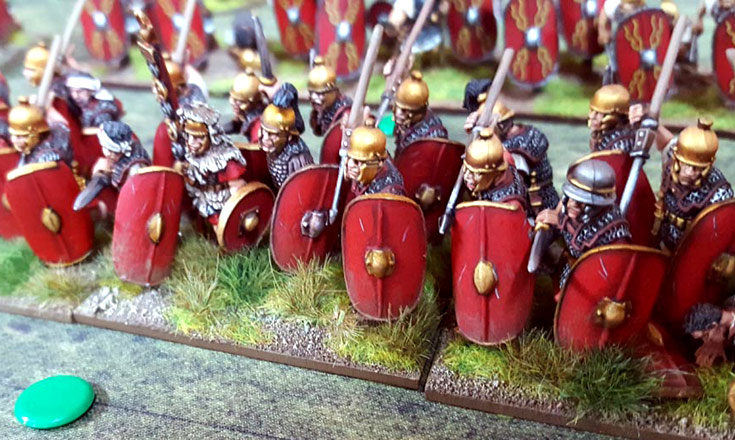 Last Thursday Edinburgh was gripped by snow, and while it all looked very pretty, it meant the club was closed. So, this week’s game was all the more enjoyable for the forced absence of the week before. A while ago I’d arranged an Ancient game with Dave Irmrie, with his Marian/Caesarean Romans against mine. It was meant to be a one-on-one game, but in the end we had six players – Dave, Peter and Ken on the Marian side, and Chris, Campbell and I fighting for the Sullan cause.

The game was set after Sulla returned victorious from the Mithridates War, landed in Brindisium, and marched on Rome. Blocking his way outside Canusium (now Canosa in Apulia) was a Marian army led by Gaius Norbanus. The Sullan army was spearheaded by a vanguard led by Quintus Metullus Pius. The two sides deployed for battle on a convenient plain – or rather an 8×6 foot table divided into 20cm squares, with just a fringe of wooded hills on one side, and a small orchard to break up the open terrain.

We both had a little over 175 points-worth of troops, but we weren’t really counting. More importantly we both had 14 victory tokens – the things you surrender when you lose a unit. When the jar is empty, you’ve lost the game. Both sides had a core force of two legions – each represented by four “cohorts” of legionaries. The Marians had no cavalry, but a bunch of Spanish allies, while the Sullans had a similar number of Galatian and Numidian cavalry and some skirmishers, backed up by my ballista unit which still smelled of freshly-applied varnish.

Just as in just about every other Ancient game I’ve played, the two sides cautiously advanced towards each other. Unlike most battles though, this time my Romans were facing their counterparts – a line of equally tough legionaries. So, we fully expected this game to be something of a hard slogging match, at least until one side or the other managed to break through the enemy line. On the flanks Chis on the left and Campbell on the right edged forward with their cavalry, waiting for the right moment to launch an attack against the Spanish light troops in front of them.

First blood went to us. Chris’ Numidians feinted to the side, and the Galatian cavalry behind them launched a charge which ran down a unit of Spanish light infantry. The Marians duly surrendered the first victory token of the evening. A lot more were going to follow. The next turn this was countered on our right, when Campbell lost his unit of Numidian cavalry, cut to pieces by Spanish javelins. By that time though, the main battle lines of legionaries were squaring up for the real fight.

When they clashed nobody won an immediate victory. All in all though, the Sullans got the better of the first couple of turns of fighting, disordering and pushing back most of their opponents Campbell garnered another token when he routed a unit of Spanish infantry, but lost his own cavalry in the following round of combat. So, honours were still even.

Then, the first legionary unit broke. it was a Marian one, standing across the main road – the Via Latinium. Two more tokens came our way, and we started felling fairly cocky. Our luck continued, with Dave losing one of his nicely-painted Marian legionary units. This gave us the numerical edge in the centre of the table, and on the left I started pushing forward down the road, with Quintus Metullus leading the way. Things were starting to look rosy .. or so we thought.

I went to the bar, and when I came back everything had changed. Campbell had lost both of his Galatian cavalry units, and Chris had lost one of his. All succumbed to being disordered when charging into Spanish troops, and then broken when the Spanish either caught them in the flank, or brought up reinforcements. So, that means we’d lost 6 tokens in a single turn. That means the game was still all to play for, with both sides having 7 or 8 tokens left in their jars.

The loss of our cavalry blew a pretty big hole on our right, but the Spanish were stopped in their tracks by my secret weapon. The night before I’d painted up a ballista unit, and with a whole bunch of ammo tokens and a range of three squares (2 feet) they could hit the enemy, without them hitting us back. The end result was two more dead Spanish units, and two more victory tokens. Chris took another one on his side of the table – I think thanks to a Galatian cavalry charge – and so we were slightly ahead – 7 tokens left to 5.

That, of course, was when it all went wrong. the Marians lost another legionary unit, but we lost two, both on the same turn. You see, once a unit becomes disordered you really need to pull it back to dress its ranks. However, in the thick of a legionary battle, you can’t do that too easily, so disordered units had to take their chances with the rest. So, both sides had front lines of disordered units, where another hit would mean the unit would be lifted off the table. So, this really was a fight to the death, and we were dying faster than they were.

However, Quintus Metullus was still advancing down the Via Latinium, driving all before him. He took out another legionary unit, which meant there was now nothing between him and the enemy camp. Capture it and victory would be ours. However, was when disaster struck. First, Campbell lost a legionary unit, which meant both sides just had one token left. then, Chris’ last unit of Galatian horse was charged in the flank, and swept from the field. So, with victory within our grasp, we ran out of tokens! That meant victory in this hard-fought battle went to the Marians!

Sometimes, you play a game and everyone thinks it was OK. but nothing to write home about. This time though, everyone had a blast! Chris had never played the rules before, and he was really impressed by the speed of the game, and just how much fun it was. the rest of us had a great time too, especially because the two sides were so evenly matched that the battle went right to the wire, with either side poised to win or lose. My “unit of the game” award went to my new ballista  one, which had Dave cursing it. I suspect though, that next time his army takes to the field he’ll have one too. It all looked terrific, with the lead coming from three collections – mine for the Sullans, with Jack Glanville’s Spanish and Dave’s lovely legionary units making up the Marian side. I’m already looking forward to the next game.