This week saw a return to Yorkshire, and the fictitious struggle between the Royalist Earl of Doncaster and the Parliamentarian Earl of Rotherham. The latest clash took place not far from the last, on the outskirts of Doncaster. The battlefield had a few scattered fields and hedges in it, and a village. Oh, and a mobile marsh, but more of that later. We played it out on a 6×4 foot table. 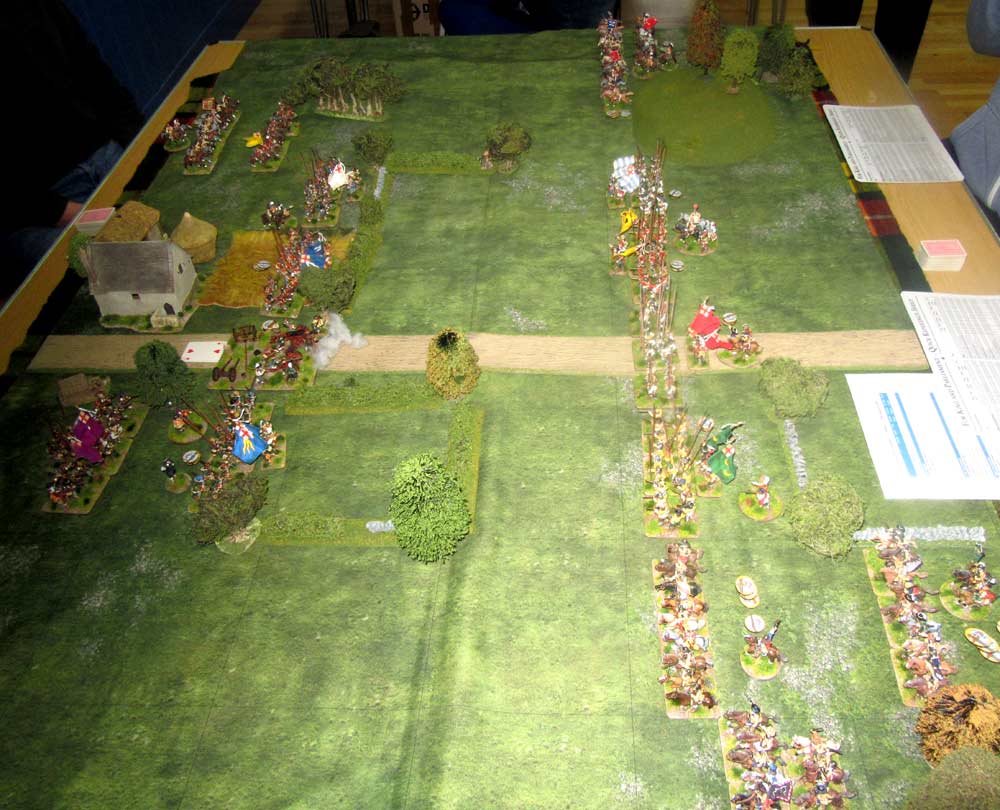 Both sides were fairly evenly matched, with four foot regiments a side – one of which was “Raw”. The Parliamentarians had three cavalry regiments arrayed in the “Dutch style”, plus another  small regiment of dragoons, and a battery of guns. For their part the Royalists had five “Swedish style” cavalry regiments and another of dragoons. One of the cavalry units on each side was “Raw”. 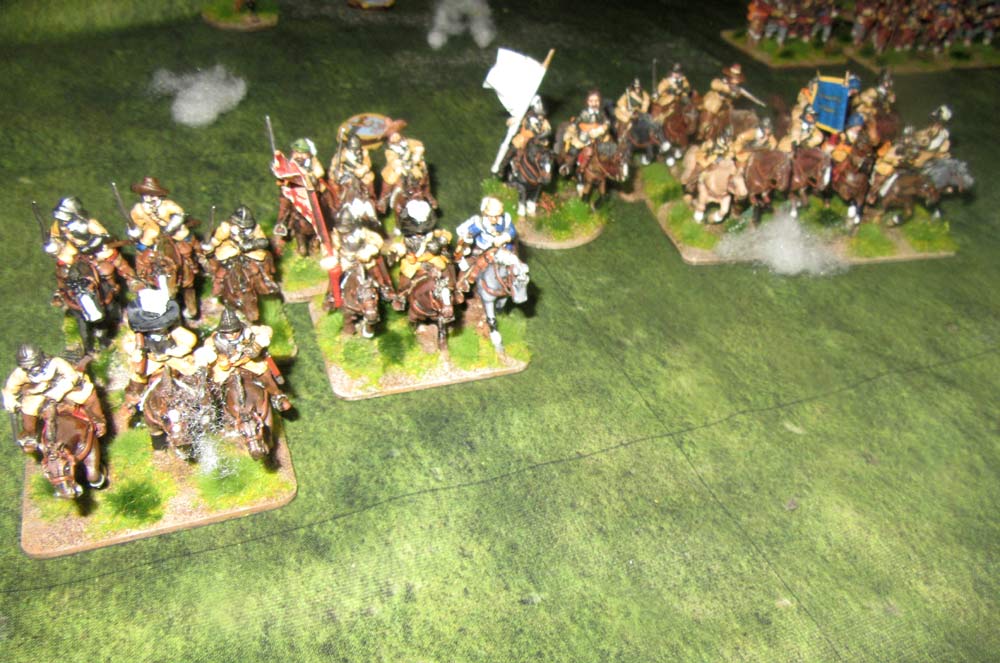 The deployment was fairly standard – foot in the centre and cavalry on the flanks. Mally and I commanded the forces of Parliament, while Sean and Gyles took the Royalists. The Parliamentarians won the initiative and so got to move first. This meant we were able to deploy out guns, and rush three of our foot regiments forward to the line of hedges which fringed the village of Cadeby. For their part the Royalists plodded forward all along the line, so it was clear they were keen to attack as quickly as they possibly could. 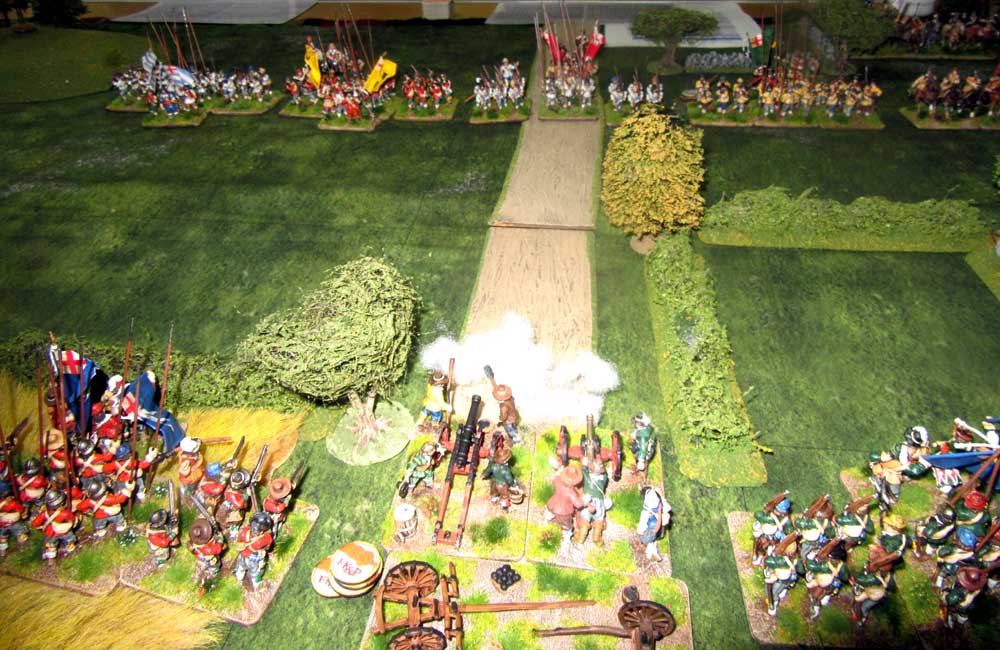 So, we blazed away in an attempt to stop them. This had a mixed effect. Mally’s two foot regiments on the left both scored hits on their opponents, causing them some disorder. My guns missed though – in fact they would keep on missing throughout the game! For their part the Royalists did better on the left, with Sean’s left-hand regiment reaching the salient formed by Barraclough’s regiment in a hedged field, a little in front of the rest of our line. Both sides began firing at each other over the hedge, and scored hits. 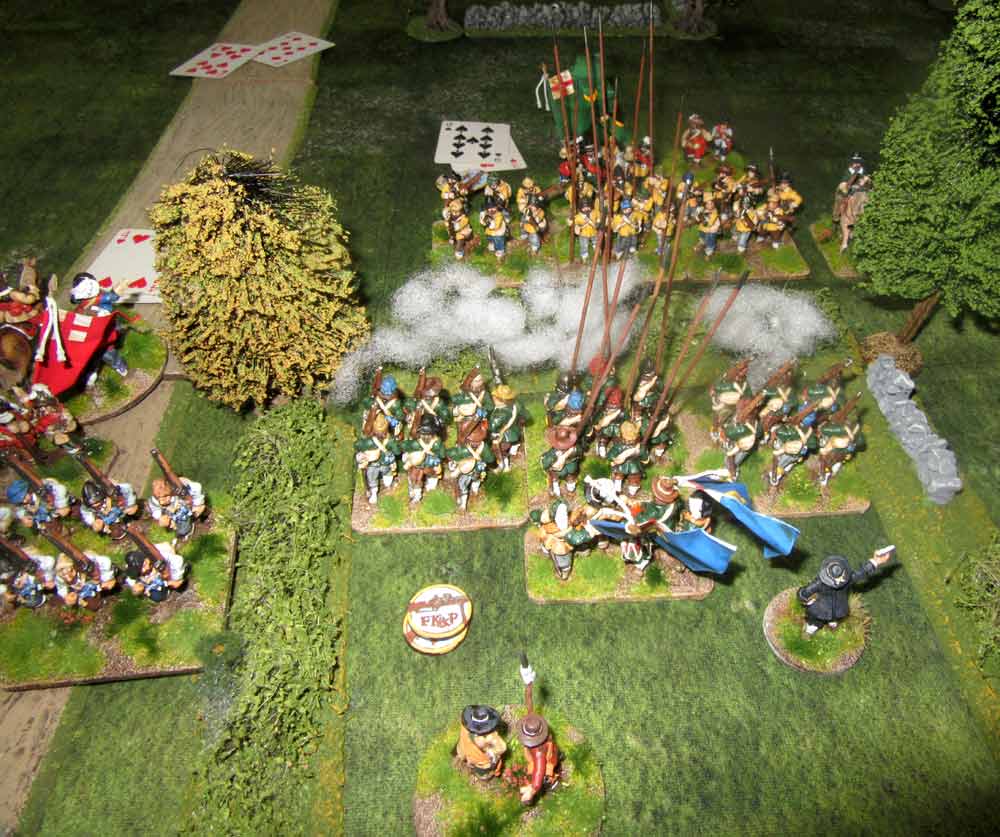 On the two wings the cavalry advanced, but didn’t really achieve too much. Gyles on the right was hampered by the presence of Mally’s dragoons, and for some reason worried about them getting around his infantry’s flank. So, thanks to a cunning deployment ruse, Sean plunked down a small marsh which the Parliamentarians hadn’t known about. This effectively stopped the Parliamentarian dragoons from advancing, but it also gave them something to hide in if Gyles’ cavalry tried to ride them down. 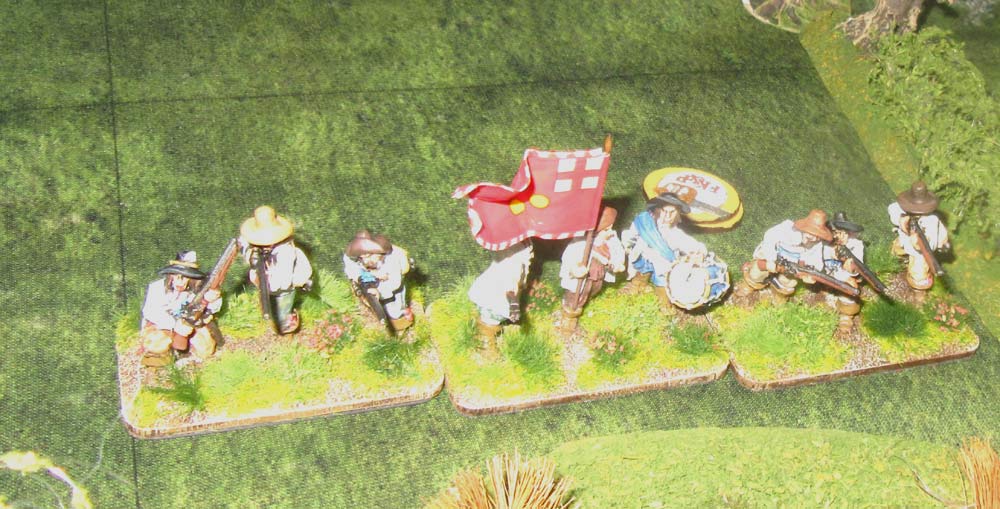 Over on the Royalist left Sean’s own cavalry charged mine – and rather surprisingly got bounced back. I was helped a little by my reserve – the Barnsley Trained Bands, who turned to their flank, and began firing into the closest Royalist horsemen. With Gyles’ first infantry assault out of steam while he reordered his ranks, and Sean’s cavalry doing the same, there was a short lull in the mayhem. 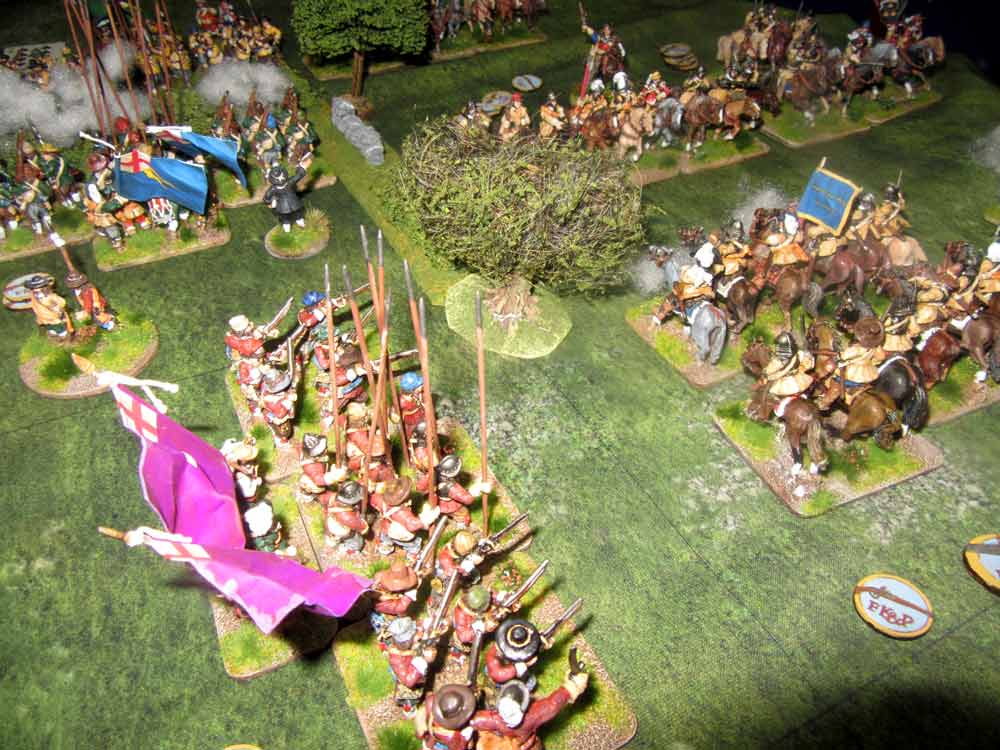 Still, Sean’s infantry were still game, and thy advanced again, both down the lane towards the guns, and trying to hack through the hedge into the salient. Yet again my guns failed to fire, so Sean charged them. Sensibly my gunners evaded into Cadeby just behind them, and the Royalists took the battery. By then though, Gyles’ two foot regiments were advancing too, to add to the pressure. 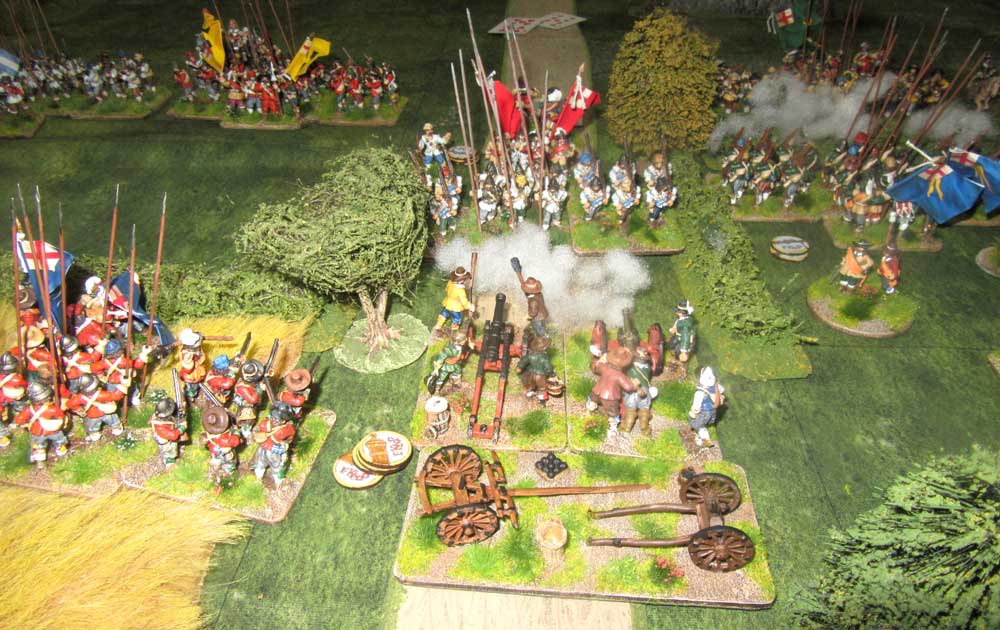 Mally though, was made of stern stuff. He stood his ground, chose his moment, and then his musketeers let rip. The result was, Arkwright’s foot who’d charged the guns were routed, and a phase later so was Barraclough’s foot, one of Gyles’ regiments. Huzzah! 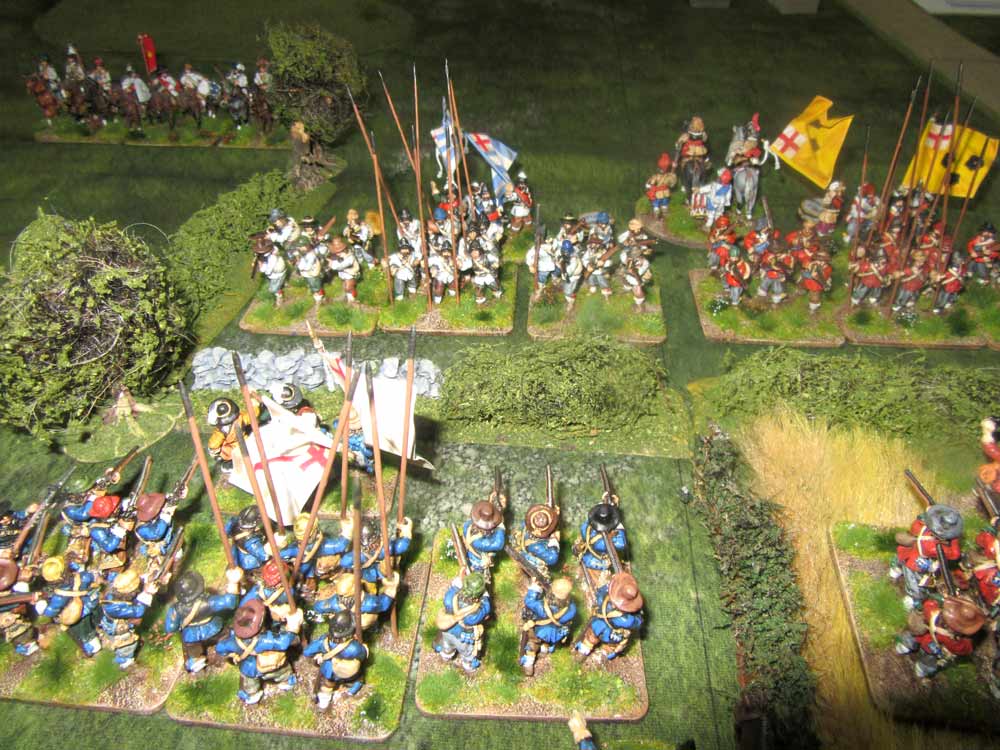 It wasn’t all one way though – in the salient Barraclough’s foot finally failed their morale test and fled, leaving Doncaster’s foot free to capture the ground. So, while we were still doing okay, thanks to them and the guns, a large hole had appeared in our centre. Still, at least we had three foot regiments left, to the Royalists’ two, and everyone still had their cavalry in the game… for the moment. 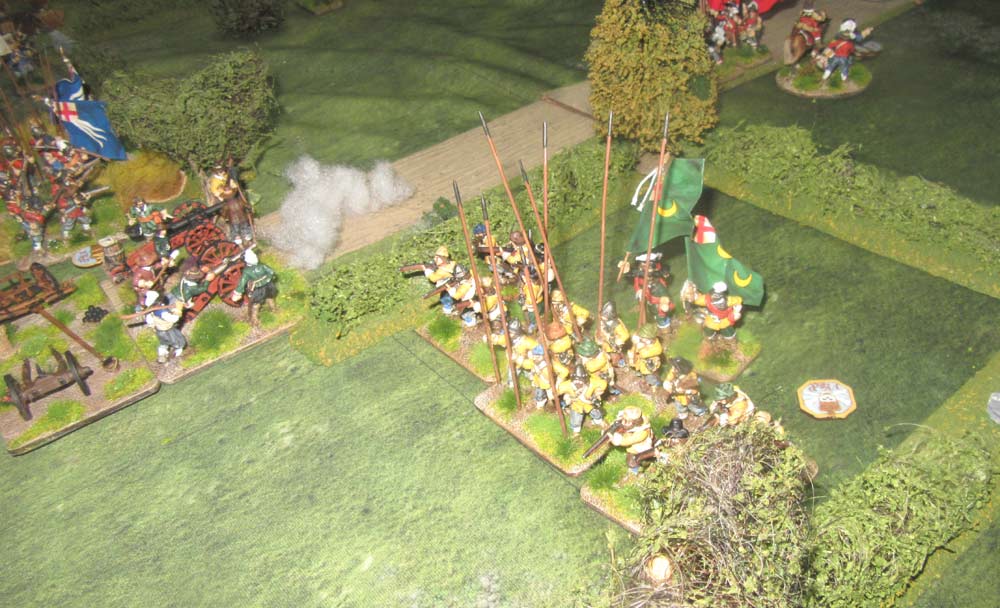 That’s when Sean unleashed his cavalry. He had three regiments – two seasoned and one raw. Facing them were two regiments of Parliamentarian cavalry – one seasoned and the other raw. of course, I also had those Trained Bands, but they had now turned to face Doncaster’s foot in the salient. Somewhat surprisingly, my two “Dutch style” regiments came out on top, and both leading Royalist regiments were forced to retire – one by musket fire from the Barnsley boys. 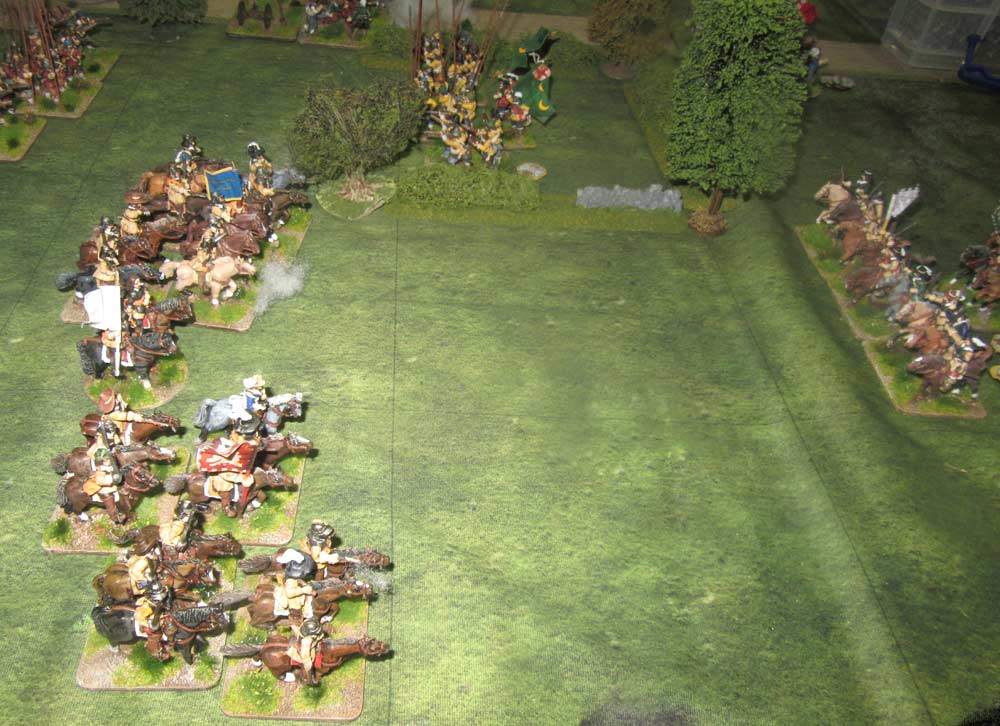 It was finally time to go over onto the attack. My two lumbering horse regiments advanced, and charged the disordered Royalist ones. On my left, Arkwright’s horse broke the already disordered Greenwood’s regiment, who duly fled the field. That caused a morale check which actually saw off the other seasoned Royalist cavalry regiment, Wentham’s, and disordered both the raw one at the back and Doncaster’s yellow-coated foot to their right. The result was that that the Royalists duly ran out of Victory Medals, and so victory was ours! HUZZAH!!! It was a close-fought game though – For King & Parliament games usually are – and as pretty as it was fun to play. 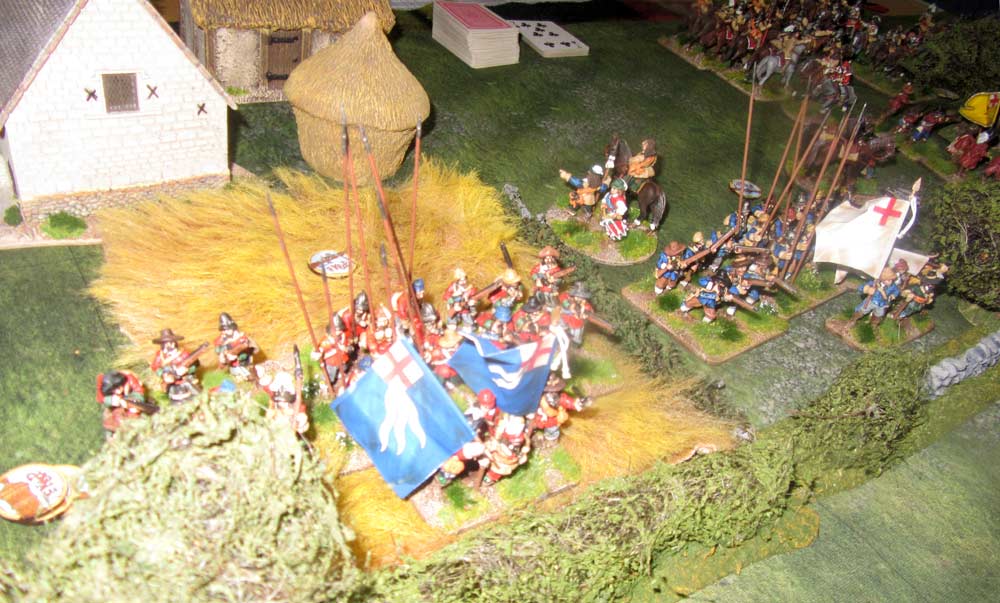