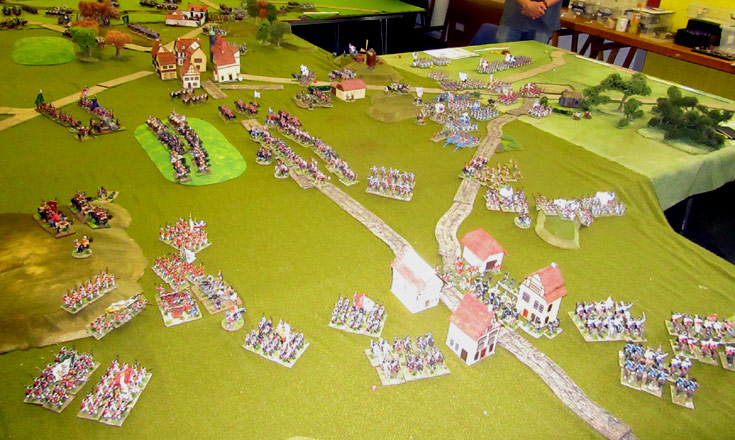 Once every now and again you take part in a wargame that becomes an instant “classic”. This was one of them. I’ve been playing games up in Kirriemuir with the League of Gentleman Wargamers for a bit over a decade, and through the years we’ve staged several memorable games. This though, was an extra special treat. We played a mammoth Seven Years War game, on two tables, one of which was so large you couldn’t reach the middle. We had thousands of figures, in three armies – French, Russian and Western Allied. Best of all though, the weekend-long game was organised by Charles S. Grant, using a modified version of the rules first published by his father back in 1971. So, this was a game that was a little out of the ordinary.

I have to confess, I’ve never played The War Game, although I’ve had a copy of the rules for years. Since they were published the rules have evolved somewhat, and Charles S. Grant published a new edition a few years ago. Even it is out of date, as the rules keep on evolving. That’s why Charles S. doesn’t like them being seen as “old school”, whatever that may mean. They might be venerable, but the rules are keeping up with the times.

I read them through before the game, and on the day Charles and his son Charlie (above) were on hand to explain the rules first developed by their father and grandfather respectively. It was a nice gesture on Fathers Day to see two generations of Grants playing a game first developed by an even earlier generation.

The premise was that the French were attacking the Western Allies on the big “Bruno” table, while on the smaller “Kretchnau” one (above), the Russians were trying to exit the table by fording a river and fighting their way past a French blocking army. Their aim was to lend succour to their British, Prussian, Hessian and Hanovarian allies on the big table.

We started off with just our small advance guards on the table. the plan was to scope out the terrain, and seize key locations before the main armies advanced into contact. Well, for us French players we didn’t do that well. By the end of the scouting and skirmishing aperitif game the Allies had seized control of several key towns, including Bruno and neighbouring Asche. Just as importantly, they controlled the high ground between the two villages, which really limited the ability of the French to deploy. Still, we were up for a fight.

When our main armies finally came I read my orders from Colin, our French CinC. They told me to take that high ground, so that’s where my cavalry brigade headed. The hill was occupied by eight squadrons of Allied cavalry – mainly British – and we had ten squadrons, including the Gendarmes. Easy, eh? The trouble was, Chris (playing the British commander) threw a spanner into the works by sending a unit of British light dragoons charging out from behind Bruno, which caught Colin’s Gendarmes in the flank. Then, when my own squadrons charged home, they were repulsed all along the line! It wasn’t exactly a glorious start to the battle…

Over on our right flank Mark’s Reichsarmee (fighting for the French) was holding its own against a Prussian force, although their deployment was a bit constrained by a river that sloped diagonally across the table. In between Colin and Mark though, was Dale. The poor fellow was targeted by Charlie, whose Prussians had their blood up. So, Dale spent the whole weekend fending off a Prussian blitzkrieg, with his army getting whittled away to nothing along the way. It was entertaining, in a horrific sort of way…

Far to the east, on the Kretchnau table, the French (played by John and Kevin) got the jump on the Russians, and managed to seal off the exits from the western table edge. the Russians (played by “the Putin brothers” Peter and James) tried everything from launching cavalry charges to harassing the French with their Cossacks. None of it worked, and in fact by the end of the game it was the French who sent troops to reinforce the Bruno table, rather than the Russians.

Back in the centre of the Bruno table Colin launched repeated assaults on Bruno itself, and eventually managed to force Chris’ British and their allies to the very southern outskirts of town. However, the debacle on their right meant that the final town clearing never took place, as French reinforcements had to be diverted to prop up the gap left by Dale’s collapse. For my part I did what I could to drive the Hanovarians from Asche, but they resolutely held their strongpoint throughout the weekend. In fact I spent most of the game fighting Steve and his Hanovarians, while lining up my infantry for the final assault on that pesky hill between Asche and Bruno.

In fact we packed in early on the Saturday evening, and the following day we all knew it would be an extra-short day’s gaming, as several players had long drives ahrad of them.  Still, mon Sunday morning I was determined to launch my infantry in an all-out assault. I actually moved off towards that elusive high ground, but what stopped me was the tabletop. I couldn’t physically reach the middle of the table, and besides, having just had a grenadier battalion ridden down by Hanovarian dragoons, I was leery of the massed cavalry waiting for me on the hill. So, I kept putting off the assault, and eventually I ran out of time.

Over on our right Dale had finally consolidated his remnants into a line behind the diagonal river, propped up by the Reichsarmee on his right. For his part Mark’s Reichsarmee had been doing well, crossing the river to kick over Bill’s Prussians, and generally punching above their weight. I was glad, as for the most part those were my Reichsarmee figures. I took a proprietorial delight in the fact that they were performing better on the tabletop than they ever had when I had command of them!

Even Charlies seemed to have run out of Dale’s troops to kill, and while he began sparring with the troops on Colin’s right flank, between the farm (above) and Bruno to the east, it was clear that there wouldn’t be an Allied breakthrough – or Russian reinforcements. By then though, over on my side of the table, I’d finally seen off the last of Steve’s Hanovarian cavalry, using the rump of my shattered brigade that assaulted the hill that morning. That blew a big hole at the far right of the Allied line, and I fed my fresh reserve French cavalry brigade through the gap.

That was when the leading French riders came upon another large body of horsemen approaching from the east. This turned out to be the head of the column of reinforcements sent from the Kretchnau table. These two forces combined had the potential to roll up the Allied right flank, and finally do what I’d been unable to do all game, and drive the British cavalry from their hill. That though, was where Charles halted the game. The French had definitely won on the Kretchnau table, but on ours we’d not made any real dent in the Allied line – and of course we’d lost most of Dale’s division of troops. As Charles put it, the flank breakthrough meant the Allies would have to pull back in the night, but by holding Asche and Bruno, and slaughtering Dale, they’d done well enough to earn themselves a minor victory. The real winners though, were the dozen wargamers who got the chance to play the game, and to experience The War Game for themselves. Thanks Charles, for making it happen. It was a real treat.