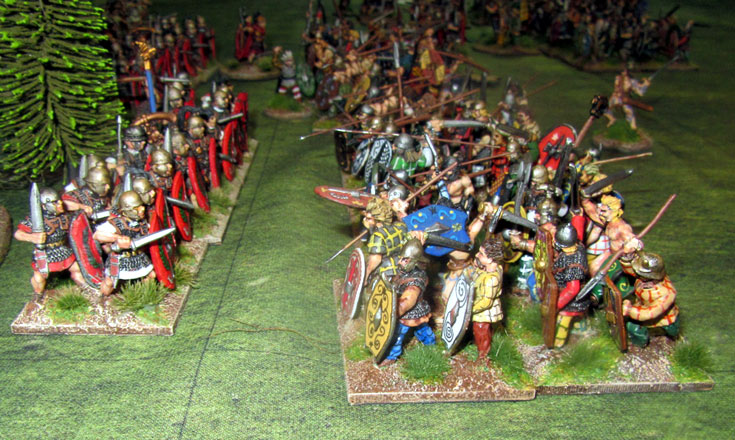 I missed out on a game last week, thanks to a very anti-social cold. In my absence, the guys decided to play an Ancients game this week, to develop their knowledge of the rules. So, I was duly asked to join in – and oh, could I please bring both armies too? In fact this was one of three ancient games in progress at the club – all using To the Strongest.

Our one was never meant to be a straight fight. The loose premise was that while Caesar was campaigning in Northern Gaul, he sent a two legion force to exact the surrender of Bibrax, the capital of the Remi. As the Romans approached the oppidum the Remi deployed in the plain in front of the town to give battle. They were outnumbered, at least in terms of units (9 to 14), but had the edge in numbers (250 figures on the table to 200 Roman ones). So, while the Romans were odds-on to win, the Gallic horde looked the more impressive army of the two. The game was fought on a 6×4 foot table, subtly gridded into 20cm (8″) squares.

The game began as the Romans deployed into battle formation and began a slow advance. The army was divided up between Peter and Michael, with the latter concentrating most on the cavalry massed on the Roman left wing. Campbell and I played the Gauls, splitting the force up between us, with Campbell running the two outnumbered cavalry units on our right. We figured there was no point in waiting around for the Romans to hit us. So, we decided to launch an all-out charge.

In fact the first clash took place on the cavalry wing. Campbell’s two units ignored the cavalry of Caesar’s Gallic allies (the Aedui) and smashed into the lighter Numidians beside them. The first Numidian unit didn’t manage to evade in time and was ridden down,. but the second managed to get out of the way. The Remi horse tried and failed to face the flank of the Aedui cavalry, and then ran out of moves.

Over in the centre my warbands smashed into the Romans, ignoring a rather ineffective shower of pila as they came in. Unfortunately my aggression wasn’t rewarded. My hacking didn’t achieve much, apart from locking the two sides in combat, with the odd Roman and Gallic unit suffering a single hit. In these rules the Romans can suffer two hit points before breaking, while the Gauls can take three, due to being “deep units” (ie with double the numbers). So, with the Roman reserves unable to move up due to the press of men in the way, both Peter and I braced ourselves for a hard slog.

In fact this slogging match went on for the best part of 90 minutes – with breaks for trips to the bar in between. Neither side seemed to gain much of an advantage. We both had successes though – first I broke a Roman cohort, and the next turn Peter broke one of my warbands. My one unit reserve had moved up on my left, but Peter spotted this and matched it with his own reserve cohort. This meant the melee had spread to cover much  of the table. We mightn’t have been achieving much, but it certainly looked good!

Over on the Gallic right though, things were starting to unravel. The Aedui had turned their horses round, and managed to charge the Remi cavalry in the flank. To their front, the Numidian unit returned to the fray. adding the weight of their javelins to the carnage. Soon one of the Gallic cavalry units broke and ran. Not to be outsmarted, Campbell led the other through the enemy lines, and set his riders up for an assault on the Roman camp. This easy victory wasn’t to be though – instead the Gallic unit got routed by a shower of Numidian javelins.

That meant our right flank was now wide open. It also meant the Romans were starting to rack up victory medals. You see, each  army gets a number of victory medals, based on its size and composition. You lose some when a unit breaks – so two cavalry units gone meant we lost four medals. When the medal pot is empty, you lose the game. Simple but effective.

Back in the centre things were starting to reach  a climax. Both Peter and I lost another unit – a Roman cohort and a Gallic warband. We were outnumbered though, at least in terms of units, and so this trade-off wasn’t a good thing. The Gauls now had four warbands in the fight, and no cavalry, while the Romans had six cohorts, and all their horsemen. Campbell worked wonders trying to prop up his wing, but it was pretty clear there wasn’t much we could really do. I did bring down two more cohorts though – bringing the tally to four – the equivalent of one full legion, or half the Roman force. By then though, it was too late to turn things around.

One of my key warbands had been shrugging off all its hits for most of the game. Suddenly its luck ran out, and it broke and ran. That left me with two warbands on my side of the table, while Campbell had another isolated one on our centre-right. Everywhere else the Romans were rolling forward, and across much of the table there wasn’t anything between them and our camp, worth a whopping six points. That was the point we called it a day. The Romans had clearly won, but they’d paid a price – losing half of their legionaries. The Gauls though, were a completely spent force.

So, that was the Battle of Bibrax, fought outside the oppidum that is now Laon. No doubt the Romans and Gauls will battle it out again, but first I need to paint another couple of 36 figure Gallic warbands, and some cavalry and javelinmen to back them up. Everyone thoroughly enjoyed the game though, which was fast-paced and fun. It’s frustrating when your cards don’t turn up, but the mechanic of drawing cards to hit, save and shoot is really good at keeping the tension going. It certainly makes for a really enjoyable game.

4 Responses “The Battle of Bibrax, 57BC”