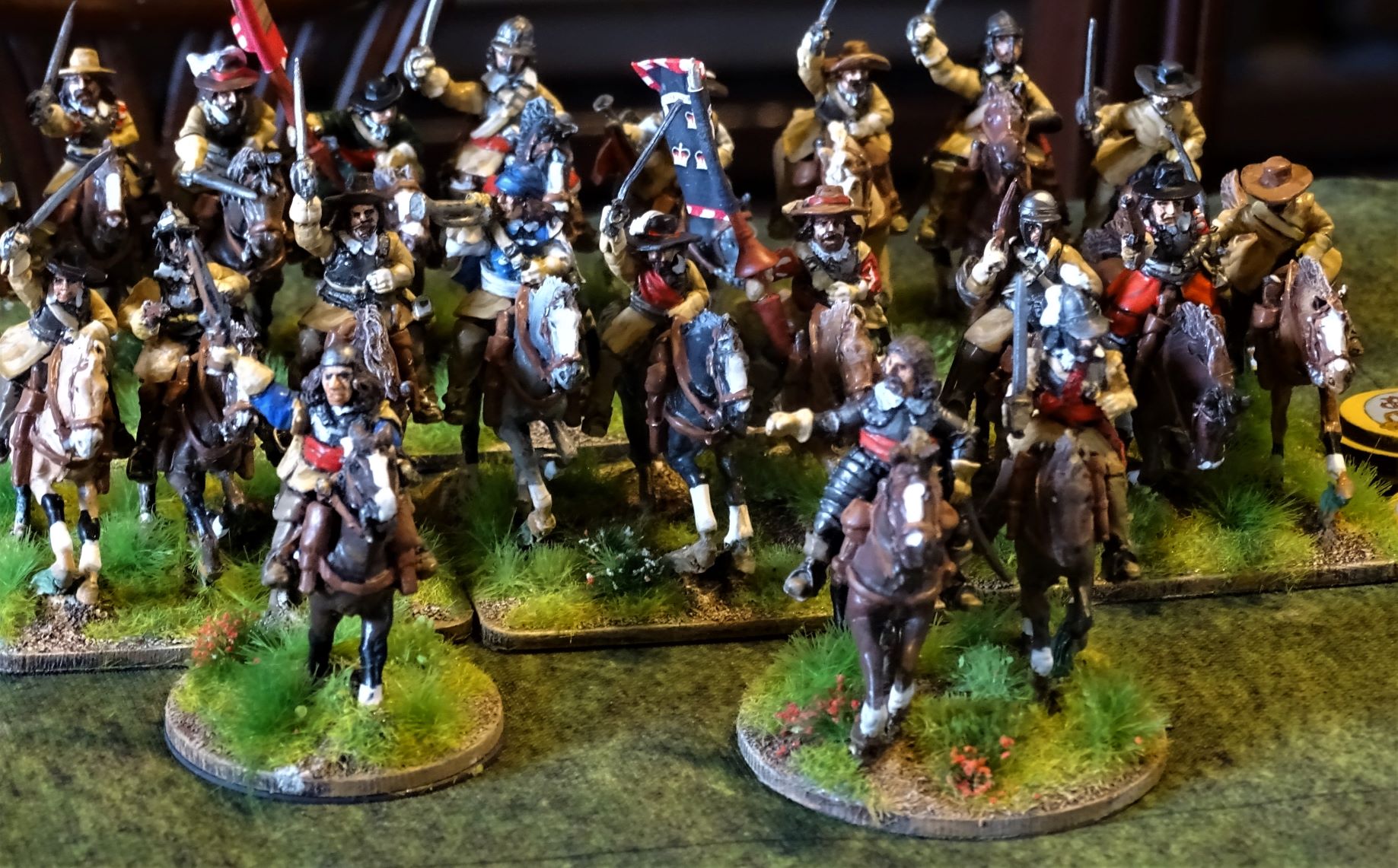 The English Civil War, For King and Parliament, 28mm

Here’s a thing. I haven’t played an English Civil War game since lockdown first began in early 2020. It was the last “proper” wargame I played – a weekend game played somewhere other than a farmhouse kitchen. Since then I’ve re-based my figures, and touched up quite a few that needed it, and painted up more units. So, this week I was particularly keen to host an ECW game here at home – a sign that things might slowly be improving.

It was a small game though, as this was very much a learning curve – I was the only one of the six wargamers who’s played the rules before. Still, all but one were familiar with To the Strongest, which is pretty much the same system. You won’t find the Battle of Armthorpe in the history books-  this was a fictitious affair, with the Royalist forces of the Earl of Doncaster fighting the Earl of Rochdale’s Parliamentarians. It pitted two matched forces, each with three foot regiments and three or four cavalry regiments per side, and was played out on a 6×4 foot table, covered in a 20cm (8″) squared grid. 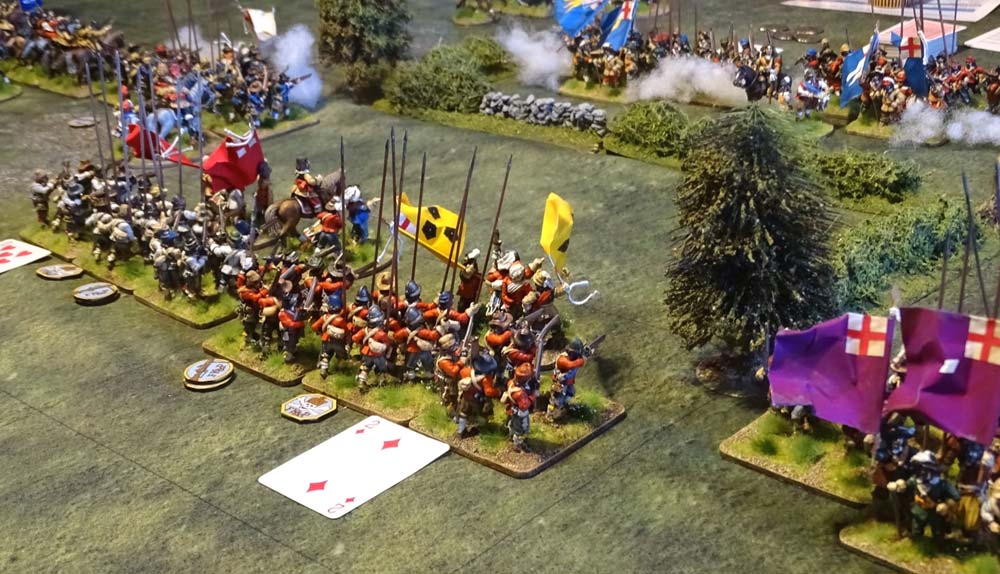 In this game, Sean, Lindsay and I played the Royalists, and Gyles, Mally and newcomer Bob the Parliamentarians. All the figures were mine. The deployment was standard, with the foot in the middle and the horse on the wings. The Parliamentarian horse was formed up in the “Dutch” style, with three 12 figure units, while the Royalists had four 9 figure units, deployed in the “Swedish” manner. 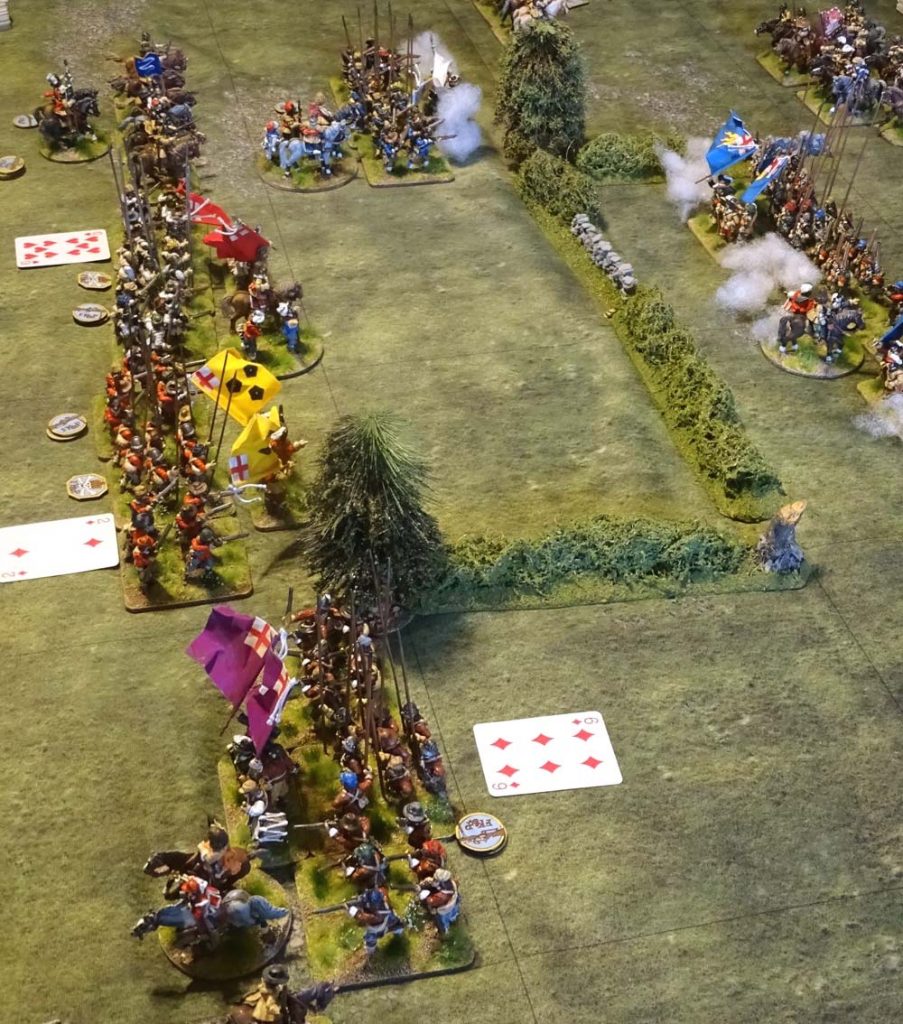 The game began with both sides cutting cards, and the Parliamentarians going first. The advance of both sides was fairly cautious, with Sir William Boothroyd’s Parliamentarian foot (commanded by Mally) being the first to reach the hedge dividing the field, so giving them the benefit of cover. Percy Barraclough’s Royalist (my guys) advanced to meet them, and we began a short range exchange of musketry, which didn’t really achieve anything. The cavalry wings though, were both edging forward, so a clash there was inevitable. 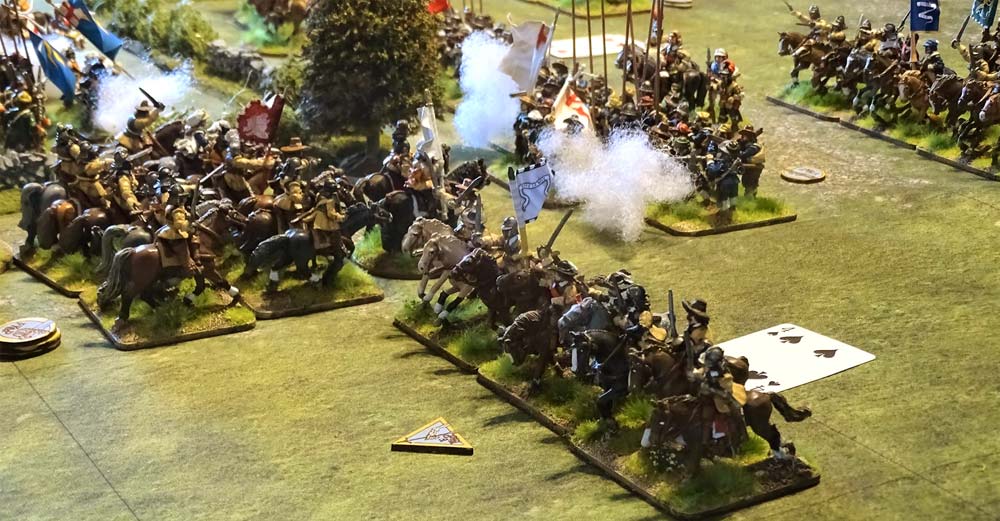 It began on the Parliamentarian right. Gyles (leading Col. Arkwright’s two cavalry regiments) rolled one forward to fire their pistols at the enemy horse, commanded by Sean. That only annoyed them, and Sean’s leading regiment – Greenwood’s – promptly charged the Parliamentarian horse and routed them. First blood to the King. Greenwood’s horse pursued – and kept on riding towards the opposite table edge. Meanwhile I was having the worst of the musketry duel in the centre, while on the Parliamentarian left, Bob’s sole cavalry  regiment (Harrison’s) decided to charge Lindsay’s leading regiment – Hartley’s, and after a brief melee they disordered it.

Back on the Parliamentarian right, Gyles’ second regiment – Thakrey’s horse – were raw, and seemed content firing pistols at the closest Royalist foot. Then though, as Greenwood’s pursuing cavalry thundered past, Gyles turned his cavalry around and charged the Royalist horsemen in the flank. They broke the Royalists, and occupied the ground. Sean saw that, and sent his second regiment – Longfellow’s horse into the Parliamentarian flank in their turn. This clash of two raw regiments ended with the last of Gyles’ two cavalry regiments routing off the table. Sean should have been pleased about that, but his own horse promptly left the field too, pursuing enemy stragglers, and searching of a baggage train to loot. So, that accounted for all the cavalry on one flank! 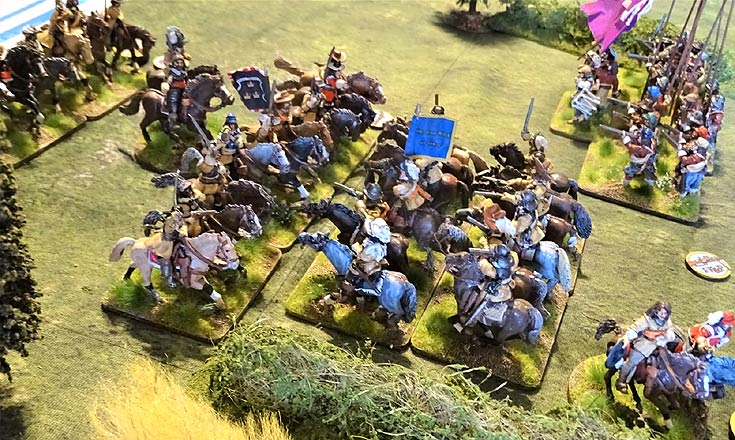 Over on the other side, Lindsay and Bob were still sparring it out, with Bob’s sole regiment (Harrison’s horse) supported by the war Scunthorpe Trained Bands. In the struggle Bob’s horsemen charged again, and after a brief fight Hartley’s horse was routed. That still left Lindsay with a second regiment though , but it was disordered when its companions bolted, and so Lindsay pulled it back. 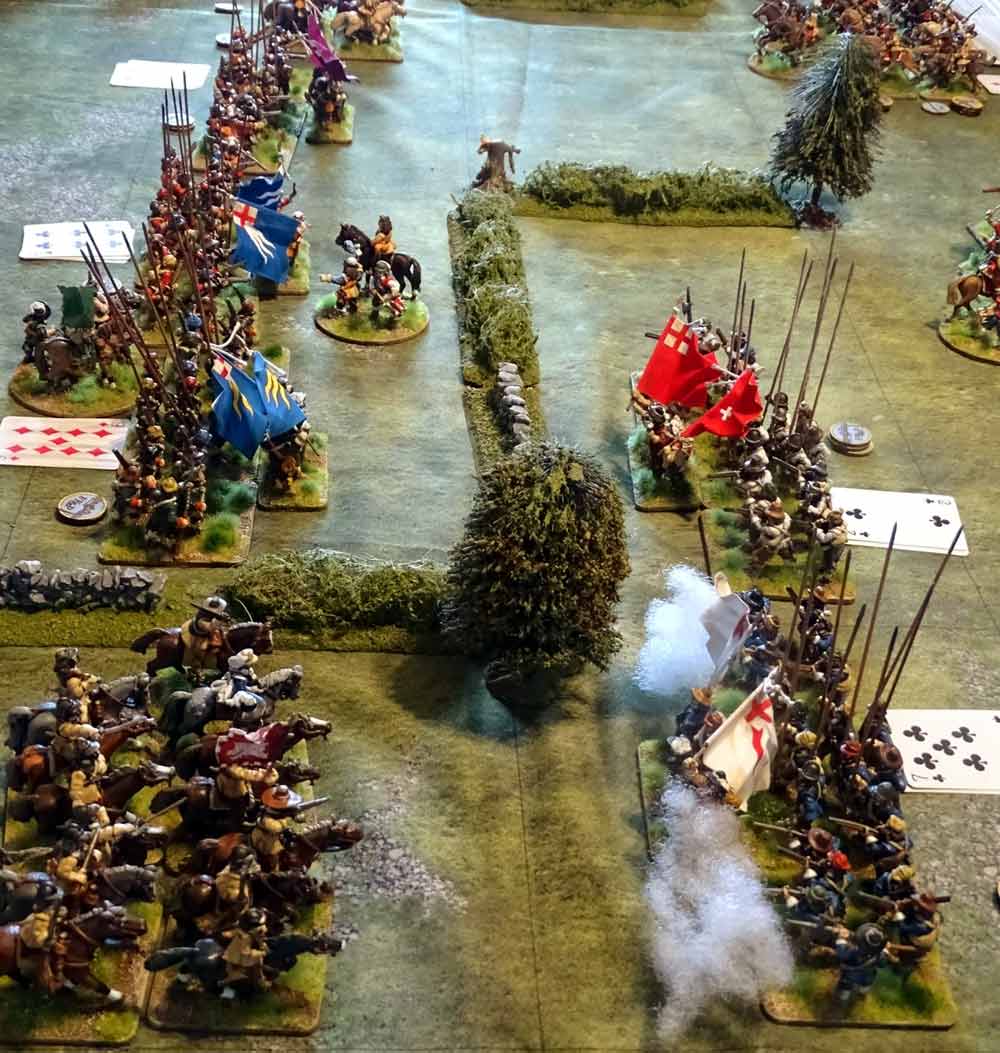 In the centre the demise of the Parliamentarian right flank cavalry let me advance Doncaster’s foot to a hedge line on the right flank of the Parliamentarian foot. No end of shooting cards, managed to produce a hit. by then though, my other two foot regiments had been disordered by enemy musketry, and had pulled back a little to reform. The closest unit to Bob’s Scunthorpe Trained Bands was my own raw militia unit – the Barnsley Trained Bands. 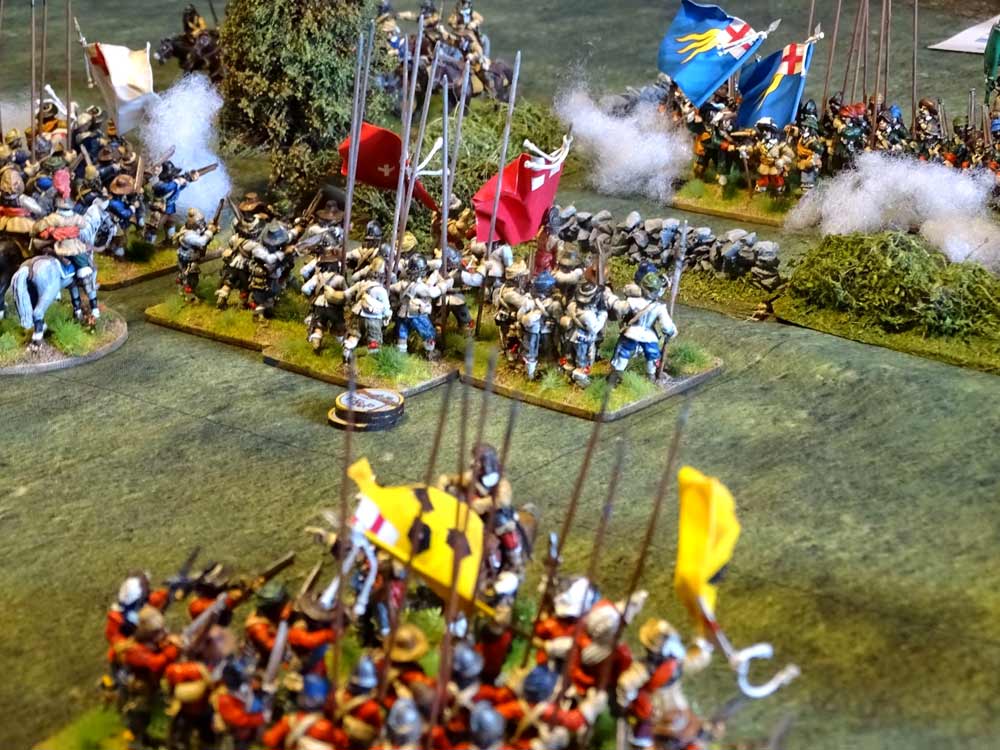 The Barnsley militiamen turned to refuse the flank – leaving the two rival trained bands facing each other off. In the centre the infantry fight continued, but by now it had pretty much fizzled out into an ineffective firefight. The battle then, was going to be won on the Parliamentarian left – or Royalist right.  That meant it was up to Lindsay or Bob to win the game for King or Parliament! 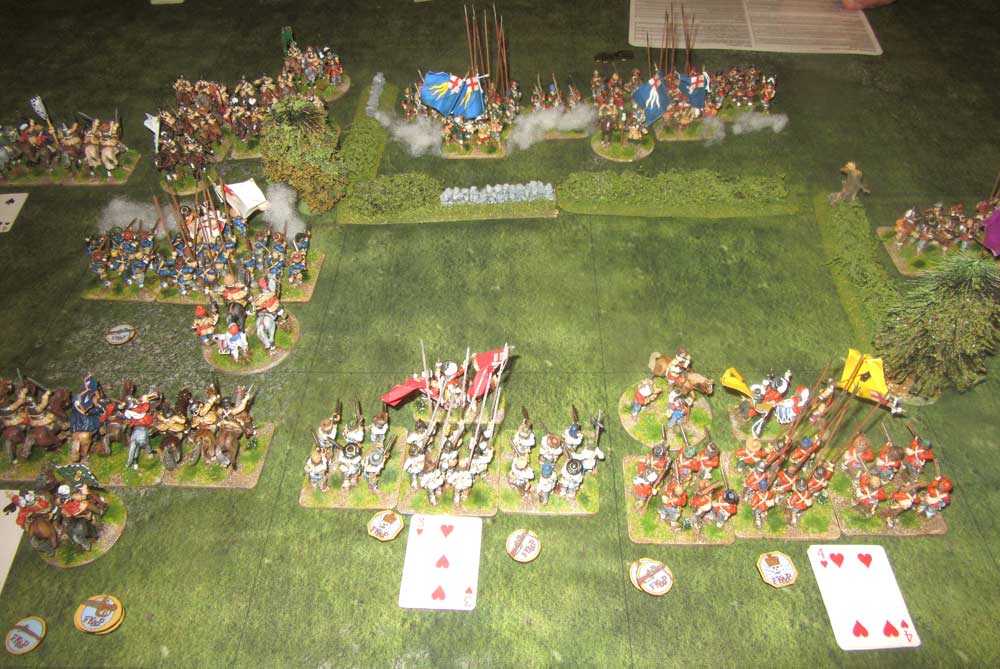 They both only had one cavalry unit to pull it off too, supported by foot . In For King and Parliament the more units you lose then the more victory medals you  have to surrender. When the pot is empty then you’ve lost the game. By that stage the Royalists had five medals left, and Parliament three. So, in theory all we needed was to destroy one three point unit of enemy horse or foot to win the game. Lindsay’s remaining cavalry of Atkinson’s regiment were disordered, but  Colonel Hartley turned them around, and charged into the flank of the Scunthorpe Trained Bands. An amazing run of cards followed, which saw Bob’s Parliamentarian foot ridden down. 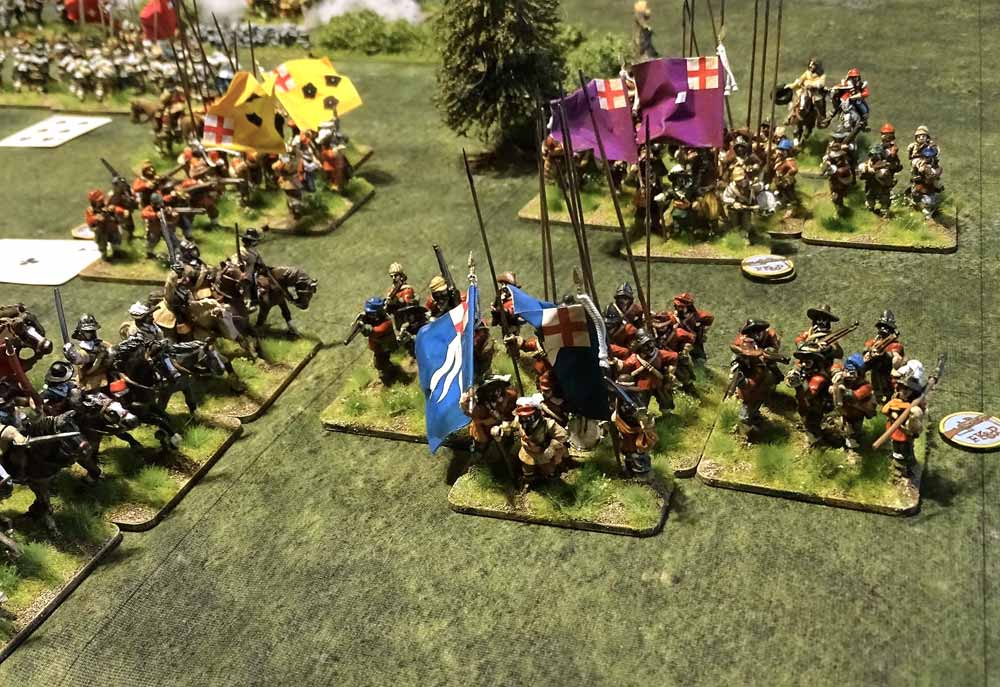 So, that ended the hard-fought game – a Royalist victory! All 11 Parliamentarian victory medals had been surrendered, while the Royalists still had five of theirs left. In fact the game could have gone either way – something we’d come to expect from To the Strongest. So, it was nice to see the similar mechanism working the same here. Above all it was a very enjoyable game – both pretty to look at with all those flags, and full of entertainment for the six players. Lindsay is already painting up Scots Covenanters, and with luck one or two of the others will raise a few regiments themselves. I too will be adding to my  wee armies before the next game. 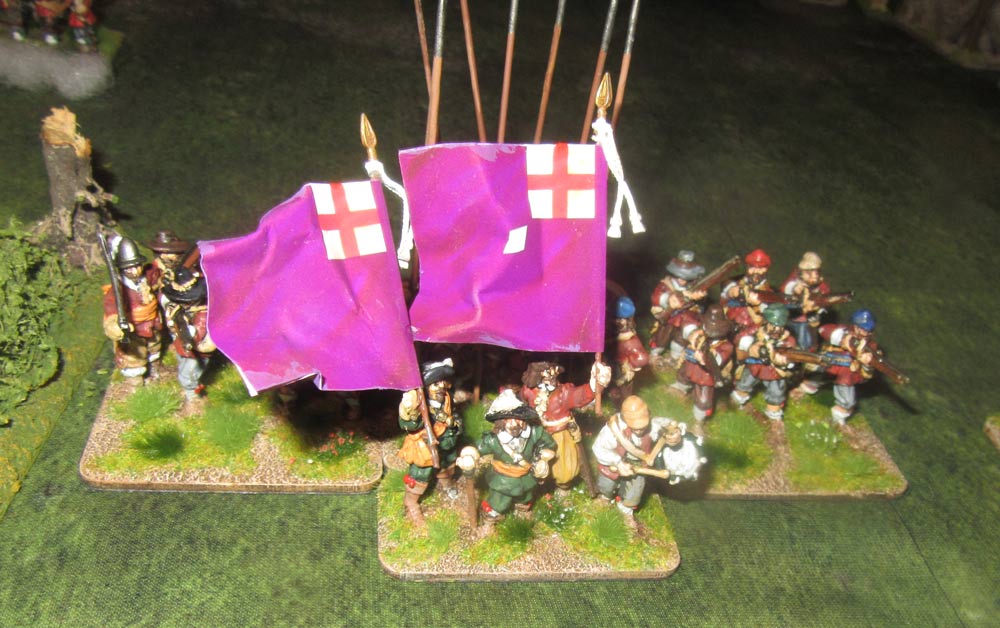