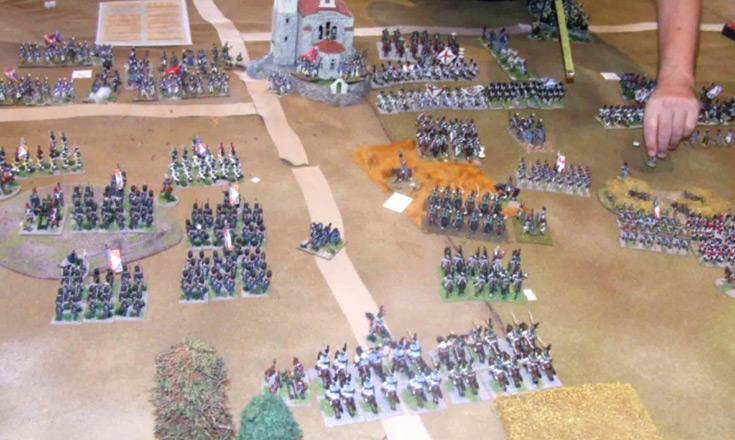 First off, let me apologise for the quality of the pictures. My camera and I were clearly having an off day. Now, this was a big weekend game, played out by the AB1 group of Edinburgh wargamers. We played it in a hotel in Lundin Links in Fife, about an hour’s drive from Edinburgh, on the north shore of the Firth of Forth. It was a great venue, made even better by the spectacular views across the Forth from the hotel windows. It was such a nice sunny Autumnal day that between turns most of us gathered outside to drink, chat and admire the scenery. it was almost a chore to head back inside and play the next turn!

The game was a fictional one, set after the Battle of Salamanca in July 1812, during Wellington’s move from Burgos to Madrid. It centred around a defensive battle, fought by Wellington’s outnumbered army outside the town of Alba de Torres, to the south-east of Salamanca. It was played out on a very long thin table – 24 feet by 6 feet, with the Allies deployed on the table at the start, and the French marching onto the table. The map below has north at the right (marked N). My own Anglo-Portuguese Division (under General Packenham) was deployed in and to the south of Calvariza, and I had General D’Espensa’s Spanish Division to my left (north), and another Anglo-Portuguese Division under General Clinton to the right (south). Two more British Divisions commanded by Generals Leith and Cole were deployed further to the left, stretching across the River Tormes as far as the village of Cristoval. I don’t know what it is with wargamers, but however long a table you use the players will deploy all the way to the edges of it. This meant the battle would be a head-on clash, with no fancy flanking moves. While this made for a pretty dull set-up, with no scope for dashing outflanking marches or defences in depth, at least it meant that everyone was thrown into the fighting right from the very start.

While Joseph Bonaparte’s French outnumbered the Allies by 3:2 in infantry and guns and 2:1 in cavalry, not all of their troops entered the table on the first turn. Columns were still marching towards the battlefield, and would continue to appear throughout the two days of gaming. By the end we worked out we’d placed around 4,000 figures on the table, but what with casualties and reinforcements, there were never more than about 3,400 there at any one time. It certainly looked spectacular, and on a table with more depth and custom-built scenery it would have looked truly inspirational! Anyway, the French attacked with 20 brigades on the first turn, with General D’Erlon’s force appearing north of the river, while to the south of it Marshal Soult entered at Huerta, General Clausel appeared opposite my troops at Calvariza, and Marshal Jourdan’s Corps marched onto the table around Gonzalo. Another seven French brigades were marching to the sound of the guns. The scene was set for a bruising hum-dinger of a battle, with the Allies desperately trying to hold their ground in the face of this determined French onslaught.

As expected the French pinned the Allies all along their front, while launching their main assaults against the flanks of the Allied line. North of the river D’Erlon’s French (actually in this game most of them were Poles) drove back Cole’s Division, taking advantage of their overwhelming force of around 3 to 1 in that part of the battlefield. While one British brigade was isolated and overrun, another withdrew across the ford – the only crossing point on the river. The withdrawal was covered by a gallant charge by British light dragoons, which kept the Polish lancers at bay for several turns. That left a third brigade, which holed up in Cristoval. The French spent all of Saturday trying to capture the place, but the British held their ground, helped by the timely arrival of a brigade of reserves. By the end of the first day of gaming the French were no closer to rolling up the Allied left flank than they had been on Turn 1.

The fighting was just as heavy on the Allied right flank. throughout the day waves of French crashed into the thin Allied line – two brigades of Portuguese infantry, and one British brigade. Fortunately for poor General Clinton’s hard-pressed troops Wellington sent the bulk of the British cavalry to help him stem the tide. What followed was a swirling, chaotic “stramash”, with charges, routs, smashing victories and gut-wrenching defeats in equal measure for both sides. The fighting was still going on in this fashion on Sunday afternoon, after a full day and a half of gaming! The bottom line though is that the Allies held their ground, despite the loss of the Household Cavalry, and the loss of many other fine units in what was the biggest meatgrinder of the battle.

In the centre the French attacks were half-hearted – after all, the main action was taking place on the flanks. The stripping of the French centre to bolster the flank attacks meant that the Allies almost enjoyed parity in numbers with the enemy, and so the Allied line was never truly threatened for much of the weekend. In fact the Spanish even launched a major counter-attack, which at one stage looked as if it would split the French army in two. More by luck than judgement the self-appointed King Joseph held on by shoving reinforcements into his centre – troops which might otherwise have tipped the balance on the flanks. If any player deserved a “man of the match” award it was John Glass, who commanded the Spanish. His attack was a fought in the spirit of the 16th century heyday of the Spanish Empire rather than in the style of the Spanish of the very early 19th century.

All in all it was a great weekend of gaming, and the Old Manor House Hotel was a superb venue. We used a large function room which easily accommodated our table, and the bar staff kept running back and forth with drinks orders, to help the day along. While I have some reservations about using Black Powder for Napoleonic games, this worked very well, given the sheer scale of the game, and all of the players seemed to enjoy themselves tremendously. This was due in part to Bill Gilchrist’s latest crop of house amendments, which he’s posted on his website.

In the end the “neutral umpire” Bill Gilchrist (who also doubled as Marshal Soult) declared that the game was a draw, but one which slightly favoured the Allies. Everyone else though – even the most fervent supporters of General Bonaparte  – saw the game for what it was – a pretty clear Allied defensive victory, and another feather in the cap for the Iron Duke!