This week we were off to Greece – well, Thessaly – in a non-historic clash between a small Late Republican Roman force, and an unholy barbarian alliance. These ruffians were made up of Galatians and, somewhat surprisingly, Dacians. Actually, Mally had been painting some Dacians – two warbands and a unit of heavy cavalry – so he fielded them. Lindsay, on the same barbarian side, had painted up a unit of Ancient British chariots. What the heck though – they were Galatians for the day. Otherwise we used my Gauls and Romans. 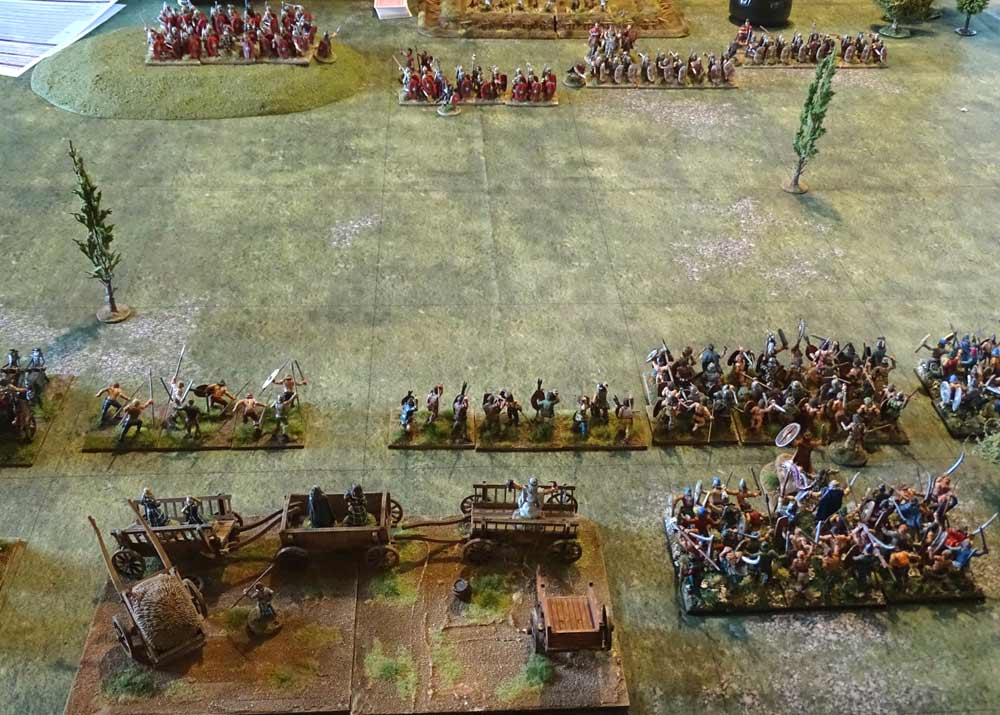 The game was played on a 6×4 foot table, with a small Roman camp at one side, and a Galatian wagon fort on the other. As we were using To the Strongest the battlefield contained a grid of 20cm squares, although you barely noticed them. A couple of small hills and woods completed the layout of this largely open table – a perfect spot for a small Ancient battle. Mally and Lindsay played the Dacian-Galatian alliance, while Sean and I took command of the Romans.  As they were attacking the Galatians went first.

Not surprisingly the game began with an all-out charge. A mass of barbarians sweeping towards you in an interesting sight, but Sean and I kept reasonably calm and decided to take the charge at the halt. Actually, it didn’t hit all along our line at the same time – the chariots led the way on the barbarian left flank. After that the attacks pretty much rippled down the Roman line from right to left. 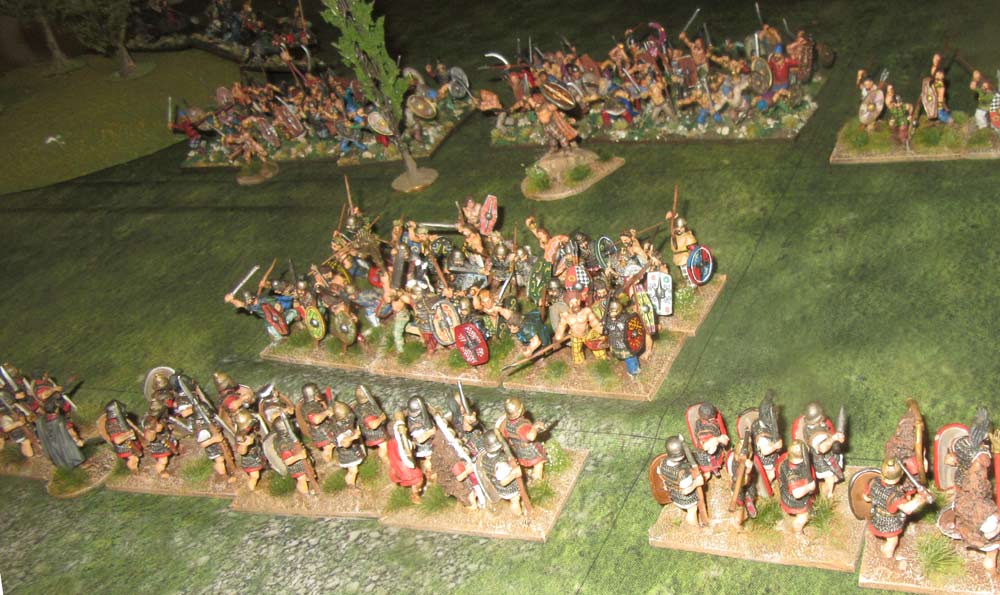 The chariots actually bounced back, leaving the Roman cohort they charged sitting pretty on top of the low hill. That’s when things went wrong. With the chariots disordered I got cocky, and tried attacking the Galatian unit on my right. Not only did the attack fail, but the Galatians then hit me, causing a disorder. Lindsay sensibly pulled her chariots back and sent in another warband to attack the Roman cohort in the front. 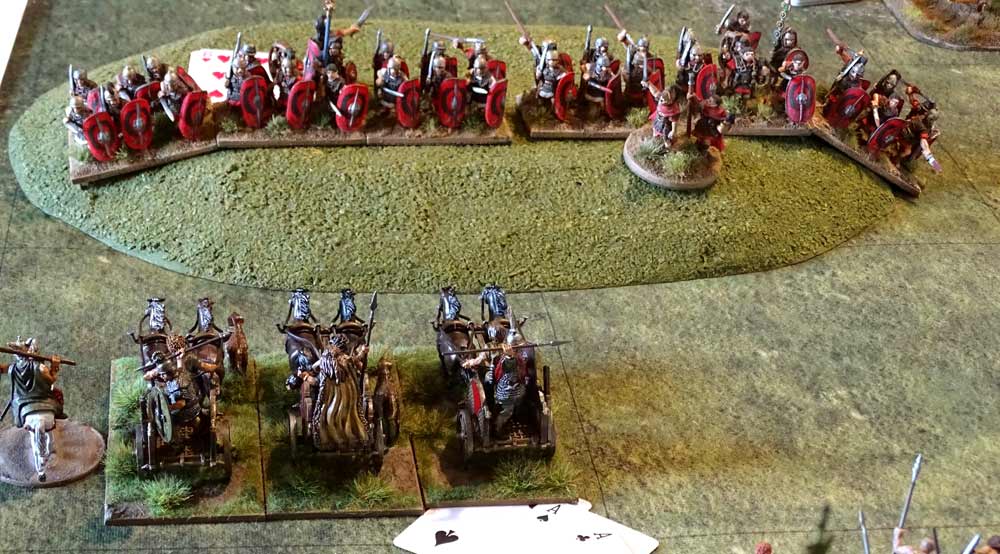 Meanwhile I tried to redeem the situation by fighting the first warband. It didn’t work. The attack failed, and when they hit down they broke my cohort. That was a disaster, as it left the hill above the Roman camp completely undefended. So, the first blood went to the barbarians. I had a reserve cohort though, and managed to move it up onto the hill, before the Galatians could get there. Still, that reserve cohort was now heavily outnumbered, and while one unit advanced against their front, another worked its way around their flank and rear. 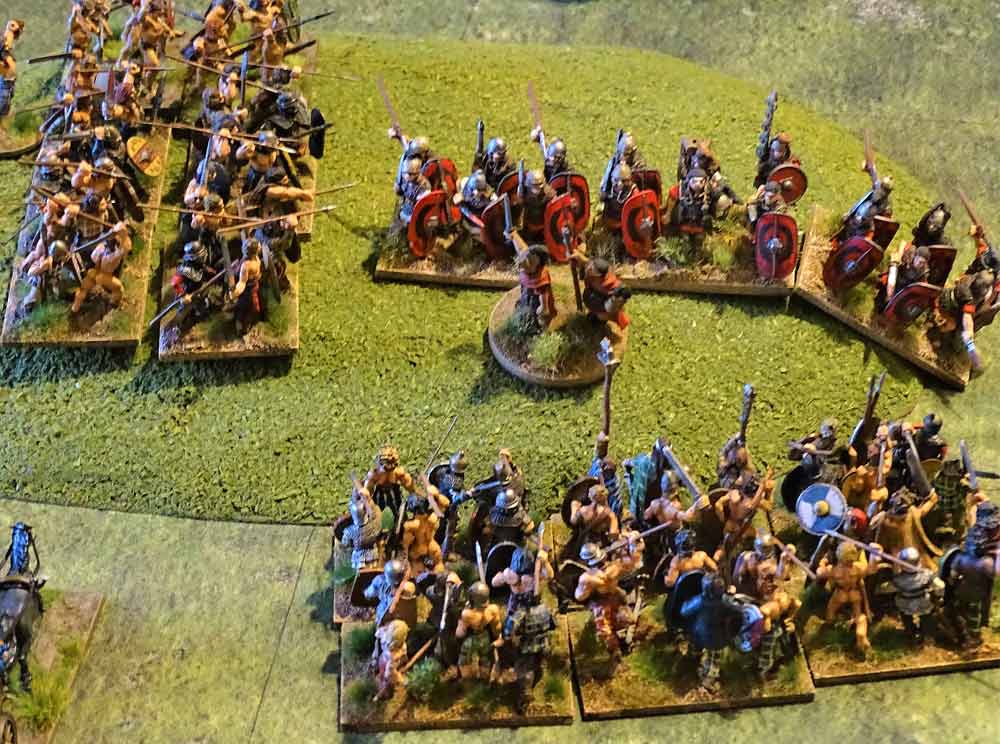 The chariots, fully rallied now, held off waiting for their moment too. Things were looking dangerous. Meanwhile on the other side of the table our unit of Spanish cavalry and its Galatian opponents kept their distance from each other for the first few turns, as both Sean and Mally waited for the right moment . So, the action now switched to the centre. 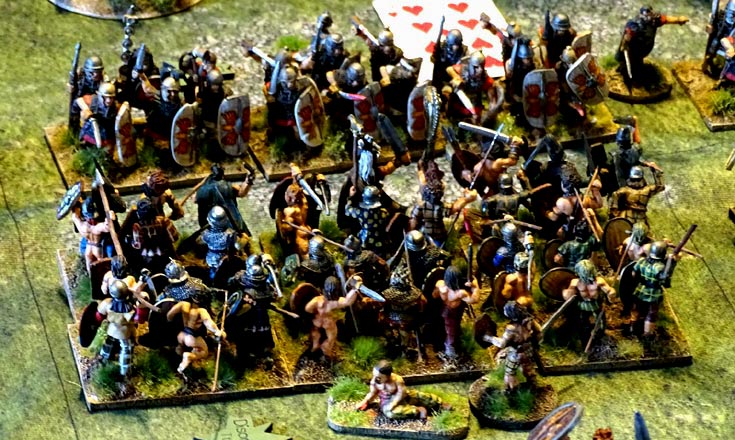 There were now just four Roman cohorts left – two commanded by me, and two by Sean. Plus, we had a unit of Balearic slingers in the camp, and those Spanish cavalry out on the far left. The barbarians swept in with two Dacian and one Galatian warband. All our pila didn’t achieve anything, but still, when the two sides clashed the Roman line held. The battle then degenerated into a pushing and stabbing match, with Sean just about holding his own against the heavy Dacian pressure. 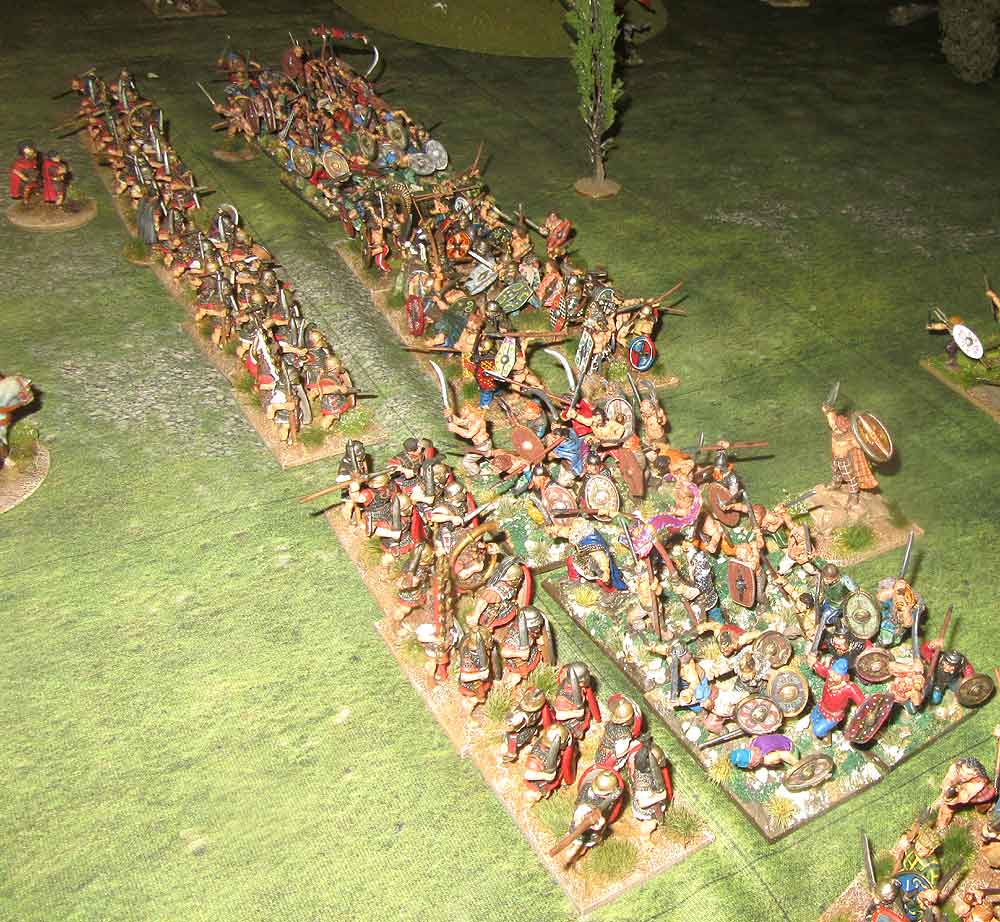 Then, slowly, cracks began to appear in the barbarian line. The Dacian unit on the far right was first to break, having taken three disordering hits. Mally tried to save the day with his cavalry, but their charge was halted by the now unengaged Roman cohort. That bought time for the Spanish cavalry to hit the Dacian horsemen in the flank. They broke and ran. 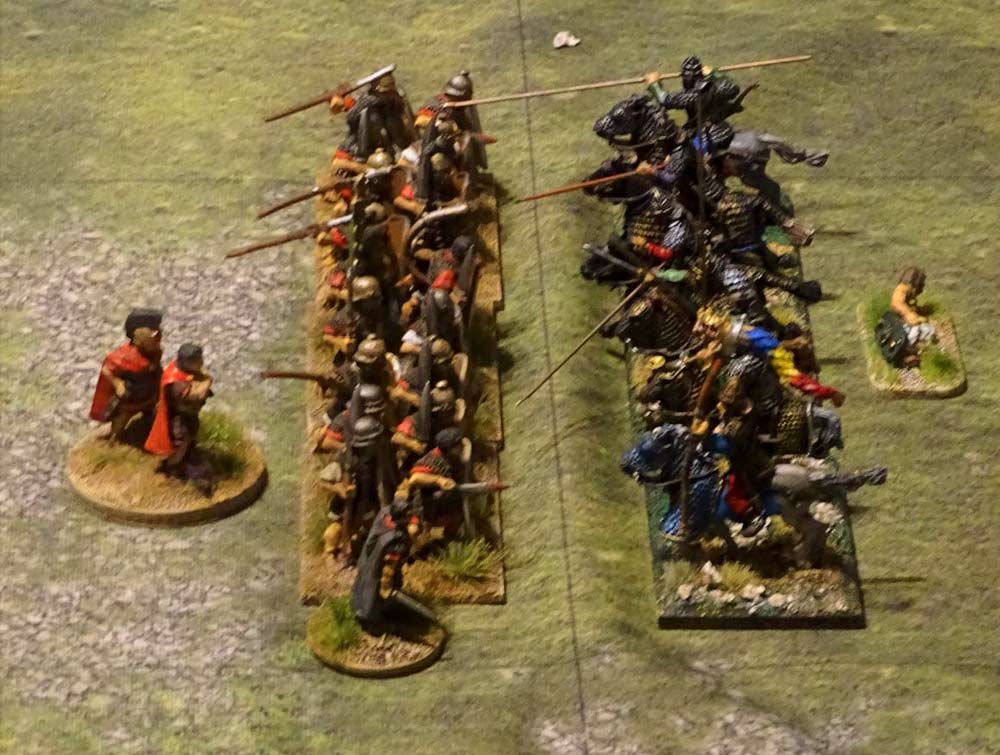 That freed up the victorious Roman cohort, who now wheeled round to threaten another Galatian warband in the flank. Before the attack went in though, the Roman cohort fighting them managed to get a third hit on the Galatians, and this second warband broke and ran. We were now racking up Victory Medals. All we needed was one more good push. 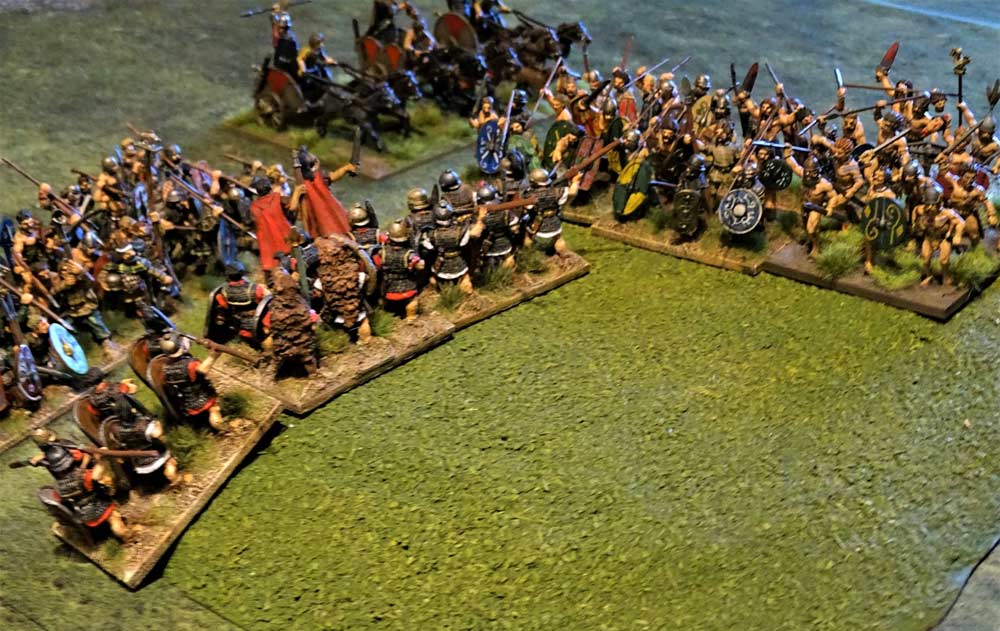 Over on the hill though, things weren’t going so well. All that saved my reserve cohort was Lindsay failing to activate her flanking warband – twice in a row! I pulled back and refused my flank, while sending the slingers up in support. It looked like the barbarians were falling apart over on the far flank – all I had to do was to hold on until their whole army broke (or ran out of Victory Medals). 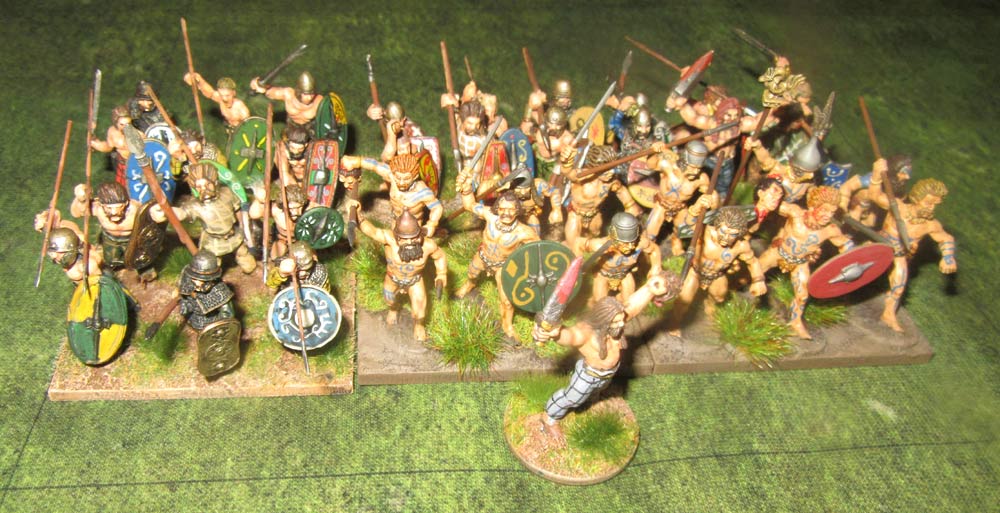 In the end the Galatian warband charging my own left-hand unit also reached three hits, and it broke. By then Sean had moved one of his cohorts onto their flank, while another, supported by the Spanish cavalry, was threatening the barbarian light troops at the rear. So, with their pot of Victory Medals now empty, the Dacians and Galatians conceded the game. Actually, by then there weren’t any Dacians left, and the Galatians in the center had largely been wiped out. Lindsay was still unbroken, and her mob withdrew in reasonably good order. So –  Roman victory. It could have gone either way though, and at one point it looked like it would do just that! 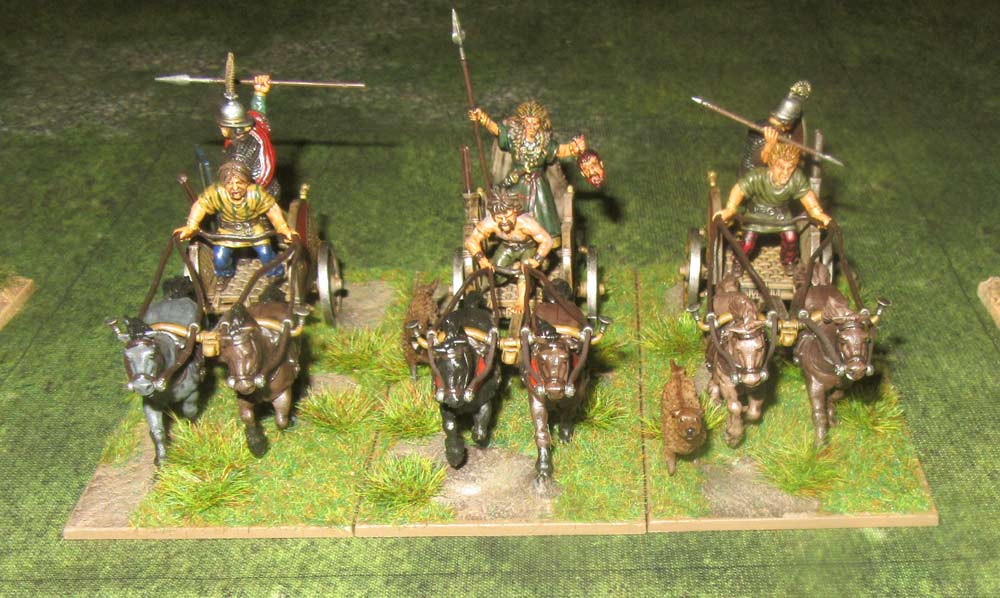 2 Responses “The Battle of Aeginium, 88BC”