It’s been a while since we last delved into this colourful period. The last time we were trying out Piquet’s Field of Battle. This time though, we returned to what is probably my favourite rules set for the period – Fire & Fury. While these are for the American Civil War, they adapt pretty easily for the European wars of the same period. Well, they would have if I’d remembered to look out my Fire & Furia Francese – a set of European amendments produced by the Wyre Forest Gamers. Still, I remembered the basics, so we managed. 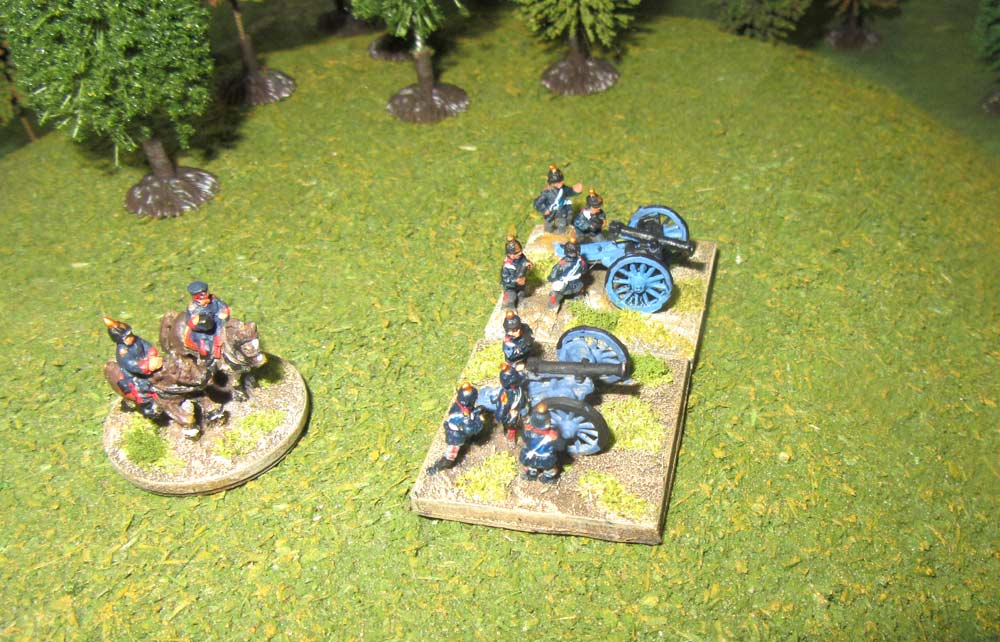 Actually, I hadn’t played a Fire & Fury game since 2017, so I was more than a little rusty. Sean, my opponent hadn’t played them since he was a teenager – quite a few years ago. Still, I’d given them a read through beforehand, to remind myself just how straightforward and intuitive they were. it was like rediscovering an old friend. Why had I flirted with others when F&F was still there, just waiting patiently for my return? Anyway, we decided to opt for a very small game, with two similar forces – just about four units a side (actually half regiments),  each of 6 stands, a jaeger unit of four stands and two batteries of artillery – with two guns apiece. 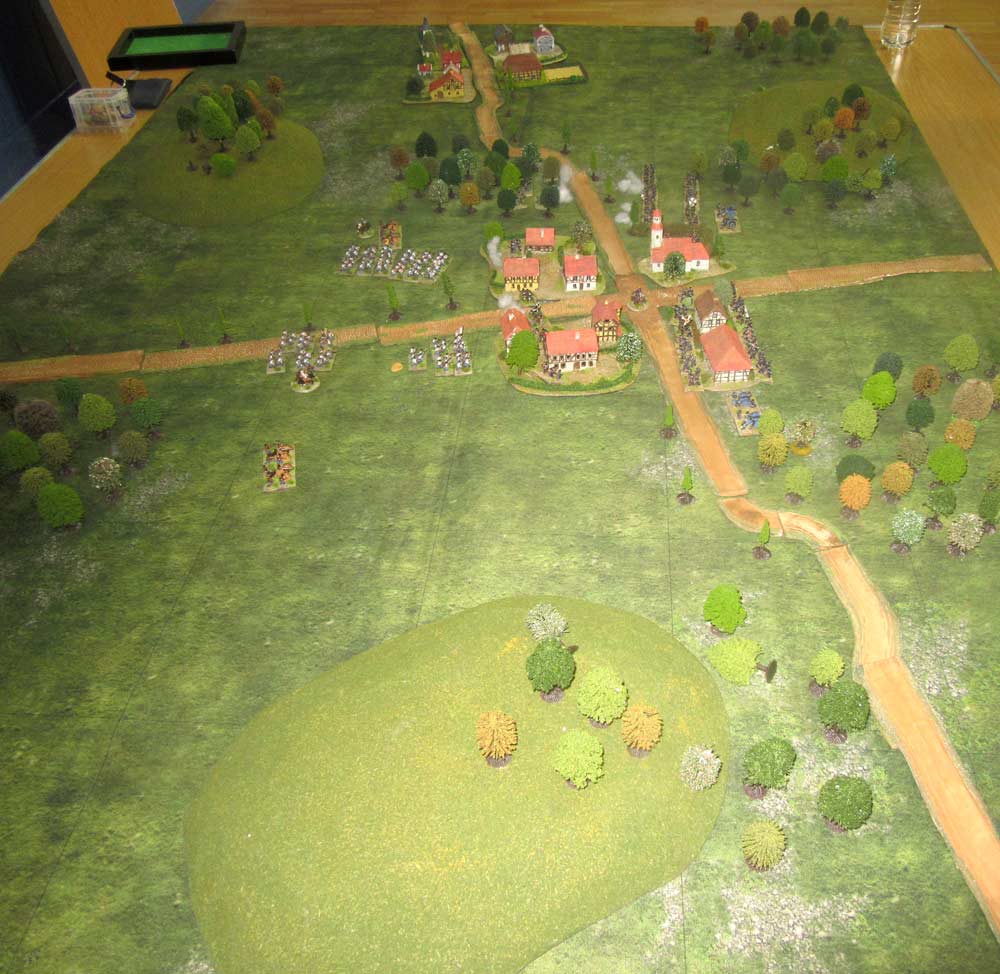 The aim was to fight for control of the little Bohemian village of Knischnitz (now Knĕžnice),  a few miles north of Gitschen (now Jicin). In our game, both sides approached the village at the same time, Ringelsheim’s 4th Brigade of the Austrian I Corps on one side, and the advance guard of the Prussian 5th Division on the other. the village sat in the middle of a 6×4 foot table, with another village, Libuň a little to the west. The Prussians were approaching Knischnitz from the north, and the Austrians from the south. 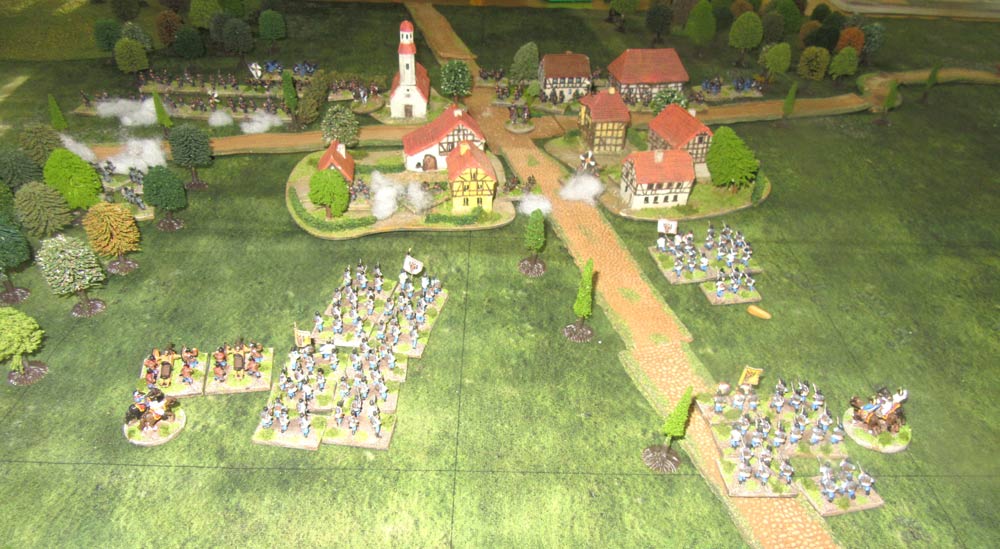 The game began with both sides moving forward as fast as they could – which wasn’t too fast for Sean, as he kept getting low scores on his  manouevre rolls. By the time the Austrians arrived in strength at the south side of the village, he’d only managed to throw his jaegers into the village, with troops of the 12th Grenadier regiment coming very slowly up behind them. On the Prussian left, the Austrian 26th Jaeger battalion had managed to ensconce itself in a small wood, and was busily taking potshots at the Prussian 48th Infantry Regiment. 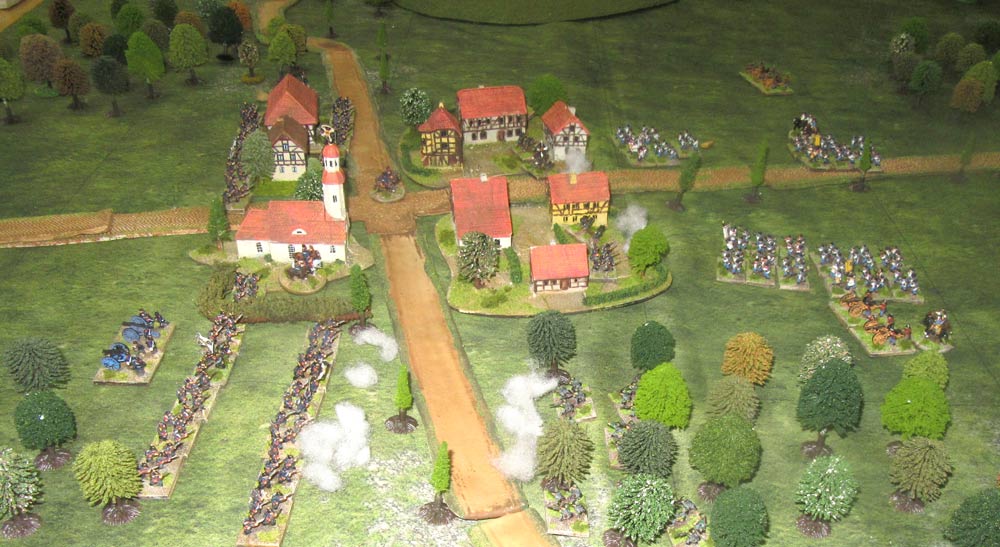 The jaegers were supported by a battery of Austrian 4-pounders, while the second Austrian battery was deployed to the south-east of the village. It and a Prussian battery were busily hammering it out with each other. I believe squaddies call it counter-battery fire. Anyway, it worked for the Austrians, who quickly silenced their less effective opponents. 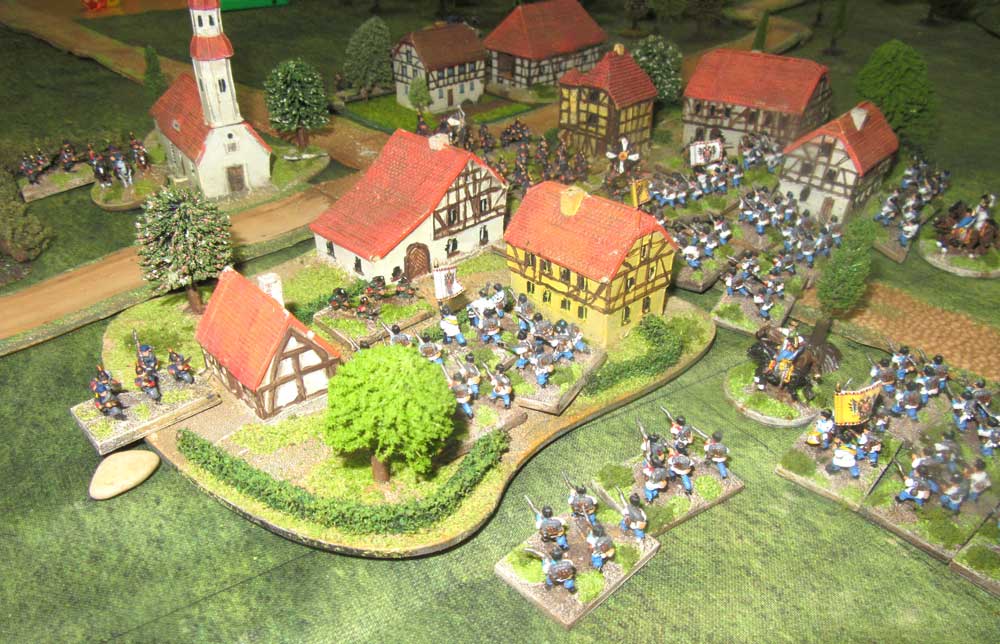 Over in the centre the Austrian 42nd and 73rd Infantry regiments had massed four battalions for the attack, and while their leading ranks fired back at the Prussian jaegers, the rest waited for Baron Ringelsheim to ride up, to lead the assault. This took a little while, as he was busy trying to rally one of the 42nd’s battalions, which had become disordered. Eventually though, everything was ready. 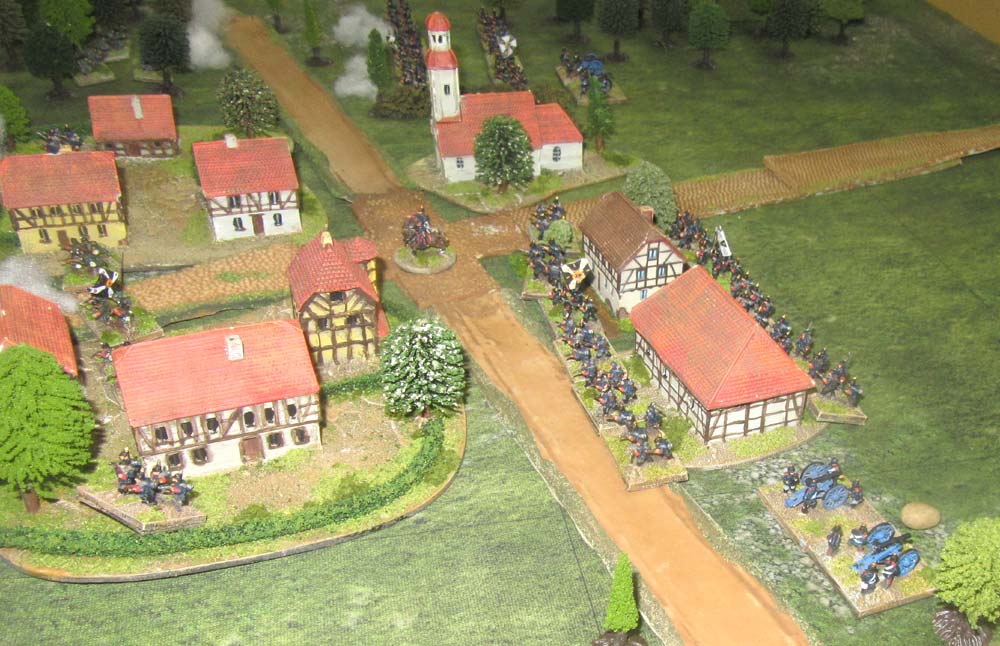 In the end it was easy – the poor Prussian jaegers were driven back from the southern edge of the village, and soon three of the four Austrian battalions had driven them back as far as Knischnitz’s main street. They’d also driven back a column of Prussian grenadiers, which had been caught up in the retreat. Across on the village’s northern side, the now outnumbered Prussian grenadiers formed a firing line, and began blazing away at the Austrian hordes. 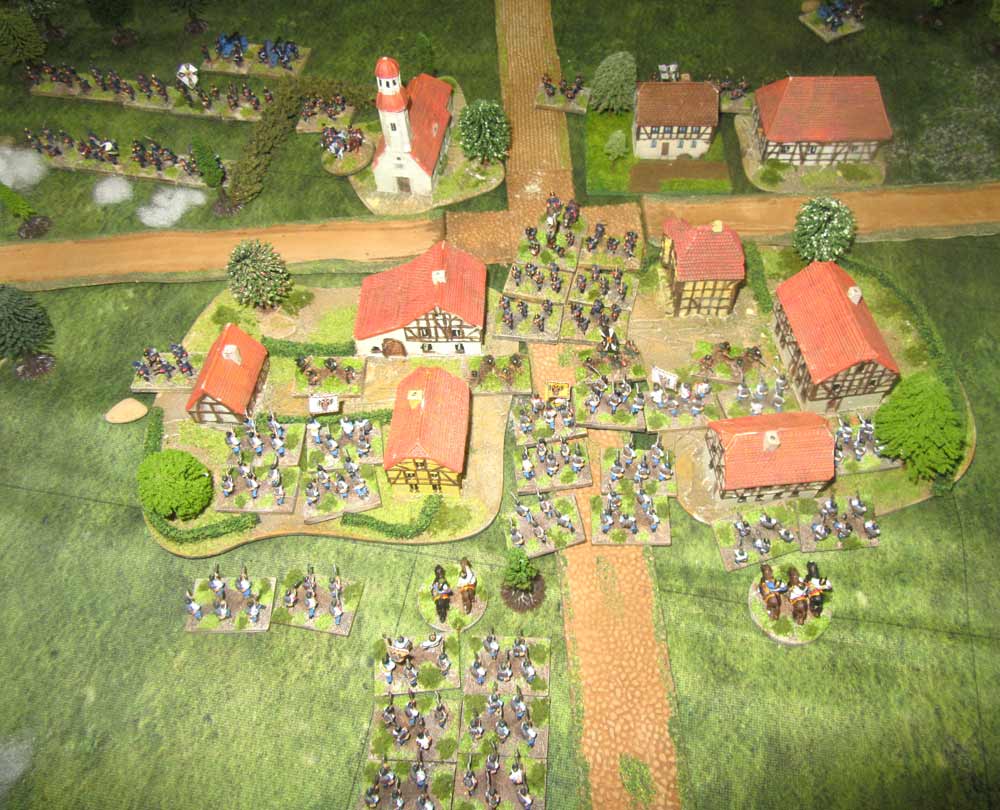 A turn later they’d lost their artillery support – the silenced Prussian battery on the north-east side of the village had finally been destroyed. In fact Sean wasn’t having a great day with his guns – his second battery had found itself trapped behind the Prussian 48th infantry, on the west side of the village, and never managed to unlimber, let alone join in the fight. It could have been pretty useful. 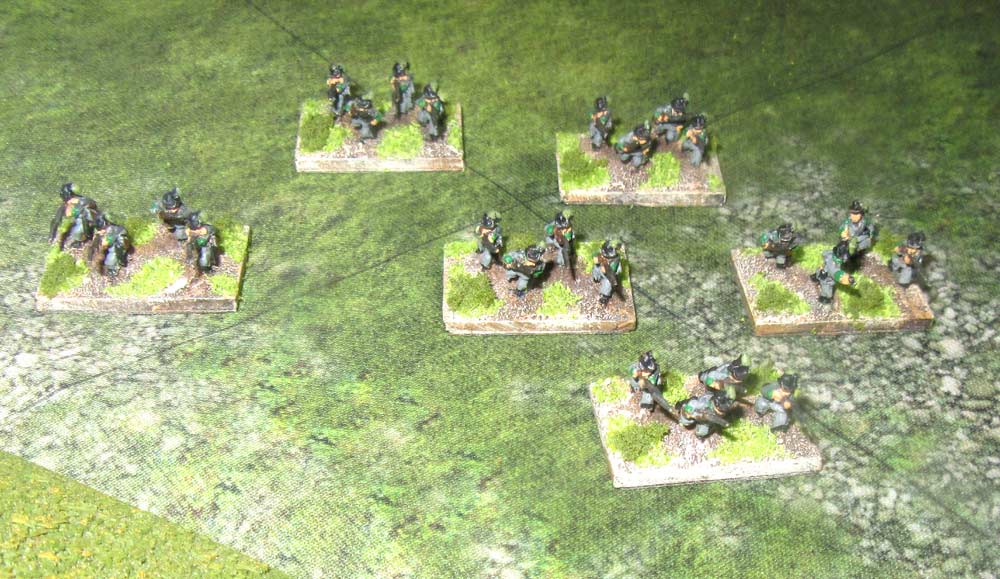 The reason was, the combination of the Austrian jaegers and the left-hand 4-pounder battery had been whittling down the Prussian regiment, and it had become worn, and then spent. Eventually the jaegers scored enough to make it vanish from the tabletop. That was pretty significant – a quarter of the Prussian line infantry.  I can’t really remember the Austrians doing that well before! 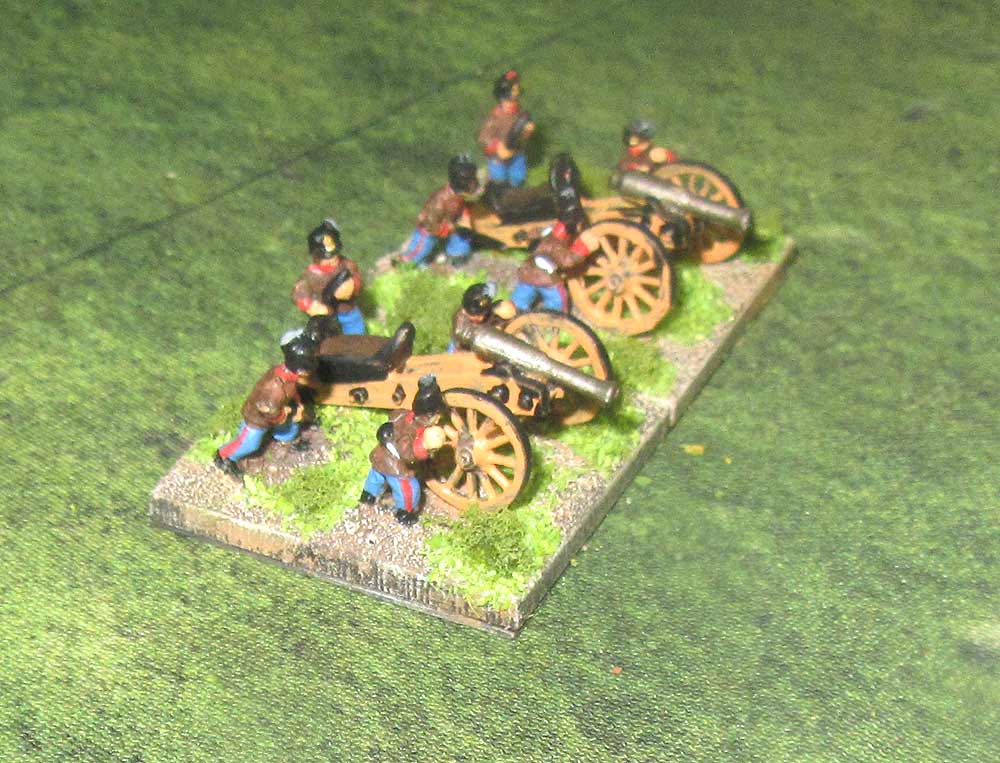 It was clearly time to bring this game to a close, as the Austrians – a side that never wins anything – were really pushing their luck.  We were running out of playing time too, so we decided to just finish the turn. The Prussians didn’t really have nay moving to do, so it was just an exchange of fire, and some rallying. Amazingly, even here the Prussians took more casualties, losing two more stands – one from each of their two regiments. So, we ended the game, and while both sides still had troops in Knischnitz, it was clear the Austrians had the better of the fight. As they never win, we decided to call the game a glowing win for the Kaiserlicks! If nothing else, that charge into the village with four formed-up Austrian columns was wonderfully heroic stuff – and photogenic to boot. 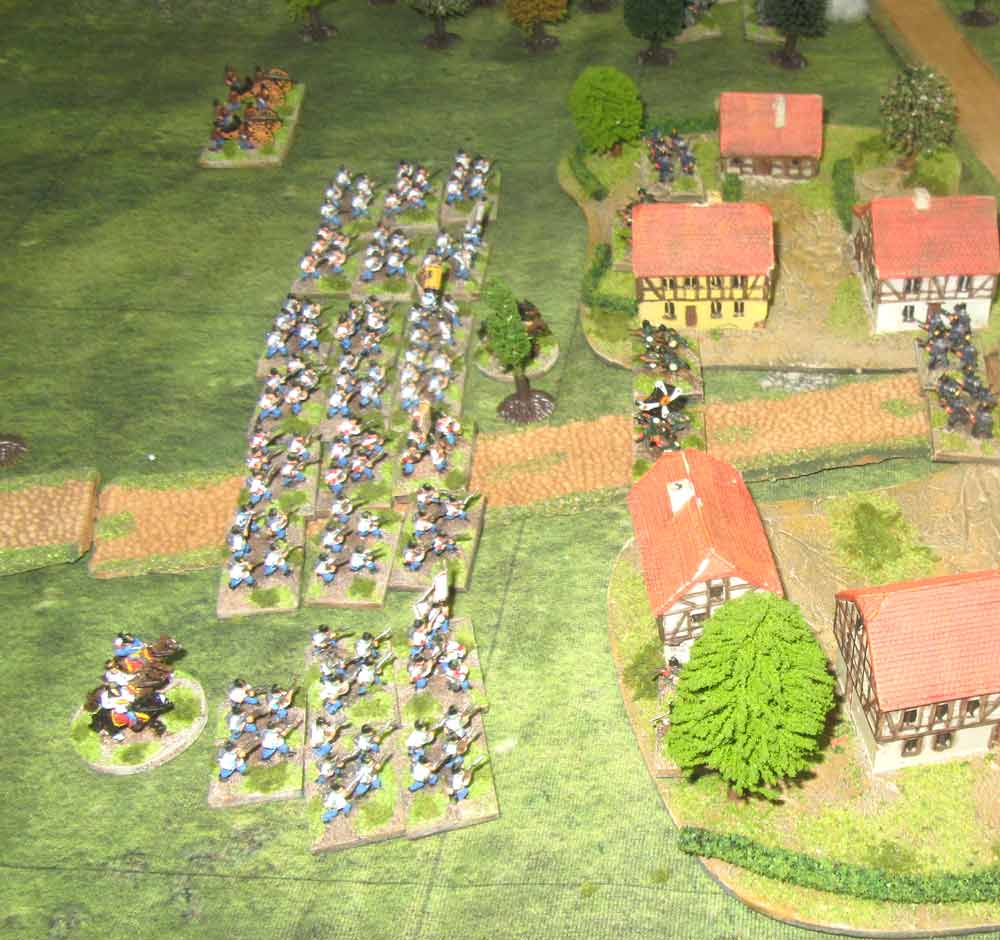