With two of our usual crowd off doing other things, Sean (1) and I were left to entertain ourselves at the club this week. I was surprised when, given the choice of a whole range of periods, he opted for this one. He tells me he likes the period, likes the system, and is quietly thinking of raising his own 10mm Confederate army. So, there ya go… we’re off to Bohemia again! This was an encounter battle – more of a minor clash really, based on the events of 28 June 1866. Having fought (and won) at Trautenau the day before, Field Marshal Gablenz was withdrawing his battered Austrian X Corps southwards, to link up with the rest of the army. 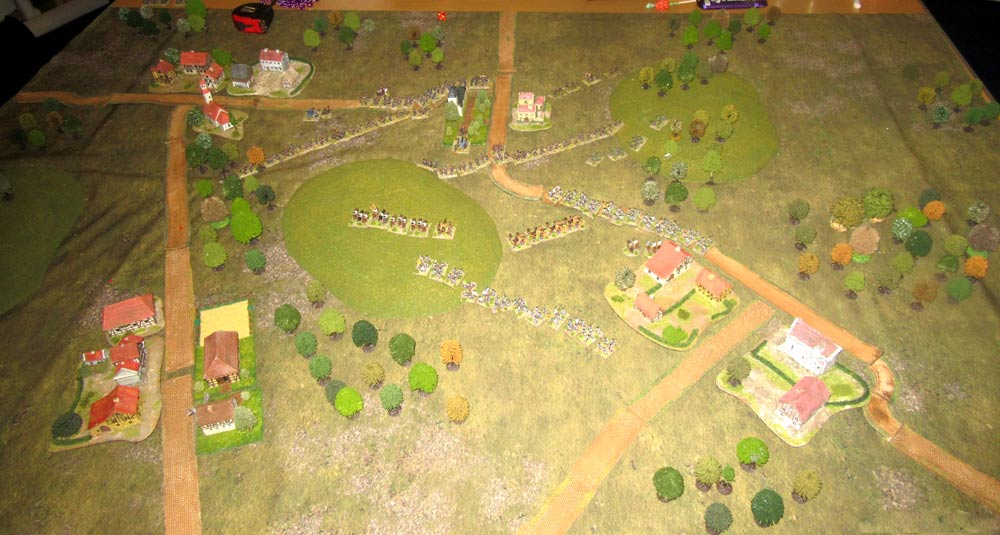 Meanwhile the Prussian Guards were advancing from the east, and the two sides clashed in a meeting engagement near the village of Burkersdorf. The game was fought out on a 6×4 foot table, in a picturesque landscape of villages, woods and low hills. In the photo at the top, looking south, Burkersdorf is the village on the right, Neu-Rognitz is on the left, Raatsch is in the top left and Straudenz is in the top right. the Prussian advanced guard had reached Straudnetz, with the rest of the 1st Guard Division advancing from the east, along the road which passed through Raatsch. 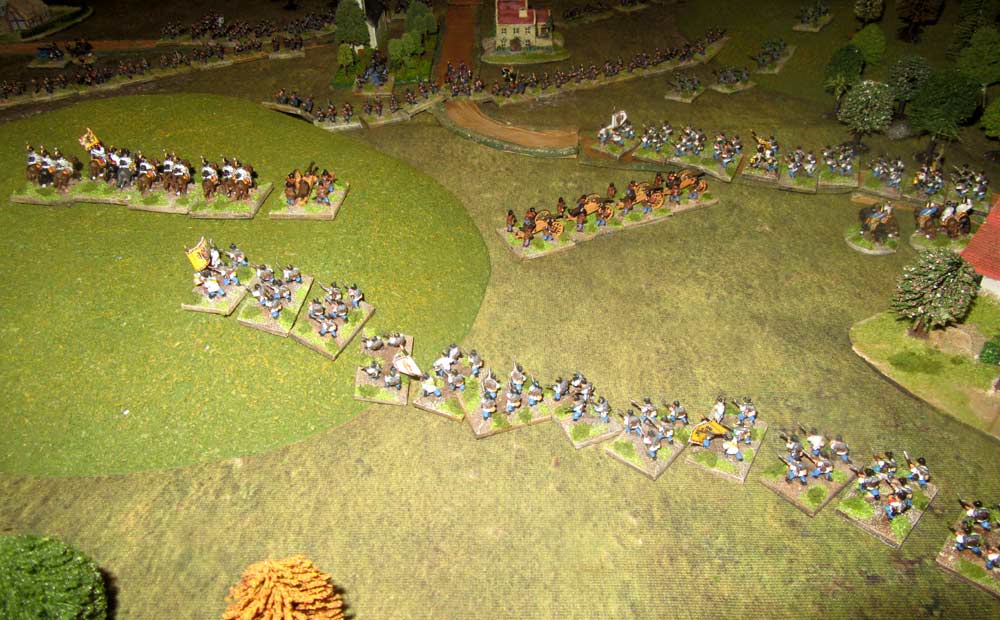 In this game, Sean (1) opted to command the Prussians, so I took charge of the Austrians. My force was also marching to the sound of the guns, with Knebel’s Brigade in the lead, followed by the corps artillery reserve, and then Mondel’s Brigade. Holding the high ground outside Straudenz was an Austrian dragoon regiment, backed up by a gun battery.

Inevitably, the battle started with both sides probing the enemy, and trying to form some sort of defensive line. Sean’s advanced guard at Straudenz – a combined Guard regiment supported by a pair of gun batteries – deployed in  the village, supported on their left by a battalion of Guard Jaegers. For my part they were matched by Knebel’s 1st Regiment, deployed unusually in a supported line.

Meanwhile I brought up the reserve artillery,  deploying them facing the village, while Knebel’s 3rd regiment headed for the high ground to the north-east of Straudenz. Sean was bringing up troops too, and once through Raatsch these guys – Alvensleben’s 2nd Brigade – swung to the right, forming up beneath the slopes of the low hill. things were hotting up fast. 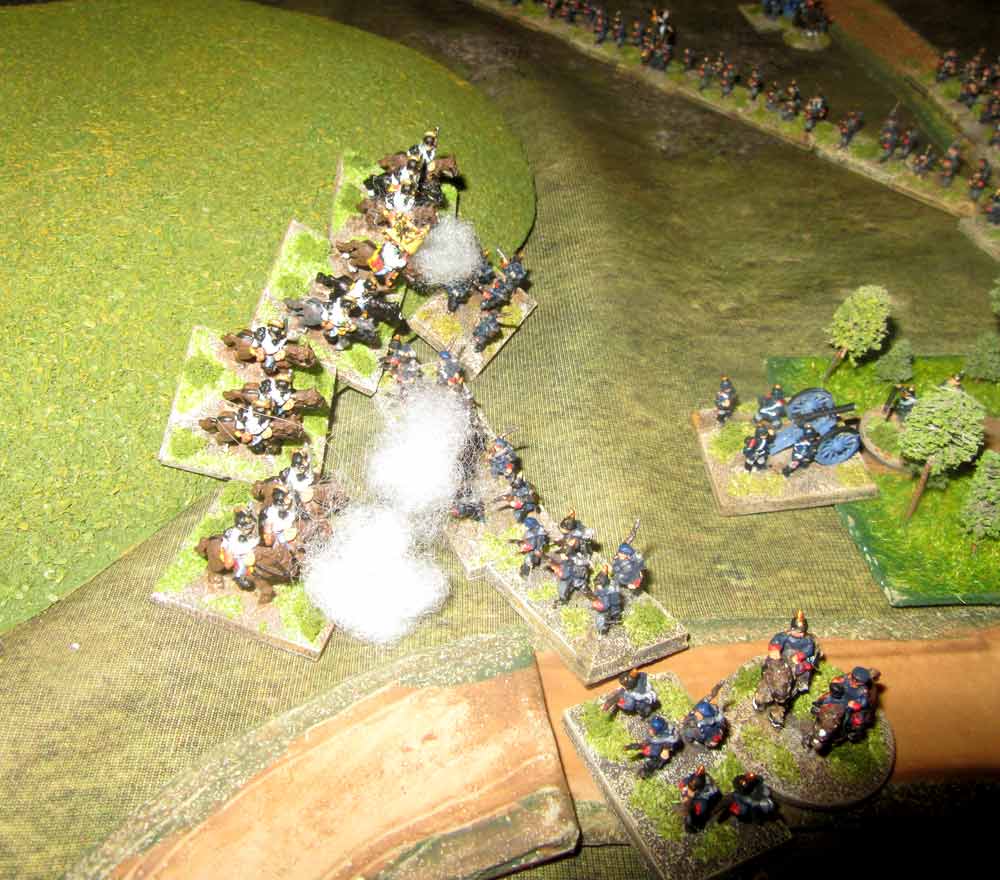 That’s when I launched the Austrian 2nd Dragoons in a wild, unsupported charge. My excuse was  that the Prussian advanced guard had advanced out of the village. Inevitably though, they got cut down by close-range rifle fire. Still, it looked good, and they managed to disorder the Prussian Guards before they were lifted off the table. That wasn’t really equal to the sacrifice though. 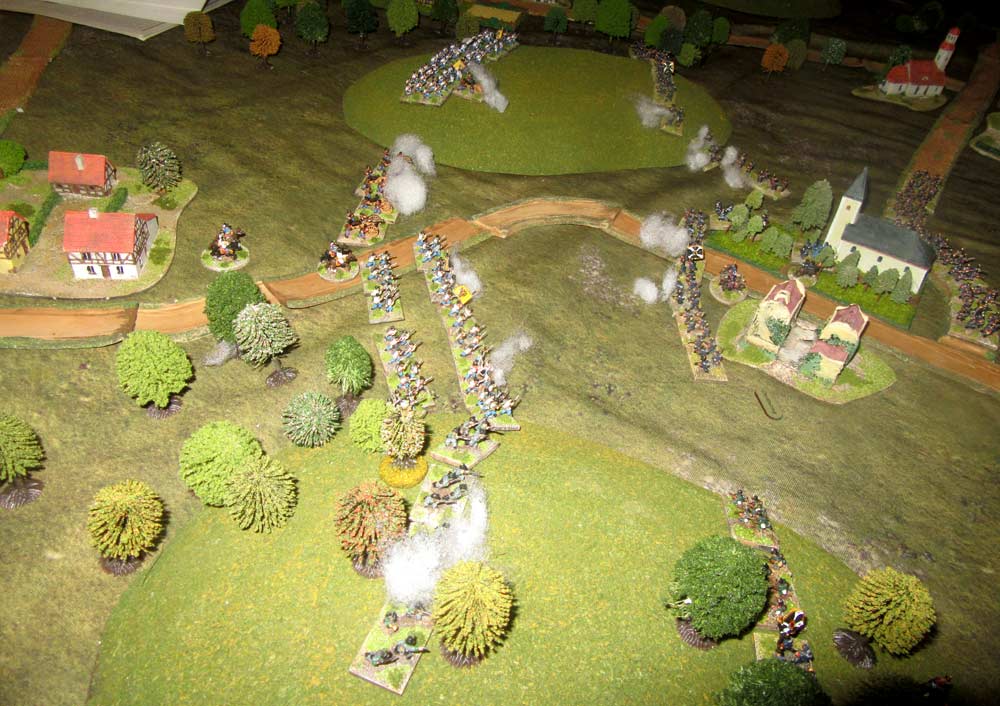 Over on my far right on the wooded hills to the west of Straudenz, the Austrian and Prussian jaegers were busily stalking each other. I broke off though, to pour fire into the Prussian Guards. Worse for them though, was the fire of the reserve artillery, which shredded the Prussian ranks. After two turns of this the Prussians finally retreated to the south, their unit “spent”. That left the village wide open. 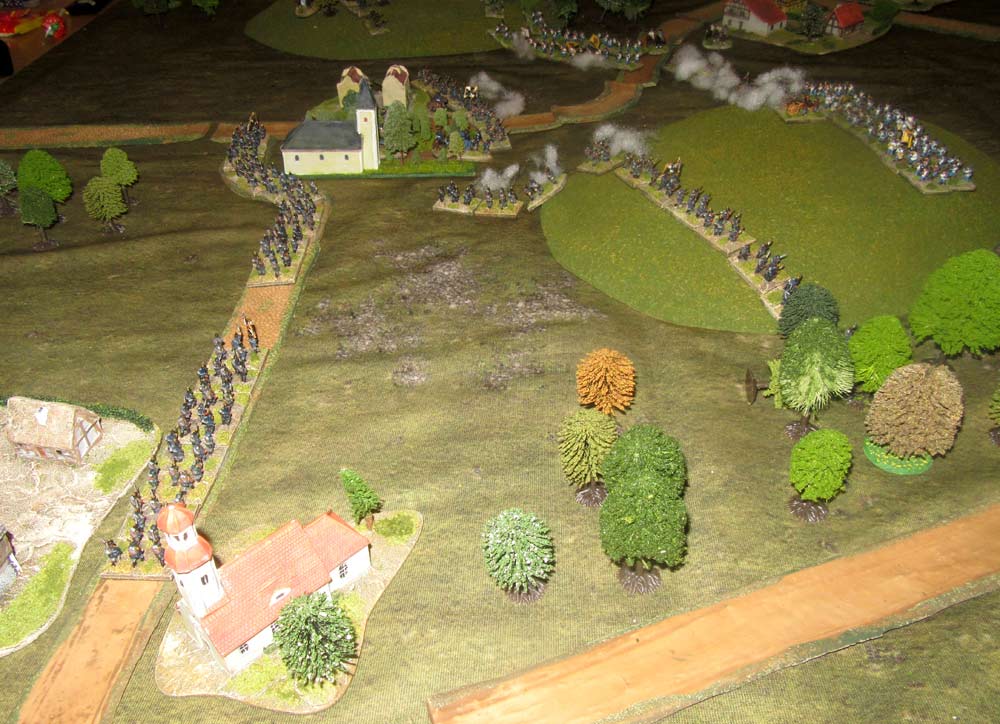 Plans to capture it though, were put on hold by developments on the nearby hill. There my 3rd regiment had deployed in columns attack formation, and was waiting for the Prussians to come within range. They fairly plodded forward though, in two  lines, with the Guard Fusilier Regt. leading, followed by the 2nd Guard Regiment, which had turned about outside Straudenz to join in the attack.

However, Austrian reinforcements were now arriving – the troops of Mondel’s Brigade marching through Burkersdorf to support Knebel’s strung out brigade. In theory this meant I now had the strength to launch an attack of my own. Incidentally, for these Bismarck’s Wars games using Fire & Fury, I field infantry regiments of 12 stands – that’s the Austrian 24th Regt. up above. Each is made up of three 4 stand battalions, but although we can, we don’t usually fight things at the battalion level. So, an American Civil War brigade in Fire & Fury equates to a regiment for our Bismarck’s Wars. That’s why we stick with  brigade-level  Fire & Fury. 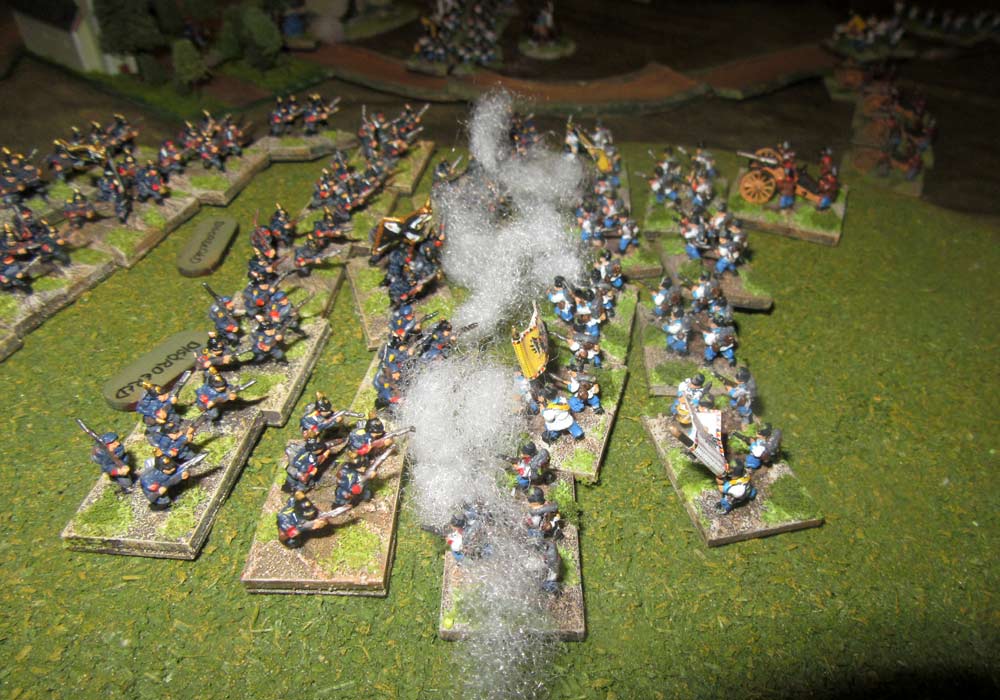 Right, back to the battle – or clash really. Time was marching on, and as our first turn was at 9.30am, and we’d played five 30 minute turns, it was now Noon. In real time though, it was 9.15pm – the time we traditionally make crazily rash moves, just before we have to pack our toys away. In Sean’s case it was advancing on up the hill, the Guard Fusiliers in the lead. My rash move was then firing into them with a supporting gun battery, using my reserve artillery to disorder the supporting 2nd Guard Regt., and then charging in. 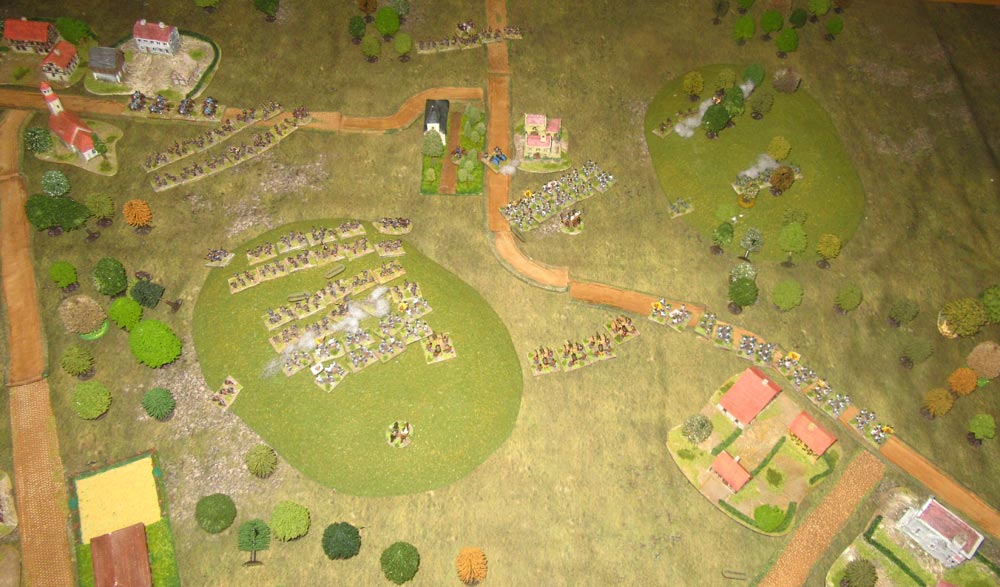 The Prussians were disordered already, and so their fire was ragged, but still powerful enough to cost me three stands. In the charge though, the Prussians were forced back, and the Austrians – battered but triumphant – held the ground. This though, wasn’t much of a success, as it was inevitable the Prussian steamroller would win out in the end. So, I gave the order to pull back, to reform around Burkersdorf, where Mondel’s Brigade were gathering. After all, my job was to delay the enemy, not to get slaughtered by them. 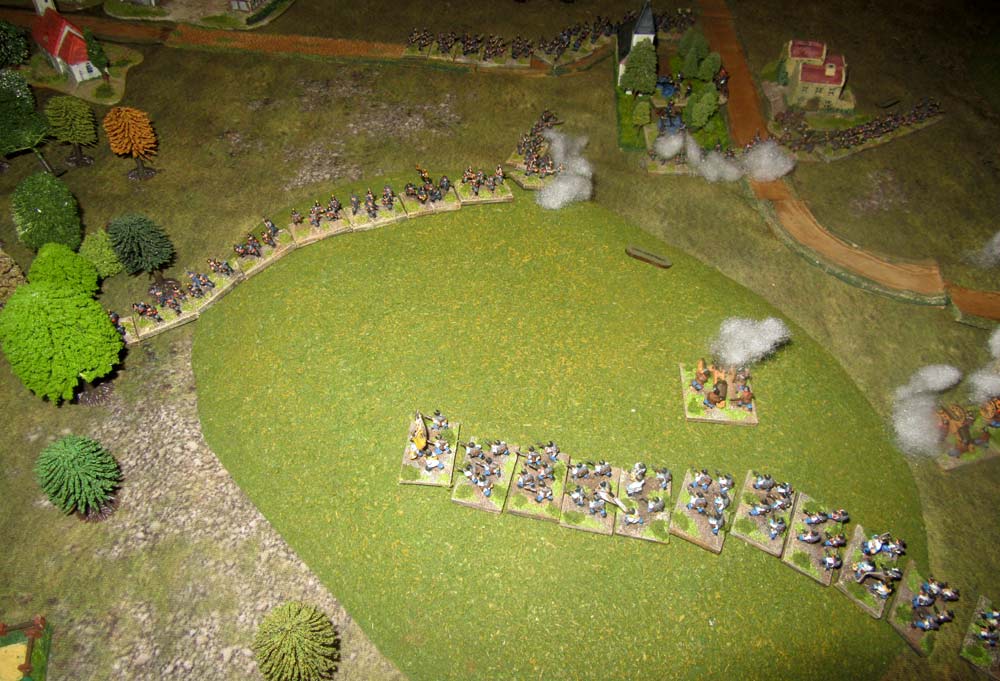 I had one card left to play though, Straudenz was now held by a solitary Prussian gun battery. So, Knebel’s 1st Austrian Regt. reformed into assault columns and charged. It lost two stands, but they forced the gunners to flee, and took the village. So, at game’s end the Austrian were in control of Burkersdorf and Straudenz. That fulfilled their objective of holding their ground, while the rest of X Corps marched on to the south. This meant our encounter battle ended in an Austrian victory – even though they suffered marginally more casualties than the Prussians. Next time I imagine Sean will press his troops a tad harder – or roll better Manoeuvre dice!