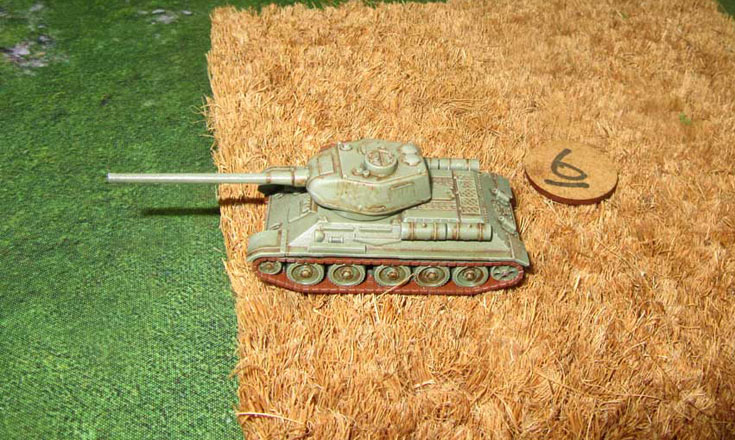 This week we held our AGM, which inevitably sucked up some time. It all went fairly smoothly though;  Lindsay was re-elected as Madam Chair, Gyles as Treasurer, while I managed to slope off my Secretarial responsibilities to young Chris. We also adopted a constitution for the first time – passed by all 22 present without dissent. Huzzah! That bureaucratic stuff out of the way, we got on with gaming. As we didn’t expect to have time for a full game, my friend Bob offered to run a quick n’ dirty What a Tanker! game.

Actually, it seemed to be in vogue, as there was another What a Tanker! game going on at the next table. In our one, the game was et in Russia during 1944, mainly ’cause Bob wanted to field some big cats. Sean, Graham and Nick fielded a Tiger II, a Panzer IVH and a Panther respectively, while Mally and I shared a SU-122, a T34/85 and a T-34/76. We played the game out on a 6×4 foot table. 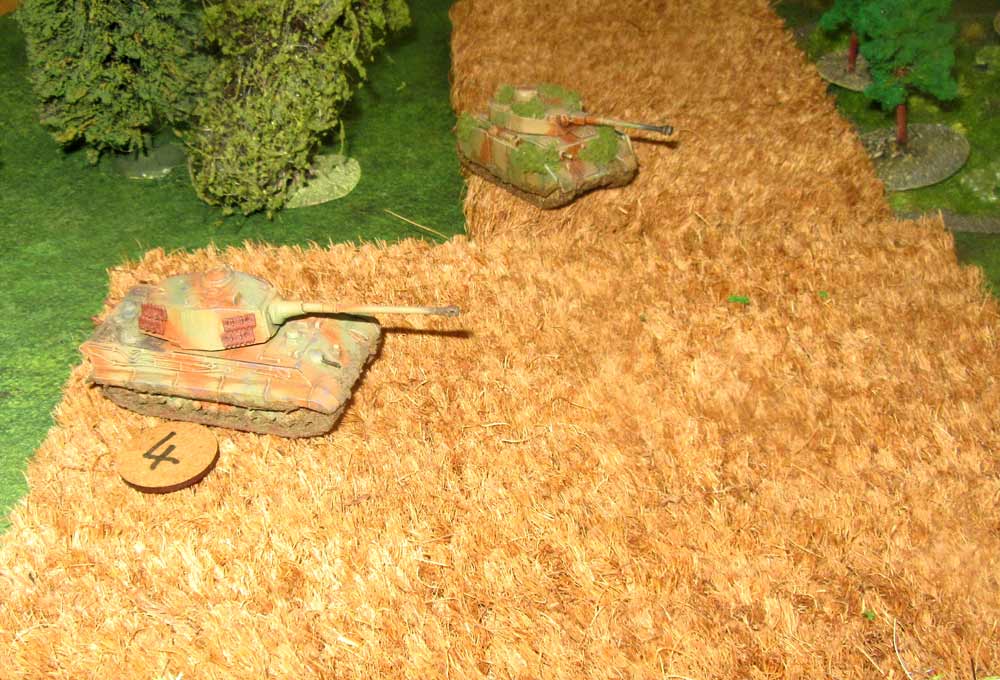 Both sides spent the first time moving forward, but for some reason I couldn’t quite seem to get my SU-122 into gear. It moved very slowly, but eventually reached the village. My plan was to find a good firing position then pick off whatever German tanks came within range. Instead, I was out-trundled by Nick. 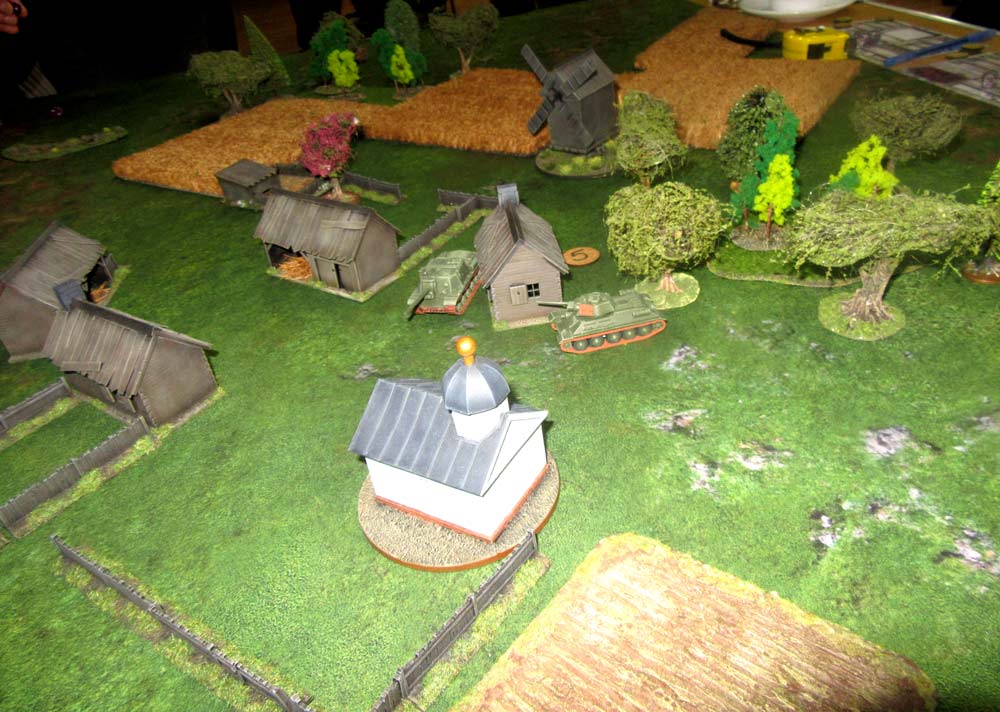 His Panther raced down the side of the table, and emerged behind the village, where he had a clear shot of the rear of my tank destroyer. He hit easily, then rolled truly devastating dice which brewed me up! 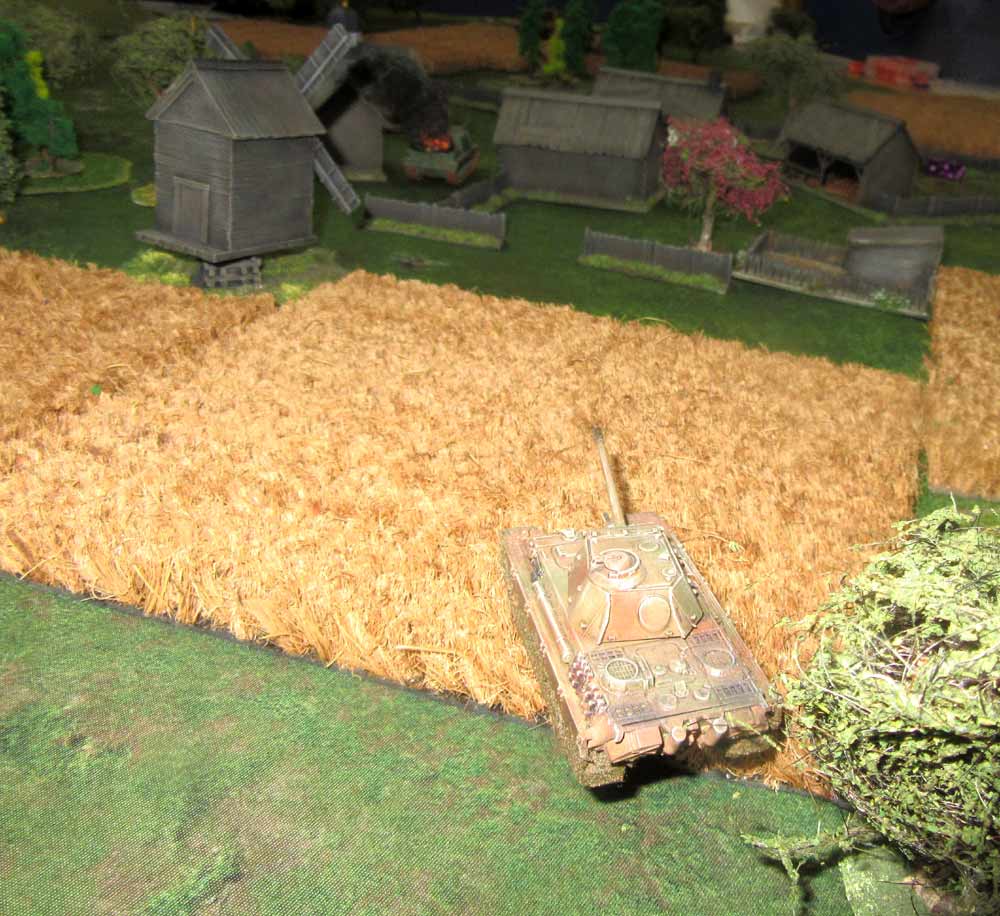 Not only did this mean the first kill went to the Germans, but they’d also knocked out our only AFV capable of dealing with the enemy Tiger II. Still, Mally did his best, stopping his T-34 in a cornfield to engage the Tiger and the Pz.IV off while I moved my older T-34 up in support. In fact, things seemed to be going okay, as the Germans kept missing. I even reached the cover of a small wood, and fired at the PzIV in the flank – but without hitting her. 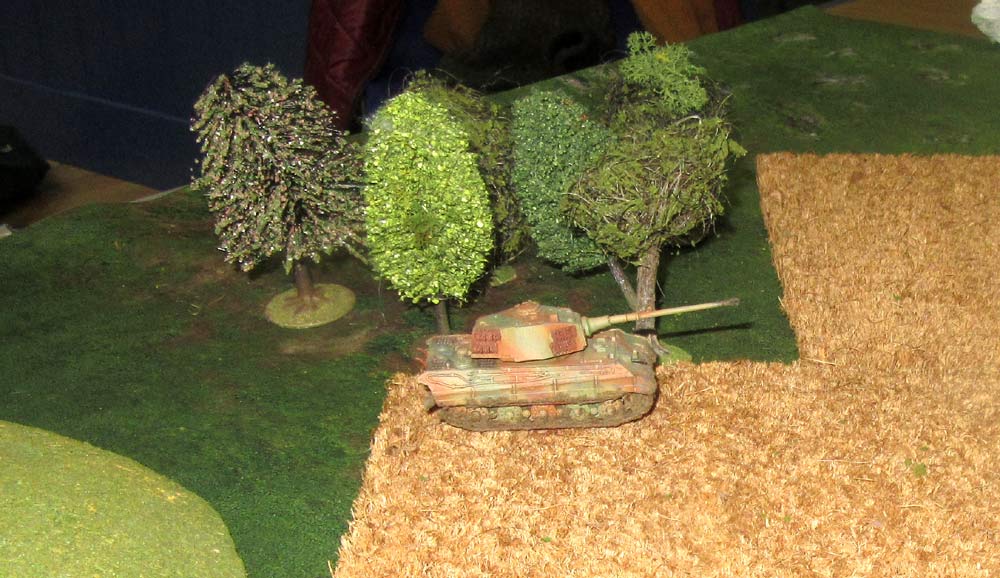 Then, Nick’s Panther reappeared. It had driven through the village, and emerged on the far side of it. He spotted a place where he could get a clear shot of my T-34/76 and let fly. Once again he scored a hit, and rolled a lethal number of damage dice to comprehensively knock me out. That meant we were now down to just one tank – Mally’s T-34/85 in the cornfield. 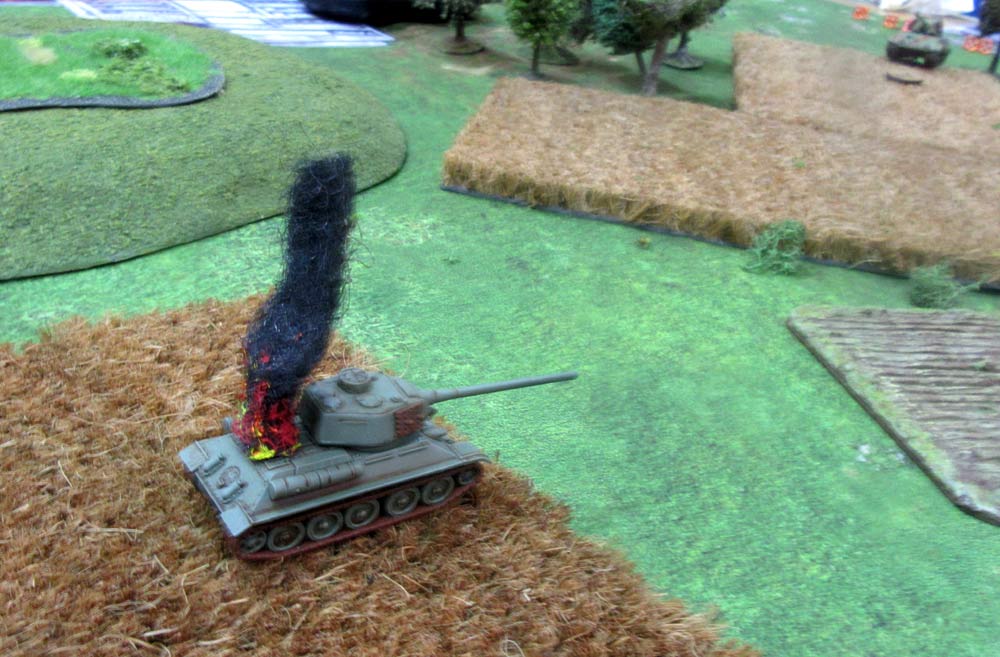 Actually, he’d been hitting the Tiger II, but most of his shells just bounced off its front armour.  Now though, faced with three German tanks, his chance of survival plummeted. Sure enough, at the start of the next turn Sean’s Tiger popped a shell into Mally’s tank, and she brewed up. At this point Bob took pity on us and gave us a couple of T-34s as reinforcements, just to keep the game going. 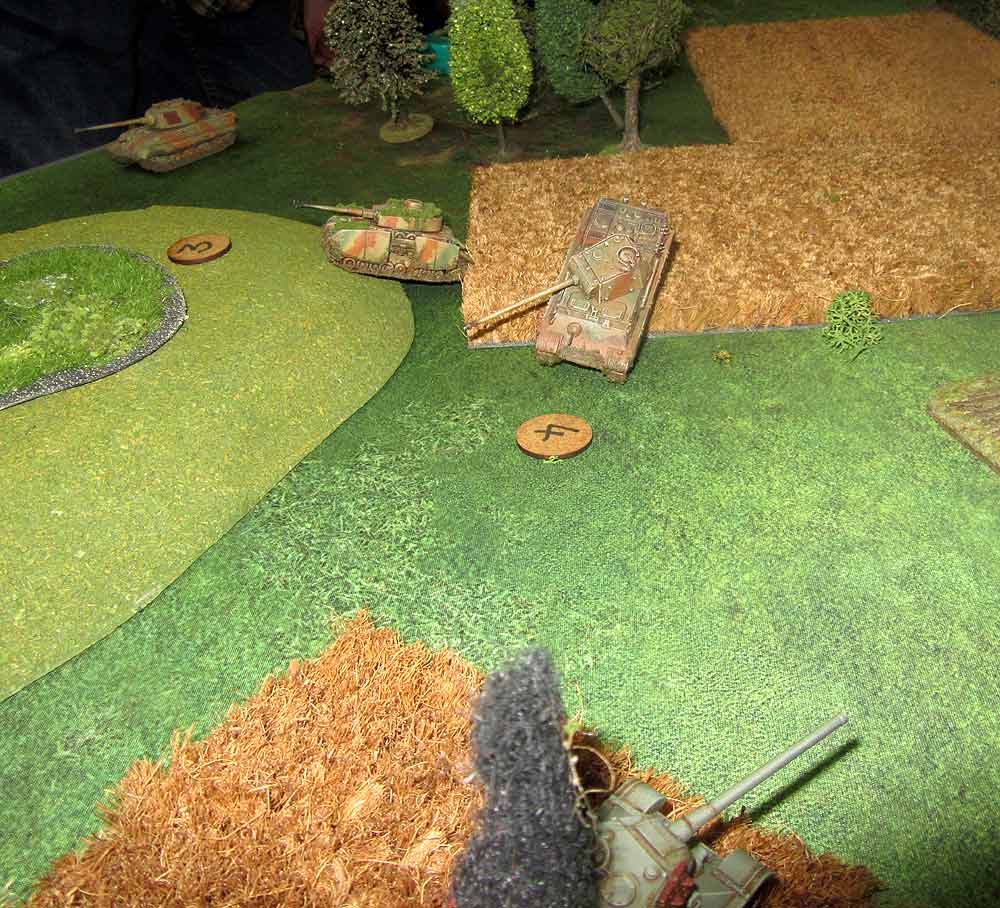 We were still outnumbered and outgunned though, but we did what we could. When Graham’s PzIV moved forward onto a nearby rise Mally and I both shot at him, but didn’t manage to score any telling hits. Sean’s Tiger II didn’t miss though, and brewed up my T-34/76 as it rashly moved across the table towards better cover. So, once again it was up to Mally to save the day for the Motherland! 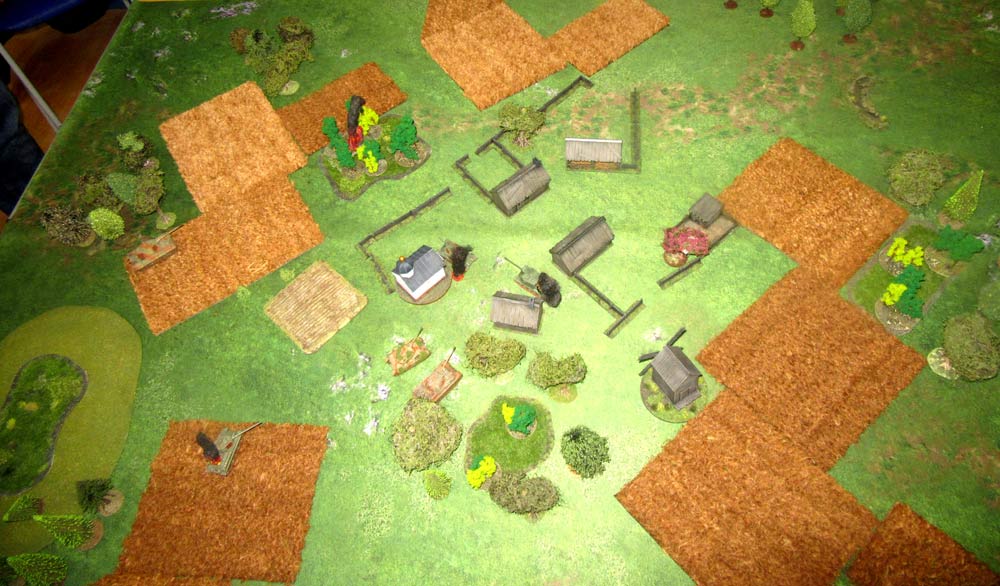 Well, with the odds three to one again it wasn’t an easy fight. Still, he hit and damaged the Pz.IV, forcing it to reverse hastily off the back of the slope. Mally scooted right into a stand of trees, but the remaining bog cats were circling, with Nick’s Panther coming from Mally’s right, and Sean’s Tiger II from the left. In the end it was the Tiger that delivered the killing blow, and knocked out our last tank. All in all it was a fun little game though. While What a Tanker! can’t be described as realistic, it is pretty entertaining, especially on nights when you’re pressed for time. Thanks again to Bob for sitting this one out and umpiring the game, and for supplying  the toys! 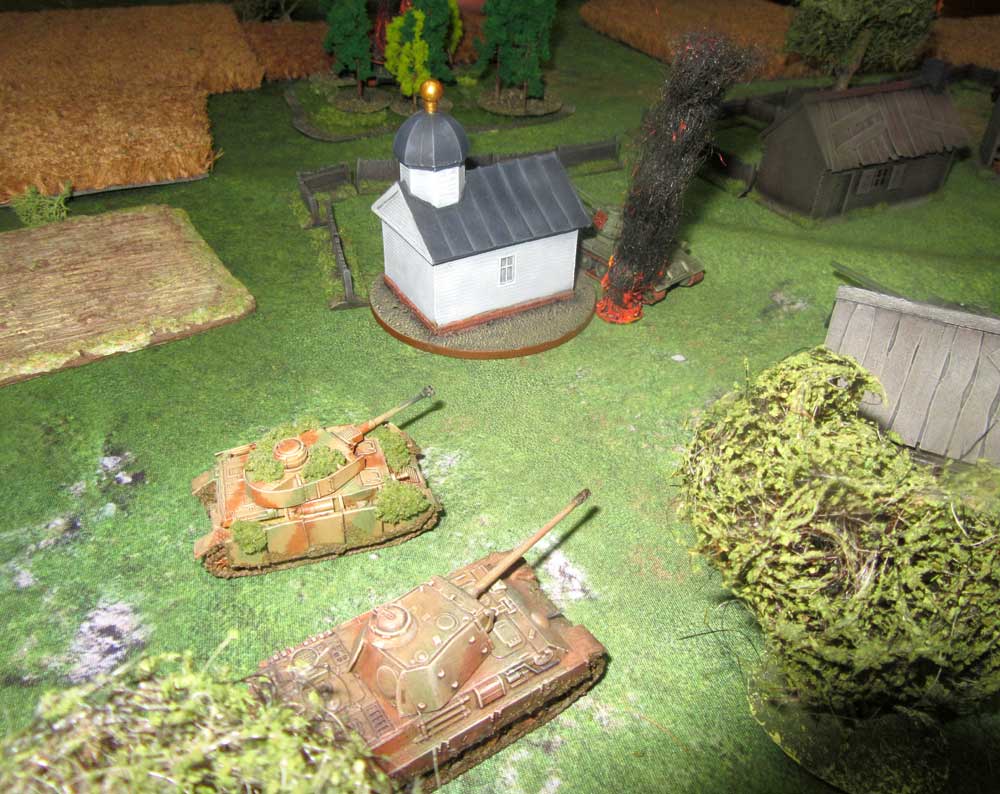