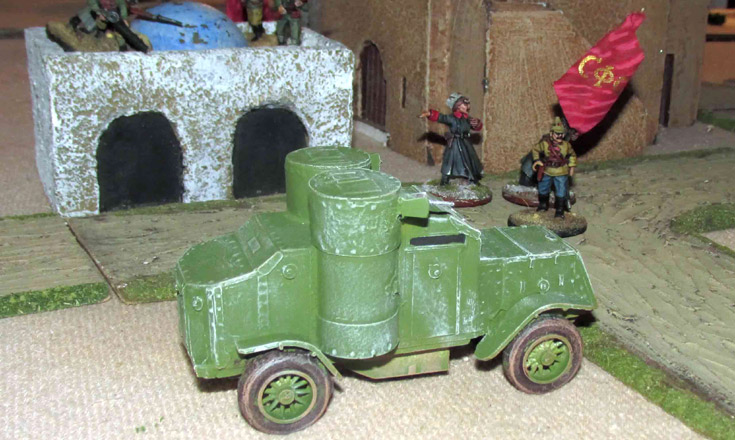 You may be forgiven for not knowing where Skobelev is. The place is now Fergana in Usbekistan, on the North Silk Road, to the south-east of Tashkent. As a town it is very decidedly in “The Back of Beyond”. It also set the scene for this three-cornered encounter for control of the region, fought out between Reds, Whites and a horde of marauding “Basmachi” tribesmen. The game was fought up in Orkney. Joe played the Reds, Gyles the Whites, and I the Basmachis.

The basic idea was that the town say in the middle of a 7×5 foot table, and each of the three factions appeared from a different table edge. Winter was setting in, and the town offered much-needed supplies and shelter. A Chinese ( occupying force (don’t ask) had just left, so the town was now up for grabs – hence the rush to capture it. A handful of locals tried vainly to defend their homesteads, as all three groups tried to gain control of as much of the town as possible. Each building had a hidden marker in it, saying how much supplies were inside. That would be as much a determiner of victory as possession of real estate. So began the first round of a new Back of Beyond campaign, fought in that long-forgotten dusty corner of the world.

We fought the game using Setting the East Ablaze! rules, which are essentially a slightly more rounded version of Chris Peers’ Contemptible Little Armies. The big difference is the activation system – you turn over cards to work out in what order units can move and fire. Both the Bolsheviks and the Whites had similar-sized forces – about four 10-man units of infantry, a couple of machine guns, a cavalry unit and an AFV of some kind (a tank for the Whites, an armoured car for the Bolsheviks). The Whites also had a field gun, while the Bolsheviks had a small cadre of Cheka, to bolster morale by neck-shooting the odd straggler. Both sizes had a commander, and the Bolsheviks also had a commissar, complete with megaphone/ loudhailer. The Basmachis were really there to make up numbers, with three large bunches of tribesmen, two smaller units of cavalry, and a unit of regulars. They didn’t have the luxury of machine guns or armoured cars.

The game began with everyone appearing at a table edge – the Bolsheviks beyond the railway, the Whites by the Prophet’s Tomb, and the Basmachis by the little bridge over the wadi. All three planned to grab as much real estate as they could – occupation of buildings was a major part of the victory conditions. The Reds won the race to the town, and launched their cavalry against a horde of mounted Basmachi tribesmen. Regulars get a real bonus here, and the Basmachis were slaughtered to a man.

The following turn the seconds unit of Basmachi cavalry bit the dust when it tried – rather rashly – to charge the White field gun. The riders were blown from their saddles by a hail of machine gun bullets. The Basmachis had their revenge though, when the Bolshevik cavalry found themselves in gun range of a band of tribesmen. Now it was their turn to fall in droves, and the survivors fled the field.

This pretty much halted the Basmachi drive for glory. The Bolsheviks took over the big three storey building in the centre of town, and watched as the Basmachis fought for control of a building across the street, which had been entered by tribesemen and white troops on the same turn. The Basmachis won that one, but were flushed out following a Bolshevik assault. With the Reds occupying the little building with the faded blue dome on the edge of town, they now had control of half of Skobelev. Elsewhere the Whites took over the small town market, and then advanced down the street to occupy the large white building, after driving out a unit of Cheka who tried to capture it at the same time.

The battle had now reached something of an impasse. The White cavalry was slaughtered by a hidded Red machine gun manned by sailors, while its tank sniped ineffectually at another Bolshevik machine gun position. The White drive had run out of steam, while the Bolsheviks used their armoured car to drive off the last of the Basmachi tribesmen and regulars who had launched an assault on the blue-domed house. Everyone’s units were now pretty exhausted, so we decided to end the game. Each building contained a little chit – actually a domino – and the numbers on the spots were added to the tally of ten points per building, to see who won.

The dominos were there to represent food stocks, needed to turn Skobolev into a winter supply base. Amazingly, while the Reds had captured more buildings, the Whites emerged on top, even though their army was pretty much finished. It seems all the high value dominoes were hidden in the buildings Joe’s troops had sneaked into, so victory was duly awarded to the White player.

It was a great little game, and has sort of rekindled my love for the “Back of Beyond” as a period. After all, it has colour, funkiness and flair – and what more could you wish for in a wargame! The rules worked very well indeed, and were easily picked up by the players, two of whom had never played them before. The card activation system is a nice touch, as it ratchets up the tension in the game, and makes everything a little more interesting.