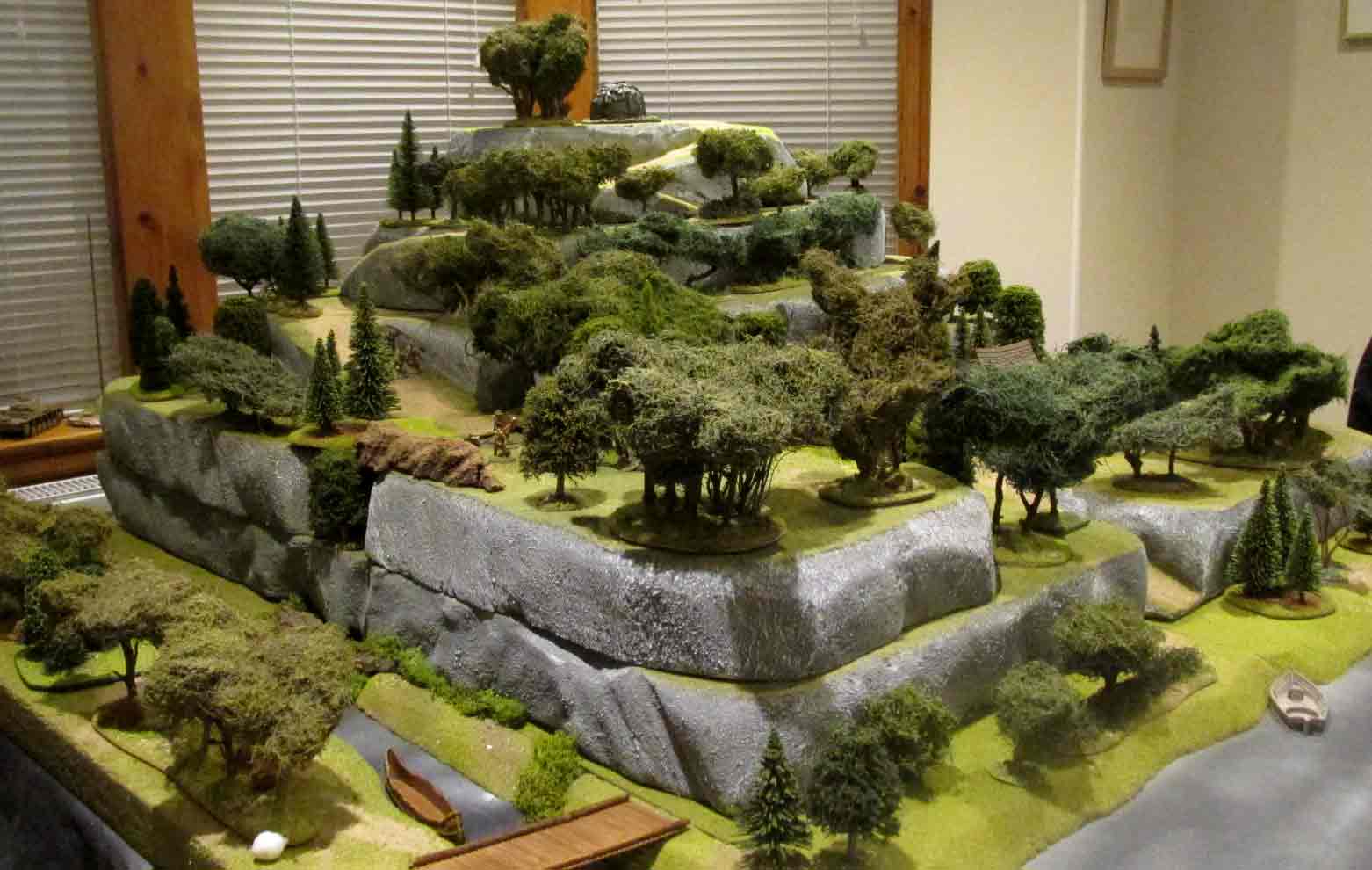 This French & Indian Wars skirmish game was staged by Hugh Wilson in his house. His terrain looked great – the great rocky mountain pictured above, separated from the rest of a table by a spur of Lake George. On the far bank was the small hamlet of Westport, and  a creek ran through a ravine between two more rocky hills. Beyond that the creek divided, and a third hill was reached by way of a small bridge spanning the gorge below. It all looked terrific, and was a suitably dramatic setting for out backwoods skirmish.

This was actually the second bit of a two part game. the guys had played the start of it the previous week, when I was away, and the various groups had already been involved in some heavy fighting. When I appeared I was given control of the Westport militia, and charged with defending the settlement. On Wilson’s Mountain on the far side of the inlet Ray’s trappers were holding off large numbers of Bill’s Indians (I could never work out who was British or French over there), and spent the evening happily fighting their own private battle.

I think Ray held on at least, because his guys were still standing at the end of the night. I was a little disappointed that the guns of the fine brig docked at Westport couldn’t fire her guns in support. Of course, not knowing who was on my side was also a slight problem!

On the far side of the creek from the settlement a party of British redcoats led by Donald were standing firm, while rangers occupied the high ground behind them. Facing them was a veritable swarm of French-supporting Indians operated by Hugh, who crossed the bridge over the gorge to launch an all-out attack on both British groups.

Earlier the redcoats had been whittled down by fire from French Coureur du Bois on my side of the creek, making them less able to stand their ground against the Indian horde. In the end after some particularly brutal hand-to-hand fighting around the hilltop hunting cabin the Rangers were wiped out. However, halfway down the hill, barring a pass above the creek, the redcoats were still holding on at game’s end.

On my side of the table I was faced by those same Coureur du Bois and a large unit of French Companie de Marine played by Railway Tim. My one advantage was a small unit of riflemen – small because they’d suffered casualties the previous week. Still, they opened up on the French massing on the hill above the settlement, and their fire eventually silenced the Coureur du Bois. We took casualties too though, but in the course of the evening we managed to repulse three attacks by the Marines, each time forcing them to retreat back over the lip of the hill.

Every time they suffered casualties, so by the end of the evening they didn’t have enough men to take the village. So, I suppose the game ended in a win for the British. Although outnumbered they’d held on, and I suppose that’s what matters. In this game Bill Gilchrist supplied the figures, Hugh Wilson the terrain, and the rules were – as ever – Muskets & Tomahawks.While the scenario wasn’t particularly subtle or scripted, it produced an enjoyable game, with plenty of moments of tension. All in all it was a thoroughly enjoyable way to spend an evening in the tabletop Adrirondacks!