This a slightly strange one – a game played in a converted bus in the wilds of Orkney’s West Mainland. The host, Lindsay, wasn’t taking part, while I was otherwise engaged on the other side of the island. So, the photos and the basics of the game review all came from her. During lockdown young Thomas had painted up a small Burgundian force, and was keen to try it out. Gyles, with his English, was happy to oblige. 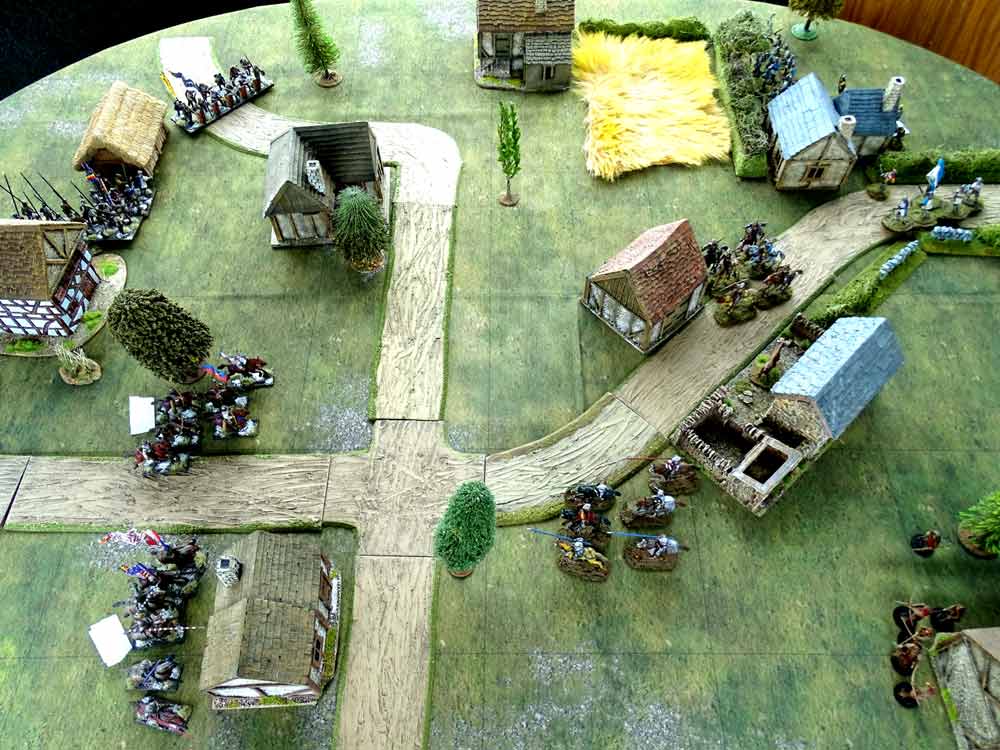 Actually there were two games, played out around the French village of La Calloterie,  some five miles from the Channel coast near Etaples. Strangely, the prequel game was played second – an English tax collecting foray, which was interrupted by a Burgundian raid from over the border in Flanders. The other game, played out around the same village, featured a more straightforward fight (known as a “bloodbath” in the rules) between the English under Thomas, Lord Camoys, and the Burgundians led by Lord Francis Dupont. 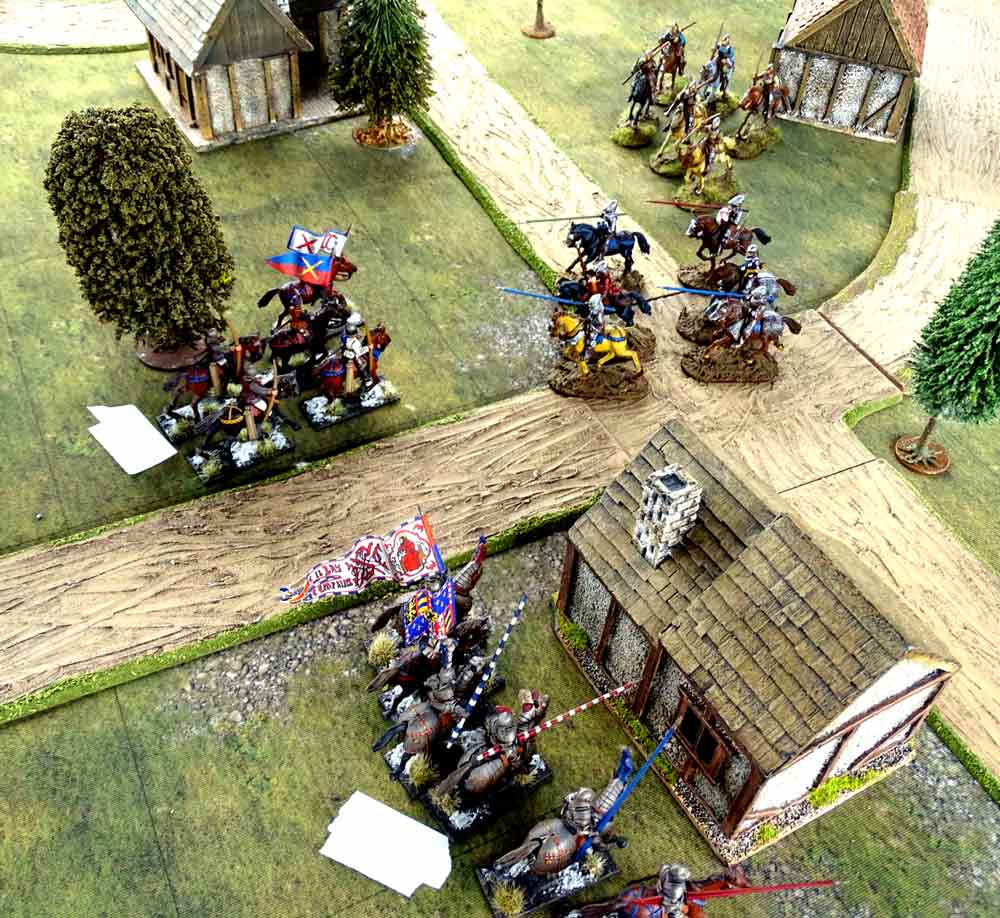 In the scenario called “A Taxing Afternoon”, Lindsay hid tax tokens under six of the village buildings. Each was worth between 1 and 3 points. They were the objectives. In this game, the two sides lined up on different edges of the 4×4 foot table, with Thomas (Lord Dupont) to the east and Gyles (Lord Camoys) to the west. Interestingly, from the start, both players had very different strategies. Thomas went for the tokens, while Gyles opted to stop his opponent making off with the loot. 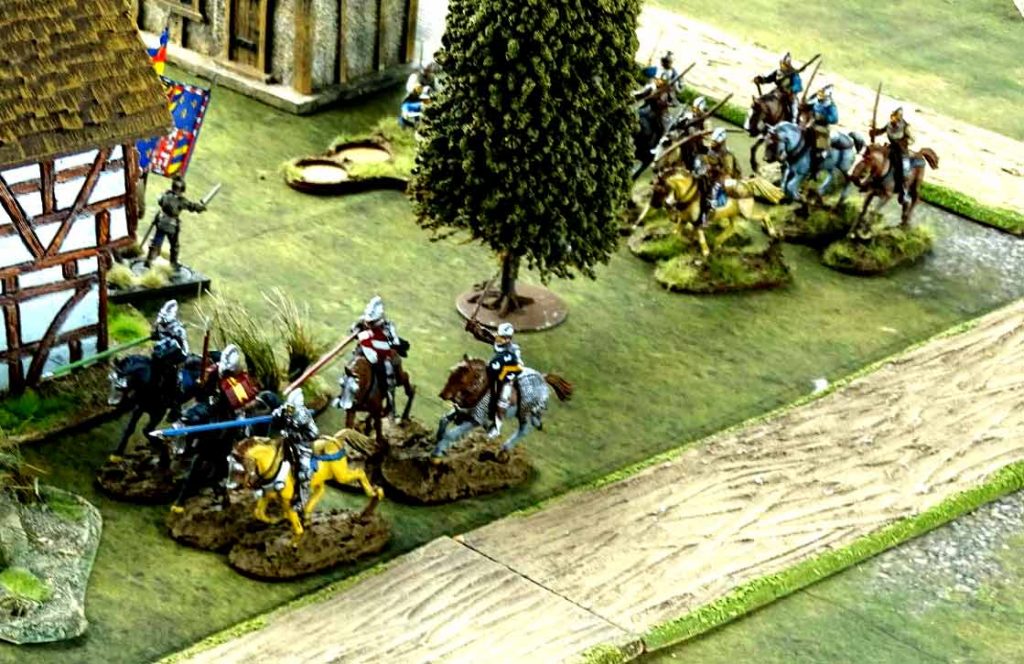 The Burgundians quickly collected three tokens, but by then the two sides were in the middle of the village, and a big skirmish developed. In the process the Burgundian unit of pikemen was trampled a bit, before the English mounted archers tore into their enemy’s lighter mounted yeomen. At that point the Burgundian riders failed their courage test, and abandoned their tax token. 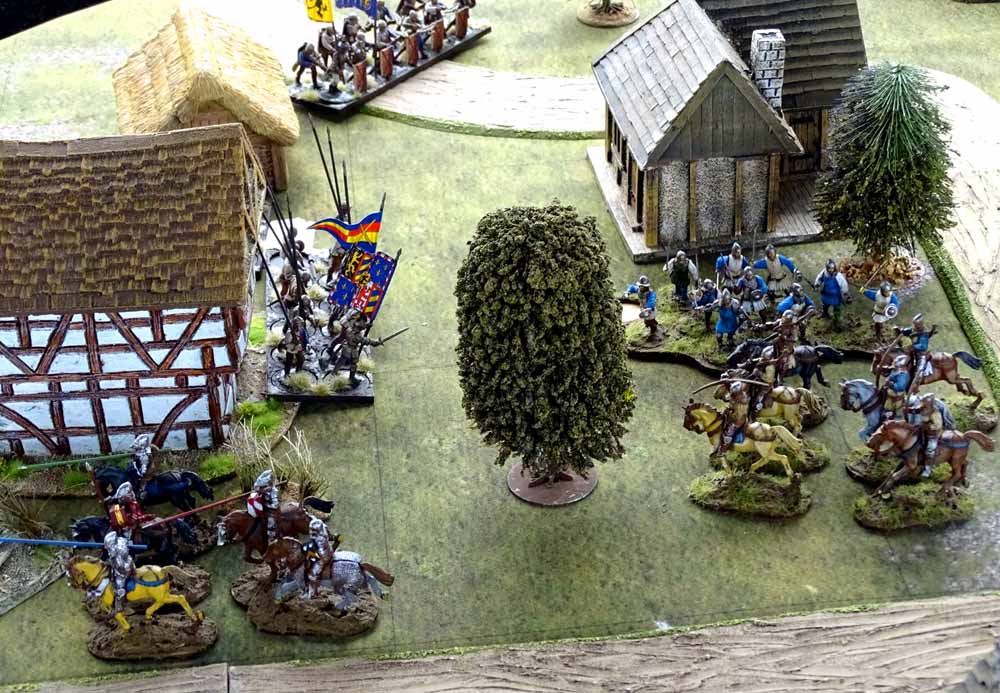 By now the fight in the centre of the village had escalated a bit.  Gyles used his English longbowmen to gather up the rest of the tax tokens, then headed off the table with them. Thomas’ Burgundian pikemen tried to stop them, but were shot up by arrows, and then charged and destroyed by Gyles’ fierce Welsh foot. So, things were starting to look up for the English.

Thomas sent his dismounted men-at-arms off the table with his remaining tax stash, leaving a unit of Burgundian crossbowmen to keep the enemy at bay. They were fired on by Glyes’ English longbowmen, but they kept firing back, and then wiped out the Welsh fierce foot to a man. In the end though, the crossbowmen went down too. So, that ended the first game. Both players added up their tally, and it turned out Thomas had 5 points of taxes, but Gyles had 6. So, it ended with a hard-fought English win. 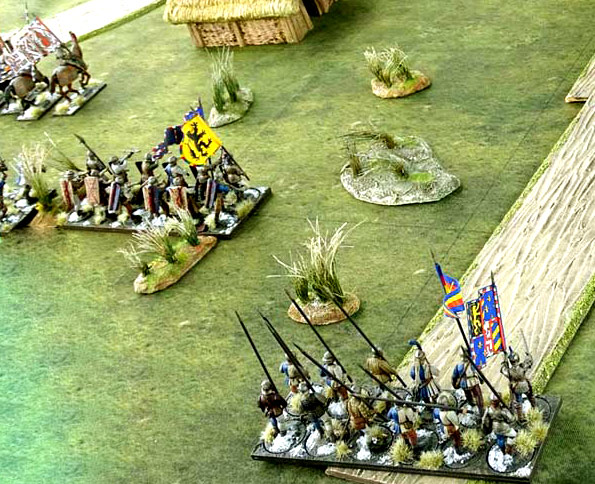 This though, wasn’t enough. The next game was a straight-up fight between the two retinues – again with Gyles playing the English and Thomas the Burgundians. In this one, Lord Camoys’ English were attacking, and Lord Dupont’s Burgundians were the defenders. hey both lined up and approached the village from the North and South respectively – the picture above shows the Burgundians marching on. Both sides though, led with their cavalry, which cantered into the centre of La Calloterie. 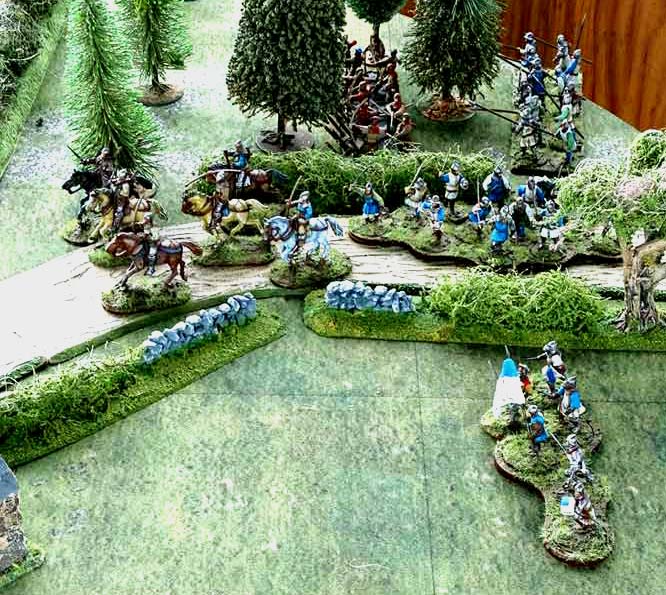 Thomas though, kept his Burgundians out of range of the English mounted archers, who were firing at anyone who came near them. They got shot up themselves though, from their Burgundian counterparts, and became “battered” (down to half strength). They rallied though, and were soon back in the game. Meanwhile, the infantry had come up to join in the fight. 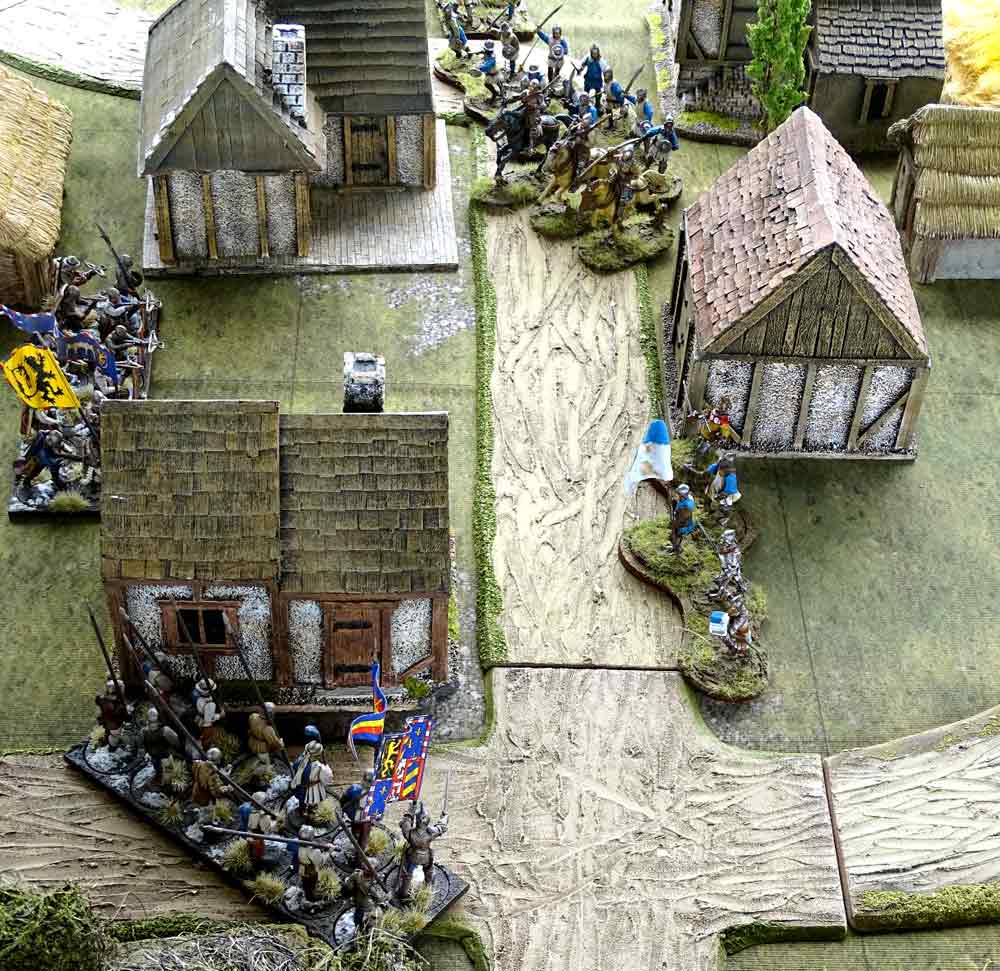 Lord Camopys kept trying to issue a challenge to Lord Dupont, as he had an edge in swordsmanship, so Thomas wisely kept his leader out of range. Their troops though, were now hard at it. The resulting scrap truly was a bloodbath. The English archers tried to shoot Dupont, then wiped out the Burgundian mounted yeomen. Gyles English dismounted men-at-arms then charged them, and curt the Burgundian riders to pieces. 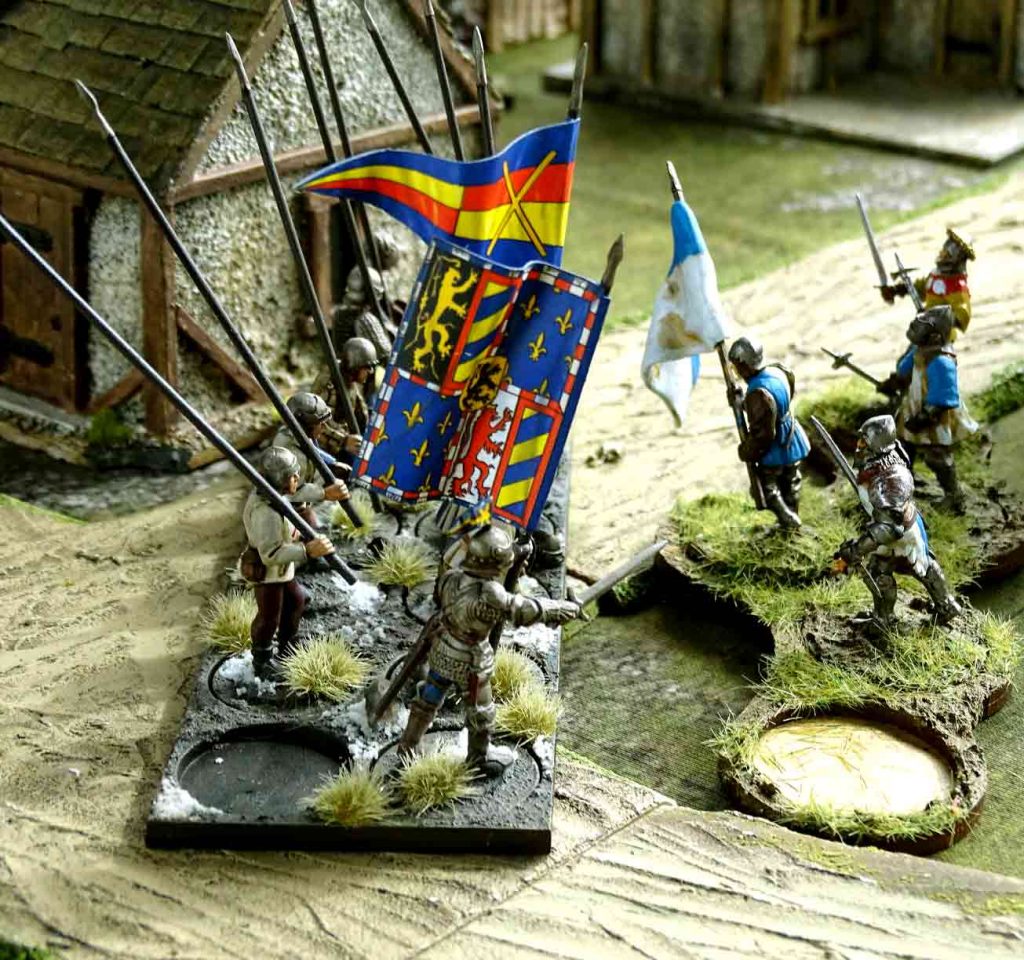 Thomas then waded in with his Burgundian pikemen, but couldn’t break Lord Colmoys and his knights. So, they backed off. Thomas’ own Burgundian mounted men-at-arms charged the Welsh fierce foot, but again both sides only took casualties, then backed off before anyone was broken. Then, Gyles’ dismounted men-at-arms charged the pikes again, and this time forced them back with heavy casualties. By now though, it was clear that both sides were spent, and there’d be no clear leader. 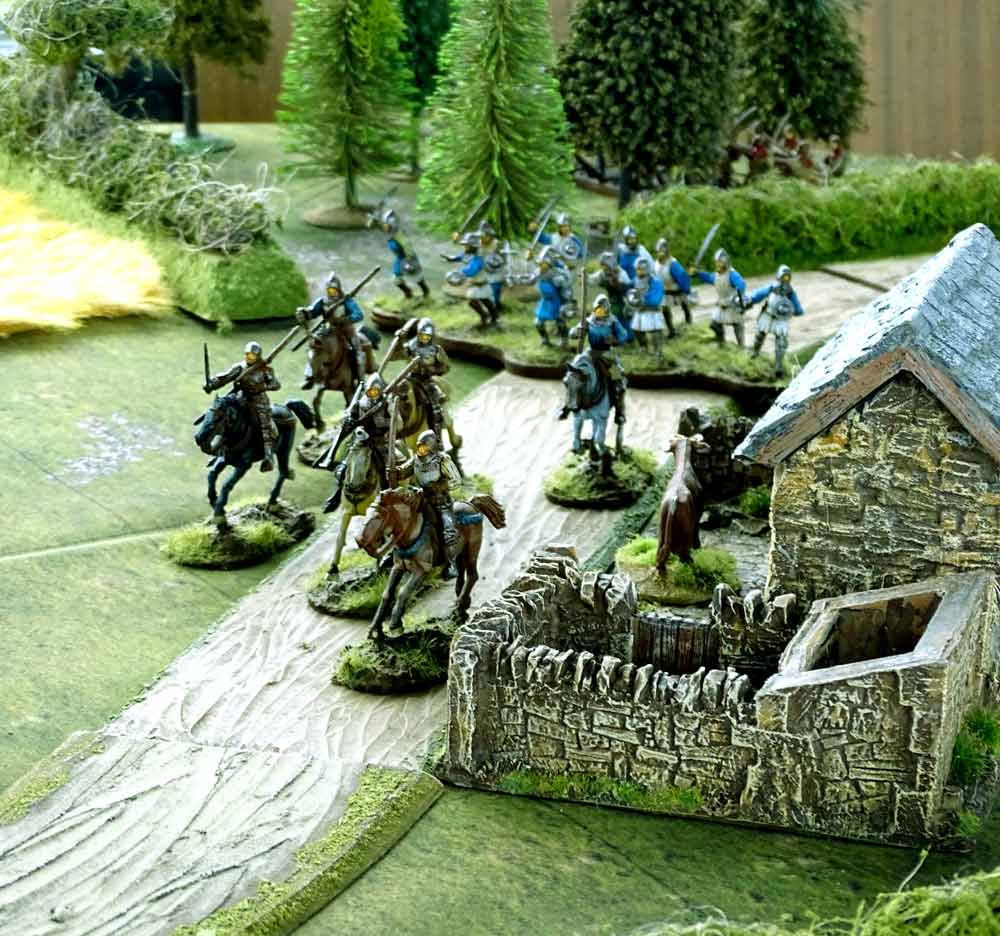 So, the bloodbath ended as a very hard-fought draw. Both players enjoyed their two games, and no doubt are already plotting revenge – probably by painting up reinforcements. Next time though, my French will willingly give either of these upstarts a run for their money! Meanwhile, thanks again to Lindsay Bailey for the pics, and the account of the day’s gaming,fought out in her converted bus! 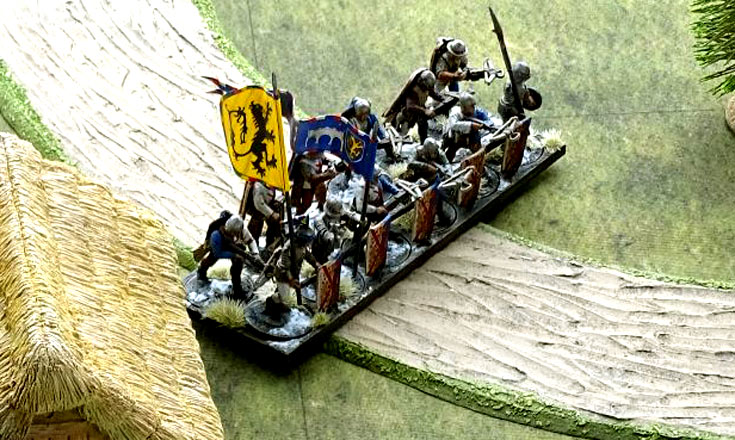 3 Responses “The skirmish at La Calloterie 1432”