The Age of Mary Stuart, The Pikeman’s Lament, 28mm

We hadn’t had a game for a few weeks thanks to Scotland’s tight lockdown restrictions. Still, Gyles and I still managed a small socially-distanced game in the garage. As we couldn’t take all day with this, we settled on a skirmish set in the Age of Mary Stuart, using The Pikeman’s Lament rules. Gyles took command of the followers of Mary Queen of Scots, while I commanded the troops of the Regent, James Stewart, Earl of Moray. 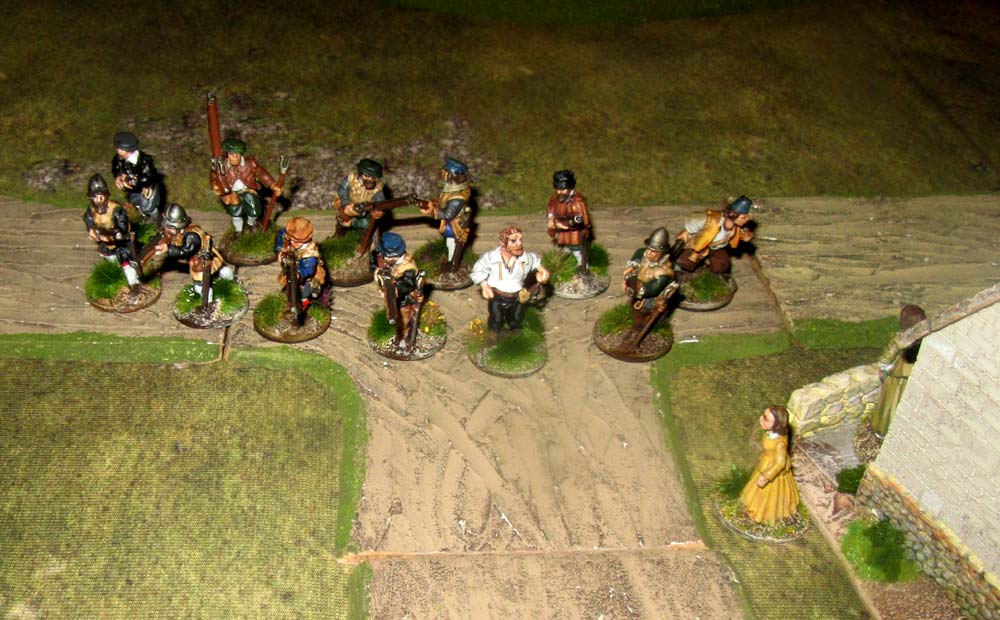 In this scenario, dubbed “Rescue Mission” in the rules, Moray’s wife, Lady Agnes Keith, had been captured by  pro-Marian forces, as she travelled from Edinburgh to Linlithgow. Archibald Campbell, Earl of Argyll was now holding her prisoner in St. John’s Chapel in Broxburn, some 10 miles west of Edinburgh. The Earl of Moray was determined to win her back. 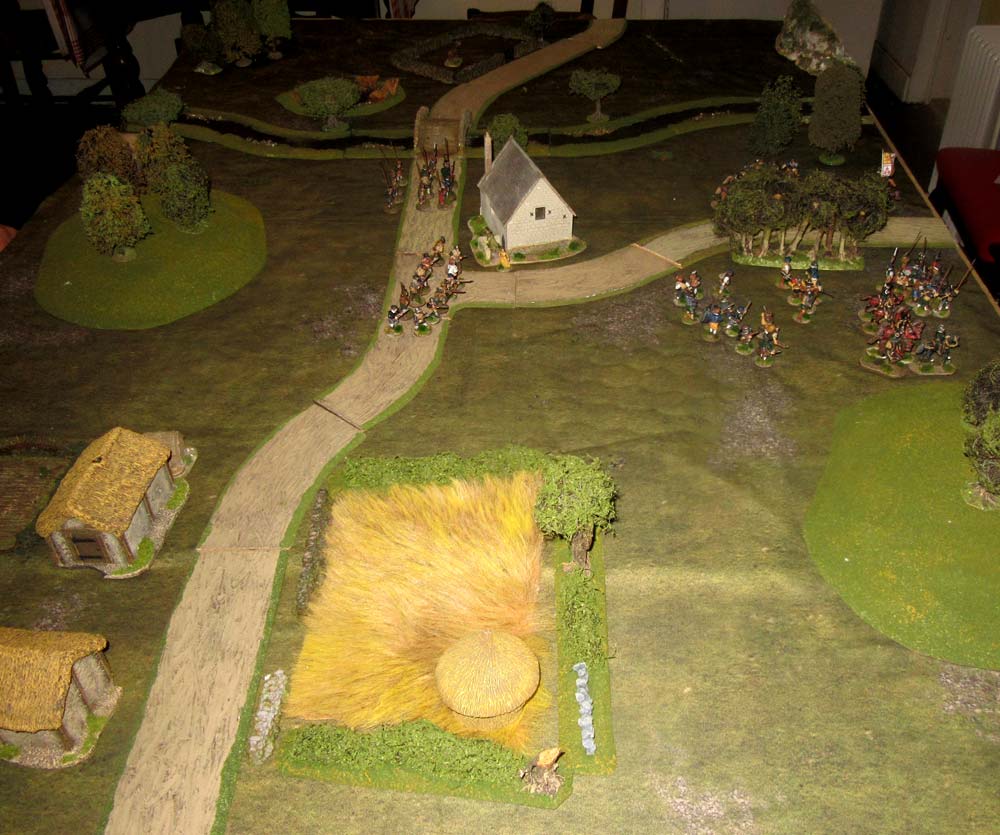 The game was played out on a 6×4 foot table, but as everything centred on the chapel, then we only really used the middle part of the table. Roughly half of the Marian force started the game around the chapel, while on Turn the rest appeared along the southern table edge (that’s the left-hand one in the picture above). The Rebels under Moray started the game deployed along the norther (right-hand) table  edge. 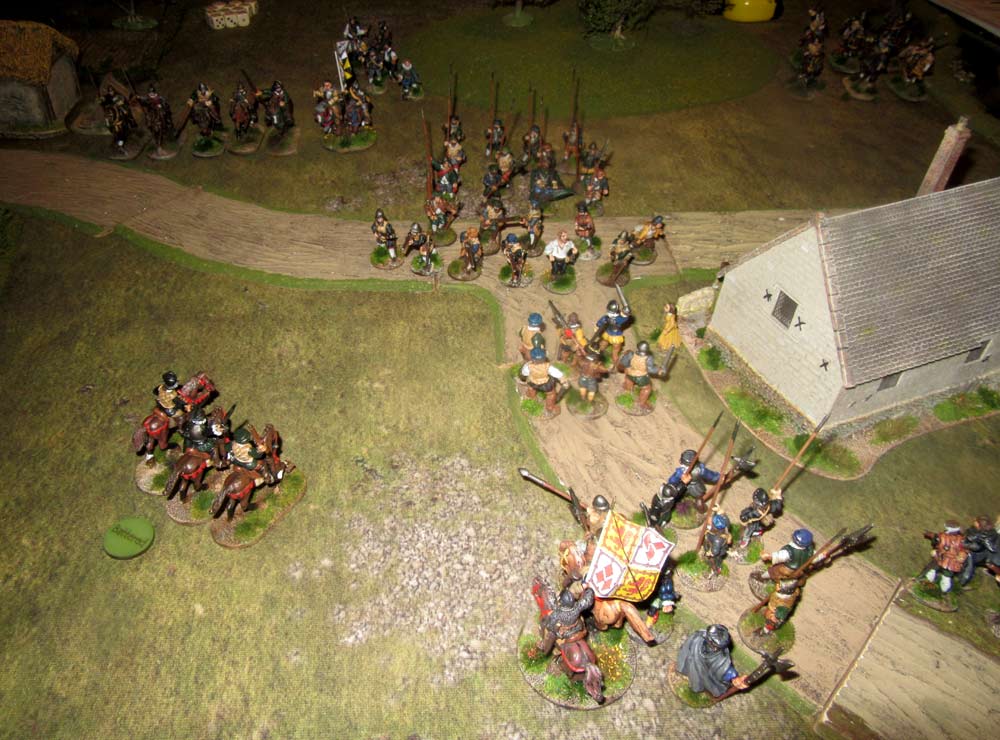 I began by a general advance on the chapel, with my cavalry on my flanks, and the pike, shot and forlorn hope of sword & bucklermen in the centre. Gyles force matched mine unit for unit, with his arquebus unit holding the T-junction by the chapel, with his pikes a little further back in reserve. 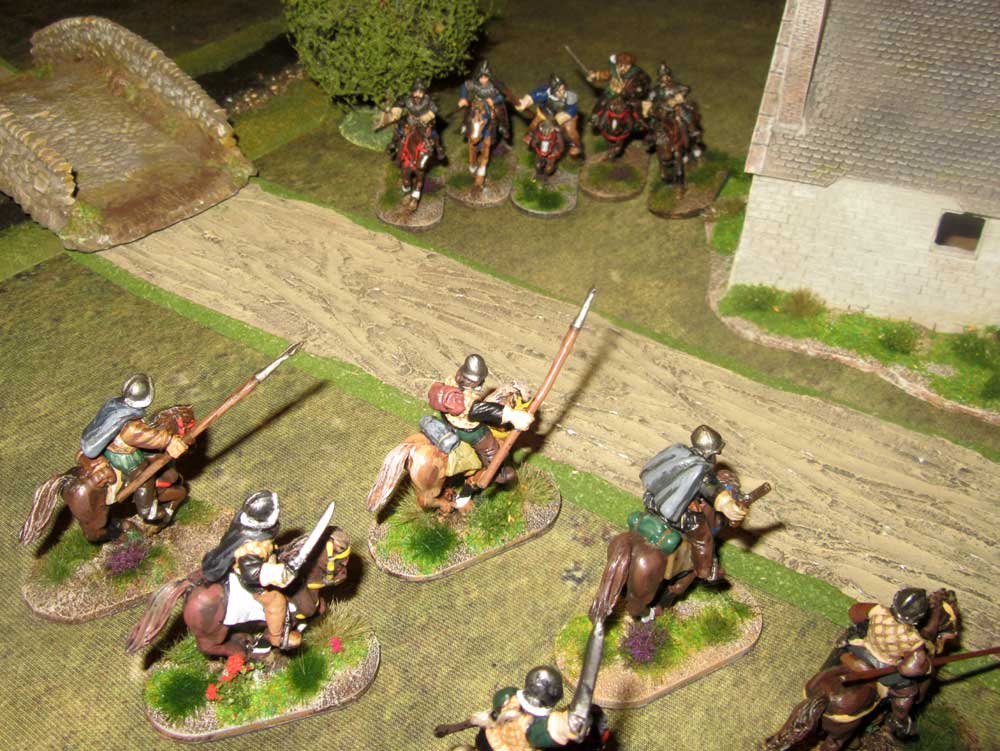 By the time I reached the chapel Gyles’ reinforcements were almost in play too. Fortunately for me, he tried to fire with his arquebus unit on two consecutive turns, and both times they failed to activate. At first I made the mistake of sending my raw cavalry in, using caracole tactics, then charging home. I simply lost half my unit in the scrap, and the remaining three horsemen pulled back to lick their wounds. On the fat side of the chapel two units of Border Horse simply stood and stared at each other, without moving. 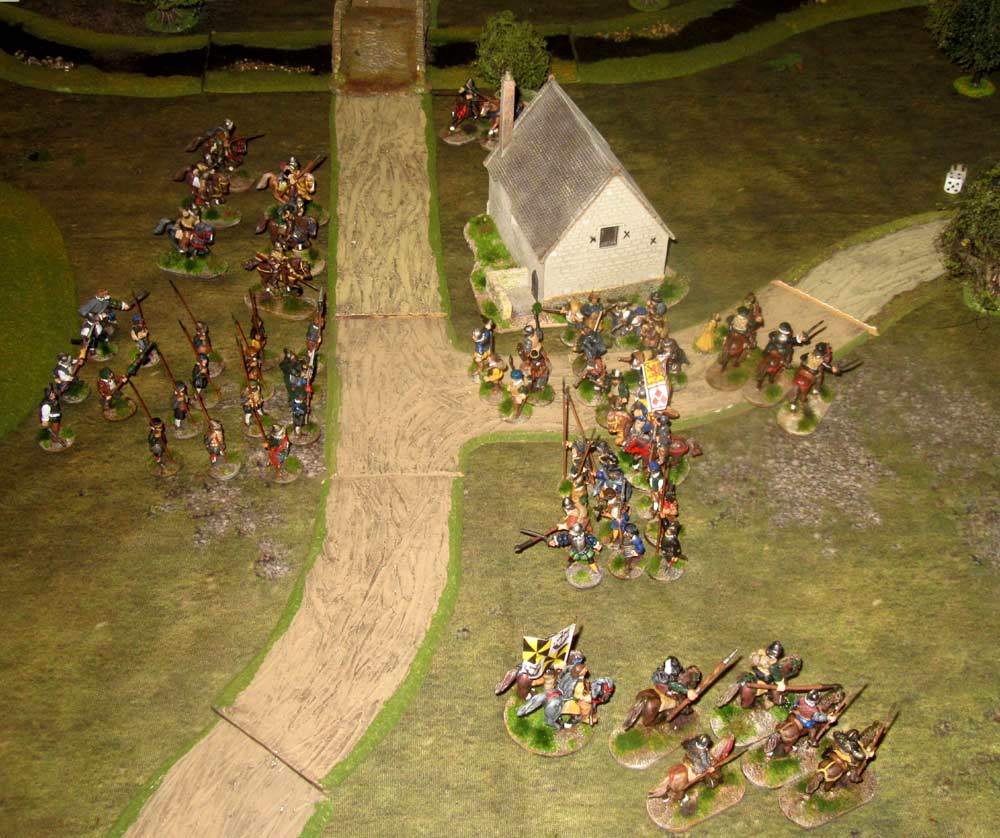 Then I had the smart idea to send in my kick-arse sword & bucklermen. They creamed into the arquebusiers, killing four of them and forcing a morale test. The result was they were lifted from the table. So, I could now bring up my own shot, who until now had been skulking in the rear. Even more importantly, it meant they could actually grab hold of Lady Agnes, who had popped her head out of the chapel to see what on earth was going on. 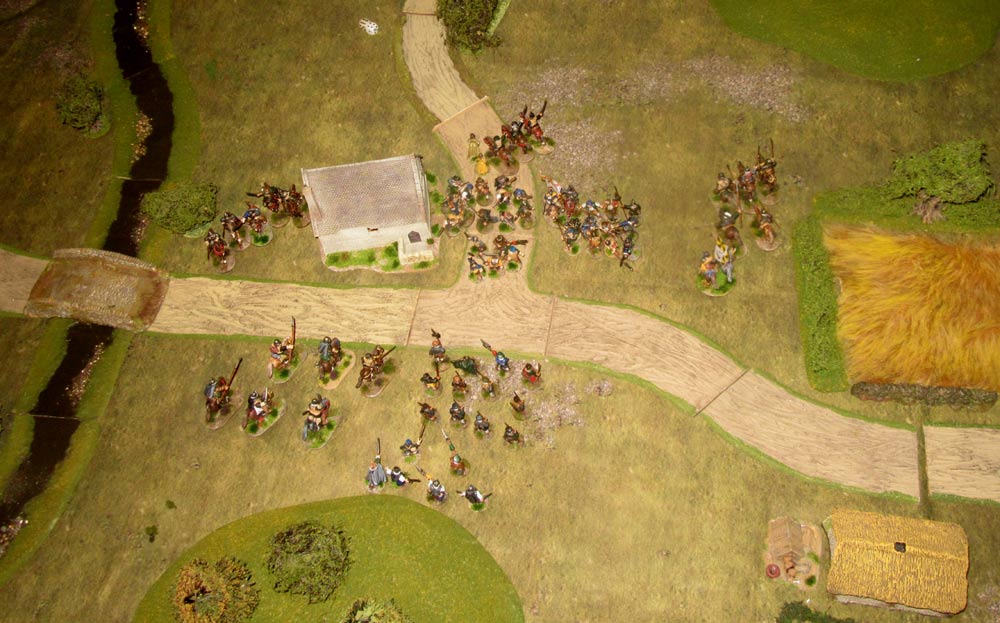 The shot though, were too useful a unit to waste as escorts. So, I passed her over to my half-strength unit of cavalry, who by now had lost their “Wavering” status. Being just three figures strong they weren’t much use, but at least they could guard their boss’s wife. The game now was all about getting Lady Agnes off the table, and covering the withdrawal. 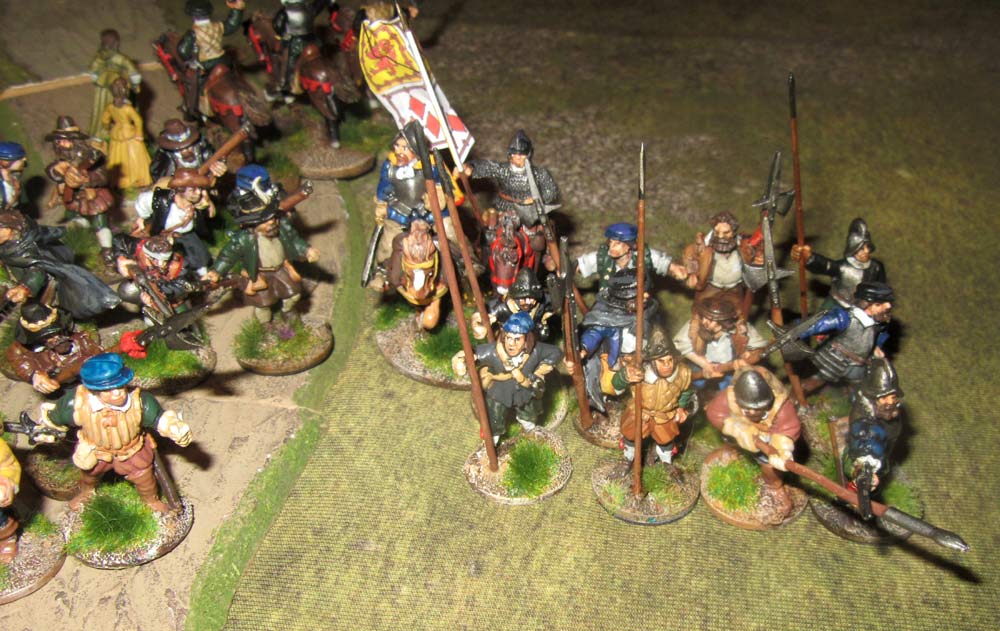 So, her husband the Earl of Moray brought up his pikemen, and formed a sort of protective line. However, the Earl of Argyll had other ideas, and led his own raw cavalry unit around their right flank, so he could intercept Agnes and her escort. One failed move activation for the escorts, and he’d be on them. 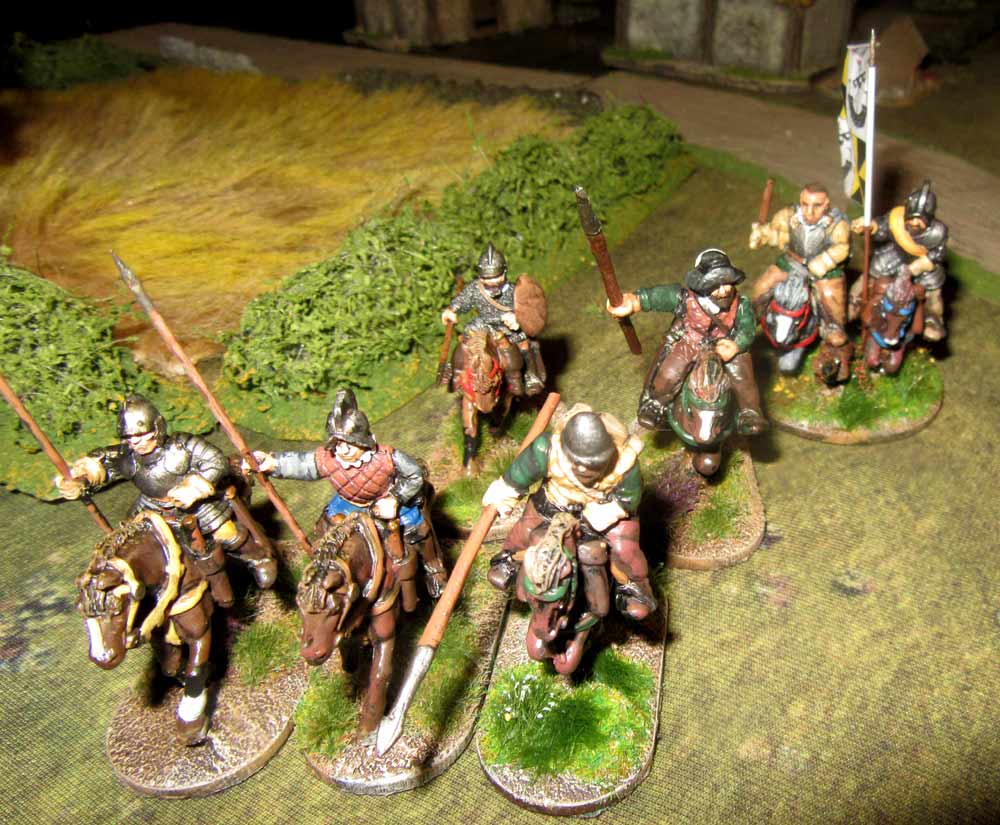 So, I stuck my pikes in the path of Argyll’s cavalry, then moved my shot up to fire at the Marian pikemen in front of them. When Gyles failed to activate Argyll and his cavalry, I sent my pikes in. Both sides suffered, but it wasn’t a killing blow. Gyles though, didn’t get a second chance. With his remaining cavalry failing their test and becoming wavering, I unleashed my sword & bucklermen, who chopped up the remaining Marian horsemen, along with the Earl of Argyll. technically he was “captured honourably”, so he lived to tell the tale – or become the centrepiece of another “Rescue Mission” scenario. 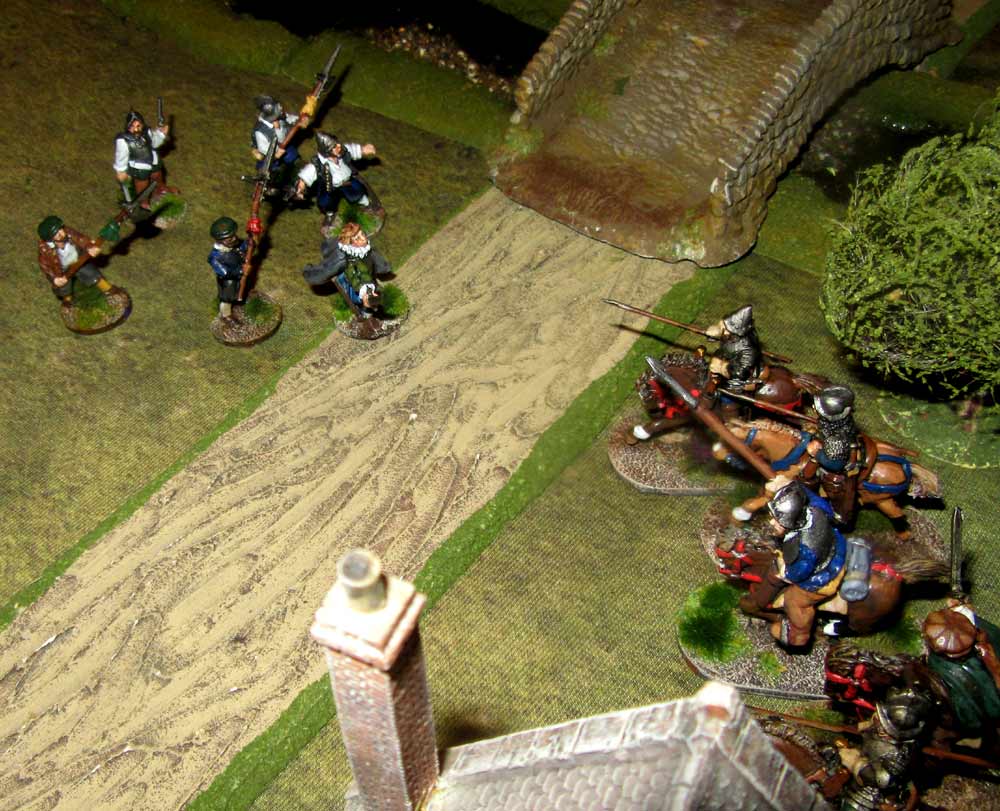 It was now clear the Rebels were in the ascendance. Gyles only had his pikes, forlorn hope (sword & bucklermen) and Border Horse still in the game, and there wasn’t much chance now of preventing Lady Agnes from reaching safety. He tried charging the border horse with his sword & bucklermen, but they just fired off their pistols and evaded. 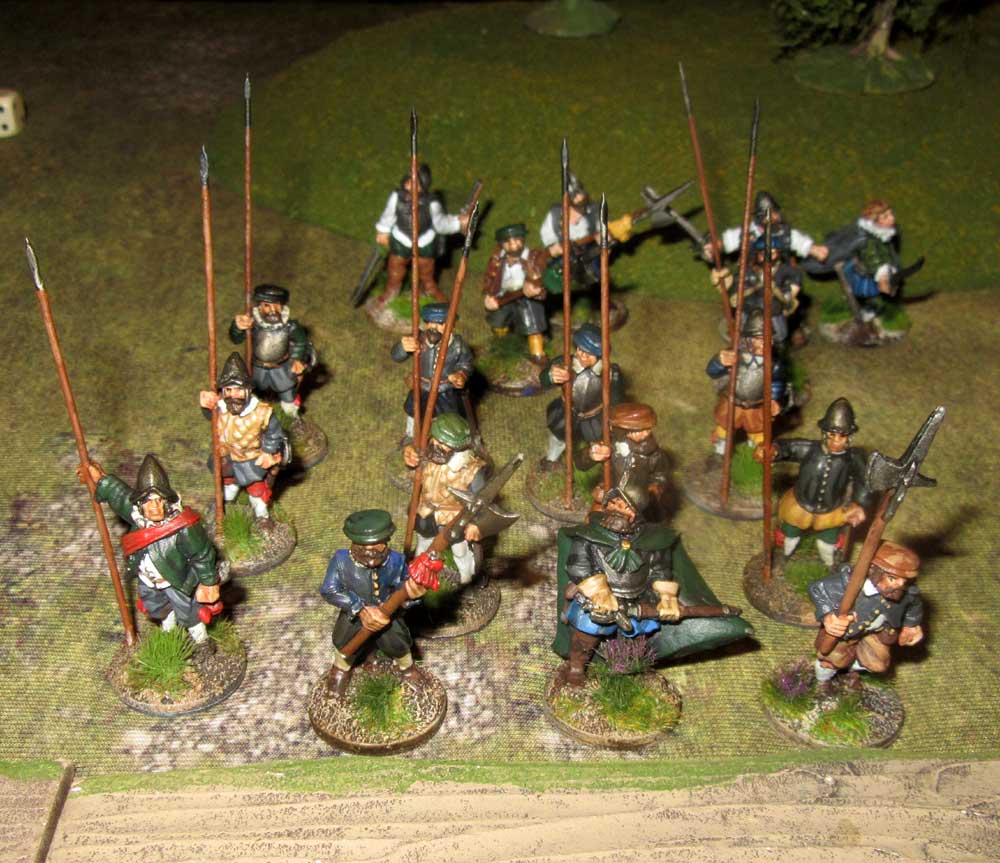 Gyles’ pikemen were still up for a fight though, and began moving forward. They though, were shot up by my arquebusiers, then hit by my sword and bucklermen. The pikes were forced to pull back, wavering, which effectively stalled the attack. That was the moment Lady Agnes made it off the table, bringing the game to an end. So, the result was a victory for The Lords of the Congregation – the anti-Marian rebels. No doubt though, the Queen’s men will be back in the fight soon. Gyles and I enjoyed our little game, and it’s spurred me on to paint up more figures for the period. The next batch will be Highlanders, which I can’t wait to try out on the tabletop. 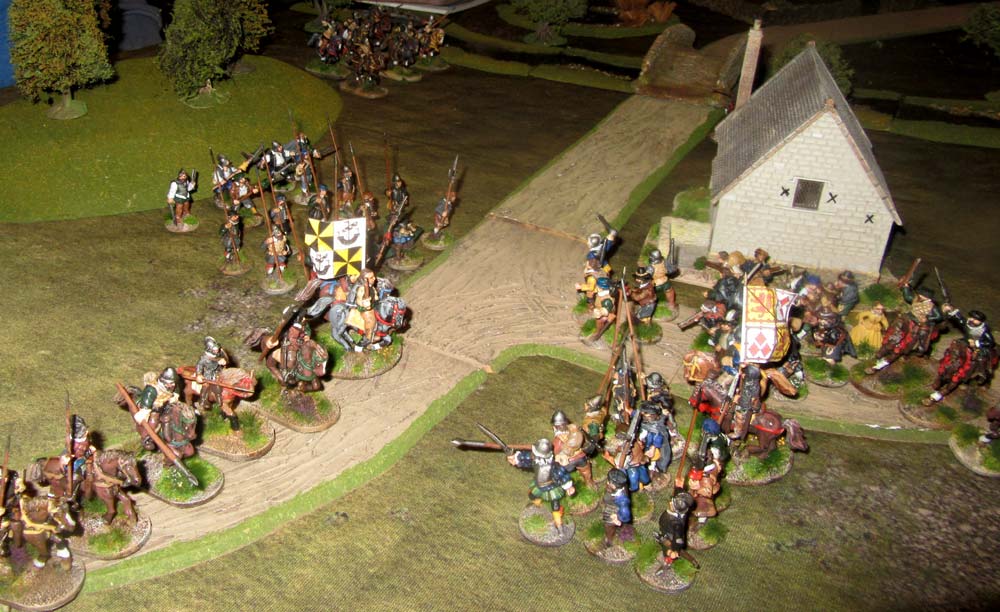