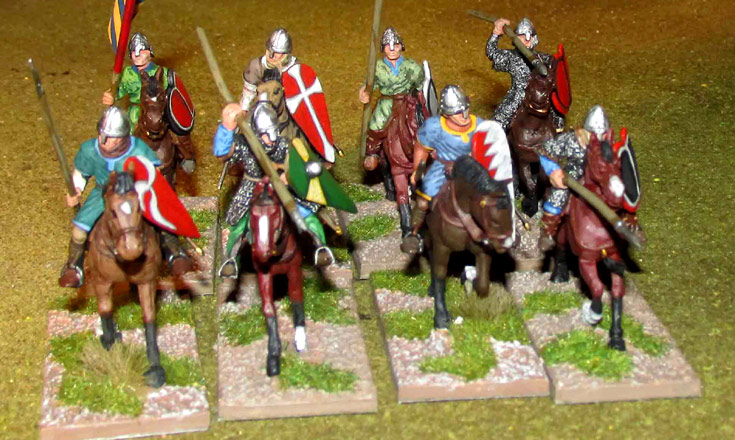 This week Alan Bruce decided to lay on a Saga game, using his First Crusade figures. Two of us – Joe and Gyles – hadn’t tried Saga before, so I was curious what they’d make of the rules. Actually, the rules themselves are simple. What really makes Saga are the battle boards and Saga dice. We’d concocted our own for the Saracens, but used the Norman battle board and dice for the crusaders. I know the outfit who produce the rules are about to launch a Cross and Crescent version covering the crusades, but for the moment we’re happy to play with what we’ve concocted, or looted from the internet.

We actually played two games. The first was a five point per side clash, near a little Arab village. Strangely the Saracens held back with their infantry, but led the attack with horse archers and Mamlukes. The game involved a couple of near-suicidal charges, where the horse archers were seen off by the crusading sergeants, backed by crossbowmen, and the crossbowmen themselves were whittled down by Arab arrows.

The game reached a speedy climax though when the Saracen leader placed himself at the head of a unit of Mamluke bodyguards, and charged into the Norman ranks…

The charge was pretty suicidal, but this was all about what was happening on the battle board. The Saracens had “revved themselves up” using their Saga dice and the battle board options therefore gave them a lot of extra “attack dice”. They slaughtered the Norman sergeants and spearmen, but they took a few casualties of their own. That left the leader and one follower within range of the still largely fresh unit of Crusading knights. In their turn Gyles and I decided to launch them at the leader, and we had plenty of “revving dice” of out own. The result was the Saracen warlord went down in a hail of blows, and the game ended in an outright crusading victory.

It was all over pretty quickly, so we decided to play a second game, this time pitting the Normans against my Vikings. The two sides have clashed before, and every time the Normans have won, because the Vikings lack bowmen and cavalry. However they have a few tricks of their own v- most notably a small unit of berserkers. True to form the Norman crossbowmen began picking off my Vikings from the start, and left them pulling back to behind a small hill.

Meanwhile a Norman charge by the sergeants was seen off by the berserkers, who slaughtered their mounted opponents, but lost two of their four men in the process. They fell foul of another Norman cavalry charge. Over on the far side of the hill the remaining Vikings formed a shieldwall and waited. The inevitable came quickly – a double whammy of crossbow bolts followed by a mounted charge by Norman knights. Poor Earl Thorfinn the Fat of Orkney went down under the hooves, and what remained of his warband fled the field.

The two games were fast, furious and fun. While I’m not really convinced by Saga as a simulation, it certainly produces an enjoyable game. Half the fun of course, is pondering what devious tactic to employ from the battle boards, and then hoping the enemy don’t have an equally devious ploy of their own…