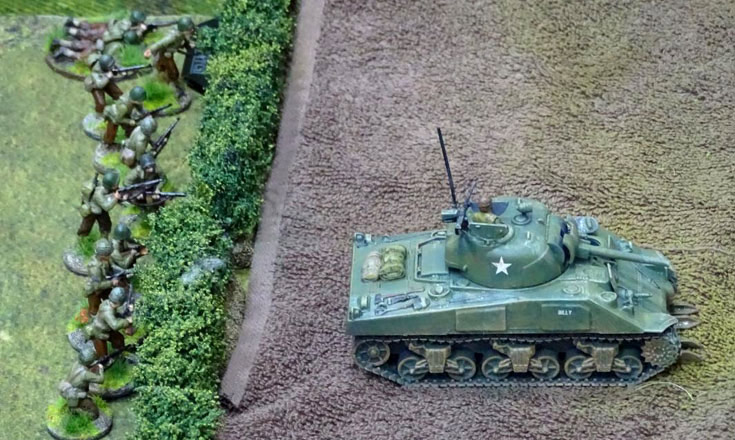 This was our second trip to this little corner of Normandy. A few weeks before, the American probe here got driven back by the Germans. Now we were back, and were out for revenge. As before, this game formed part of a scenario – the first one in the Lardy’s pint sized campaign “29 , Let’s Go!“. As before we played out on a 6×4 foot table, with Lindsay and I commanding the Americans, and Gyles the Germans. The game was set on the main road from Caen westwards to Isigny, a few miles south of Omaha Beach.

The last time, we had a platoon of American GI’s from the 29th Infantry Division, backed up by 19 support points. We blew it all on a platoon of three Shermans, and an extra BAR for our infantry. Gyles thwarted us with ease, using a roadblock to keep us off the main road, backed up by a panzershreck team, and a minefield to limit our route off the table. Our armoured thrust came to naught.

This time, with 6 more points to play with, we opted for a more subtle approach. We spent a compulsory 12 points on two tanks (the minimum we could take), but this time we didn’t go for a third tank. Instead we blew our remaining 13 support points on a 0.50-cal HMG team, a Forward Observer for a mortar battery, a sniper team and some engineers.

In the “Patrol Phase” the Germans pretty much repeated their deployment from our last game, with three jump-off points – one in the farmyard by the road, another in the orchard to the north, and the third a little way forward, behind a hedge a few yards to the east of the orchard, just to the north of the road. We managed to grab the big stone farmhouse with the avenue of trees leading to it, with other jump-off points in La Cambe itself, to the north and south of the main road.

We began by deploying around the farmhouse, and edging our tanks forward along the road. The Germans had 12 points to spend, but they’d taken a few casualties in the last game, and so all of their units were a little weaker than they had been before. They deployed in their forward position, and in the orchard, pretty much as we expected them to. We countered by opening up on them from the farmhouse, and bringing on both our mortar FOO and the .50-cal.

Then the big break happened. We got a double six when we rolled, and so could go again. We got it on the next roll too, which meant three free phases. Yay! We let rip with the HMG, as well as the GIs in the farmhouse, and duly eviscerated the Germans behind that forward hedge to shreds. The thing about a .50-cal is that it drops cover by a level, so the hedge didn’t do anything for the poor Germans. It was just like they were caught in the open.

That pretty much put Gyles on the back foot. He recovered well though, getting his own FOO onto the table, and then rolling a double six himself. So, he was able to bring down a ranging shot with his mortars, and decided to fire right away, and correct the aim later. So, instead of falling around the farmhouse, the “stonk” landed in the open, just to the east of the farm driveway. Things were starting to hot up!

This was a pest, as it blocked the line of sight of our .50-cal team. To make things worse, Gyles then started “walking” it closer to them, hiding in the hedgeline just outside the village. We hastily pulled back into the buildings, but lost one of the crew in the process. This though, moved the “stonk” just enough for our FOO to get an eyeball on the Germans in the orchard. That was the only likely place his FOO could be, so we brought our own mortar “stonk” down there.

That proved an inspired decision, as the barrage blocked the line of sight of the German FOO.  That meant they couldn’t walk” their barrage, while we were free to pound away. That’s exactly what we did, and managed to cause quite a few German casualties in the orchard. We didn’t really know it at the time, but not only did this include the FOO, but also the German platoon commander, who was injured and taken off the table.

German fire slackened appreciably, so we moved up our reserves. One squad deployed around the back of the farmhouse, waiting for the right moment to advance towards the orchard, while the rest deployed on the south side of the road, supported by one of our two Shermans. we made the mistake of underestimating the enemy though, and advancing out from the farmhouse. A heavy fire soon drove us back though, with a pile of hit markers and two casualties. So much for that gambit.

We were also running out of time. In the last game, this is what stopped us from getting anywhere near the German lines. Now, with the clock ticking, we didn’t want to repeat the mistake. So, we began advancing across the ploughed field to the south, and laying down a heavy fire from our positions to the north of the main road. Much to our surprise though, the expected wall of German fire didn’t materialise. Instead, we found that the Germans had pulled out. With mounting casualties, Gyles had decided to call it a day. So, the day was ours. Next time it’ll be on to Arthenay – the next stop on the road to our objective – the bridge at Isigny. 29, Let’s go!