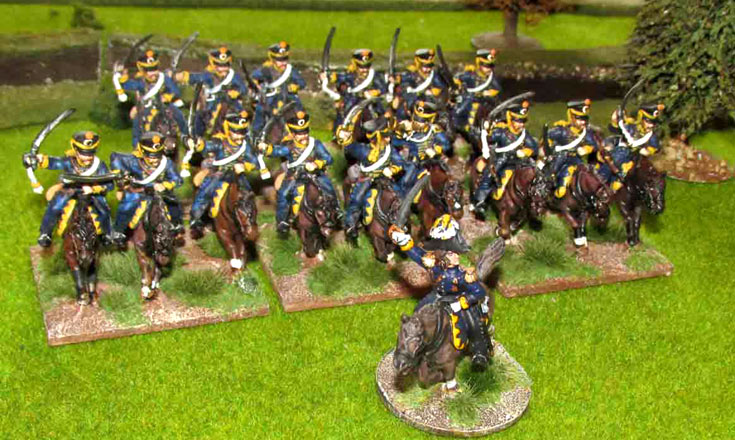 Three Napoleonic games in three weeks. People will talk. Questions will be asked. What on earth? Well, its all down to democracy. While I try to vary periods a bit to make for a more interesting range of games, the guys up here in Orkney wanted to fight another Napoleonic game. Specifically they wanted to try out another Charles S. Grant scenario, or “tabletop teaser”. So – here it is – Holding Action (2), from Scenarios for Wargames (1982). Charles writes a pretty good scenario, and this one looked deceptively lop-sided. During an advance a holding force was tasked with defending the river line A-B, and was deployed in a fork in the river, as shown in the map. That side was played by the Russians in our game.

The French – the attacker – started with a screen of light cavalry squadrons, with orders to probe forward towards the river. Behind them the rest of the army was advancing up the two roads, and entered behind the X-Y line. For our game we used four infantry battalions, two cavalry regiments and a half battery of horse artillery for the defending Russians, while the French got six infantry battalions, three cavalry regiments and a four gun battery.

The fly in the ointment- and there usually is one with one of Charles’ scenarios – was the hidden ford. you can see it in the top right of the map, but nobody else knew it was there. The French only learned about it when their cavalry scouts reached the river. The Russians learned about it a turn later, from a local priest. What began as a straightforward holding action now had a new element – a race for the ford. The attackers’ aim was to exit the table by the end of the day’s play – or fourteen turns in our game – while the defender had to stop them. the French had already concentrated their troops opposite the easternmost bridge, and it was a reasonably simple matter of diverting their troops to the right. On the Russian side it was a little harder, and the decision was made to use the cavalry to screen the two bridges across the river’s southern fork, while the bulk of the infantry would march along the north bank of the main river, and intercept the French as they crossed the ford.

The first French setback came when their limbered artillery was pounded by the Russian guns, which were deployed on the little hill north of the main river. The French plan was to deploy their battery near the fork in the river, to cover the approaches to the ford. In two turns though, the Russian gunners scored an “11” and then a “12” for their firing, which pretty much wiped out half of the French battery before it could unlimber. The French gunners never really recovered, and while they caused some casualties on the Russian infantry columns marching along the north bank they soon failed their morale test and dispersed.

Over by the ford the French advance was led by the mixed brigade of dragoons and lancers, followed by four battalions of infantry. They won the race to the ford, but the Russians were pretty close now, and it was clear the French would have a fight on their hands. Victory conditions demanded they exit a substantial body off troops off the north table edge. Do do that, they first had to protect themselves from the Russian infantry. To buy time the French dragoons – the lead unit – charged the Russian columns. The Russians hurriedly formed square, and the dragoons were repulsed. This pretty much set the tone for the battle north of the river – a hard-fought little action to buy room to manoeuvre.

Meanwhile the French screened each of the two bridges with a battalion of infantry, with a third battalion and a hussar regiment in support. Skirmishers crossed the small eastern bridge, and began harrying the Russian hussars deployed to the east of the village. This could only go on for so long – sooner or later the Russians were going to charge. To meet them the French battalion on the south side of the little bridge deployed into square, leaving the brigade’s skirmishers to goad the Russians into charging. Instead the Russian commanders sent a battalion of jaegers towards the bridge, which deployed facing the middle French battalion. The two battalions then began firing at each other across the small river, just to the west of the little bridge.

While all this was going on the French at the ford were trying to sort themselves out, hampered by a retiring unit of dragoons retiring through their ranks.  Seeing the Russian squares edging forward, the 6th Lancers – on their first tabletop outing – launched a charge to pin the enemy where it was. This would – we hoped – buy time for the French infantry brigade behind it to reform. Despite some excellent die rolling the lancers were bounced by the square. Inevitable really, but it looked good when the lancers went in! Then it was left to the infantry of both sides, with the French having the edge, being in a combination of line and column, rather than in square. It was clear that if this fight would continue the Russians would probably find themselves in real trouble.That’s when the Russian players (Joe and Gyles) unleashed their own lancers.

The only way to cross any of the bridges was in column of companies – three figures wide – which meant they’d lose their charge bonus. Still, they were lancers – Polish ones in Russian service – so surely they’d skewer the hapless French infantry, right? Actually they almost did. The French battalion managed to form an emergency square, and the Russians were forced to retire. They then launched a second charge, which clattered over the western bridge again, and slammed into the square for the second time. Once more it was bounced back, but this time the Russian lancers suffered a “retreat” result. This, of course, was what the French hussars had been waiting for.

While the Polski Ulhan regiment had been hurling itself against the square the French 7th Hussars had worked their way around the back of the square, and formed up into column of companies. When the lancers retreated they launched their own charge over the bridge, catching the lancers in the rear. The result was inevitable – the Poles were scattered, and although the hussars had to fall back and reform they’d cleared the western bridge. The Russians now had no reserves over there. Almost everyone else was involved in the fight for the ford, apart from the Russian hussars and jaeger battalion fighting around the eastern bridge. Over there the Marioupol hussars had finally been goaded into charging, with inevitable consequences. The jaegers were forced back on the village too, after coming off worst in the firefight across the stream (thanks in part to a timely French “double six”). Over there the French reformed ready for an advance over the bridge, while to the west the French were crossing the western bridge in strength, heading for the northern bridge spanning the main (northern) fork of the river.

Back at the ford the two sides were engaged in what was clearly a protracted fight the Russians weren’t going to win. It was only a matter of time before the Russian cavalry reformed and moved off the table. So, with the French poised to exit the northern table edge in two places the game was brought to a close. Technically the game was a draw, as the French hadn’t fulfilled their victory conditions – moving troops  off the table edge. However, they were on the cusp of doing so, so if the game was a draw, it was one in the French favour. The award for unit of the game though, clearly went to the half battery of Russian horse artillery on the little hill. Not only had they outshot a battery of French guns, but their continued fire had helped prop up the otherwise lacklustre Russian defences. Well, this being our third Napoleonic game in as many weeks I pleaded for a change of period next week. We’ll be doing something else, but the Napoleonic bug is well and truly biting, and the guys are busy raising Austrian, Spanish and Bavarian contingents to augment my own toys. Vive L’Empereur etc etc!