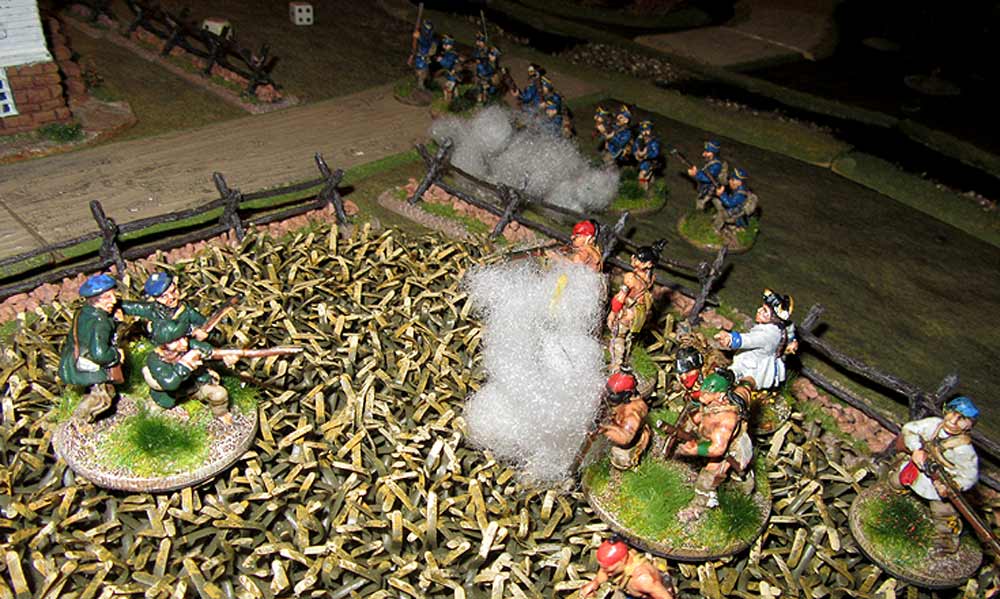 The wargame club was closed due to snow this week. Actually, there was no snow here in South Ronaldsay, but the west side of Orkney got blasted by it. So, my near neighbour Sean 2 came round for a small game at my place. He hadn’t played a French & Indian game before, so we opted for that. In this one, the French and Indians were attacking a village in upper New York colony. 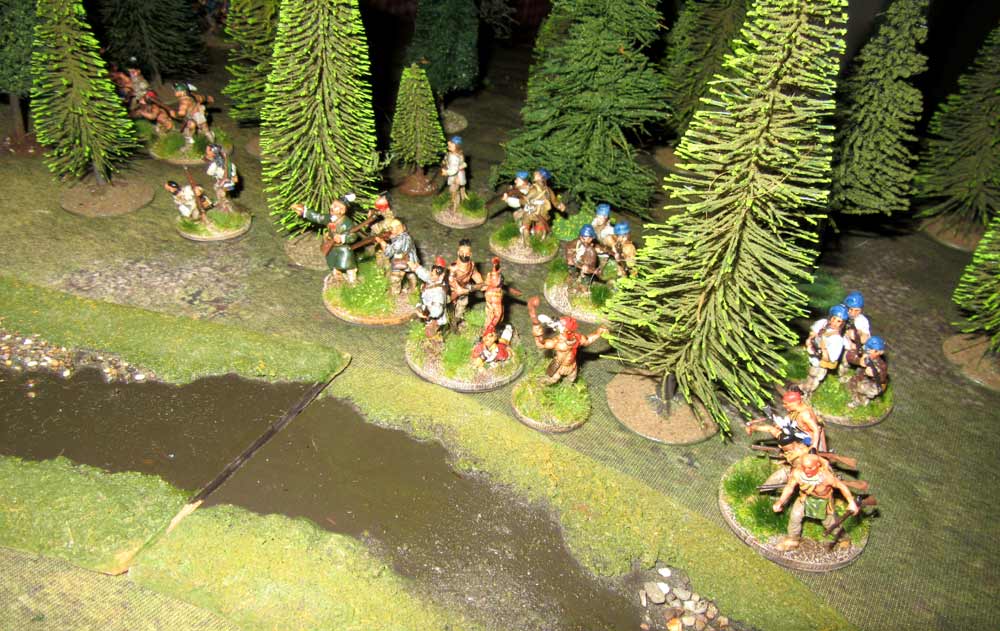 The objective was for the raiders to capture and burn the church, where the womenfolk and the preacher were hiding. Meanwhile, Whitehall’s menfolk had picked up their  rifles and were trying to hold off the enemy until help arrived. We played the game on a 6×4 foot table, dominated by the village, with the Indians and their French allies erupting from the woods on the northern short table edge. 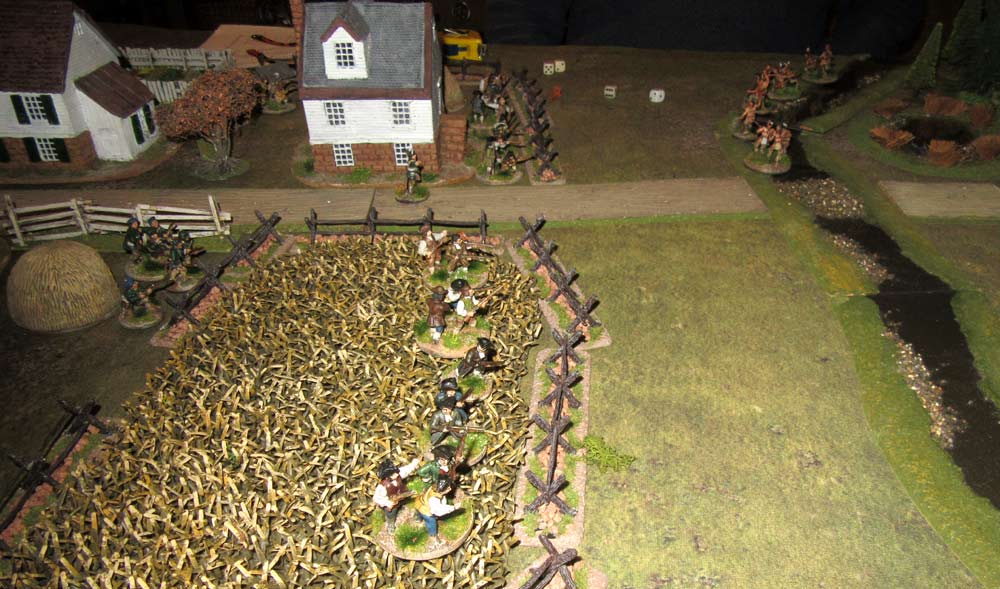 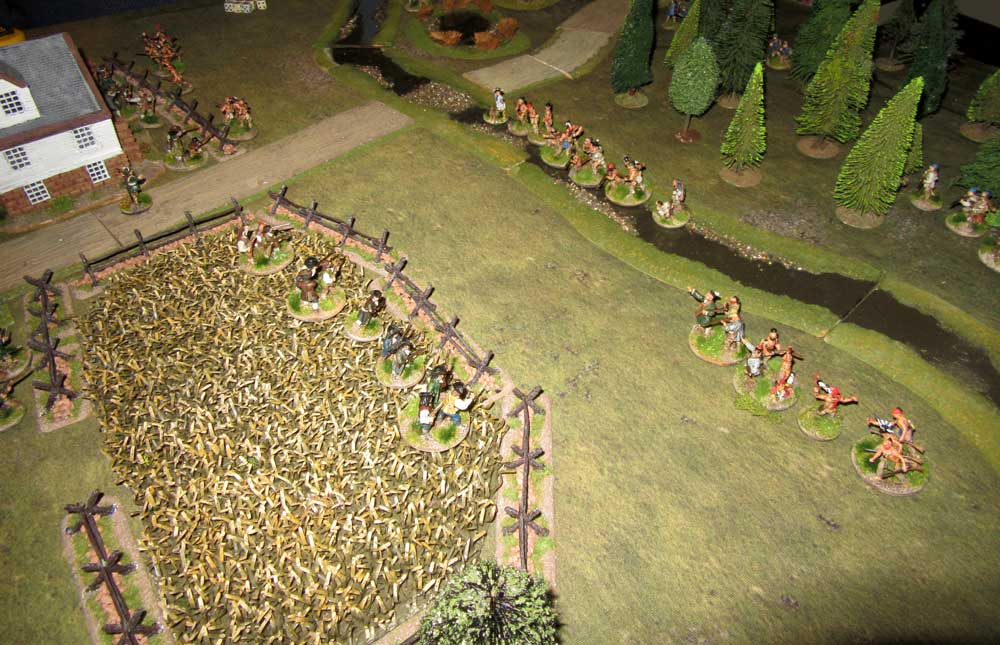 The assault began well, with the Hurons crossing the stream and advancing on the waiting lines of local militia. The defenders’ musketry was poor, and only a few attackers were felled. The Indians used skirmish tactics to advance and lay down some skirmish fire, which was distinctly more effective. the militiamen started taking casualties, and once weakened they were fair game. 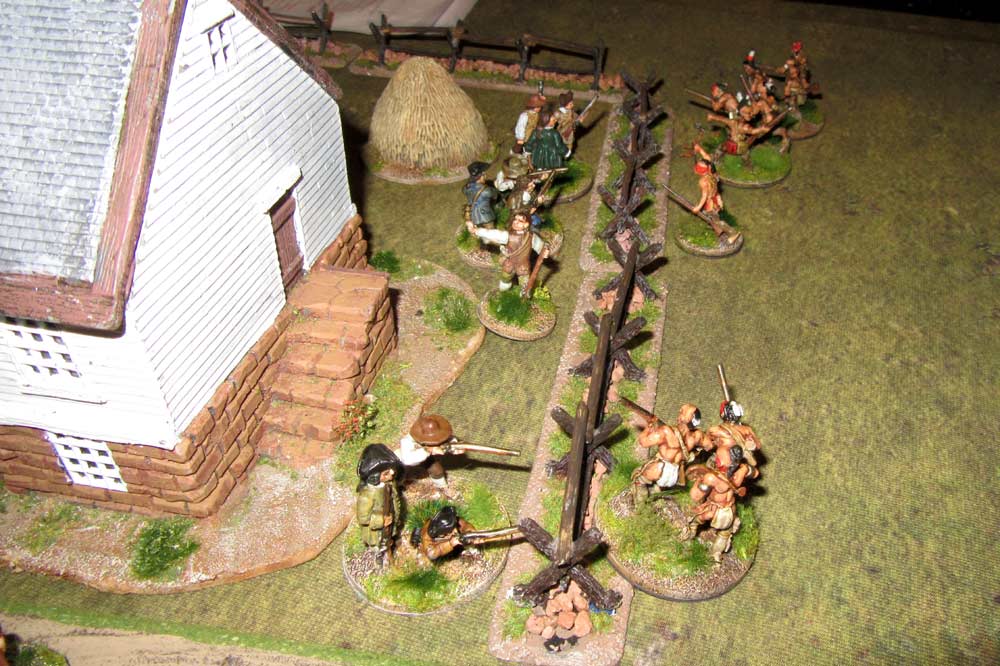 On the French right flank – the west side of the table – the Huron warband there charged home, and piled into the militia lining the fence there. Surprisingly the militia did better than expected, but they were still forced back. Then the Indians pursued, and the surviving Whitehall militiamen broke and ran. This of course didn’t bode well for the womenfolk in the church… 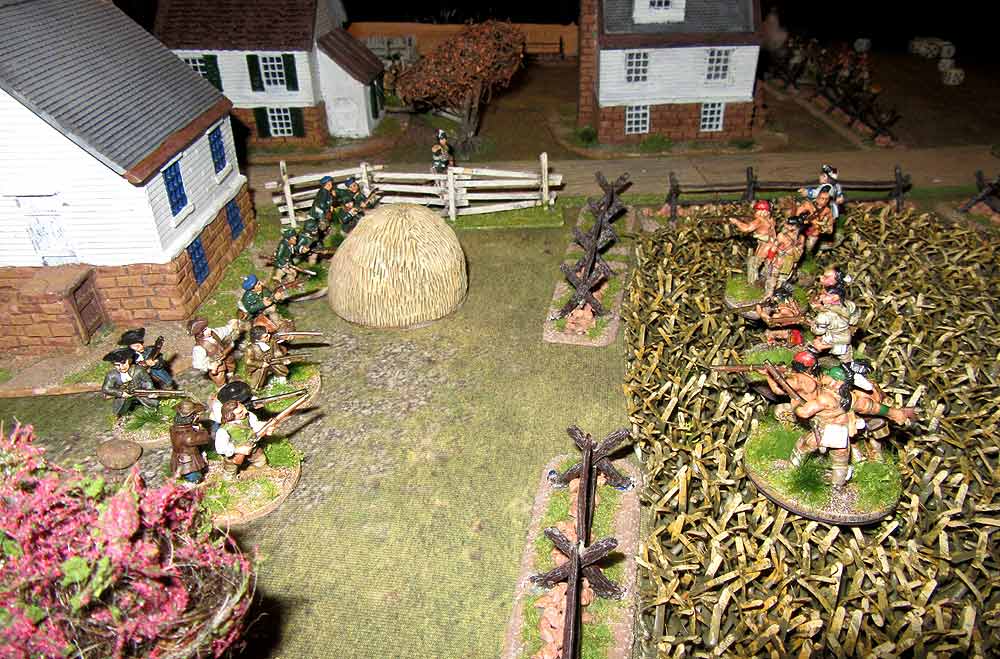 On the French left there were two warbands in the advance, plus a unit of French militia, so this was definitely the main punch. Once again the militiamen lining the split rail fence at the edge of the cornfield were driven back, and then routed as the charge continued. What saved the day were the Rangers, who halted the Indians through close-range fire. This though, was just a temporary reprieve. 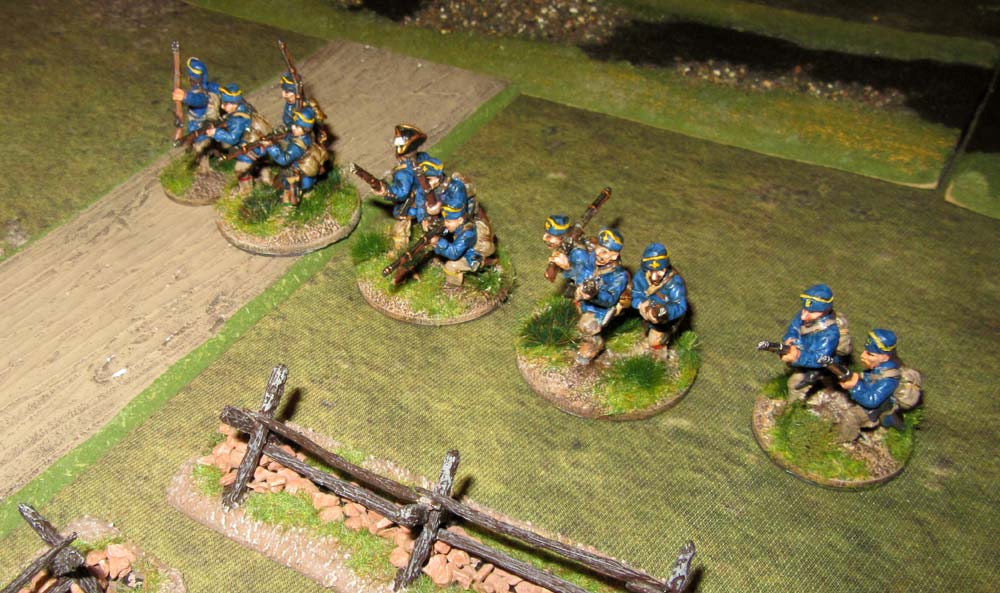 On the west side, the Indians were being whittled down by the frontiersmen, who drove them back, and also forced the Coureurs de Bois to retire. Just then the British reinforcements  began to arrive – a patrol of 12 light infantry and 12 regular line troops, sent from nearby Fort George. So, all the British had to do was to hold on – but unfortunately the Rangers never got that memo… 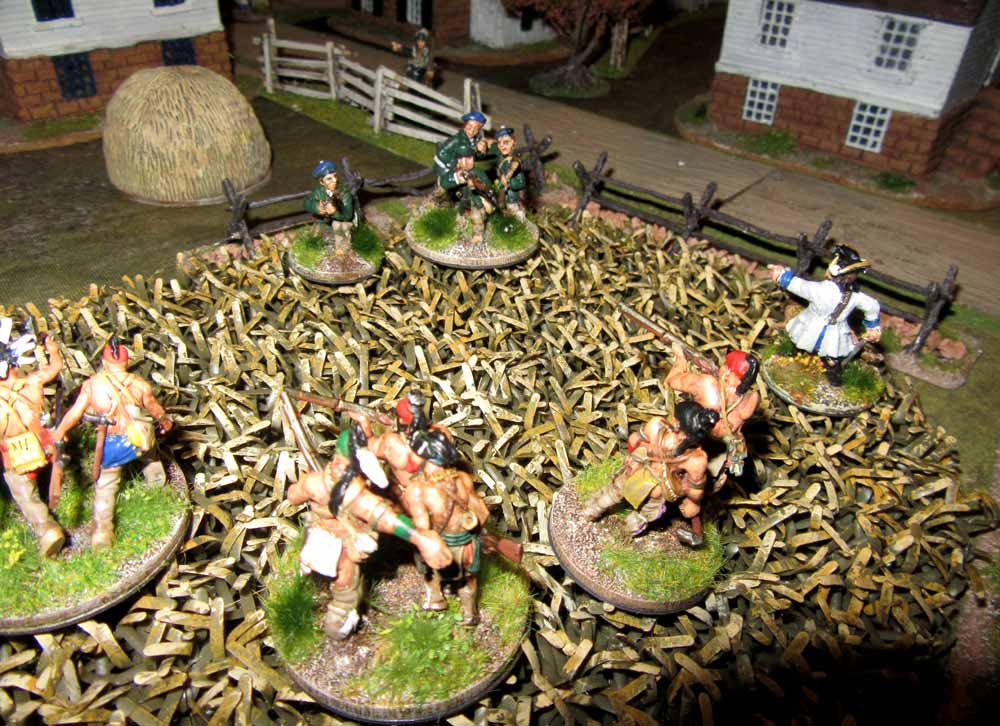 When trying to activate them I rolled a double 1, which translated into an impetuous charge, straight into a cornfield filled with Huron warriors! In the end only one Ranger was left standing, and he soon failed his morale and fled. By then though, the British light infantry had seen off the Indians and Coureur de Bois on the western side of the village, and order of sorts was restored. 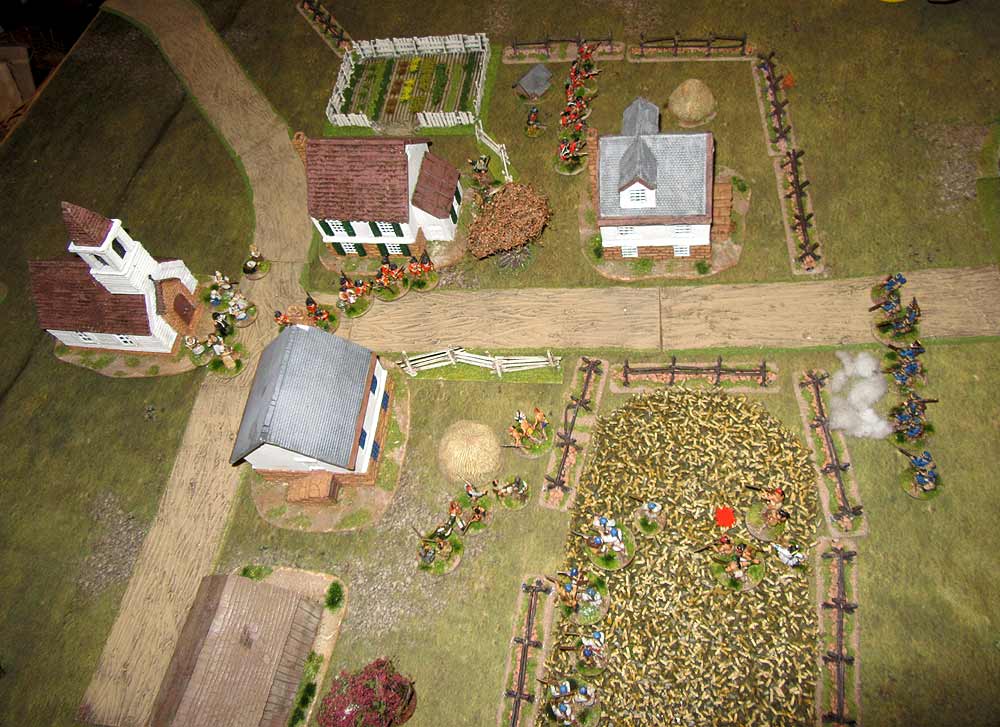 The British line infantry deployed near the church, just as the last Ranger fled. By now the French & Indians had been pretty badly shot up, and Sean realised he was unlikely to be able to reach the church, let alone raze it to the ground. So, we called it a day. As for who won, although the French didn’t get their objective,  they really deserved a win for leaving Whitehall full of grieving widows. Finally,  sorry for the badly blurred picture, but I thought I’d show the French objective – the church and the womenfolk. 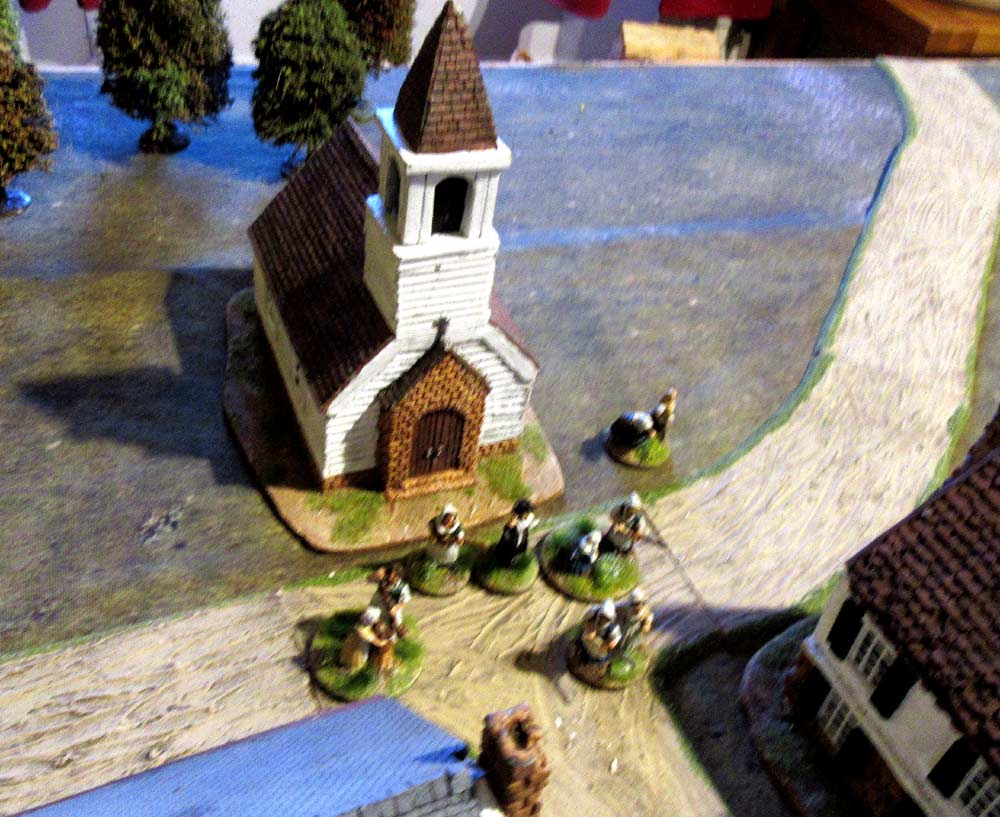