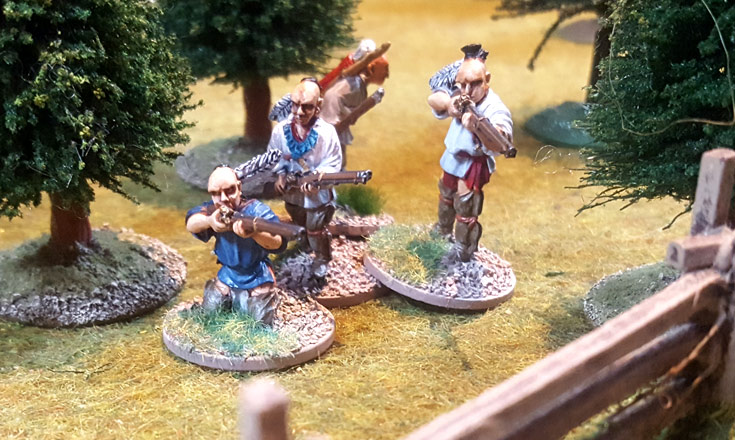 The little hamlet of St. Vincent lies in the heart of Vandalia County, in the backwoods of Britain’s North American colony. It originally consisted of a church and four houses, but when the church was burned in a raid the locals replaced it with a stout blockhouse instead. So, this little community occupied a sort of two foot square in the centre of our table, with four houses inside the perimeter, and a bloody big blockhouse. In our game this tranquil little community was the subject of a raid by French Canadian militia, supported by some mean-looking Indians.

Outside the 2×2 foot square occupied by the hamlet, the rest of the 6×4 foot table was covered in woods, apart from a couple of tracks leading off the two longer sides. this then was the scene of this week’s game – a small action fought during the French & Indian War. Bill Gilchrist supplied the figures and the blockhouse, the four buildings were mine, and the tree and mat were looted from the club stash. Before we go on I have to say that the photos weren’t mine either. My camera needed to be recharged, so I relied on Campbell’s trust phone instead. Thanks, Campbell, for saving my bacon.

Each building contained a small group of 4-5 civilians – all women and children. In the blockhouse and two buildings were the menfolk of the settlement, formed into three 6-figure units of armed militia. Somewhere in the area was a patrol of British regulars-  two units of 8 light infantry apiece, but until they appeared these militiamen had to literally hold the fort. The fortification in question, Fort St. Vincent, was an impressive structure dominating the middle of the table. there was only one way in, through the main gate, and the upper storey was loopholed for all-round defence. It certainly looked the part, and appeared to be a tough nut to crack.

The French had an 8-man unit of militia as well, but these Quebecois were much tougher cookies than the armed civilians. They also had a 6-figure unit of even harder Coureur du Bois, and five 6-figure units of Indians. Following them was a unit of 12 French regulars. Bill umpired, while I took charge of the settlers, and a newbie called Alasdair the British reinforcements. Campbell, Bart and Peter acted as the dastardly French and Indians.

The game began with a lot of long-range shooting. The Indians and Canadian militia moved up through the woods, and then began blazing away. I rather foolishly decided to move my unarmed civilians into the blockhouse, which of course meant they had to leave their houses and run. Not all of them made it. In fact, most were gunned down, scalped or generally dismembered along the way.

The menfolk did what they could, but Indians skulking in woods are difficult to hit. Still, apart from the deaths of many of their women and children they were doggedly holding on. I thought we’d manage to hold until the British regulars arrived, but at the start of each turn Alasdair rolled awful dice, and so for a whole string of turns the reinforcements never appeared.

On the south side of the hamlet the Canadian militia had formed a firing line and were busy gunning down the defenders and civilians alike. Then they vaulted the fence and began setting fire to the building in the south-east corner of St. Vincent. The defending unit of armed settlers only got out in the nick of time, losing two of their band as they fell back to the blockhouse. By the next turn the building was blazing nicely.

Things were now starting to get pretty hairy for the defenders. The Indians set fire to the unnocupied building in the north-east side of the village, but the defenders in the north-west building forced them back. They also drove back a unit of Indians which had entered the hamlet, specifically to try to chop up the fleeing women and children. The defenders in the fort also shot up anoth third Indian unit, but not before it did a hatchet job on the civilians.

Finally though, Alasdair rolled what he needed, and the tardy British regulars appeared on the southern table edge. Even then though, things didn’t go smoothly. They got into a firefight with the Coureur de Bois and some Indians, and got the worst of the exchange, being forced to retire. It took them another turn to get back into the fray, by which time things had changed over in downtown St. Vincent.

The Indian morale had broken. Mounting losses meant that they were now shirking in the woods, rather than closing within range of the two remaining strongpoints – the blockhouse and the building in the north-west corner of the hamlet. So, the French players whistled up their reserve – a unit of 12 French regulars. Surely their firepower would prove decisive. They marched out of the woods and formed up in the open, on the road leading off the eastern table edge. this would be the crucial moment of the game.

Their neat firing line looked great, but it was the armed settlers who fired first, killing two of the bunched up French soldiers. In the firefight that followed the French volleys accounted for two blockhouse defenders, but the French lost two more regulars. In the end the regular unit retired back into the woods to lick its wounds. That pretty much signalled the end of the game. If the regulars couldn’t take on the blockhouse, then what chance had the Canadian militia and Indians? They contented themselves with setting fire to another undefended building, and keeping out of harm’s way.

On points though, the game was a clear French win. After all, they’d killed over half of the settlement’s women and children, and half of the armed menfolk. The ineffective British regulars had taken two casualties, and the French regulars four. Some 14 Indians lay dead, and three Canadian militia and Coureur de Bois. Still, despite the higher French casualty list they’d won their objective – killing over half of the defenders, and burning the majority of the buildings. So, a hard-fought French win,. The outcome would have been very different though, if the British light infantry had turned up earlier, and actually did something. Still, there’s always another day.