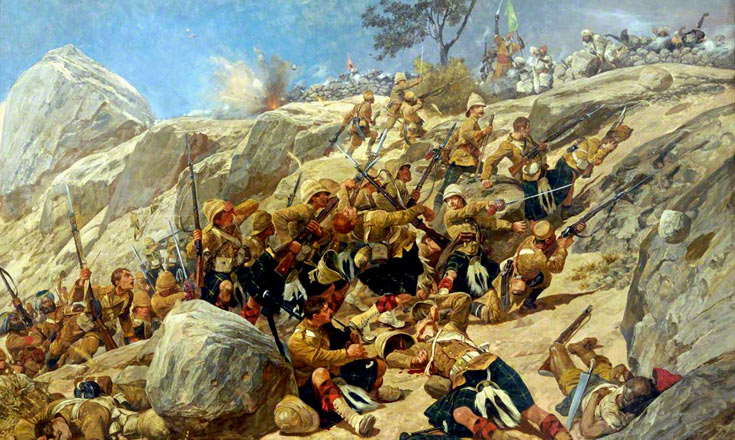 I can remember the very day when I was first hooked by this period. When I was about twelve I went on a school trip to Edinburgh Castle, and for me the highlight was the Scottish War Museum. In it was the usual collection of uniforms, weapons and mementos,  but what really too my breath away was a huge painting on the wall. It showing Highland soldiers in kilts and khaki jackets, scrambling over rocks and towards an enemy hidden from view on the heights above them.

It was only later I learned the painting was by Allan Stewart, and it was called “The Charge of the Gordon Highlanders at Dargai”. This was stirring stuff. Over the years I’ve dabbled with this period – first in 15mm with old Peter Laing figures, and then with figures that actually looked human. Nowadays I have them in 28mm.

The assault on the Heights of Dargai (1897) was fought on India’s North-West Frontier, but for some reason when I did begin fighting colonial actions in 28mm about a decade or so ago I went for Darkest Africa instead. We did this for years, but it wasn’t really a major period. However, about once a year someone would field a colonial game at the club, usually set in Egypt or the Sudan in 1882-85, and that gave me enough of a colonial “fix”.

Then, the AB1 group I game with a few times a year decided to run a Sudan game. So, I bought myself a horde of plastic Fuzzy Wuzzies. Painting them up was easy, and they really looked the part. However, the game itself wasn’t really as much fun as I’d hoped.

While Black Powder works fine for other periods, I’m not convinced it really works that well for colonial warfare where regulars fight irregulars. To be honest, I was still harking back to the inspiration of my youth – and I wanted something that offered scope for deeds of derring do, and pluck in the face of the savage foe.  I also want room in my games for gunboats, trains and other symbols of Imperial power and civilization, mainly because they look so terrific!

Lately I think I found the answer in The Men Who Would Be Kings. This is more of a grand skirmish set, which fits the scale I want to play in, and it has scope for pluck. Having read all the Flashman novels I’m convinced that this is a great period, where caddish officers twirling their moustaches and enthusiastic but foolhardy subalterns abound.

We also tinkered with adapting Muskets & Tomahawks for a series of Indian Mutiny games which culminated in a mammoth Siege of Kirriepur game run by the League of Gentleman Wargamers in 2017, and an article in Charles Grant’s Wargamer’s Annual.,  Actually, my main colonial period is really the Indian Mutiny, as I love its scope and colour. We’ve tried various rules for it over the years, but after a long dalliance with Sharp Practice I’ve pretty much settled on the slightly smaller scale The Men who would be Kings rules. That means I use the same set of rules for all three of my colonial periods or conflicts …the Indian Mutiny, The North-West Frontier and The Second Boer War. I’d love to do other ones like The Zulu War or the Ashanti War, but for the moment the constraints of sanity are keeping me in check.