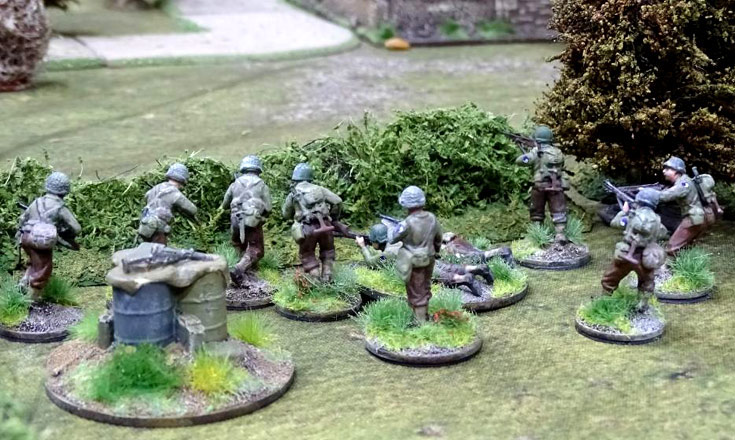 This game is actually the opening scenario from the “pint-sized campaign 29, Let’s Go!  from the Two Fat Lardies. It all centres round the US 29th Division in the days after landing at Omaha Beach, and the drive inland towards Isigny.  In this game, an American probe down the road heading east from La Cambe runs into some serious opposition. We played it out based roughly on the Lardy’s scenario map, on a 6×4 foot table.

In this game, Gyles brought his Germans along, and played with them, while my Americans were bolstered by a tank and some extra BAR teams from Lindsay’s toy box. We both had a standard platoon, plus extra points. We spent ours on three Shermans (we had to have a minimum of two of them), plus extra BARs, while Gyles used his on a mortar battery observer, a minefield, entrenchments, a roadblock and an MG-42 MMG and crew.

We started with the Patrol Phase, which saw the Americans establish jump-off points in the outskirts of La Cambe, and in the big stone house to the north-west of the hamlet. The Germans had theirs behind their own front line, and in a small field to the east. We then got down to the game, with us bringing on our column of tanks on the road, and a squad of infantry in the stone farmhouse.

Things started to go wrong pretty quickly. First, Gyles deployed one of his three German squads behind a hedge in front of his main line, just north of the road. It started shooting up our troops in the stone farmhouse. As if this wasn’t enough, he used his CoC dice to bring on an ambushing panzershrek team, which brewed up our leading Sherman, just as it swung off the road to work its way around the roadblock. As we didn’t have anything deployed which could shoot back, it managed to “shoot and scoot” with dastardly aplomb.

I switched the two remaining Shermans over to the left, and deployed them in the ploughed field to the south of the road. Then, I brought up another squad of infantry, who leaped over the hedge and started advancing towards the enemy line. Gyles had deployed his minefield just to the south of the farmhouse on the western table edge, so we couldn’t just head for the gap and exit the table. That’s what we needed to do to win. So, we had to advance a little more cautiously, shooting up the enemy as we went.

Next, the Germans deployed a squad in that little farmhouse, and began shooting back. To mess us up even more, Gyles also brought on his Observer, who began ranging in the German mortars on the stone farmhouse. Things were starting to get uncomfortable, but the onus was on us to attack, so we couldn’t waste any more time. We needed to whittle down the defenders, and then press on.

Over on the northern side of the road the firefight was stepping up in intensity, with the Americans in the stone farmhouse and the Germans behind the hedge trading lead with each other. The Germans had the edge in firepower though, thanks to their MG-43 team, and American losses began to mount. Things got worse when the mortars finally ranged in, and began falling around the farmhouse.

By now though,m the tanks were adding the weight of their fire, and that German squad to the west of the main German line was really beginning to suffer. To add to the pain, Lindsay deployed our third and last squad on the western side of LA Cambe, where it could add its long-range firepower to the mix. However, all Gyles needed to do was to move his mortar barrage a little, and this effectively blocked their line of sight. Then the mortars worked on towards the south, so they could take in some of our squad advancing across the ploughed field.

The squad in the field began suffering badly, but the tanks merely buttoned up and trundled forward, to keep the pressure on the Germans.  I now had a shrewsd idea where the Observer was hiding, and so while one tank began shooting up the Germans in the farmhouse at the side of the road, the other one hosed down the hedgeline just north of the road – the one bordering the orchard.

By now though, we were running out of time and morale points. Our morale wasn’t high to start with, and it was now dropping low enough to affect the number of Command Dice we were rolling. The Germans were suffering too, but we still weren’t making enough of a headway. Effectively, all out infantry was shot up and pinned down, and it was our two tanks which were hurting the enemy.

We were also running out of time as Lindsay had to attend an emergency club meeting. So, it looked like we wouldn’t reach a conclusion after all. The game then, ended in what was essentially a draw, as we hadn’t reached a conclusion, but it really was a German defensive win. After all, they’d held their ground, despite casualties, and the American advance had stalled. So, we decided to call it a day, and we’ll pick up the campaign again in a few weeks. We’ll be playing the same game, but this time the Americans get some more reinforcements, to help break the German defences. It was a fun little game, and the “pint-sized campaign aspect added a real frissant to play, compared to our usual CoC games. Next time though, we’ll stop ’em! C’mon 29th, Let’s Go!