This was a very lazy game for me. All I had to do was to provide the table and base cloth. Bob Mcleish, the newest member of our little group provided the rest. As you probably know, What a Tanker! isn’t a game for the purist. It’s emphasis on fun and playability rather than accuracy might irk a few of them. Still, for an evening’s entertainment it’s hard to beat. This game was actually a multi-player affair, with two players and four tanks aside. As well as providing all the tanks and scenery, Bob also kindly acted as umpire. 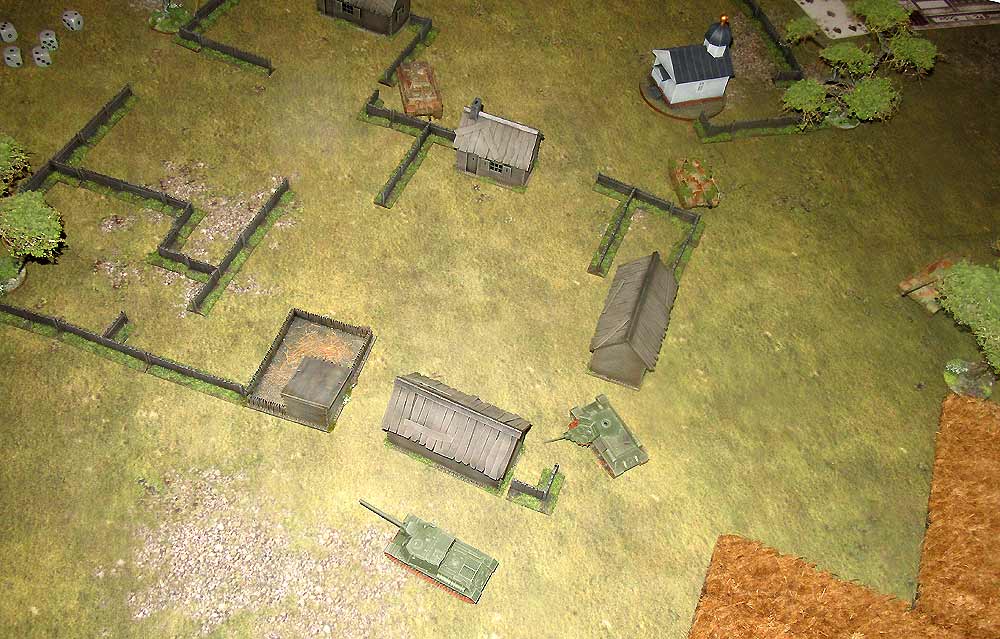 Lindsay and I played the Soviets. We both had a T-34/76, while Lindsay’s second tank was a T-34/85. Mine was a powerful assault gun – an SU-122. Maly and Gyles were the bad guys, with both players having a Panzer IVH,  with more powerful second tanks – a Panther for Maly and a Tiger I for Gyles.

Actually, the model was of a Tiger II, but we counted her as the earlier version. The game was played out on a 6×4 foot table,  dominated by a small Russian village of Prelestnoe in the centre of the table. 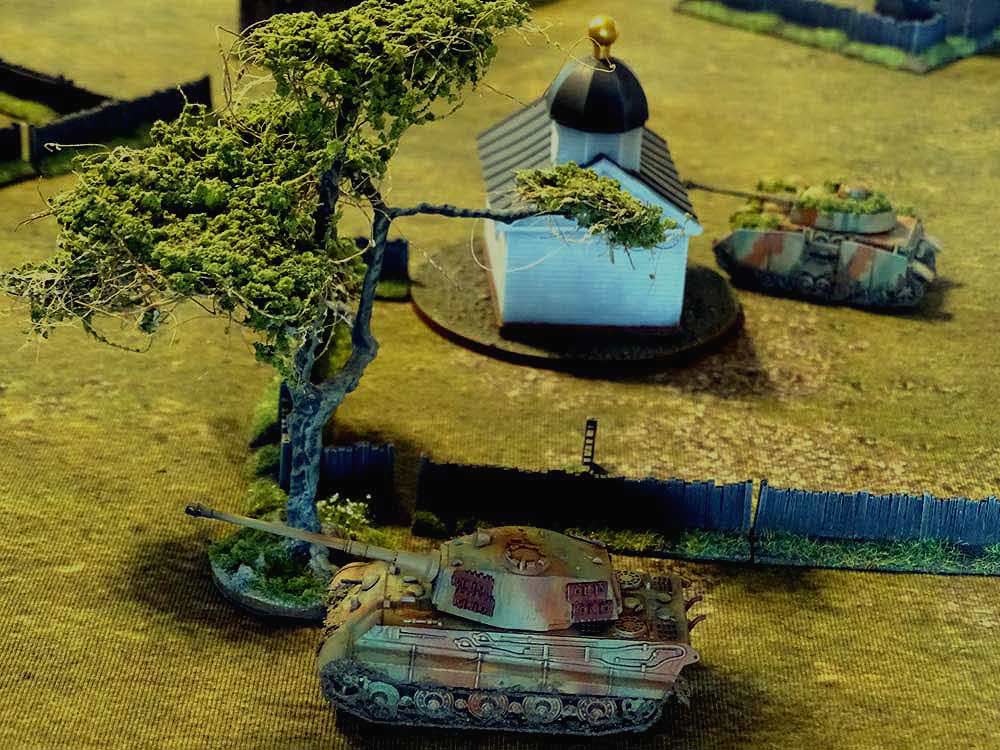 The Soviets began by trundling onto the northern long table edge, while the Germans did the same on the southern edge, with Maly and I facing off each other to the east, and Gyles and Lindsay to the west. The first few turns were all about jockeying for position, as all four of us were cautious about getting caught in the open. Still, I opened the battle with a shot at Maly’s PzIVH with my T-34. 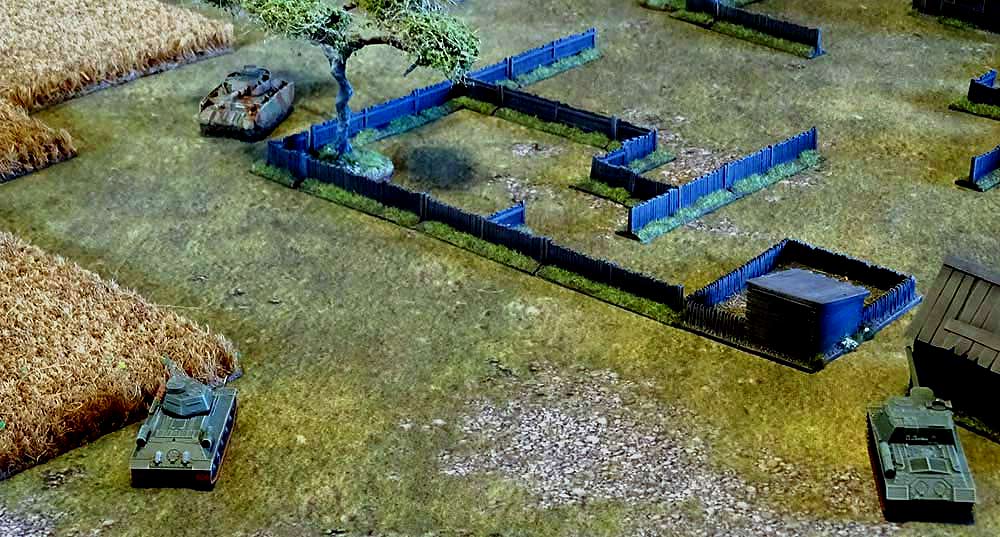 It missed, as did Maly’s return shot, so I scooted back into a cornfield, before trying to work my way round to the left of the enemy tank, as I tried to get a flank shot. Meanwhile my SU-122 just lurked menacingly behind the northern outskirts of the village. 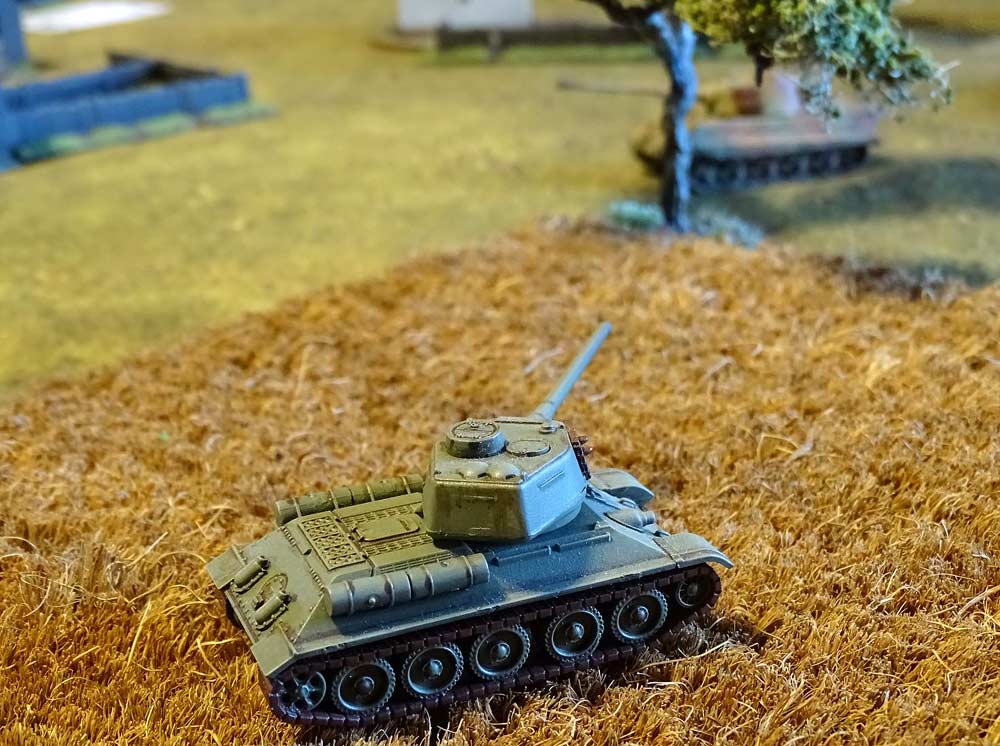 Over on my right Lindsay had now got into action with one of her T-34s. Her T-34/85 started a long-range duel with Gyles’ Tiger, while her other one trundled towards the village. It though, was almost immediately brewed up by a flank shot from the Tiger’s 88mm gun.

Meanwhile Mally’s PzIV had parked itself behind a fence, and was shooting at my T-34. Neither of us achieved much until I came much closer, and got in a flank shot which damaged it slightly. Then my SU-122 got in on the action, and comprehensively destroyed it with a single shot. So, that means both sides had three tanks left. The game though, was still all to play for. 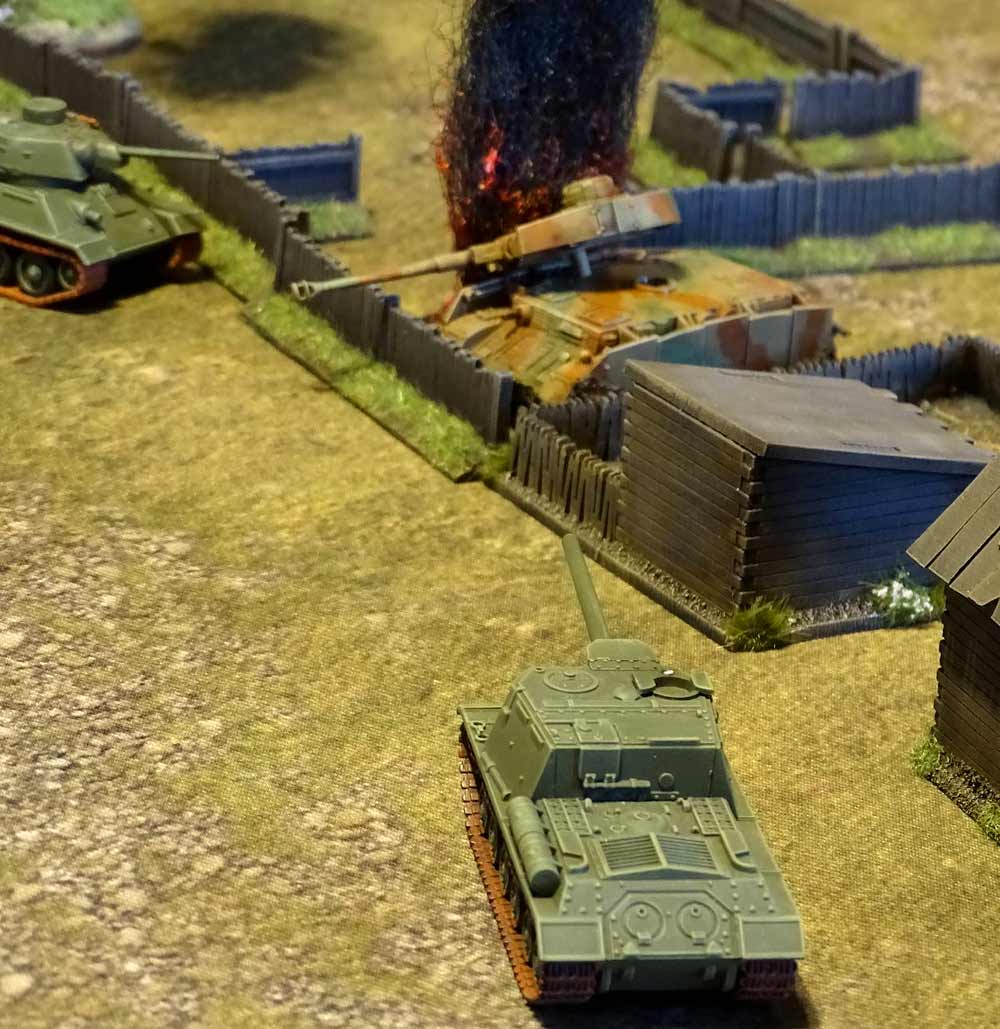 The next casualty was Lindsay’s other T-34, which was hit and destroyed by the Tiger. That meant she was out of the game, and left us with just two tanks – or rather one T-34/76, and a beast of an assault gun. the Germans still had the Tiger, a Panther and a PzIV. I evened up the odds slightly by trundling the SU-122 forward, and scored a lucky flank hit on the PzIV, which was blown to pieces. Meanwhile my T-34 was skirting the fences to the east, trying to work around the flank of the Maly’s Panther.

The Tiger was advancing too, trying to line up a shot on the SU-122. For the moment though, the real threat was the Panther. So, we went stalking. My T-34 began firing flank shots at it, and began causing minor damage. More importantly it meant meant the loss of an activation die. The Panther missed its return fire, and it got hit again, losing a second die. This was important, as it meant that it was now struggling to react o the incoming fire. Meanwhile the SU-122 kept trundling forward, hidden by a building. When the chance came the Panther fired again and missed, while the T-34 scored another hit. The Panther was looking a little vulnerable, so my T-34 moved in for the kill…or at least that’s what I’d planned… 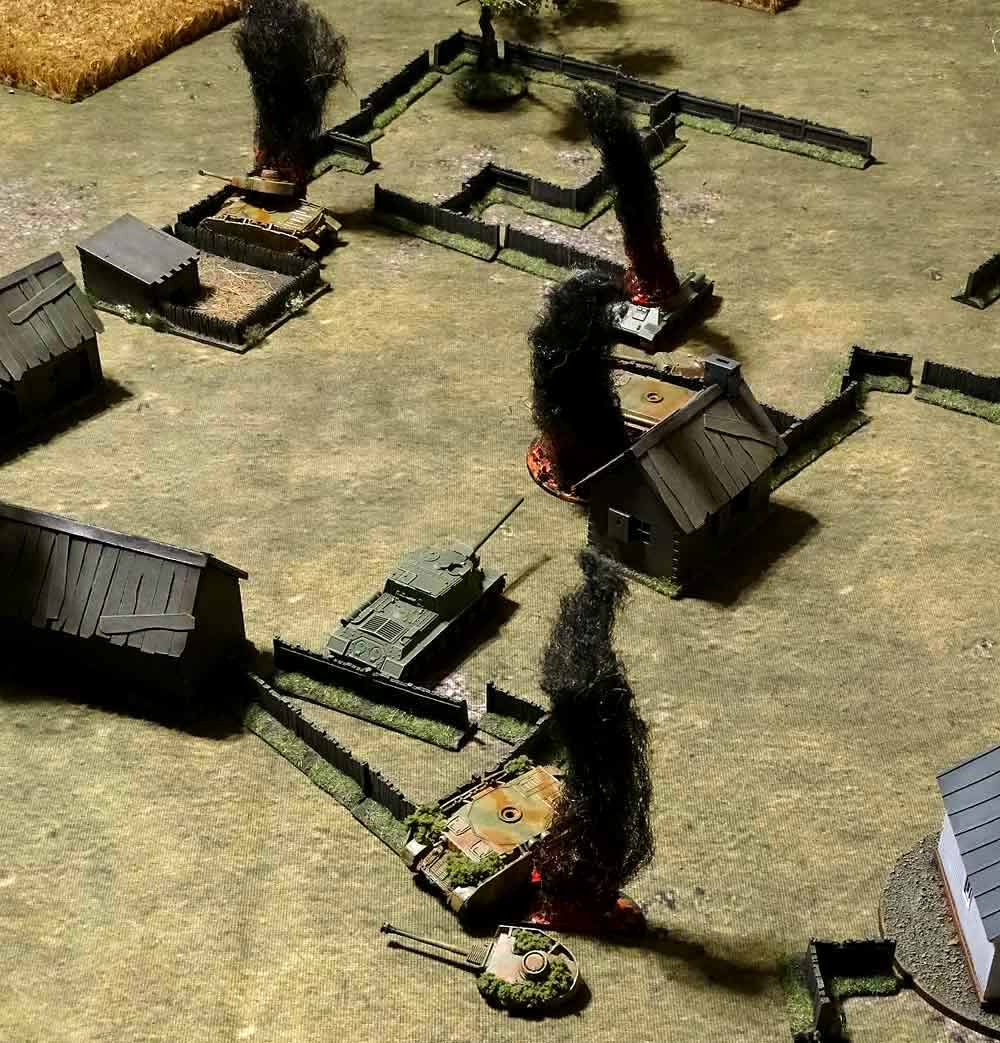 Suddenly though, it was hit by a round from Gyles’ Tiger, and brewed up! I’d completely forgot it was across on the far side of the table! Still, I trundled even closer to the damaged Panther, and demolished it with another 122mm shell from the assault gun. That though meant were now down to one AFV each – the Tiger and the assault gun. 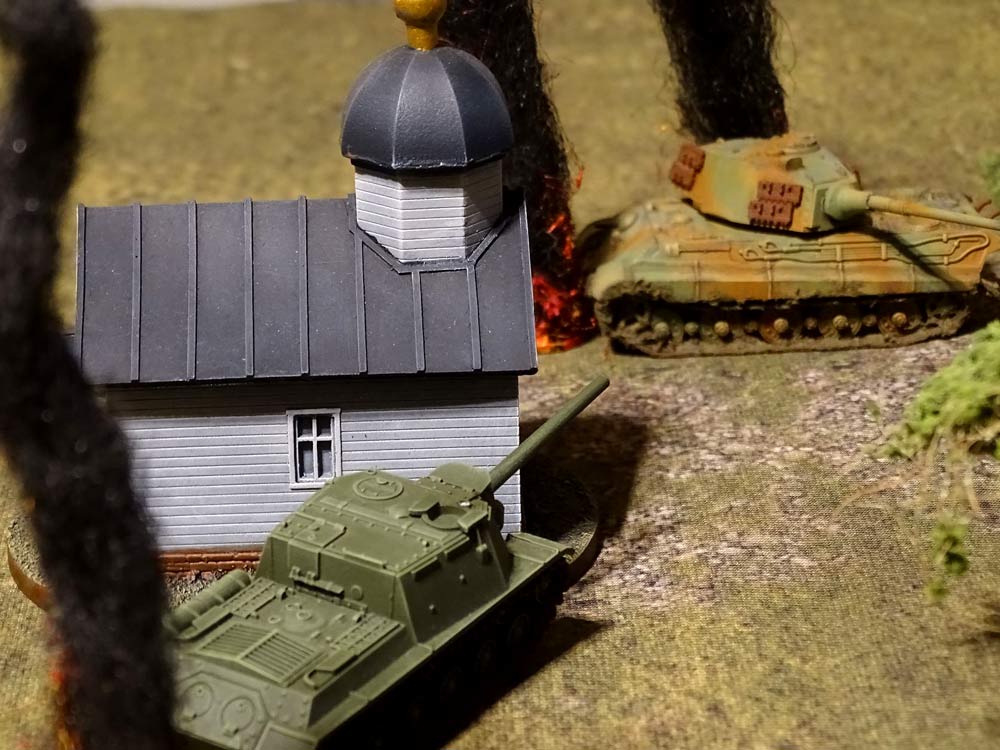 Gyles was hiding it behind a wooden church, so using the building for cover I edged forward. It was now down to luck – who got the first shot in. In the end it was the Soviets, and the SU-122 moved, drew a bead on the Tiger, and fired. It went up in flames, and so that shot ended the game – the Soviet SU was the last man standing! As I said, you can’t take What a Tanker! seriously. We didn’t, and so we had a fun evening of treadhead mayhem! 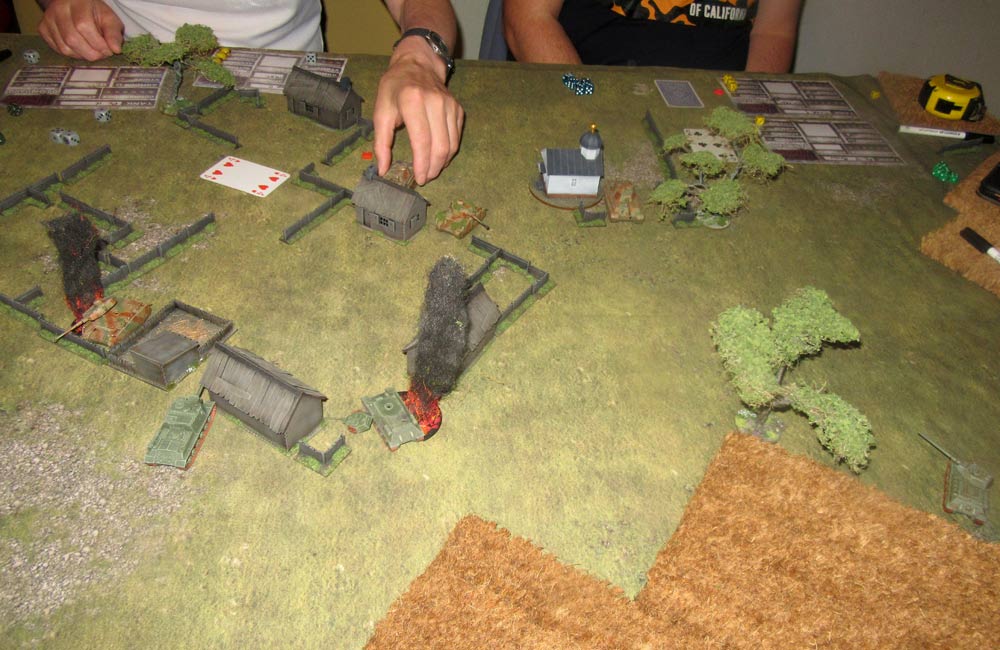