This was our first game back at the wargame club since March 2020! It was nice to be back after so long, even if it meant sharing a hall with a lot of fantasy-playing wierdos. After a year and a half of not playing at all, or else fortnightly games in my kitchen, we were back in a real hall again, and sharing space with the dafties! To celebrate, we laid on a big multi-player Chain of Command game.  Frankly, after so long being  limited to a 6×4 foot table, we wanted to spread our wings a bit. 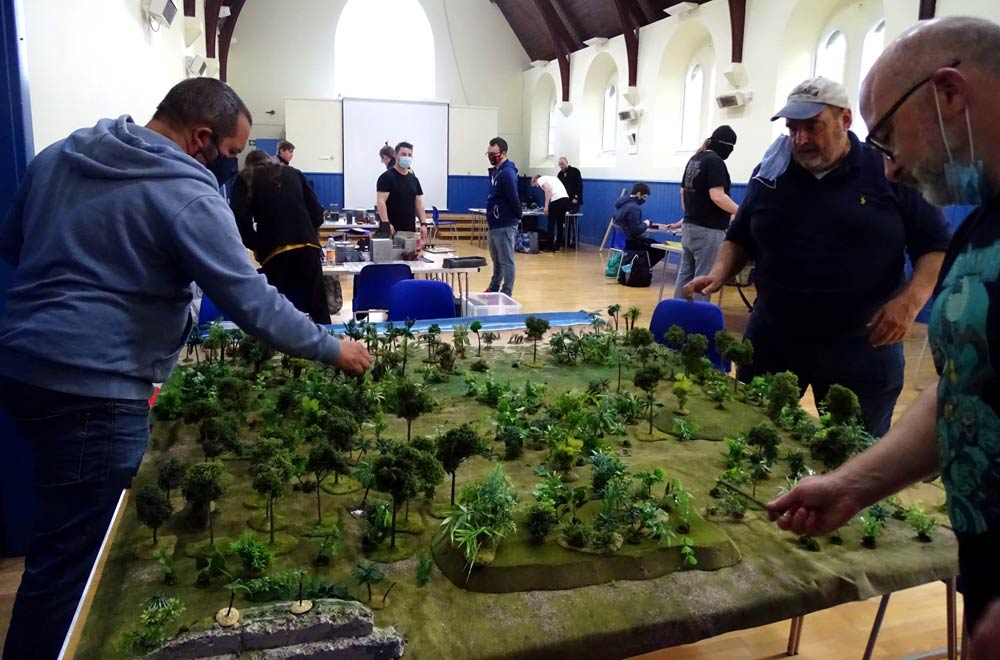 We used the Big CoC system, which allows multi-platoon and multi-player games. We randomly set it in the Bougainville campaign of 1942-43, pitching two platoons of the the 3rd US Marine Division and a platoon of tanks against a similar-sized force of the Japanese 5th Infantry Division. We played the game out on a 6×6 foot table with sea at one end, a low ridge at the other, and a lot of jungle in between. Lindsay and I supplied the figures and the  tanks, while I provided the scenery. 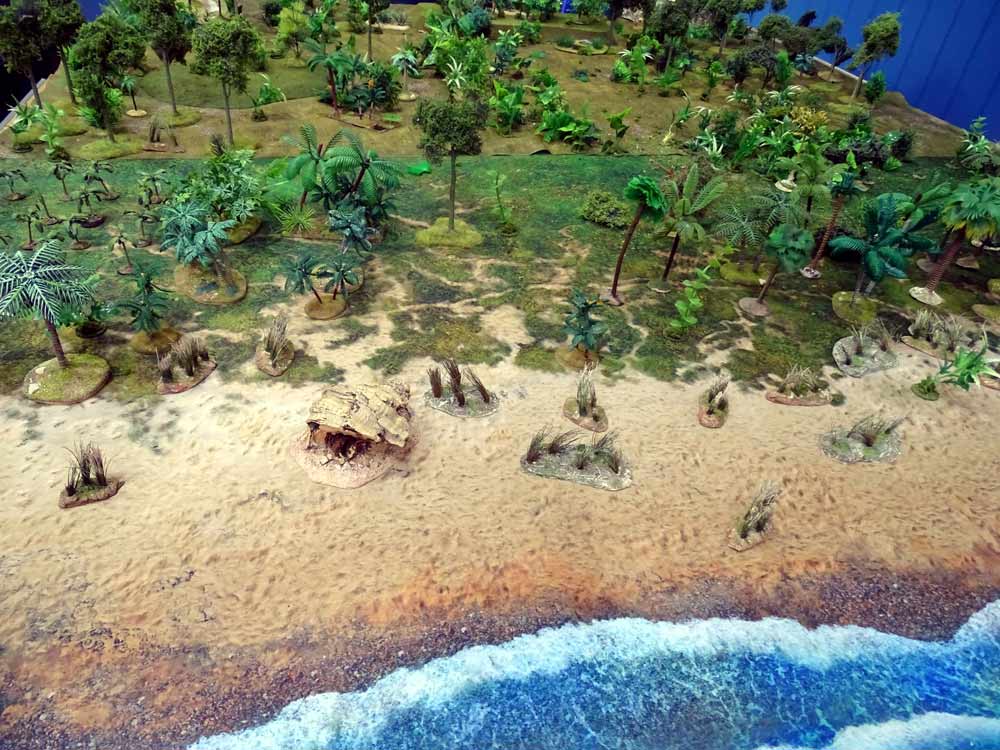 This was a standard “CoC” encounter – Scenario 1 in the rules, and so the only real objective was to defeat the enemy. Lindsay, Sean and Shane played the Japanese, Gyles, Mally and I opted for the Marines, and Bob sort of umpired, and acted as rules guru. The setup saw both sides appearing on opposite table edges, with the sea on one flank and the ridge on the other. 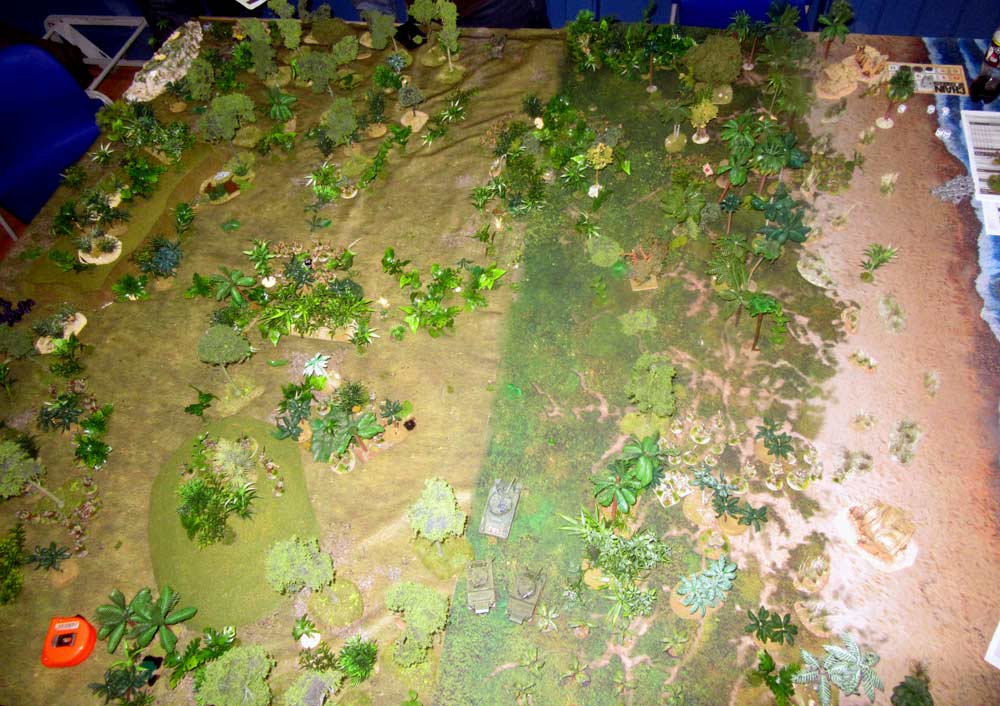 Our first big problem was what to do with our tanks. Fortunately there were paths through the jungle, and clearings, so Mally opted to go across country with his Sherman and two Stuarts. Shane, who commanded the Jap tanks split his platoon – his heavier Chi Ha tanks trundled along the jungle paths, while the two lighter Ha Go tanks opted to advance along the beach. 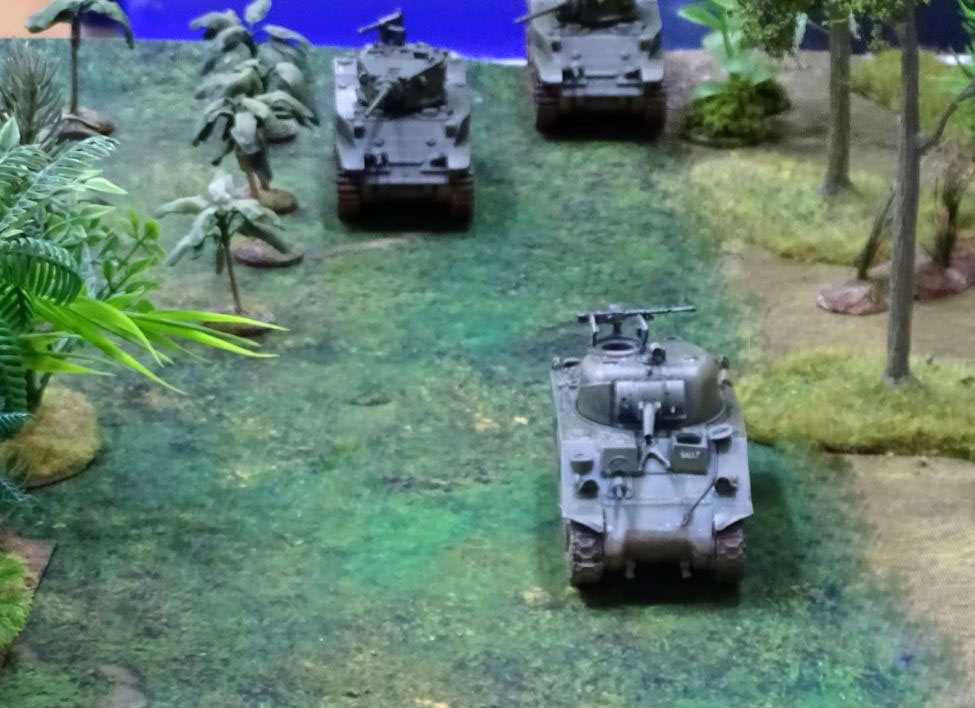 For the Marines, Gyles took the inland platoon (actually using Lindsay’s US in Normandy figures), while I advanced between him and the beach. The Marine’s tanks came on in between us. Right from the start, Mally’s Marine tankers gave me some really great support, shooting albeit from a distance. Essentially he stopped them on one side of a big clearing, and shelled and machine-gunned the jungle on the far side, where some of Lindsay’s Jap infantry were holed up. He spent the game steadily wearing them down. 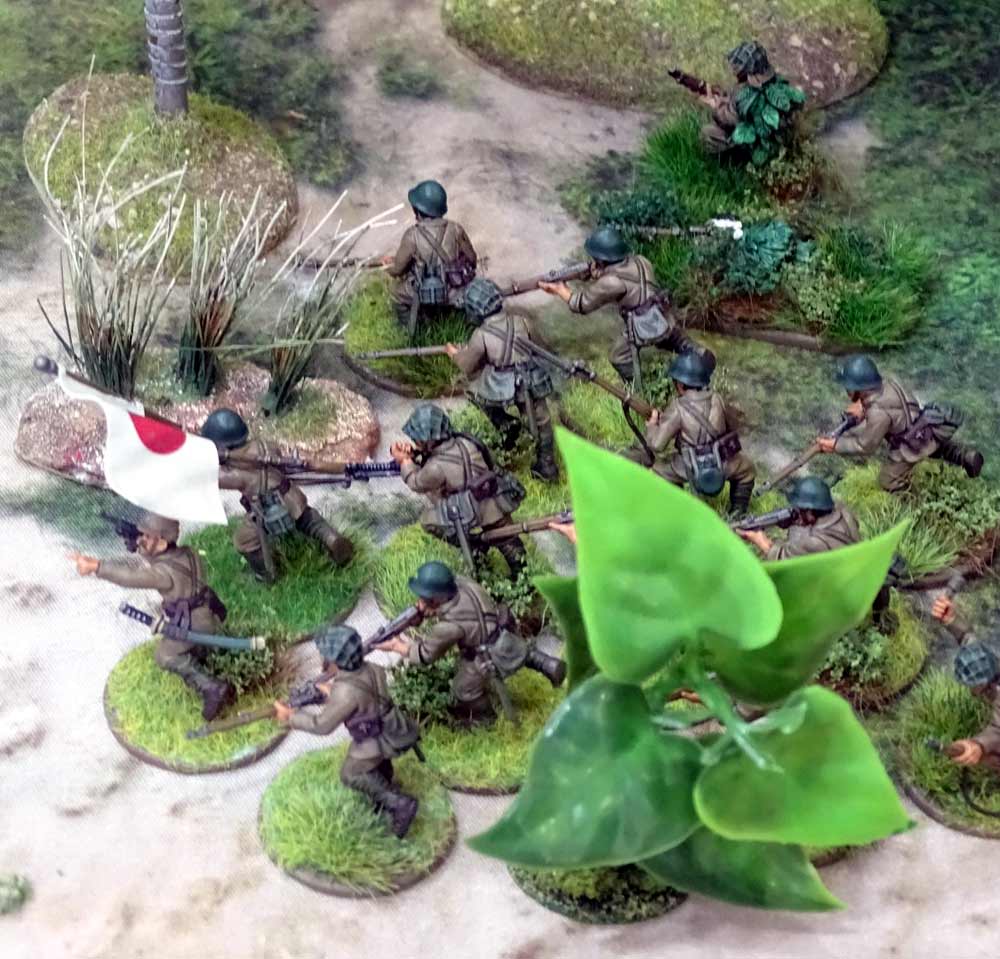 Over on the left, Gyles advanced speedily through the jungle, and managed to work troops up onto the ridge at the back of the table. This was helped by Sean’s lousy Command Dice rolls, where he barely had enough to move. So, for once it was the Japanese who were moving cautiously through the jungle, while the Marines got the chance to work around their flank. 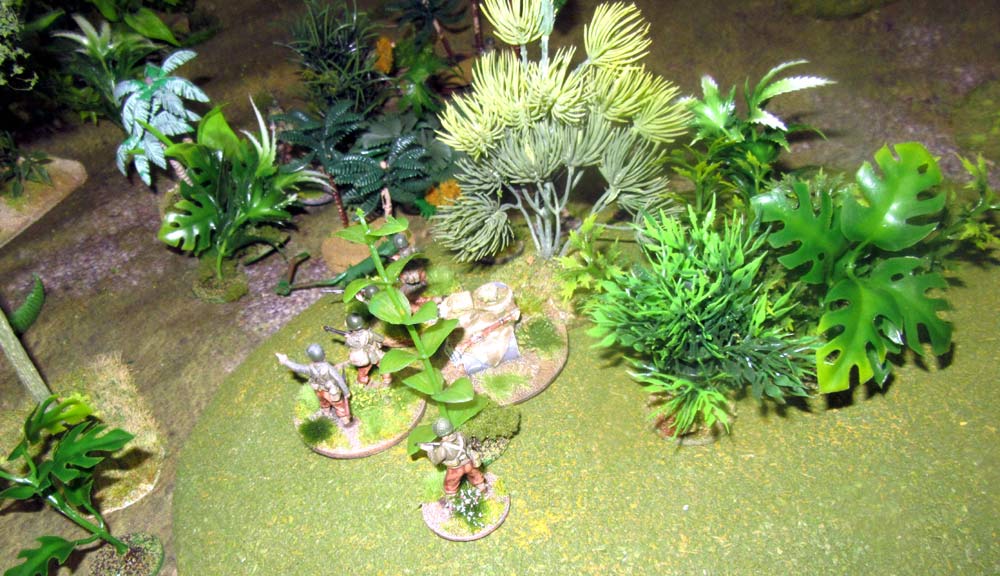 So, Gyles and Sean spent the game shooting at each other from patches of jungle. Nothing really happened on that side of the table – no all-out charges or deeds of derring-do. Instead it was a slogging firefight, with neither side able to gain the upper hand. Closer to the beach though, both sides advanced towards each other, so some form of tabletop violence was pretty much on the cards. 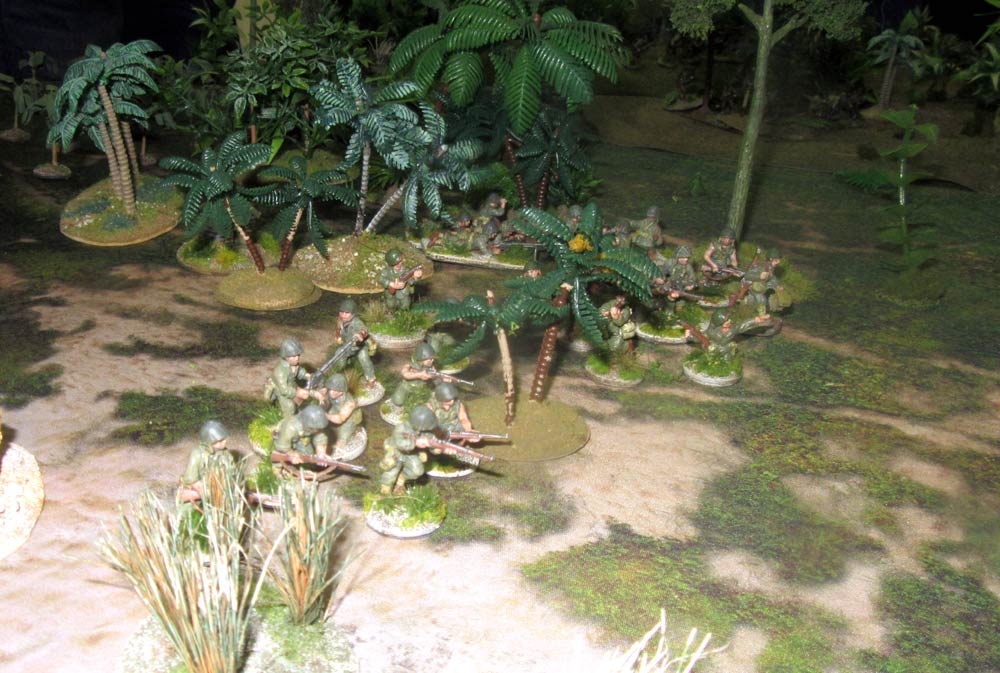 It was then that two cool things happened… cool for the Americans that is. The first was a roll of four 6s, which meant a special event. I rolled the dice and lo – it was a misplaced artillery barrage. I guess the US Navy stepped in there, with some destroyer lobbing shells into the jungle. Where they landed was decided randomly, and fortunately for us it came down right on top of the Japanese tanks, and some of Lindsay’s infantry. The tanks were battered but unbowed, but at least it stopped their advance for a bit. 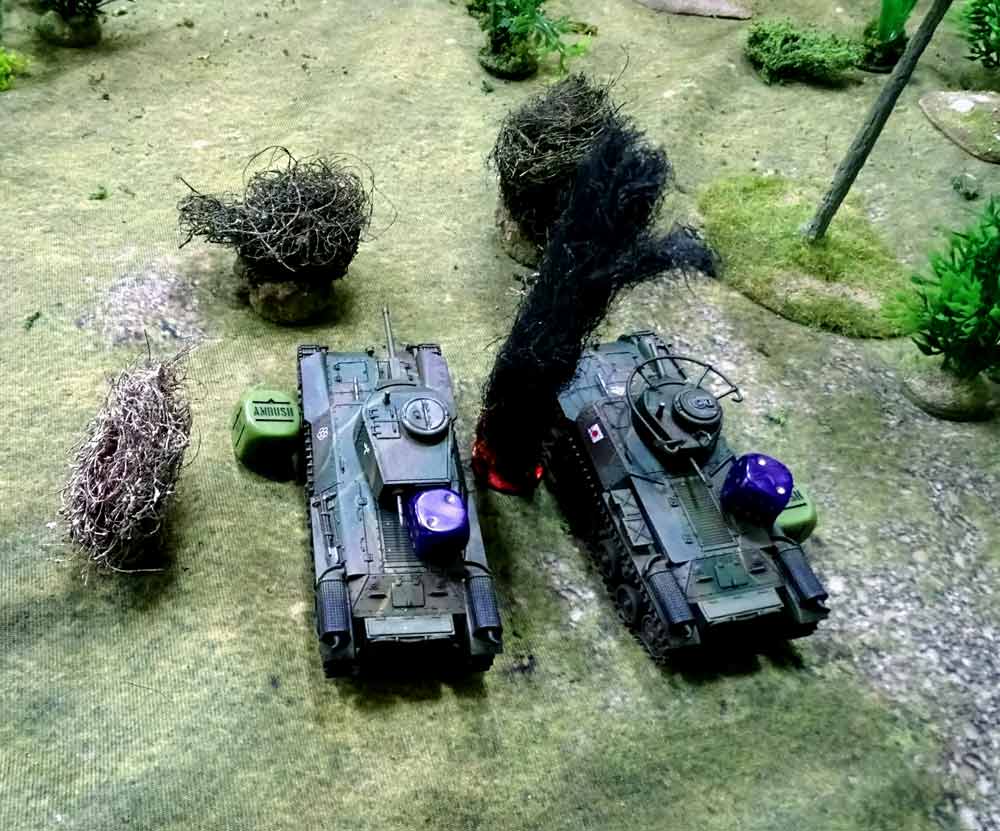 The second cool thing followed on from the appearance of the Japanese light tanks along the beach. This was something of a threat to me, but I’d spent support points on a bazooka team, which was nicely placed to fire at them. It let off a round, which hit one of the Ha Gos. These tanks don’t exactly have a lot of armour, so it was an instant brew-up. Shane though, had his revenge a minute later when the other tank used its gun and machine-gun to wipe out the bazooka team. Still, after that the other tank kept its distance. 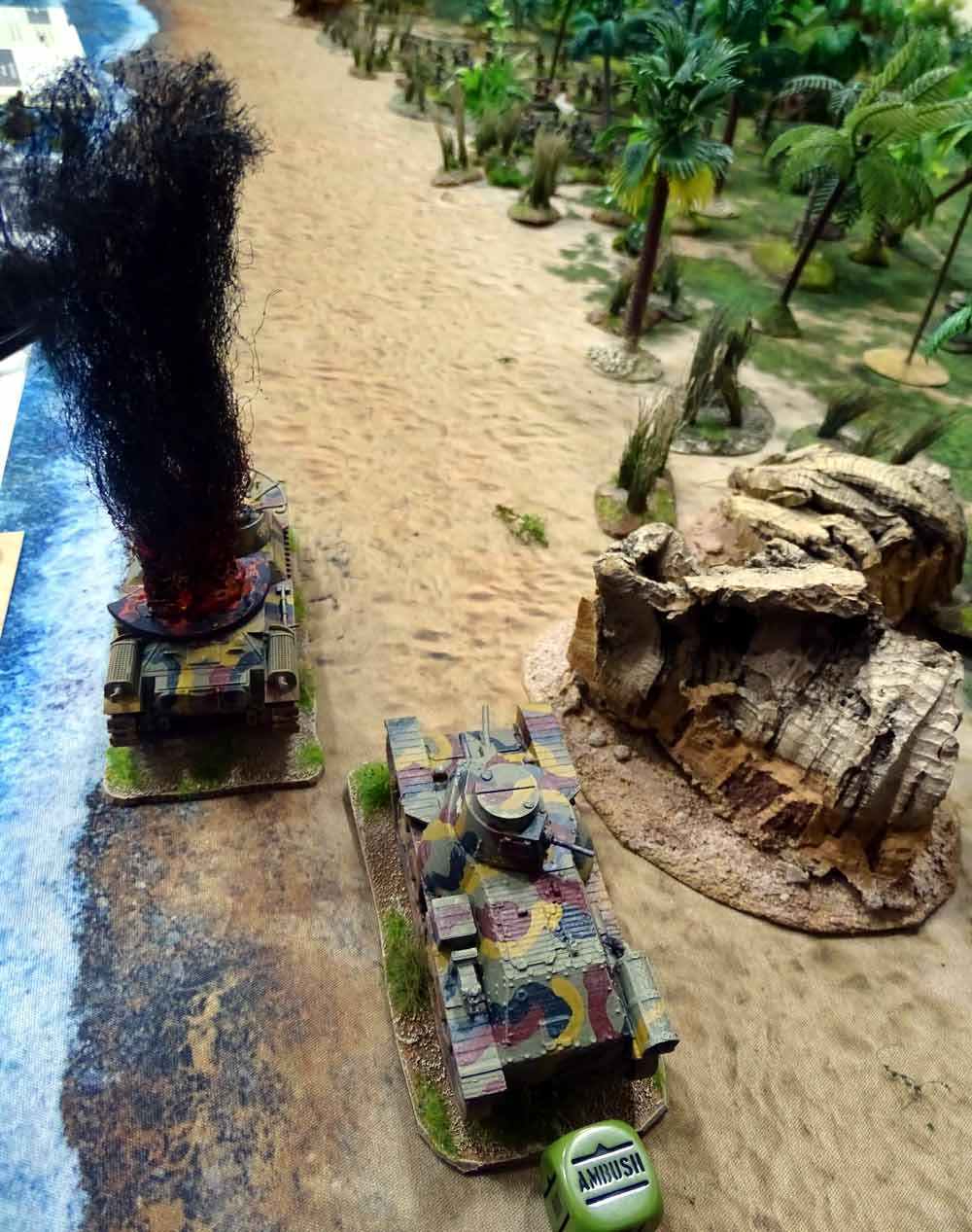 By now though, my Marines and Lindsay’s Japanese were close enough to smell each other. Only a thin strip of jungle lay between them. Now, I’ve played against Lindsay before. She likes charging things. So, I did the sensible thing with my Marines, and put two squads in line, with the BAR squad on their flank and a flamethrower in their midst, and kept my third squad back in reserve. I then hunkered down, put everyone on “overwatch”, and waited. Sure enough, on the very next phase, Lindsay launched a Banzai charge! 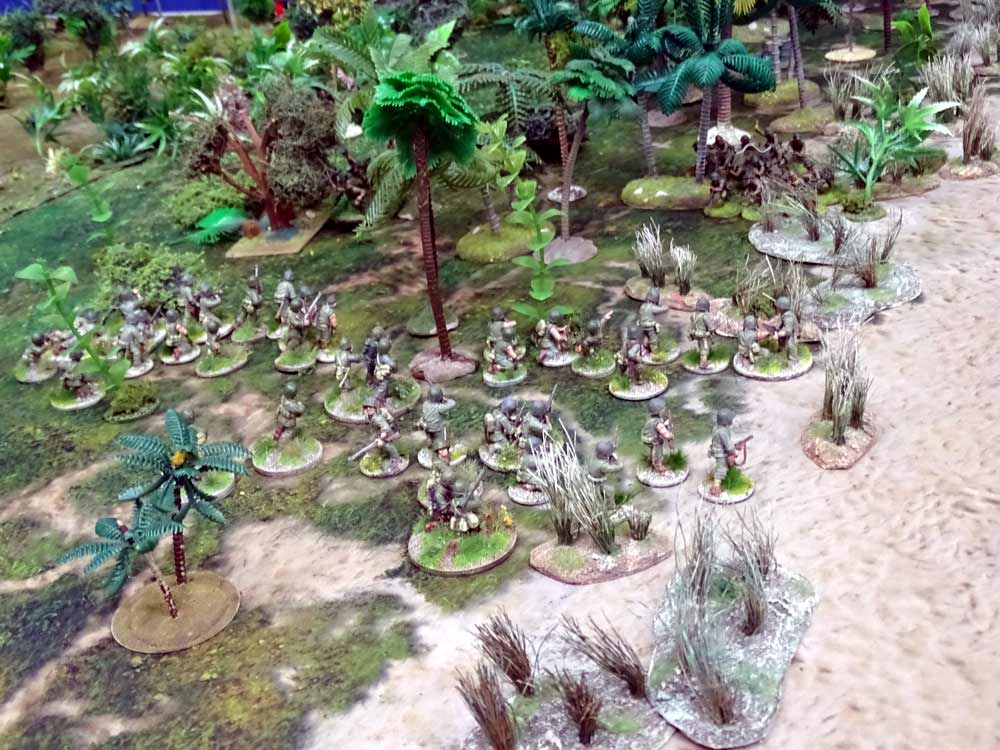 In Chain of Command those are pretty spectacular! Lindsay’s infantry raced forward, and I thanked the gods I’d put my toys on “overwatch”. That meant I got to shoot at them as they came in. On my right, the Marines caused eight casualties, but that was only about half the JApanese squad. In the melee, both sides lost a lot more, leaving me with just two figures! Lindsay though, was wiped out. My much-vaunted flamethrower team by the way, didn’t stop anyone! On my left, Lindsay’s other platoon suffered much worse, losing 11 men before they reached me. In the end they were wiped out too. 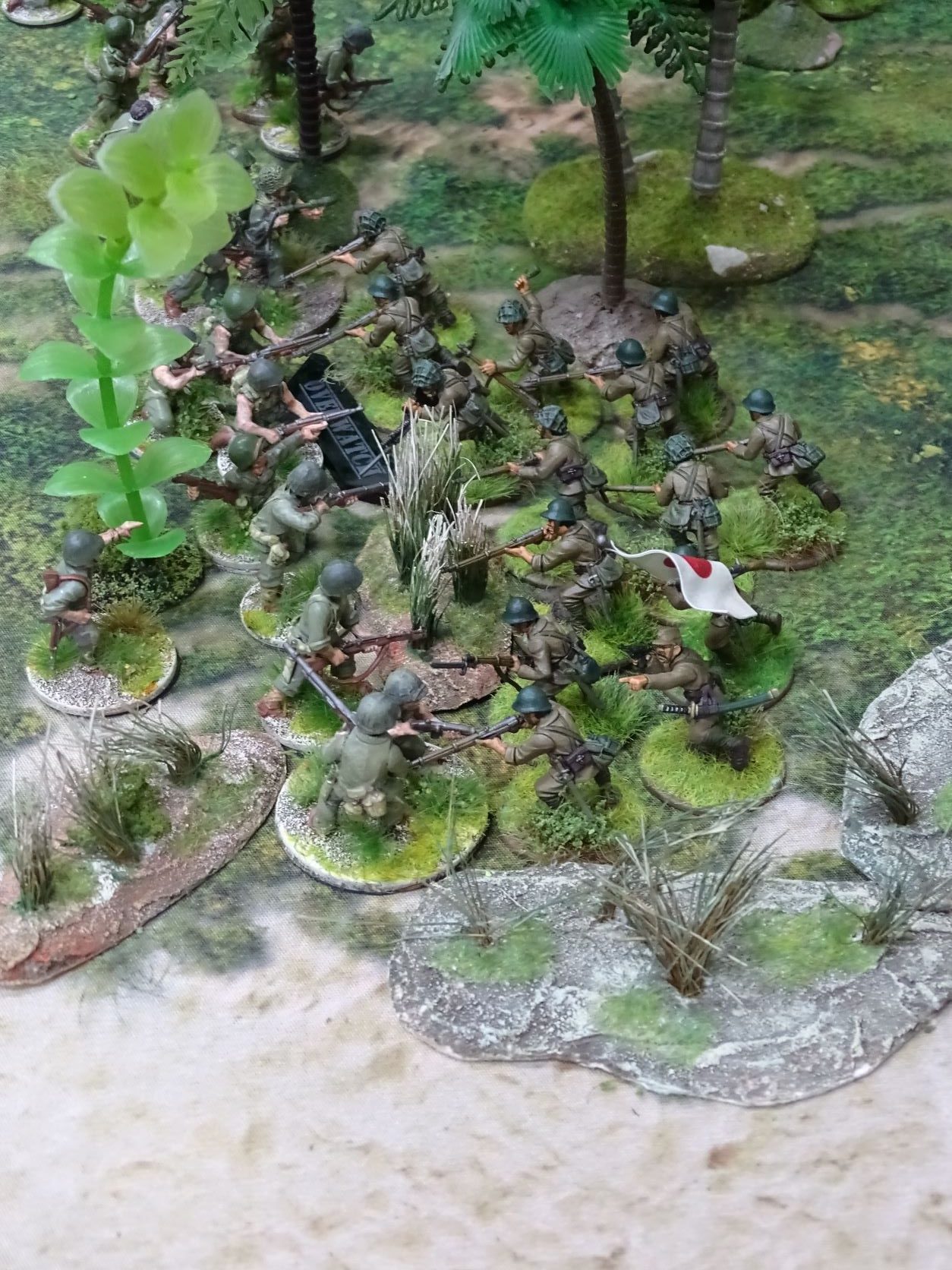 That pretty much ended the game. Lindsay had virtually nobody left, apart from the worn-down squad Mally had been shelling throughout the game. By then it was pretty much time to pack up anyway, and as Gyes and Sean weren’t going to break each other any time soon, we called it a day. The highlight of the evening of course, was Lindsay’s charge, which wiped out about a third of my Marines. They thin red line held though, and so the highly entertaining game was declared a pretty clear-cut win for the US Marines. 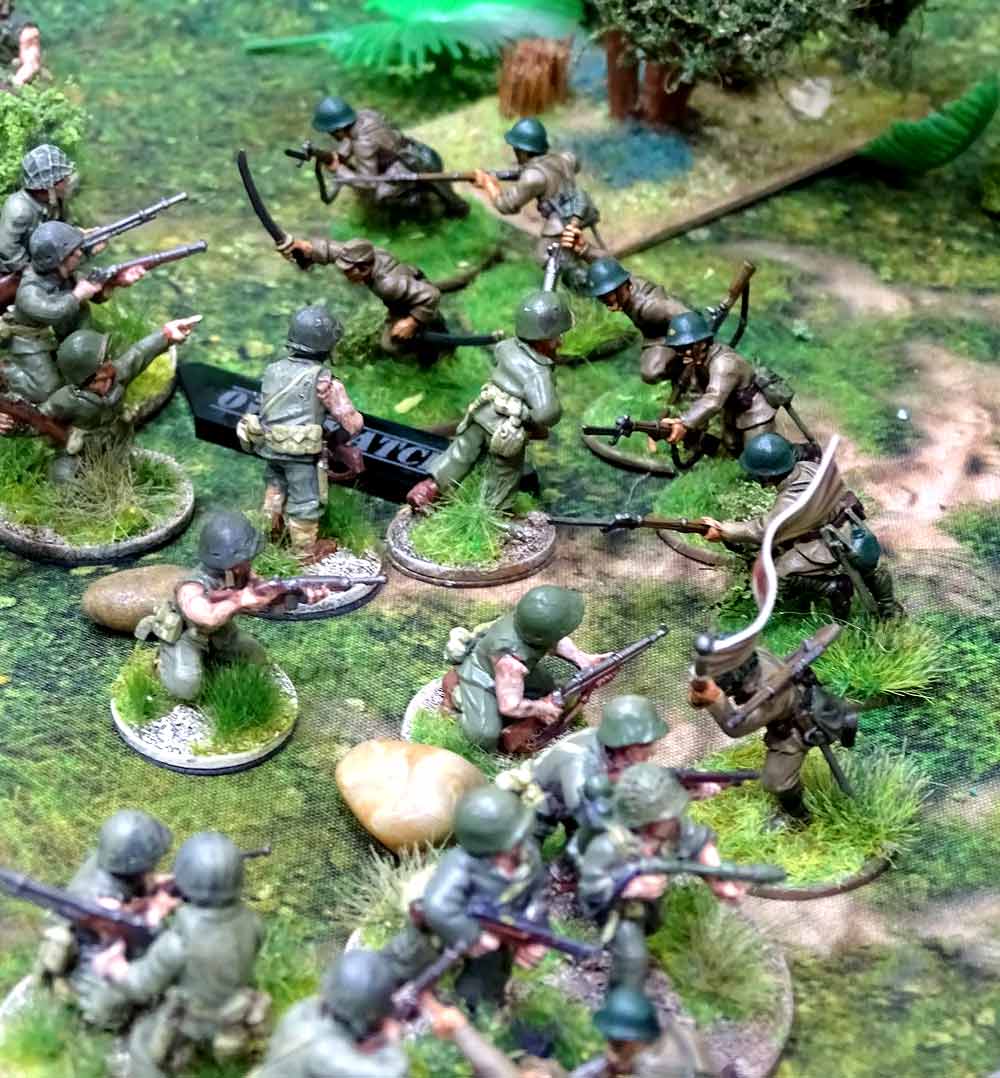