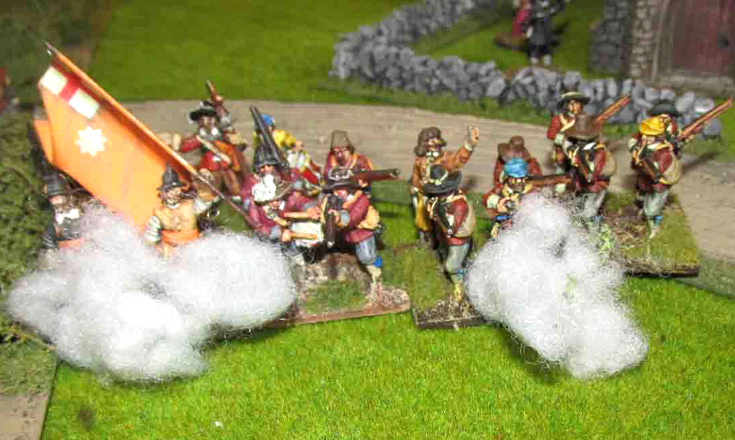 We were in the wilds of Northamptonshire this week, for a small scale battle (or large scale skirmish) set during the Civil War. This is something of a problem, as I only have a Parliamentarian army. We solved this little problem by dividing it in two – those in russet coats remained the good guys, while those in green or blue coats became the evil Royalists for the evening. I simply split my cavalry in two – after all, everyone tended to wear buff coats and lobster pots, or at least that’s what I claimed! So, this little battle – fought along the Nottingham Road outside the village of Newthorpe – was an encounter between two evenly matched forces, each with two infantry regiments and two cavalry regiments, plus a gun and a unit of dragoons. Sean took charge of the Royalist malignants, Joe commanded the heroes of Parliament, and I tried to remember the rules. Its been a while since I last played with these figures, so it took time to remember how everything worked.

The battlefield was dominated by some hedged enclosures. A wide stream divided a Royalist earthwork, a gun and a dismounted dragoon garrison from the rest of the table, while a convenient little hill with a windmill on it was where the Parliamentarians decided to place their own gun. The two guns began whatever targets they could see, but otherwise they had little influence on the game. The first clash came just outside the enclosures, where the road to the village branched off the main Nottingham  thoroughfare.

Two pike bodies clashed – to little effect – and the push of pike there lasted throughout the game. Beside them two bodies of cavalry also collided with each other. In theory the Royalists were better quality troopers, but they’d suffered casualties from the Parliamentarian dragoons on their way in, and the clash ended in a stand-off.

Actually “stand off” might have been a good name for out little game. While the pikemen clashed on the main road, the majority of both sides’ musketeers lined up on either side of an enclosure, using the hedges as cover. They then blazed away at their opponents, with little discernible effect. The Royalists tried to break the stalemate by throwing their second cavalry regiment into the cavalry fight next to the main road, but this move was countered by the arrival of a block of Parliamentarian pikemen. In our games, blocks of pikemen or musketeers can act on their own, as long as they stay within 12″ of another component of the regiment. This gives players a little bit of tactical flexibility.

You see, in these games the figure scale is about 1:10. Each regiment of foot has thee components – a block of 16 pikemen, and two sleeves of 16 musketeers apiece. Each of them has a little command base attached, and in Very Civile Actions each of these commanders has a characteristic – which can be good or bad. One Parliamentarian musket commander was a “bookish coward” – just about as bad as it gets, while another on the Royalist side was so inexperienced he gave his men a negative modifier on firing, melee and morale. Fortunately for Sean he was killed fairly early on in the firefight, and was replaced by a better leader, promoted up from the ranks! It all makes for a slightly more interesting game.

Back in the fray the cavalry battle was wearing itself out, as both sides accrued “terror” markers, which rendered their units a little worse off, less keen and less organised than before. The Royalist horse eventually withdrew to regroup, at which point the Parliamentarian dragoons started blazing away at them again, This prompted the Royalist dragoons across the stream to fire at the dragoons, causing casualties and effectively silencing this harassing fire. The Parliamentarian commander still had an unengaged regiment of horse, and it rode right around the village, only to find itself confronted by a block of blue coated pikemen, supported by musketeers. The two sides stood off for the rest of the game, with both commanders thinking the odds in that corner of the field were against them.

That pretty much ended any manoeuvre. We spent a few more turns with the pikes pushing, the muskets firing, and the cavalry regrouping, but it soon became clear that both sides had cancelled each other out. Neither side wanted to cross the big open enclosure and take on the enemy behind the hedges on its far side, so what could have been a battle of manoeuvre became one where both sides were rooted to the spot, for fear of what might happened if they broke cover. In the end we declared the game to be a draw, and packed the toys away again. Next time we’ll have the two sides clashing on an open stretch of moorland – with no nice secure enclosures to hide behind. That way we may get some real action!