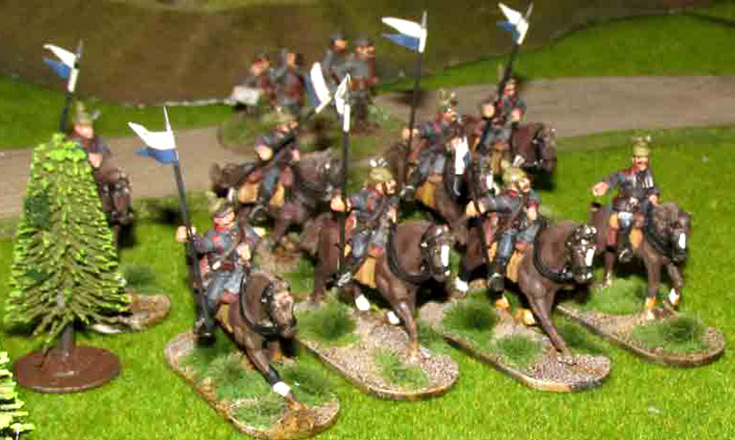 I usually post the little maps for scenarios lifted from books, but I forgot to scan it before I jumped in the plane south. Anyway, this one is called “Encirclement”, and comes fromScenarios for all Ages, by Messrs. Grant and Asquith. In this scenario the Russians were pursuing a smaller German force, only to find themselves surrounded by three groups of enemy troops. The aim of the game was for them to break out of the encirclement with as many troops as possible. In this game the Russians had 5 x 10 infantry, 1 x 8 cavalry, two Maxim machine guns and a field gun, and were led by a Colonel and a Lt. Colonel. On the German side Force 1 (far right above) had 3 x 10 infantry, 1 x 8 cavalry, plus a Maxim and a field gun, led by a Colonel. Force 2 (bottom right) had 3 x 10 infantry, a Maxim and a field gun, while Force 3 (far left) had 3 x 10 infantry (one of them being jaegers), plus a machine gun. these two smaller German forces were each led by a Lt. Colonel.

So, the Russians were outnumbered by almost two to one, but had more troops than any of the three blocking forces. After some debate the two Russian players (Alan and Gyles) decided to head off the left-hand table edge, trying to outpace the two German forces on the opposite ends of the table. That made sense, but German Force 3 wasn’t going to let them get past them without a fight. Could they slow the Russians down enough to let the other German forces catch up, or would they be overwhelmed by the Russian steamroller?

Things began really well for the Russians. they unhitched their field gun, set up their Maxim, and began blasting away at Force 1, which had just crested the top of the hill in front of them. One German infantry unit was wiped out to a man by concentrated machine gun fire, so I tried to deploy my own machine gun. It was duly wiped out by the same Russian maxim gun, and then when my field gun unlimbered on the crest it was hit and destroyed by another lucky Russian shot. After this debacle I made sure the rest of my troops kept out of this deadly space, and they skirted the hill, heading for a farm halfway across the tabletop. Over on my left Joe’s Germans in Force 2 were advancing as fast as they could, and eventually reached a line between the small hill in front of them and the two farms to their left and right. That was when the Russians decided to up the ante, and launch their Cossacks.

Both sides only had one unit of cavalry in this game, which sort of made them a one-shot weapon. The First World War wasn’t renowned for its cavalry actions, but this didn’t deter Alan in the slightest. His Cossacks had been heading off the table, but they suddenly doubled back and galloped for the hill. The Germans were taken by surprise, and hurriedly tried to deploy their machine gun and field piece before they were ridden down. in the end though, Alan’s charge stopped about two inches short, and so what would happen next was all down to the play of the cards. You see, in these rules each unit has a card, and is activated when the card is turned over. In this case it was the German infantry of Force 2 who went first. They fired a volley, and emptied half of the Russian saddles. Before the Cossacks could react the next German infantry unit opened fire, and the gallant Cossacks were wiped out. So much for romantic cavalry charges.

Over on the southern table edge the Russians had got to grips with Force 3. While the unit of German jaegers circled around the small wood to the left, everyone else headed to the other side of it, closer to the table edge. In the photo above the bulk of the Germans are hidden by the trees, but you get the idea. The Russians charged into the woods with an infantry unit, and a vicious melee developed which lasted the best part of two game turns. Meanwhile the Russian unit (let’s call them companies) skirting the other side of the woods came across the waiting line of jaegers, who promptly mowed them down. The Germans were still outnumbered on that part of the table, but they were also holding their own. Still, the Russians still had three unengaged infantry companies, supported by a Maxim. The Russian players decided to head straight for the table edge. To show them where to go their Colonel led the way, and was off the table before the Germans could react. The rest of his force wouldn’t be so lucky…

After that everything began to collapse for the Russians. They’d already limbered up their gun and began dragging off their second Maxim gun  – the ones that had peppered Force 1 – but  the German ring was closing, and it was now touch and go whether they’d make it off the table. By now Force 3’s own Maxim gun was in action, cutting down the Russian infantry like a scythe. The Russians actually won the melee in the wood, wiping out the German company they were fighting, but by now the Russian company was down to just three men. By then the German ulhans had ridden down the road, and emerged from behind the trees. the three guys were skewered by lances, and the ulhans rode on to surround the Russian second-in-command. By then the Russian field gun had made it off the table, thanks to a very lucky movement roll, along with a handful of infantry and a machine gun. Soon there were no Russians left on the tabletop, apart from one Maxim gun and poor Lt. Colonel Lubov.

Amazingly Lubov held his own against the lancers for two rounds of combat. The Russian maxim wasn’t so fortunate – it was taken out by the Maxim gun of German force 2, which had deployed on the small hill. In the end we decided to let Lubov live, albeit as a prisoner-of-war. The scenario guide suggested that the encircled force could claim a victory if it made it off the table with 60% of its original force. That would be about 42 figures. In the end the Colonel, the maxim gun, the field gun and the half company of riflemen amounted to just a dozen men. So, the game ended in an emphatic win for the pickelhaube-wearing heroes of the Imperial German army. The rules worked fine. They’re fairly intuitive, and there were only a couple of patches where we had to look things up. However, they’re every bit as deadly as the Chris Peers’ set they’re based on – particularly so for the hapless Russians!