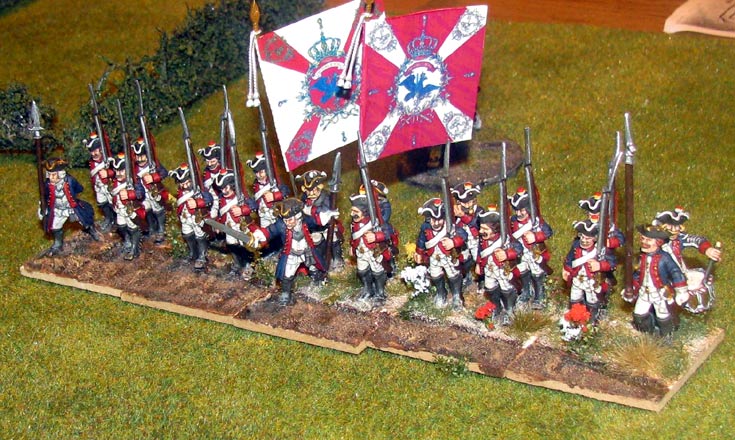 There’s been something of a temporary diaspora in the Edinburgh club lately. Angus (that’s me) is currently up in Orkney, trying to sell a house, while Dougie is over in the Wild West of Scotland, working in Helensburgh. Kevan Gunn has also headed west, while other regulars have been attending the club intermittently, due to other commitments. So, we grab our games where and when we can at the moment.

Therefore, this game report is brought to you by Dougie, and was played over in Dumbarton, once the hope of some world-class shipyards, and now something of a post-industrial ghost town. He’s hoping to woo the local “wargamers” away from their staple diet of fantasy games by laying on nice-looking historical battles. The battle was fought using Dougie’s Prussians and my Russians, using Black Powder rules. Black Powder is simple enough to allow the mechanics to be picked up quickly by “newbies”, but it has enough flavour to ensure a good historical game. For added amusement value I haven’t changed too much of Dougie’s grammar and spelling…

This was a fictitious engagement, played at the Dumbarton Wargames Club between Mother Russia’s finest [played by Dougie] and the forces of Prussia’s King Frederick [played by a historical gaming “newbie”]. The two forces consisted of an infantry brigade, a cavalry brigade and a couple of guns. There was no perticular objective as the emphasis was on learning the rules, which were Black Powder.

The two sides lined up with the Prussians adopting a classic deployment, infantry centre with the cavalry and light troops on the flanks. The Russians placed all their cavalry on one flank while massing their infantry just off centre, with artillery in between. The game started with a madcap cavalry charge by the Prussian Cuirassier regiment. The Russian horse responded with a counter charge. In the ensuing melee they beat their Prussian counter parts and persued after them. The Prussians managed to rally somewhat and forced a draw. The resulting bounce backs left the Prussians off table and the Russian horse collecting their wits.

The Russian infantry commander, not too interested in what the donkey wallopers were up, to began pressing forward. Being an inexperienced player our Prussian commander launched his hussars in an up the gut charge. Racing forward in their fancy blue uniforms it all looked so irresistible. Well it wasn’t. One well delivered volley and the shattered hussars fled to safety.

A rather worried-looking Prussian commander started looking around for troops to slow the Russian juggernaut down. He pulled an infantry battalion out of line to try and back up the floundering Hussars. The juggernaut was not to be stopped – the battalion lasted two rounds of fire before breaking. The Russians rolled on, sliding one battalion off the flank to protect the move. A charge by the Russian horse and it would all be over.

The cavalry commander was obviously waiting for a better opportunity or something, as he was not inclined to move. Things looked even bleaker for the [Prussian] battalion, then one of the supporting battalions rushed up to cover its flank from said [Russian] cavalry, which broke and fled under artillery fire. The Russians closed in bringing overwhelming fire power to bear. It all looked up for the Prussians. This [last Prussian] battalion was made of sterner stuff than her sisters and refused to break dishing out a bit in return.The Russian flank battalion was now taking a pasting from artillery, and the hussars were hovering to charge in again. With his cavalry commander seemingly stuck in mud the Russian commander was beginning to wonder if it was all going wrong.

The [Russian] infantry command final lost patience with the cavalry and charge in with his two lead battalions. The dice were rolled and that doughty Prussian battalion held much to the consternation of our Russian commander. After a second round of fighting finally the Prussians were pushed back.This time lapse had been disastrous for the Russians. The battalion facing the gun had broken and fled while those hussars had rallied up and swept round the back and caught another battalion and wiped them out.  While the Prussian commander generously coincided [sp] the field to the Russians, our Russian commander was now not so sure.
Note from Angus: What is interesting about this game is that the newcomer to historical wargaming did fairly well, and only lost “on points” having turned things around in the last few turns. This game was followed by another where several fantasy gamers each took a brigade, and the battle was refought with Dougie acting as the umpire. The “newbies” all enjoyed the experience, and begged for more. With luck Dougie will be able to lure them away from “the dark side”…