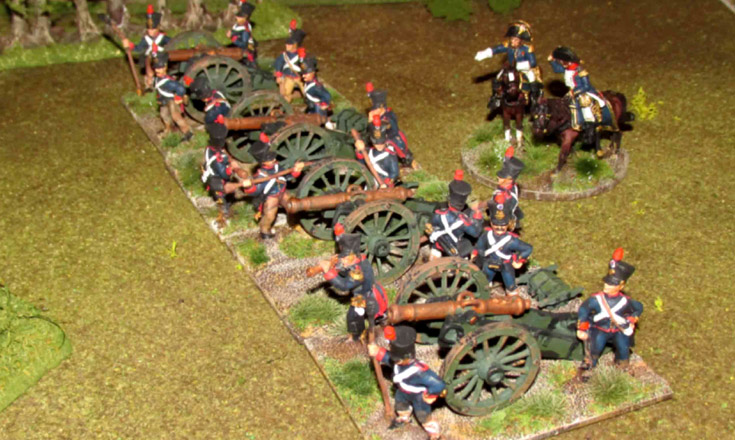 This little game was played up in Orkney using the little 7×5 foot table in my attic wargaming den. Three of us took part – Mark Colston commanding the French, while Alan Bruce and I took charge of the Prussians and Russians respectively. It was a little encounter clash, with about six battalions a side, plus a brigade of light horse and a battery of guns. There wasn’t much finesse in this game – the French attacked, and the Allies struggled to hold their positions. The French formed up into two large three battalion columns (that’s 90 figures each, not counting the detached skirmishers), and these were thrown forward into the assault, supported by the French guns and cavalry. Three Prussian battalions waited for them to the left side of a farm complex (as viewed below), while my three Russian battalions entered the table from a road curving off the table to the right. In between lay a Russian hussar regiment, supported by some indifferent Cossacks.

Mark is quite an aggressive player, and his troops were almost on top of the Prussians before they had time to deploy. In fact the French skirmishers reached the edge of a little hill before the Prussian guns could deploy, so Alan sensibly pulled them back before they were overrun. However, the Prussian fusiliers shook out into a line at the last moment, while a battalion of musketeers in column screened the withdrawal of the guns on the hill. The French rolled forward, and when they charged the fusiliers it looked like they#d sweep the Prussians from the field. Amazingly, one of the three French battalions faltered and refused to charge home. Then, when the other two hit the enemy the Prussian line held, thanks to some excellent die rolling. The French were forced to retire, but they were still in the game – bloodied but unbowed.

In the centre the rapid advance of the French cavalry gave my Russians pause, and forced their infantry into square. The two regiments of French cavalry were stacked up one behind the other due to the compact space they had to manoeuvre in, and before they charged the Russian hussars they were pestered by Prussian musketry from jaegers, artillery and musketeers on their left flank. The lancers charged home though, and were duly counter charged by the Mariopol hussars. Eagle-eyed wargamers will probably notice that the French lancers looked a little unusual – in fact they were Russian ones (my Polish regiment), masquerading as their counterparts in French service for the evening.

Anyway, once again Mark rolled appalling dice, and I rolled high. The lancers were routed. Not to be outdone, Mark promptly charged the hussars with his second unit – the 19th Chasseurs a Cheval. This was their first tabletop outing – and of course they performed poorly. Despite catching the Russians halted and reforming the chasseurs got the worst of the clash, and were forced to retire.

The French cavalry had suffered heavy casualties, but they soon rallied, and were held in reserve, ready to support the infantry if the chance arose. That though, wasn’t to be. The second French infantry attack rolled forward, but by then the waiting Russian infantry had deployed from square into column, and were ready for them. This time the whole French formation went in, but failed to make any headway against the Russians, despite three French battalions being ranged against two Russian ones. The third Russian battalion was still moving up in support, but by now they were supported by a whole cavalry brigade. Even more importantly the Prussians had managed to deploy a half battery of two gun models, and were causing trouble from the flank again.

The French battery spent the game whittling down a Prussian musketeer battalion deployed in front of the farmhouse, but the German’s morale held. At that point we had to end the game. The French had definitely come off worst in the clash, but if the game had gone on they would have launched another couple of assaults. By then though the odds had lengthened thanks to the redeployment of the Prussian guns and the victory of the Russian cavalry, so the chances of success were slim. All three of us enjoyed the game. After playing with the more simplistic Black Powder rules I found General de Brigade gave a much more accurate game, but the pace was definitely slower. That of course will change when we get re-acquainted with the rules.