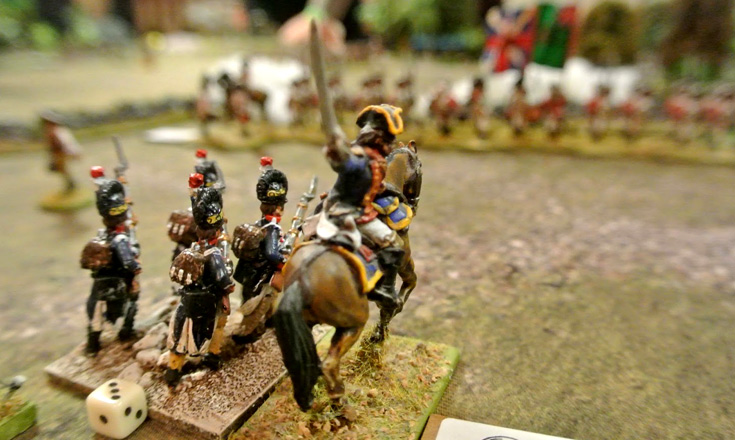 This game came about because I unearthed a small force of French Revolutionary figures I hadn’t used for years. Simultaneously The Two Fat Lardies published an e-book set of campaign rules for Sharp Practice. The result was the battle for Fort Fleur d’Epee, the first game of a mini-campaign set on the West Indies island of Guadeloupe in 1794. In the campaign, as in the real thing, the British landed an invasion force at Goziers on the eastern island of Guadeloupe – Grand Terre. They enjoyed local naval superiority, so the French would have been hard-pressed to stop them. In fact the landing went unopposed. General Dundas then led his troops inland to the island’s main town, Point a Pitre. Guarding its seaward side was Fort Fleur d’Epee, which formed the focal point of out little game.

Actually, it would have if Bill had turned up with his Vauban walls. He got stuck in traffic, failed his morale test and turned back, so we had to make do with a pitifully small stone wall, standing in for 15 foot high ramparts and bastions. The game was fought on a 6×4 foot table. The fort was defended by Lt. Col. Chrsty-Palliere with a small (two group) contingent of the French 108th Demi Brigade, supported by a 4-pounder gun. In nearby Point a Pitre was General Collbet, with three groups from the 106th Demi-Brigade, and two groups of grenadiers, plus three more of voltigeurs – the Chasseurs de la Guadeloupe. Facing them were Col. Symes’ 43rd Foot, in two three group units, supported by two more groups of the regiment’s grenadiers and two more groups of light infantry The British also had a battery of three naval guns, but they were more a scenario requirement than a proper unit.

The aim of the game for the British was to drag the naval 18-pdr. guns onto a hill overlooking both the town and the landward side of the fort. From there they could pound either place into submission. The other way they could win – deemed unlikely – was to storm and capture the fort. To help them the grenadiers carried storming ladders. Incidentally they were led by Prince Edward (fourth son of George III and the future father of Queen Victoria), who talked his way into taking part in the battle. For their part the French had to stop the British guns deploying on the hill, and to hold the fort. The intention was to create a game which brought about a short, sharp battle for the hill.Of course it didn’t pan out that way.

The game began with the British advancing onto the table from its south-east corner, diagonally opposite the town. This represented the track leading back to their beachhead at Gozier. They were spotted from the fort, and the alarm was raised. So, the French in Point a Pitre stood to, and formed up, ready to intercept them. This all took time, particularly as a nasty marshy stream lay between the town and the hill. Meanwhile the line companies of the 43rd deployed in two neat liens in the open ground between the fort and the hill, and slowly began advancing towards the town.

This proved too tempting a target for the gunners in the fort, particularly as the 43rd were within canister range, and presenting their flank to the gunners. They got off two rounds, causing “quadruple shock” on the British, and forcing them to retire a little. At the same time the British light infantry under Lt. Raffles appeared in front of the fort, and began firing up at it. This was answered by a couple of ragged (uncontrolled) volleys from the defenders, which killed three British skirmishers, knocked out Raffles, and sent the rest running back into the trees. So, the fort had repulsed the first attack.

The British were back though., This time it was the turn of Prince Edward and the 43rd’s grenadiers. they raced forward and stuck their ladders against the walls as the  defenders were reloading. A brisk melee followed, but the assault party were out-diced, and hurled back, with three more casualties. So far so good for the French. Fort Fleur’s defenders had repulsed two attacks, and it looked like the British main advance was stalled in the middle of the table. That, of course, was when the whole game was turned on its head.

Strangely, we were actually running out of time. We’d sat around waiting for Bill for ages, and so the game got off to a late start. It was now well after 9pm, and Donald (umpire and co-British commander) wanted to be packed up and away shortly after 10. So, we knew we had only a turn or two left to play. That’s when Michael, the other British co-commander decided to take things into his own hands. Throwing caution to the wind he (playing the part of General Dundas) wheeled half of the 43rd round to the left, presented muskets and blasted the impertinent French gun crew on the ramparts. With it wiped out the British line reloaded, then advanced on the fort. The grenadiers and light infantry were still skulking around licking their wounds, so they were effectively out of the game. So too were the rest of the 43rd, as Col. Symes was still sorting them out after their enforced retreat. So, if anything was going to happen it was up to Thomas Dundas to do it.

Dundas noticed the grenadiers’ ladders were still in place-  the defenders had been to busy to pull them up out of the way. So, he ordered his men to storm the walls of the fort. The defenders were at a disadvantage, as thanks to their previous two actions they carried a few “points of shock”, which made them a little less effective, and their muskets were still unloaded. So, the British swarmed up the ladders, bayonets fixed, and fought their way onto the ramparts. It was all stirring stuff, but despite the best efforts of the garrison commander Christy-Palliere the defenders were chopped up badly, and forced from the walls. Christy-Palliere (that’s him in the picture at the top) regrouped what remained of his men (just one battered group) in the centre of the fort, but it was now clear that Fort Fleur d’Epee had fallen to the British.

As this was happening, and as General Collbet’s French were still advancing from the stream, the British naval guns reached the hill. This was a bit of overkill, as the reason they were sent there – to bombard the rear of the fort – was no longer valid. The fort was captured. While the British infantry had been advancing and retiring, and doing whatever fancy manoeuvers it does, the sailors had doggedly advanced throughout the game, pulling the guns with them. When the hill was in sight they looped round Col. Symes’ ragged firing line, and plodded on. Slow and steady won the race. The arrival of the guns sealed the deal for the British, and the Battle of Fort Fleur was duly declared an emphatic British victory. My French had done well until that final turn, but then victory was torn away. All in all it was a great little game. it was Michael’s first exposure to Sharp Practice, and I think he quite enjoyed the experience. He supplied the British by the way, while I fielded the French.

As for the mini-campaign, this little map shows you how it works. The British landed at Gozier, and advanced to Fort Fleur, where the first battle was fought. They now follow the solid arrow and the next battle is fought at Vieux Habitants, on the far side of the hilly western island – Basse Terre. This will be a slightly different game, as it involves a beach landing, as the Royal Navy transported Dundas’ men around the island, to land behind the French. If the French had won at Fort Fleur the next battle would have been at St. Anne, where the British withdrew to if they lost. If the French won that, then the British would be driven into the sea. Now, at Vieux Inhabitants, a French win will see the British pull back to the far side of the western island, to Petit Bourg. A British win would see a final British advance on the island’s capital of Basse Terre. So, look out for the Battle of Vieux Habitants some time in the coming weeks!