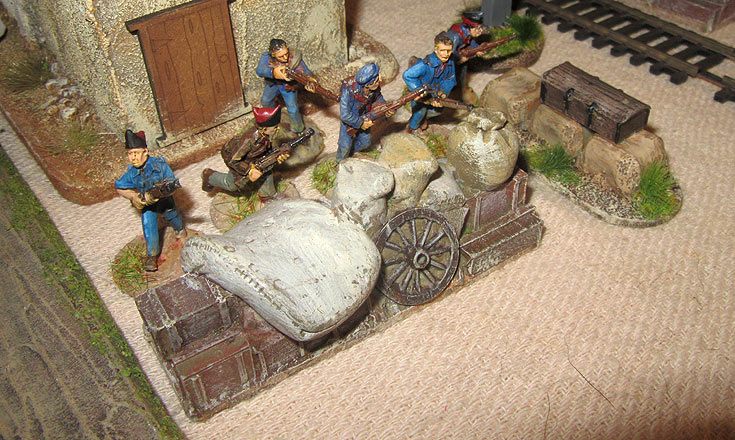 First of all, my apologies for taking so long to post this. I’ve got writing deadlines, and finishing this bloody book is taking up most of my waking hours! Still, the other week we still had time for a game at home with a few of the guys. In this little Spanish Civil War clash Sean 1 and I commanded a platoon of Nationalist regulars, while Gyles and Sean 2 played the Anarchist militia. 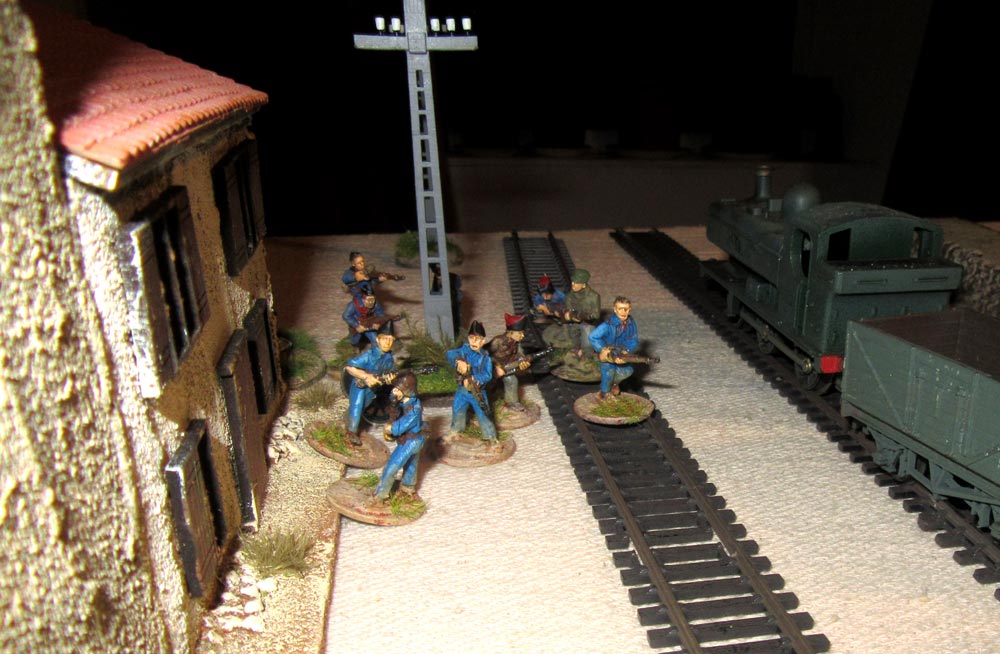 The trouble with the Anarchists is – we discovered – they’re so bad that their “Force Modifier” is enormous. That’s the difference they can make up in support points to bolster their force. So, we got one extra light machine gun, while they became battle-hardened veterans, and gained a whole arsenal of weapons, including a small tank. Still, you can’t take Anarchists too seriously, right? 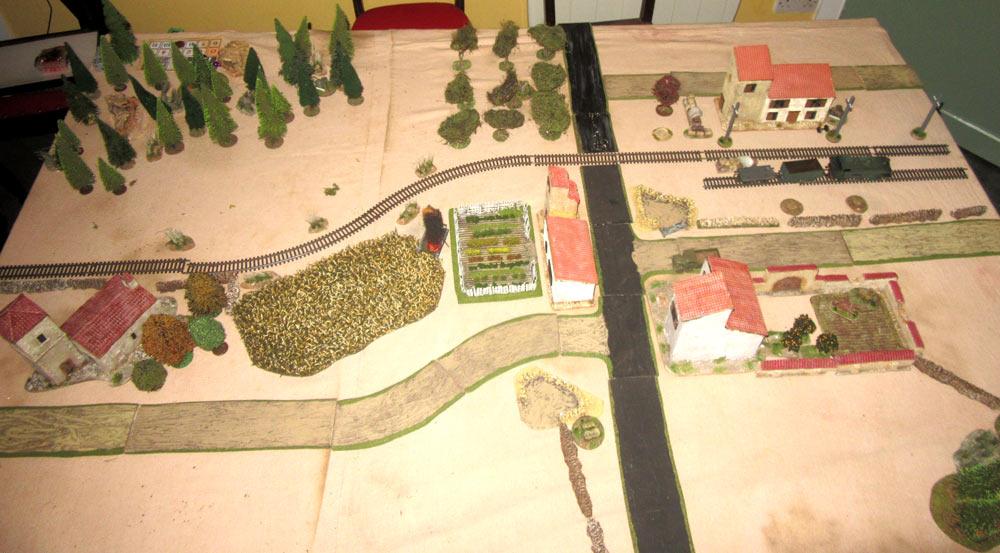 In this game, the fighting took place around a small dead-end rural Spanish village, and its railway station. In the picture above, the Anarchist starting edge was at the bottom, while the Nationalists came on from the top. Oh, Sean 1 supplied the Natioanlsits for this, and Gyles brought his Anarchists, so my own toys weren’t needed. So, Sean 1 and Gyles took command of the patrol phase, which landed up with the Anarchists in the village and the station, and the Nationalists in the church, the woods and the orchard. 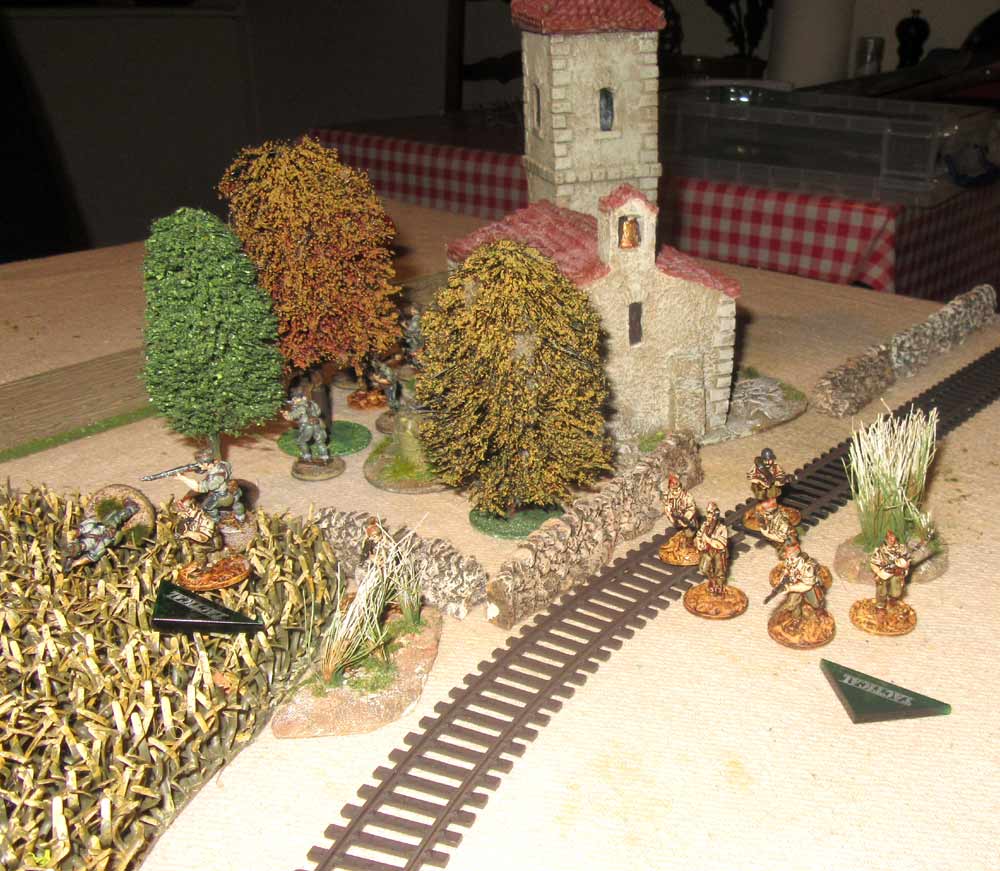 The game began with both sides splitting their forces between the two players. So, we all had a “section” of around 16 people, plus various types of support. Sean started his around the church, then advanced on the village along the railway tracks. For my part I came on in the orchard, while the Anarchists appeared at the rear of the town, and at the back of the railway station. 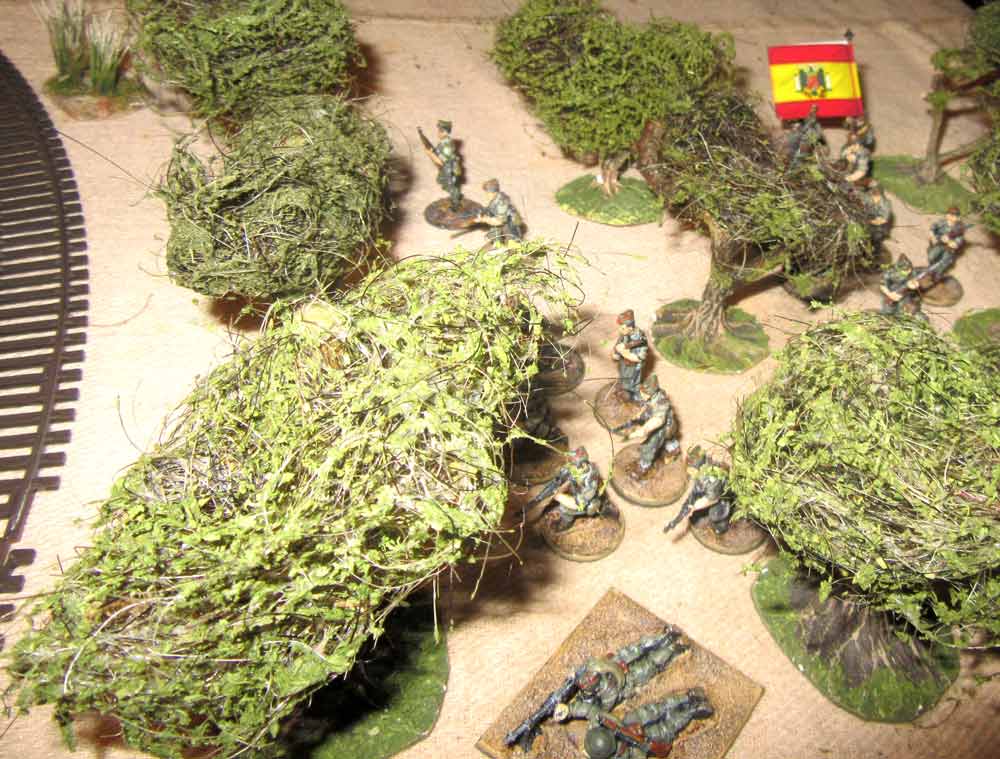 Sean’s Nationalists soon came under a murderous fire from the village, most of which was coming form some damned miliciano armed with a medium-machine gun. She was firing handfuls of dice, and moving down facists like ninepins. For my part, my light machine gun was pretty much doing the same, shooting up the Anarchists who were caught in the open by the railway station. 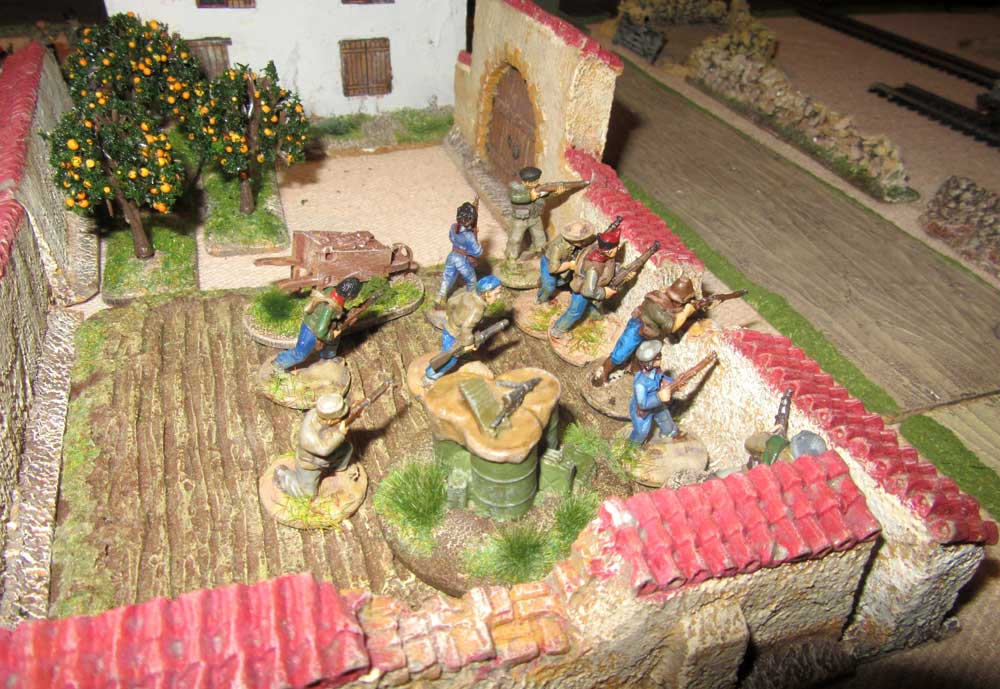 The survivors made a barricade of sorts, but it didn’t stop the rot, and eventually Gyles’ whole section evaporated. With them broken I thought about advancing into the village, and I made it safely across the tracks and into one of the buildings. That though, was my high water mark. That machine gun pinned me down, while more of Sean 2’s militia in a walled courtyard whittled down my troops in the orchard. 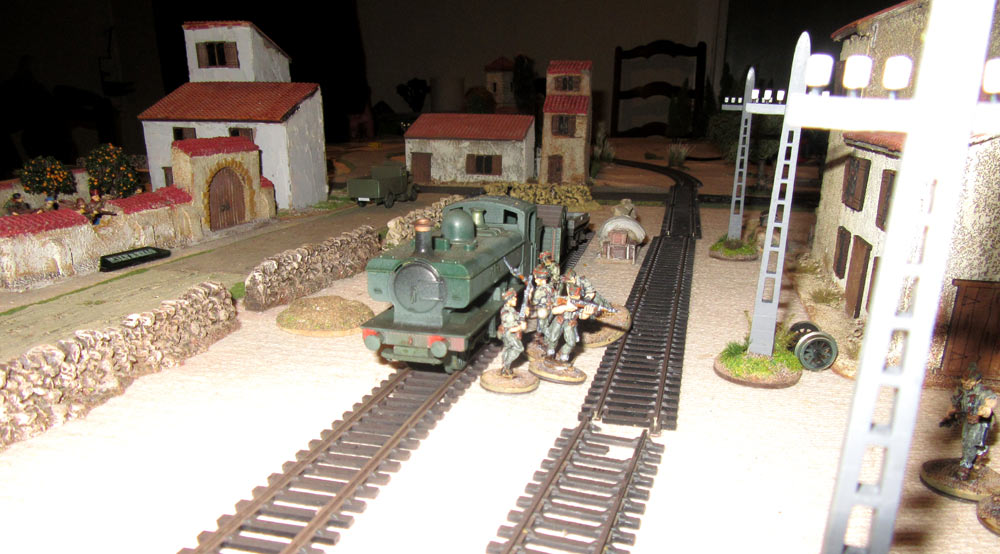 By now Sean 1 had rallied about half of his section, and decided to follow my lead. This lot though, tried a fancy two-pronged advance, one bit over the railway tracks and the other into the village, using my toehold as cover. The first prong became derailed in the railway station, as  fire from the courtyard pinned them down behind a locomotive. After that they never moved from there. 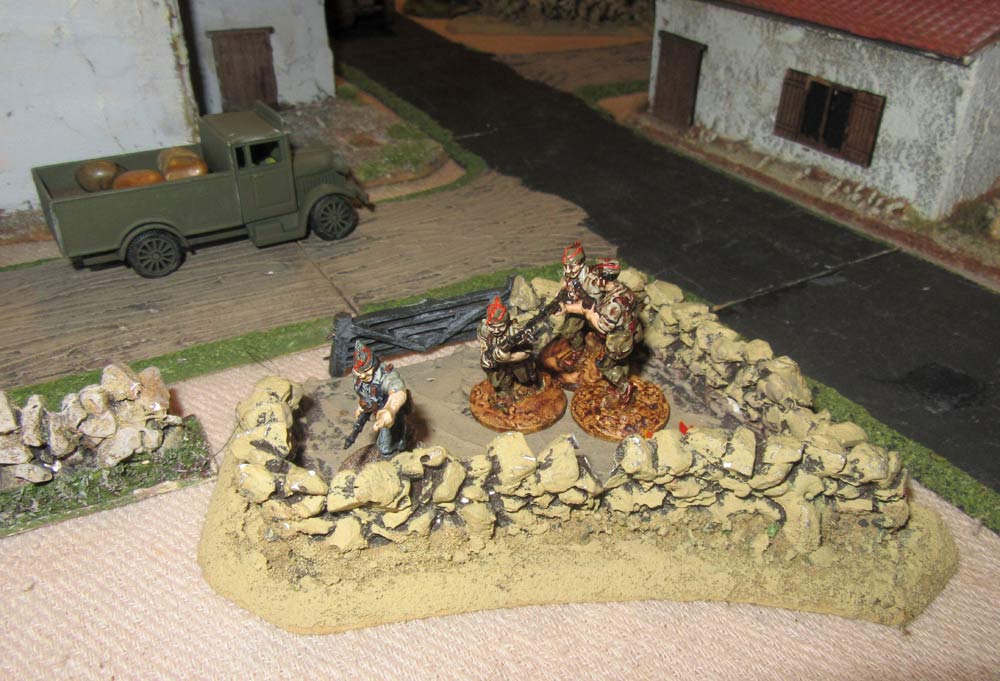 On the right Sean’s guys reached a small sheep pen on the village side of the tracks, but there weren’t many of them, and there were even less after a few phases under that damned machine gun’s murderous fire. Eventually the Nationalist survivors broke and ran. 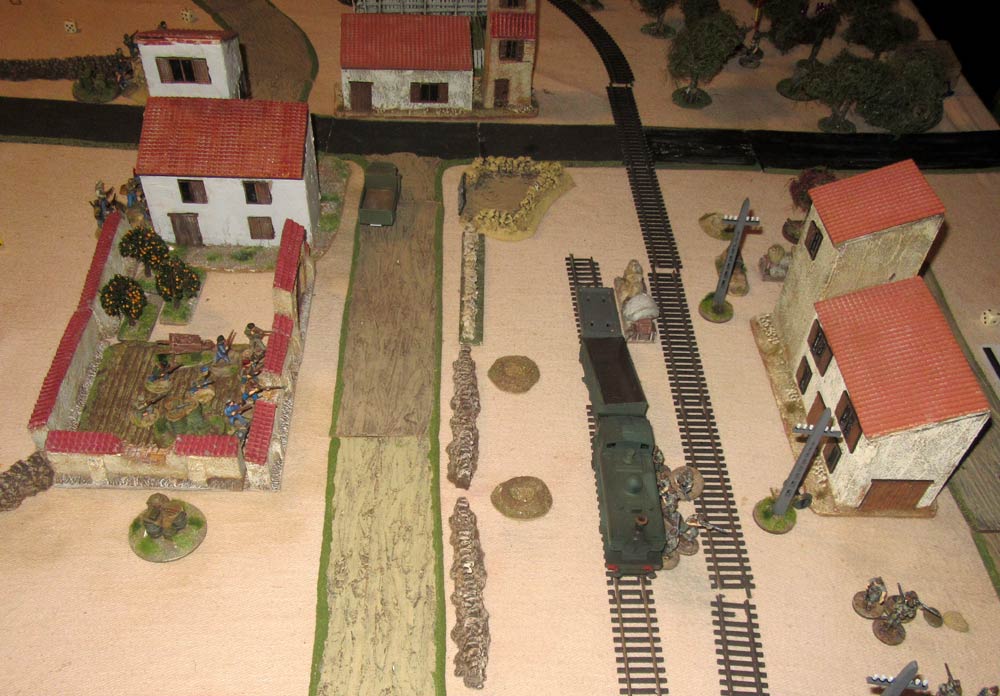 Meanwhile, the Anarchists in the courtyard were busily pinning down the rest of Sean 1’s guys, and the machine gun was whittling down my troops in the village and the orchard. Effectively we couldn’t move, and were getting slaughtered. So, to drive home the point Gyles brought his tank on  – an FT-17 – and trundled it down the road to the church, to capture Sean’s “jump off point”. 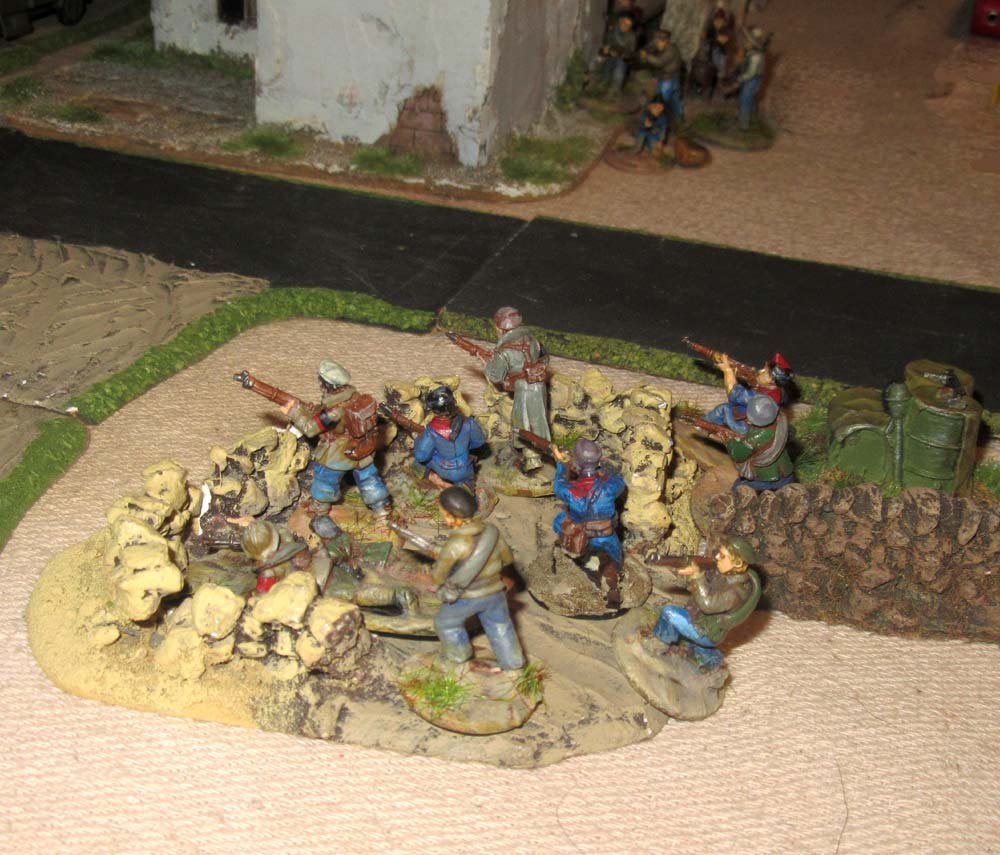 So, we were getting hammered. Gyles’ reserve, in another sheep pen at the back of the village, made sure my Nationalists couldn’t move without being cut down. I could only bug out, screened by a wrecked Nationalist tank, and so at that point we conceded the game. It was a famous Republican victory – made all the sweeter for Gyles because his Anarchists have never  won a game before! I can see that machine-gun toting miliciano making an appearance again – she was an excellent use of support points! 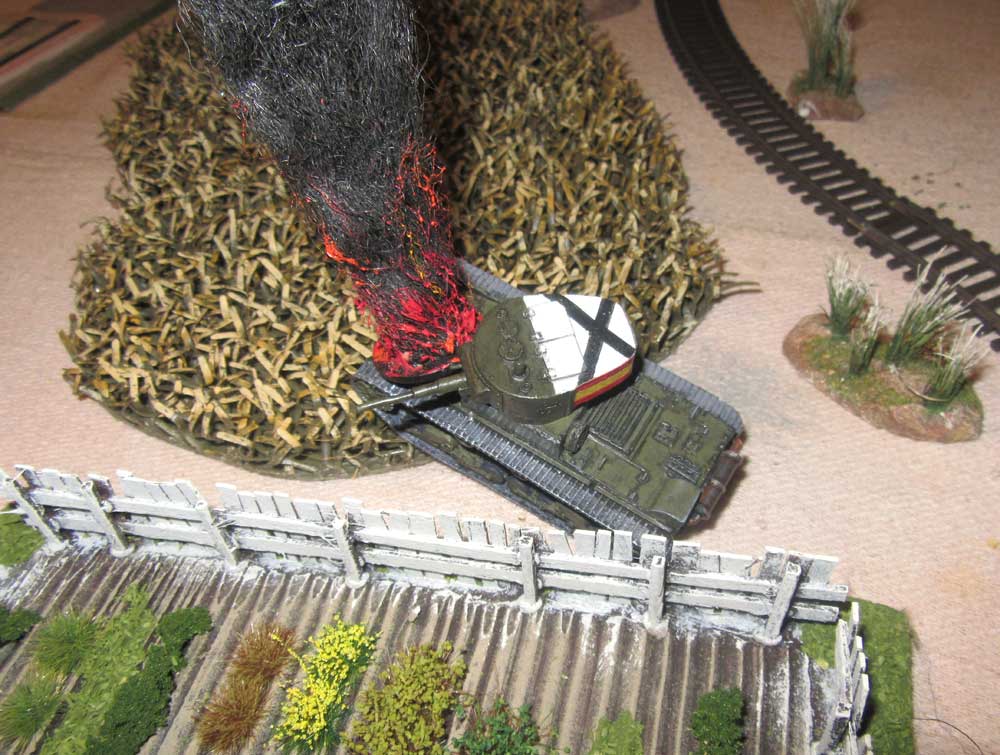