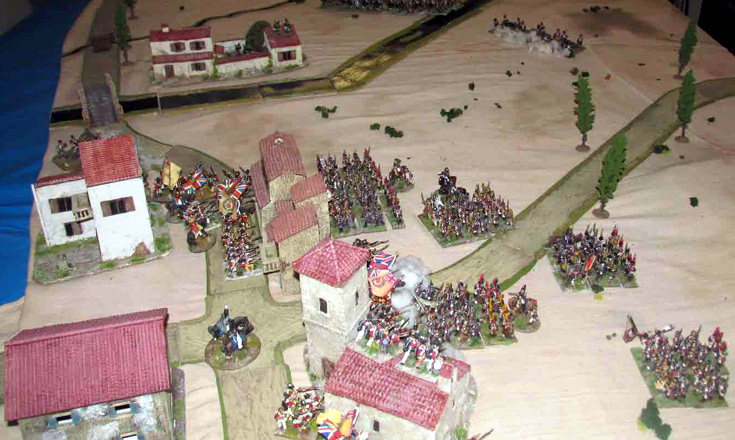 I suppose this game could be described as a “bathtub Corunna”. It was based loosely on a scenario in Charles S. Grant’s Scenarios for Wargames, but we scaled it down a lot, as we wanted something we could finish in a couple of hours, played out on an 8×6 foot table. In the photo above you can see my foolproof and low tech way of lengthening or shortening my 12′ wargames table, by stretching white sheets across the ends. It also has the advantage of serving as a place for off-table figures, rules, dice and beer.

The aim of this evening’s game was for the British to keep the French out of the port until nightfall. The French had 16 turns to take the place. The British had four battalions of foot, a unit of riflemen and a 9-pounder battery, while the French had six battalions, two regiments of chasseurs-a-cheval, and a battery of 8-pounders.We knew it was going to be a tough one for the French, so Sean and I decided to concentrate all our battalions in the one place – attaching the town from the south, and hitting the British defences near the church.

The British deployed the rifles in the walled inn to the east of the town, their guns on that side of the port, and three battalions of infantry covering the southern and eastern approaches to Elviña. Mark and Joe placed their fourth battalion  in reserve near the town’s little harbour.

The six battalions formed into two massed columns, and rolled forward. The odds looked good – we had three battalions to each of the British ones in that sector, and we were reasonably optimistic. That, of course, was when things started to go wrong.

The first problem was one of timing. Launching a massed assault is harder than it looks, particularly when the British began picking on a couple of the battalions. When Sean’s attack went in his battalions had become staggered, and one was forced to retire from musket casualties, while a second battalion faltered. That left just one battalion, which was repulsed after a turn of melee. Over on their right my own three battalions were also having problems – one faltered thanks to musket fire, but the other two charged home en masse.

This time it was the British who retired in disorder. Unfortunately they regrouped and occupied a couple of buildings on the edge of town. While my own battalions sorted themselves out, they now faced the harder task of winkling the British out of a built-up area.

Over on the far side of the table the riflemen holding the inn and its courtyard sniped away at my chasseurs, but otherwise neither the skirmishers or the chasseurs played much part in the battle. Instead, the fate of Elviña was being decided over on the far side of the table. There, Sean’s Frenchmen had pulled themselves together and launched another assault on the British by the church. This time the attack ground to a halt before the French columns reached the British line. A little way to their right my own battalions were also having a tough time of it, taking casualties and then refusing to storm the buildings in front of them. it was now Turn 12, and it was clear that the French weren’t going to win this.

Even if we pulled back, rallied, reformed and launched another attack, it would be the final turn of the game before we charged home. So, victory was duly awarded to the British, who fought valiantly in defence of the town, and held their ground against the massed French battalions. With hindsight we probably should have given the French more troops – or at least more time. That though, is one of the fun things about scenarios – you don’t really know how they’ll pan out until you play them!