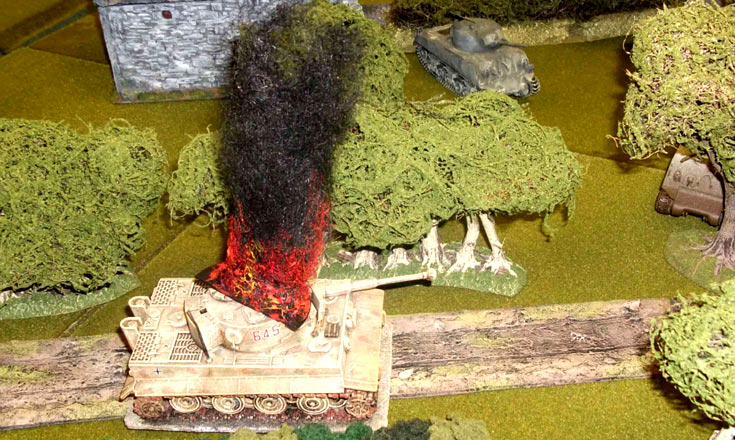 This was another “League of Gentleman Wargamers” gig, played out over a weekend in Kirriemuir, in the north-east corner of Scotland. We meet up two or three times a year, and we all have far too much “kit” for our own good. That means games tend to be on the large side, and are played in the local Brownie (Junior Guides) hut. For this Second World War weekend we played two different types of games. On the Saturday the games were face to face ones, fought out on small (usually 6×6 foot) tables. Then on Sunday we put all the tables together, and played out a huge multi-player game on a 20×12 foot table, with a 6×4 foot pop-up hole in the middle, and a small 4×3 foot extension on one side. That way everyone could just about reach anywhere in the table. The rules we used were Disposable Heroes. While probably not the most intuitive Second World War skirmish set on the market (I prefer Rules of Engagement), at least everyone knew them, and the games rattled along at a reasonably good pace.

During the Saturday we all played four games during the course of the day, each following the different scenario. The first was “Hunt the Machine Gun”. The premise was that German morale would plummet when the defenders lost their heavy weapons, so the Allies had to track them down. Unfortunately the only way to do this was to expose yourself to their fire, or else to literally walk over their positions. In my game (played against Kevin) I didn’t destroy a single machine gun, but lost half my platoon trying to winkle them out. Game two was a meeting engagement in a village, with victory going to the side with the most points. These points were written on slips of paper, and hidden under the buildings, to be counted up at the end of the game. This meant that you didn’t know if the building was worth 300 points or nothing at all, so the onus on both sides was to grab as much real estate as possible. In my game (played against Andrew Nicholson) I seized half the village, and the Germans took the other. I was able to plaster them with artillery though, and eventually winkled them out of another building, to win the hard-fought little game.

The next scenario was altogether much more bizarre. The premise was that groups of looters were running about behind the lines, sacking buildings, stealing stores and equipment, and generally making a nuisance of themselves. In our game Peter Nicholson played the American looters, while I fielded a team of British military police. There were two ways to stop the looting – ask the looters nicely, and try to get them to surrender, or to go in all guns blazing. I opted for the first approach, at least to begin with, but I didn’t have much success. It was almost a relief when they started firing at me, so I could fire back. Each turn I got another vehicle full of police as reinforcements, and gradually I either garrisoned most of the buildings, or gunned down the looters. Order was restored, but I still lost about a squad-worth of police in the process. It was a great little game, and my highlight was when I successfully persuaded one team of looters to surrender, just as they were about to roar off the table in their stolen truck.

The final game was a short one as we had to pack up after an hour, but again it centred around a village, this time held by the Germans. My British had to winkle them out, and capture as many buildings as we could. it wasn’t really “do-able” in the time available, but Dale Smith put up such a good defence that I didn’t make much headway, and even lost a tank in the process.  So, four face to face games, all with different objectives, and scaled in such a way as to allow us to gradually resume our acquaintance with the rules. Like I said, Disposable Heroes are a bit quirky, especially the bit where only half a squad can shoot, or that it doesn’t really occupy the ground the figures are on, but a more abstract area. Despite these quirks we all managed to pick things up quickly, and progress to games involving more toys, including tanks and vehicles. |In essence, these games prepared us for the mayhem of the big Sunday game!

The Sunday game was loosely based on the battle around Villers Bocage in mid-June 1944. The town and the countryside around it was filled with Allied softskin vehicles, clogging the roads and generally getting in the way. The Germans appeared, led by Michael Wittmann in his SS Tiger tank, and their aim was to shoot up as much of these “targets” as they could, racking up points as they did so. Unlike in the real battle we didn’t have loads of Cromwell tanks, but we had Shermans galore – not just British ones but ones in American and French colours too. They poured on and tried to protect the softskins, while fighting off the Germans. You scored points for each tank you brewed, and soon both sides were scoring heavily as tanks of both sides were ripped apart. This was a purely tankie game – very little in the way of infantry made it onto the table, apart from a few British anti-tank guns which were scattered around the huge tabletop at the start of the game. This was all about getting the big toys onto the table, and having fun with them!

One of the quirks of the game centred around the big hole in the middle of the table. Six roads led onto it, and when a tank column drove off one of them, then they would randomly dice to see which other road they’d appear on! The idea I suppose was that the road network there was messed up by carpet bombing or such-like, and it was pot-luck where you’d appear. My troop of four British Shermans calmly motored up a bogage-lined road and off the table, only to appear in the very heart of a German tank formation! I gave as good as I got, but after losing two tanks I pulled the others back, and this time I appeared in a safer spot – tucked behind a troop of French tanks, who were busy fending off a spirited German attack. My two tanks joined in, and despite losing my Firefly we held the bad guys off.

Elsewhere on the table Wittmann was brewed up by a Sherman (the two Nicholson brothers fighting their own private duel as usual), but as the Nazi tank ace was deemed a “hero” he survived, and took command of another Tiger. Peter Nicholson promptly brewed that one up too with a lucky shot from a Firefly, and this time the SS Obersturmführer went down with his tank. The table was so big that this sort of private battle seemed the order of the day. In clogged streets of Villers Bogace the British and the Germans tried to hunt down each other’s tanks, in streets lined with burning trucks, half tracks and bren carriers. On the other side of the table Charles S. Grant and Dale Smith fought their own private war in the streets of another Norman village.

One high point for me was my own little battle with Dale. I received a Wasp flamethrower by way of a reinforcement, and started chasing Dale’s captured halftracks around, trying to fry them. This silly little form of entertainment lasted until it was time to pack our toys away!  One of the interesting features of the game was a card system invented by Barry Hilton. Every player had a card or two, which could be played as a one-time event (such as an out-of-ammo card played on an enemy shooting at you), or else given to a tank as a permanent bonus (like being commanded by a tank ace, making it easier to shoot, or better at defending against incoming fire). to add a little more spice there were also a few completely random events, such as blanked carpet bombing of a row of tiles by the US Air Force which hit friend or foe alike!

Eventually 4-o-clock rolled around and we had to pack our toys away. We all had a great time, and while these games aren’t the most historic wargames around, they’re great fun to play, and look great. After all, how often do you get the chance to fight out a tank battle in 1:48th scale, on a 240 square foot table?! Until this month I hadn’t played with my 28mm Second World War for ages – for over a year. Now I want to buy more figures and tanks, and give them another airing!