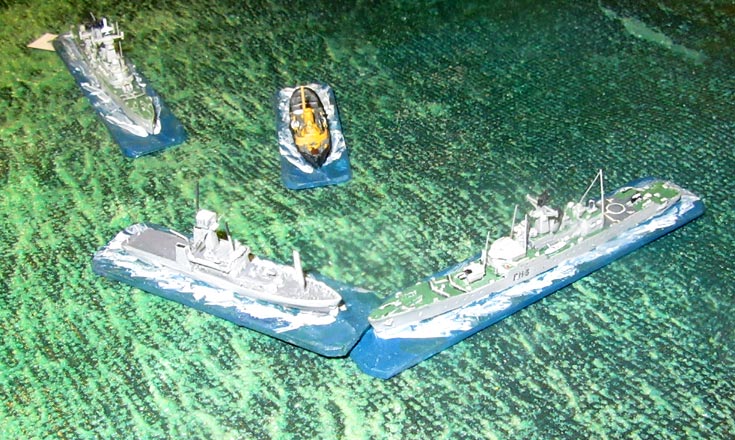 The (Third) Cod War, There’s Something Wrong with our Blood Fish Today, 1/1200 scale

This week we were going to play a Napoleonic game. Bill Gilchrist was going to supply all the figures, but unfortunately he took ill on the way in, and so we were left game-less. However, Peter gave me a lift home (15 minutes there and back), and I grabbed something else. We could have played Napoleonics – after all I had all the kit for both sides – but I really couldn’t be bothered lugging six boxes of lead around. Instead I grabbed just one box – one that contained both the models, the play aids and the rules, all in one handy package. So, instead of fighting in Spain in 1812, we took to the choppy seas off Iceland in 1975, playing one of the silliest and most enjoyable game in my leaden repertoire.

We’ve only played one Cod Wars game before, more than a year ago, but despite everyone having a lot of fun we haven’t played it since. This was rectified this evening. First, we scattered three British trawlers around the centre of the table. The table was the DFA, or “Designated Fishing Area” – a sort of protected fishing ground. This protection came in the form of two British frigates, Falmouth (an old ship of mine) and Scylla. they were supported by a small chartered British tug, the Euroman. Coming up fast from the northern table edge were to ICGV “Icelandic Coastguard Vessels”, the Tyr and the Aegyr.

Campbell and I played the British, with a frigate each, while I also ran two fishing boats, and Campbell a third fishing boat and the tug. Peter and Bart commanded a ICGV each. The way the game works, the side trawlers get a “Cod Point” every turn they have their nets down. You can only do 8 knots while fishing, so this made them pretty vulnerable to getting their trawl nets cut by the Icelandic gunboats. The Icelanders have to manoeuvre within 1″ of the trawler’s side to attempt a cut, and for good measure they also tow a net-cutting device, to make them even more deadly.

The job of the frigates and the tug was to keep the ICGVs away from the fishing boats. Nobody could fire a gun or a missile – the only “weapon” was the water fire hose on the tug Euroman, which had a 6″ range. So, essentially we were playing dodgems (or “bumper cars” as they call them in the States). In other words, bumping was the name of the game! The three trawlers (Port Vale, William Wilberforce and St.Giles) had two sets of markers, made from orange-painted mapping pins. One meant the nets were deployed, the other that they were being hauled in. Obviously, the longer we kept the nets down, the longer we garnered “Cod Points”. As it took 10 turns to retrieve the nets, this meant that timing was everything.

The first clash came when Peter’s Tyr headed for the St. Giles. The ICGV broke past the British screen, and was on course to intercept the trawler when Campbell turned about and gave chase. Before we knew it the Scylla had sped after the Tyr, and managed to ram her in the stern, sticking the frigate’s bows into the Icelander’s flight deck. The damage was enough to force the Tyr to break off and head for home. Incidentally, if you sink an enemy ship you lose the game. If Campbell scored a “6” in on the ramming chart that’s exactly what would have happened, so he was playing a very high risk game! This time though, it paid off. Before we go on, let me tell you about the beeping. Before moving, every skipper had to obey the Rules of the Road, and tell neighbouring ships which way he was turning – one beep for port, two for starboard, and three for astern. This constant beeping by the players was one of the delights of the game!

Scylla got a big chunk knocked in her bow, and she lost some engine power as a turbine was knocked off line, but she was still in the game. That meant the two frigates and the tug could gang up on the remaining ICGV, the Aegir. Bart though, was a wily customer, and he kept trying to get through to the trawlers. In the end, after a couple of turns of deft manoeuvering, the Aegir rammed the Falmouth, hitting the starboard side of the focscle. Both ships were slewed off course, which actually prevented a four-ship pile-up,. as the Scylla and the Euroman were also heading for the same little spot. The tug tried firing her water fire hose too, but it missed.

That’s Falmouth – F113 – a ship I cruised around the Caribbean in a decade and a half later, just before she was scrapped and turned into razor blades. Anyway, Falmouth took light damage to her bow, but Aegir suffered too. Not to be outdone, Falmouth gave chase, and two turns later she ground her damaged starboard bow into Aegir’s port quarter, badly damaging her flight deck. That meant that Aegir had taken two medium hits. one more and she would have to break off and head for home. A turn later it happened again, as Falmouth turned and clipped the ICGV’s stern again, pretty much in the same place. The frigate was undamaged, but that put Aegir over the edge, and the was forced to set a course for Reykjavik.

We weren’t quite done though. All this time Peter’s Tyr had been heading back north, having broke off the action. He had a last moment of triumph though, as the William Wilberforce passed ahead of him, nets down, and he managed to cut them just before he limped off the table. In the end though, it was all down to points. We’d been fishing pretty consistently throughout the game, and this loss of 10 Cod Points was countered by the 20 extra we’d gained for sending the ICGVs home. So, the game ended in an emphatic British win. The rules we used were David Manley’s There’s Somerthing Wrong with our Bloody Fish Today, available free on-line, and the models were an assortment of 1/1200 kits, from my collection. the two ICGVs were converted, but one day I’ll find more ships for this, and we can have a larger and even more frenetic game. Still, this was just about as much fun as you can have on a wargames evening, without actually shooting at anyone!

Tags: There’s Something Wrong with our Bloody Fish Today!