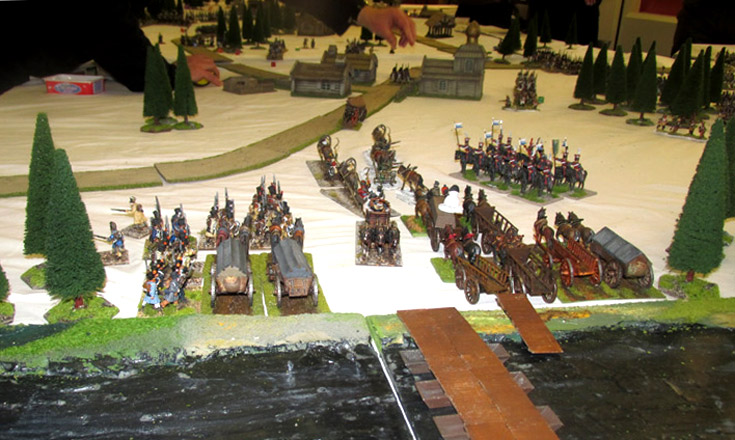 The latest League of Gentleman Wargamers’ extravaganza was played out in the snowy wastes of Russia, in a game set during the Retreat from Moscow. the whole thing was engineered with great aplomb by Charlie Grant, who is clearly destined for great things in the military planning line. Essentially though, on the first day (the Saturday), we played three scenario-based games apiece, all involving various aspects of the retreat. There were about six of these game altogether, so that all dozen of us could play three of them apiece. In all three games you commanded troops of the side you’d fight for in the big Sunday game.

So, my Russians and I took on Andy Nicholson in a game centred around the escape of a French pontoon train, Chris Henry in one where various Russian detachments had to harry a larger retreating French column, and one against Charles Grant, where my blocking force had to stop his Frenchmen in their tracks.

In fact, Charles proved too wily for me, and a few bad decisions by me, and a couple of disastrous die rolls saw my blocking force vanish, leaving the road back to Paris wide open. the game against Chris was more fluid, but he was on course to fighting his way through, despite all my Cossacks could do to hinder him, or loot his wagons. I did manage to foil Andy though, but then again no French player managed to win the “Pontoon train” scenario, as the odds were stacked against them from the start.

A nice dinner in Kirriemuir’s finest hotel was followed by a piss-up, where the Grants, Kevin, Chris and I drank until closing time. So, it was with a slightly thick head that I returned to the hall on Sunday morning, to play my part in the big game. The previous evening, before we left for our meal, we pushed all the tables together under Charlie’s direction, and so the big game was all ready when we trooped in the following morning. The french had various contingents strung out along the 32 foot table,  with Russian detachments appearing all along the route. it was a sort of Operation Market Garden in reverse, with the French trying to pull back towards the final table, where their engineers were waiting for the pontoon wagons to span the Kalashnikov River. Beyond it lay the open road to Paris.

Actually, in Charlie’s scenario, the fate of the French army was largely irrelevant – it was all about getting the Emperor in his Marbot sledge safely over the bridge and away to safety. This was probably just as well, as the beleaguered French were clearly faced with a real challenge if they wanted to extricate their army as well as their leader.For my part I started way at the far end of the table from the bridge. Along with Peter Nicholson my job was to roll up the French rearguard, ably commanded by Andy Nicholson and Kevin Calder. The trouble was, I drew the short straw, and most of my troops were militia – Opolchenie – who didn’t look like they could hold their own in a fight. Fortunately I had a battery of horse guns with me, and if you rolled well for reinforcements, you got the odd wandering band of Cossacks. And so the fun began…

On my corner of the table Kevin detached his wagons with a strong escort, and centred his rearguard’s defence around two battalions (one of them being an Irish one), and a gun battery. Fortunately for me, in response to my first shot of the game from my own guns, Kevin rolled a cataclysmic result, and his guns vanished. After that it was a matter of remorseless pressure. Kevin saw off three of my militia battalions, but one after another his units eventually succumbed to the Russian steamroller. Even a detached unit of Andrew’s French got swallowed up by them, as it fell behind the rest of his retreating force. Still, Andrew didn’t care. He’d bested his brother Peter in a straight fight, and that for him was the whole point of the weekend!

Further up the table the pontoon wagons rolled on up the road, as French forces tried to keep it open in the face of a string of Russian columns, all trying to block the way. While all this was going on Napoleon in his sledge slid on towards the distant river, with French units fighting and dying to keep the road open for him. By lunchtime it became clear that the Russians weren’t well-placed to prevent his escape.

So, it all became a matter of denying the French engineers the pontoons and planks they needed to finish the bridge over the river. This wasn’t so easy as it looked though, While Peter and I did our best to destroy the rearguard (which pretty much died to a man), further west the Russians weren’t able to punch their way through. When they did cut the road, just north of the beleaguered Neapolitan contingent, a spirited French counter-attack opened the way long enough for a few wagons to break through.

As Napoleon’s sled reached the bridge and with an hour or so still to play the Russian attacks became even more desperate. It seemed almost impossible that the French could hold, but they did so just long enough for the last of the wagons to reach the bridge, where an impatient Emperor was waiting. Further back it all started going horribly wrong for the French – the road was cut again – this time for good, and as the rearguard was finally chopped to pieces the Russians raced west, isolating more French and Allied units, and making sure they would never make it out of their now isolated pockets.

Meanwhile, while the Grand Armee died, the engineers did their thing. There was one last chance for the Russians, when in Bill Gilchrist’s column – the one to the south of the bridge – a gap in the French line allowed a regiment of Russian ulhans commanded by Charlie to break through by galloping across a frozen lake. They raced for the bridge, but were stopped short just 8 inches away from the Emperor, thanks to some lucky defensive musketry.

So, the game ended with the French putting the last planks into place on the bridge, and the Emperor’s sled driver getting ready to make the crossing to safety. So, as umpire (and occasional Russian player), Charlie gallantly called the game in favour of the French. The Emperor had escaped to fight another day. The same couldn’t really be said for the Grand Armee. While a few regiments might have made it over the bridge, most of the army was now lying dead in the snow, well to the east of the Kalashnikov. So ended another excellent LoGW game.

The dynamics of the group have changed over the past year or so, with some guys having left, and others come on board. What we’ve got now is a group of like-minded guys who really know how to stage and enjoy a great wargame. I’,m certainly looking forward to our next get-together in February – a foray into the Indian Mutiny.