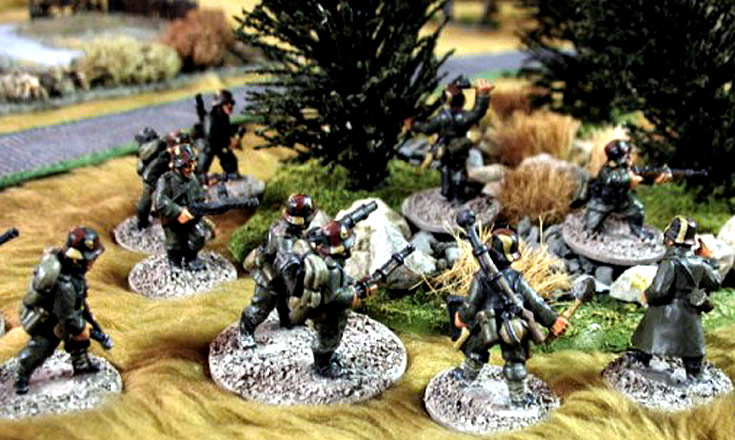 With Angus away in Orkney for a few days, this game report is brought to you by Bill Gilchrist. The rather unusual game was set in Silesia in the aftermath of the First World War – a hotbed of national and political fervour. So, while it isn’t a pure Great War game, it certainly involves the troops and equipment of the conflict, albeit in a slightly different post-war setting. Trust Colin Jack to devise a completely original scenario, for a period few have heard of! Anyway, here’s what Bill has to say;

Colin Jack and I have built up a collection of late WWI German figures which can be used for WWI or for later actions involving Freikorps units. Colin came up with a fictional scenario of a Freikorps attack on a Polish held village in Upper Silisia in 1920. Upper Silesia was a mixed ethnic area whose fate after WWI was to be decided by a plebiscite. This was held to see whether it should become part of the new Poland or remain part of Germany. Arounbd this time there was considerable ethnic violence from both sides attempting to doctor the result. Following the plebiscite which voted in favour of Germany the region was split between Poland and Germany with half the population and the main industrial centres being granted to Poland.

The game was fought along a 8ft by 6ft table. Colin and I deployed five battalions of heavily armed of Freikorps facing the Poles, whose force consisted of three battalions of lightly armed irregulars, but with the support of a Russo-Balt gun truck. The German Freikorps attacked across the width of the table to take the village held by the Polish irregulars under Bart Zynda. My Germans advanced on foot and struggled forward under machine gun fire and very accurate shelling from the Russo-Balt. Colin’s two battalions arrived by bus.

They then drove down the main road before debussing and attacking the village across a field and a cemetery. Eventually my machine guns knocked out the Russo-Balt truck, and we both made headway against the Polish troops in the village. My minenwerfer which had been manhandled almost to the village fired only one shot during the game, but it managed to destroy the Poles’ sole Machine gun!

We decided that given the imbalance in the equipment on each side that the game was actually a Polish victory, given the time it had taken the Freikorps to get to just the edge of the village. This, of course, was also to make Bart feel better, as he spent the evening commanding his fellow countrymen.