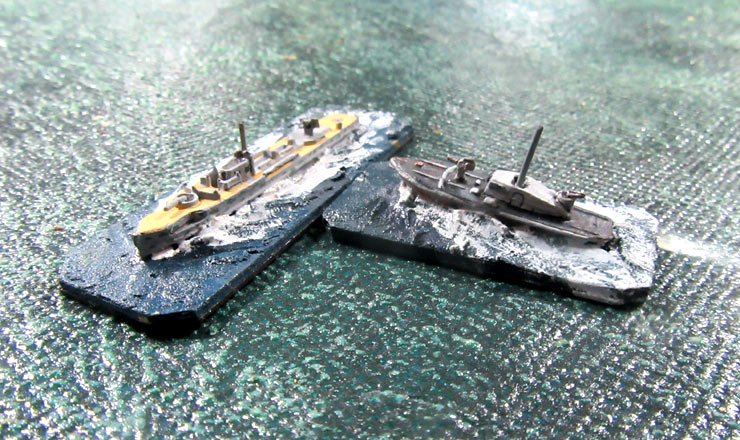 A few weeks ago David Manley sent me a playtest version of his new fast-play rules for WW2 Coastal Forces. I promised to give them a go, and so that’s exactly what we did. I’ve used a few different sets over the years, and they usually fall down in two areas. the first is they’re too slow – taking three hours to fight a two minute fracas just seems wrong. Secondly, its often really hard to get torpedoes right. The torpedo rules are crucial to this kind of game. Well, as this was a learning game we left them for our next game. This was all about moving, shooting, and seeing if the rules were as fast-paced as David claims.

We had five players, so everyone got two boats to play with – a Motor Launch (ML) and a Motor Torpedo Boat (MTB), or their German equivalents R-Boats or S-Boats (aka E-Boats). There were three British players (Peter, Alistair and I), and two German ones (Bart and Campbell). We played the game without bothering about nighttime spotting (this was a moonlit night), and kept bigger ships out of the way. this then, was more of a nautical dogfight than anything else, played out on an 8×6 foot table.

Inevitably, both sides started off by heading towards each other. my British boats were slightly different from the other players – I had small British Powerboat Company craft – a small MTB and a Motor Gunboat (MGB). I stayed at the sides, so all my guns could fire at the German boats, while Peter and Alistair headed straight at ’em.

Now, each boat had a card like the one below, where we used markers to show speed or damage. it also listed other useful stuff, including the armament – where it was located or what you needed to hit the enemy with each weapons mount. Actually, the firing system was lovely and simple. You rolled a D6 to hit, modified by range and a few other factors like speed and target size. If you hit, then you rolled 2D6 for damage, with a modifier for size of weapon firing. You could do structural damage, and cause fires, but there was also a chance of inflicting more specific damage.

So, if you got this, you rolled two more dice to see see which bit of the target was damaged. So, in the boat card below, you roll two dice. A 1-3 on the first one means it hit forward, and a 4-6 meant it hit aft. A 1-3 on the second dice meant a bridge hit, and a 4-6 meant the 2-pdr. mounting was knocked out. Simple. Everyone got the hang of it right away.

With fire coming every which way the boats were starting to take damage. Alistair’s Fairmile B ML had all its weapons knocked out, and he took a bridge hit each turn, which meant he kept on the same course, as the helmsman was wounded. He cruised on through the dogfight until he was rammed and sunk by Campbell’s E-boat.

Movement and then shooting was by the turn of a card. You had a small pack with one card for each boat. The British were red cards, the Germans black ones. When the right colour came up your side got to move a boat. The pack was then re-shuffled and you did the same to work out firing. That meant there was a bit of tactical thinking involved – getting the first shot in, for instance, or trying to outmanoeuvre your opponent, but it also meant the game moved quickly, and everyone was fully involved in it all the time.

I shot up Campbell’s R-Boat, leaving it without any guns and damaged engines. Bart had an R-Boat so damaged it failed its morale, and limped off the table. Then, Campbell discovered that ramming works. It started when I semi-accidentally rammed his S-Boat with my MGB. I was slightly damaged, but Campbell was badly damaged. Still, he limped off, and while my little boat was then almost rammed in turn by the remaining R-Boat – I dodged it at the last minute – Alistair wasn’t so lucky. His Fairmile was duly cut in two by a ram from Campbell’s damaged S-Boat (below)!

Not to be outdone, Bart had a go against Peter’s Motor Launch, which was now almost dead in the water from engine damage. His S-Boat smacked her amidships, and the British boat started to sink. That’s where we ended the game. Effectively the British had lost two boats (both Motor Launches), while the Germans had one limping off the table. However, pretty much all of the remaining ships had been knocked about a bit, and so it made sense to allow both sides to break off and run for home, or pick up survivors, or whatever they had to do. So, it ended in a clear German victory. Next time though, we’ll have our revenge…

As for David’s rules, all five players thought they were the best thing since sliced bread. The general consensus was that they were the best Coastal Forces rules they’d played with, and they were fast-paced enough to live up to David’s “fast play” claim. I reported back to Davids, and since then he’s toned down the ramming rules a bit. I guess he hasn’t met Campbell, who has even rammed using dreadnoughts. Next time though, we’ll introduce bigger ships (and big guns), and torpedoes. That should really test these highly promising rules to their limits!