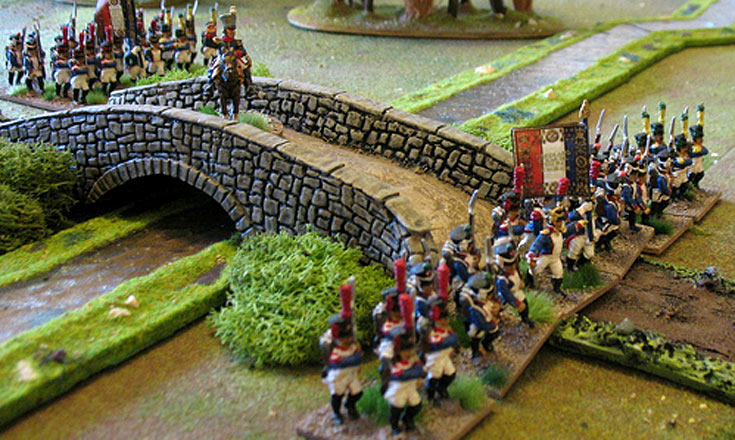 Bill Gilchrist laid on a nice-looking Peninsular game, set in the aftermath of Wellington’s victory over the French at Vittoria (1813). Here’s his game report;  It was a Donald Adamson scenario involving his hero Capitaine Gerard (Sir Arthur Conan Doyle’s fictitious character) in which a British Force (commanded by myself and Colin Jack) encountered a French rearguard force commanded by Hugh Wilson. . Donald provided most of the troops,  with myself providing the Puebla Bridge guard. The nice terrain came from Hugh Wilson, and the battle was fought out on his  12  by 5 foot table.

All the troops used the standard factors as given in the rules. The French infantry were “Reliable” in attack column, while the British infantry had “First Fire”. Veteran units were given the “Crack” special rule. We used the alternate move sequence with firing occurring after initiative moves. Player briefings, scenario events and OBs are available on Bill’s own blog, but essentially the French had ten battalions in three brigades (one being the bridge guard), while the pursuing British had six battalions in two brigades, plus supporting rifles and light infantry. Following on was a British cavalry brigade, consisting two regiments of light dragoons.

There were also some French “special events” triggered when Capitaine Gerard arrived at the House of the Fallen Women. He rolled a D6 to see what transpired;

1. Two of the whores offer themselves to the bold Gerard. Delay of D6.
2. One husky beauty leads the Capitaine to a boudoir. Delay of D3
3. Rides on next turn
4. Rides on next turn
5. Charms on the ladies with his ready wit. She tells him that a shepherd has reported a British force at point x on the map.
6. Having written a love sonnet to a dusky eyed beauty, she tells Gerard not only where the British are, but also the exact composition of the force.

My British infantry brigade advanced onto the table along the Royal Road, while the flanking Light Brigade played by Colin came onto the table in the first turn just south of the Sacramento River. This meant that the two French reserve brigades could act immediately against Colin’s isolated force. The main action and excitement in the game resolved around this apparently unequal struggle. The French immediately attacked the Light Brigade with four battalions, who closed quickly with the British and went in with the bayonet. Three of the four French battalions were broken in the ensuing hand to hand conflict (not much you can do when you roll 2 for the first break test and 4 for the supporting unit.) The remaining battalion retired shaken and disordered. Things could only get better for Capitaine Gerard’s boys.

A second wave of attacks by the French broke the British light infantry and a combined battalion, but both the French battalions were broken by firing and fled the field. This left the French artillery and two battalions including the “loyal Spanish” Royal Guard battalion facing the similar-sized remnants of the British Light Brigade. A long range musket duel ensued, while the Swiss battalion moved to the Los Mission Dos Putas Ridge as a distant support for the Puebla Bridge guard.

On their front the Bridge Guard had concentrated on the north side of the Puebla River. They allowed enough space on the north bank for the British to cross with three of their large battalions. The leading British battalion proved to be very poor shots – scoring just two hits with 12 dice at short range – so the French held their position. Only as the game was ending did the British manage to redeploy to get two fresh battalions into action. Even then their first volley of 10 dice proved singularly ineffective! The cavalry brigade had by now crossed the river but never got into a position to unsheathe their swords.

The game ended when the Light Brigade made full use of their horse gun and the superior range of their rifles to break both the French infantry battalions facing them in a single turn. Heavily outnumbered though they were, this doughty Light Brigade had broken no fewer than seven French battalions for the loss of just two of their own. True “Hearts of Oak” …..  With the Royal Road cut behind them the French survivors would have to make their way cross country towards the beckoning Pyrenees. Hardly surprisingly the game was declared an emphatic British victory. Huzzah!