With Orkney under the fairly light Level 1 – Light of Covid restrictions, we were finally able to stage a game, albeit one played out according to the still fairly restrictive rules. So, we’re able to manage one game every two weeks now, which is a real step forward. It also gives you something to read! This week, we were off to upstate New York colony, for a game set in the French & Indian Wars. 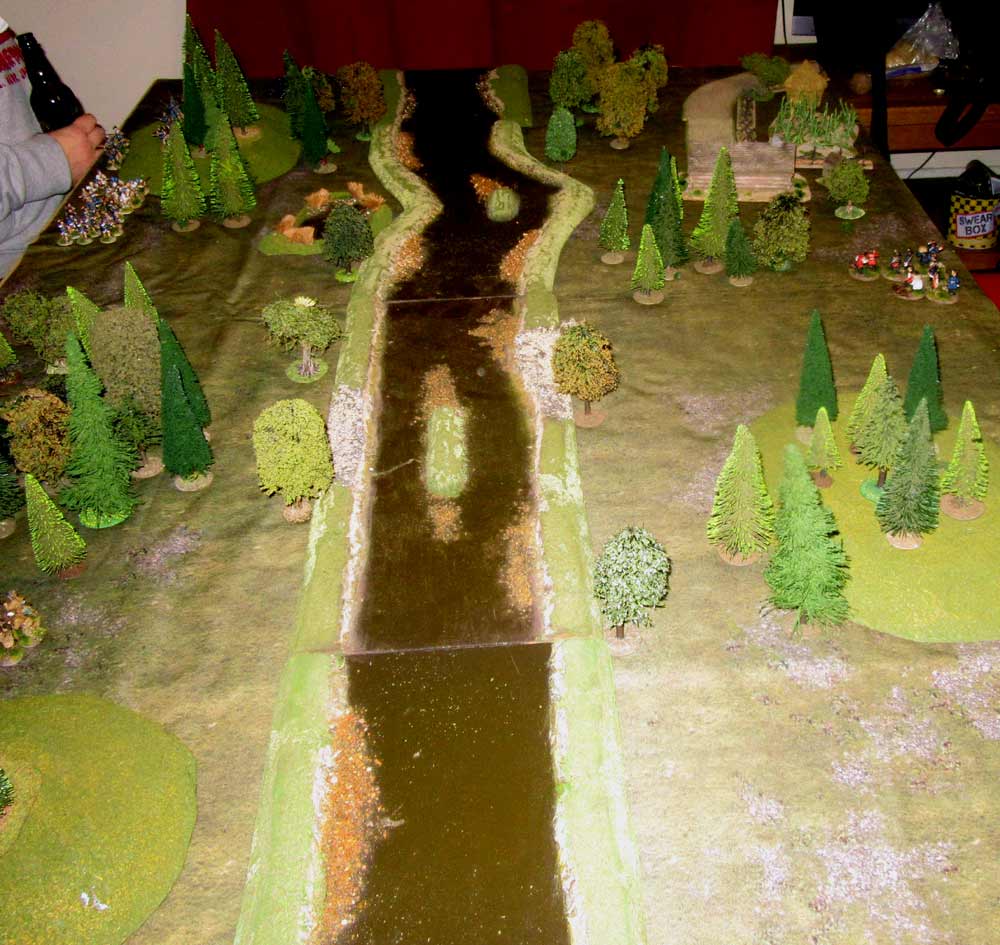 In this one, it was all about building a bridge. Both sides had equal-pointed forces – 36 points each, but the British also had two small units of Royal Engineers with them. Their job was to throw up a bridge across the Oswego River, and the rest of the British force was there to protect them. Lindsay and I divided it up equally, with her taking two units of green Colonial militia, backed up by Highlanders and a skirmishing Ranger force. I commanded two more small Ranger units, plus a larger unit of Light Infantry.

For their part the French, played by Gyles and newbie Glen were divided along ethnic lines. Glen had two large units of Iroquois warriors, plus a small skirmish unit of Coureurs de Bois. Gyles had a more conventional force, with two units of Canadian militia, and one each of French regulars and marines.  The game was played out on a 6×4 foot table, bisected by the Oswego River.

Both sides advanced fairly cautiously, but the Indians and skirmishers had the edge, and could ignore any delays moving through difficult terrain like woods – and the table had a lot of those – and also when fording the river. So, before too long my left-hand small Ranger unit found itself holding the woods on the south bank of the river, while a large warband of Indians started wading towards it. 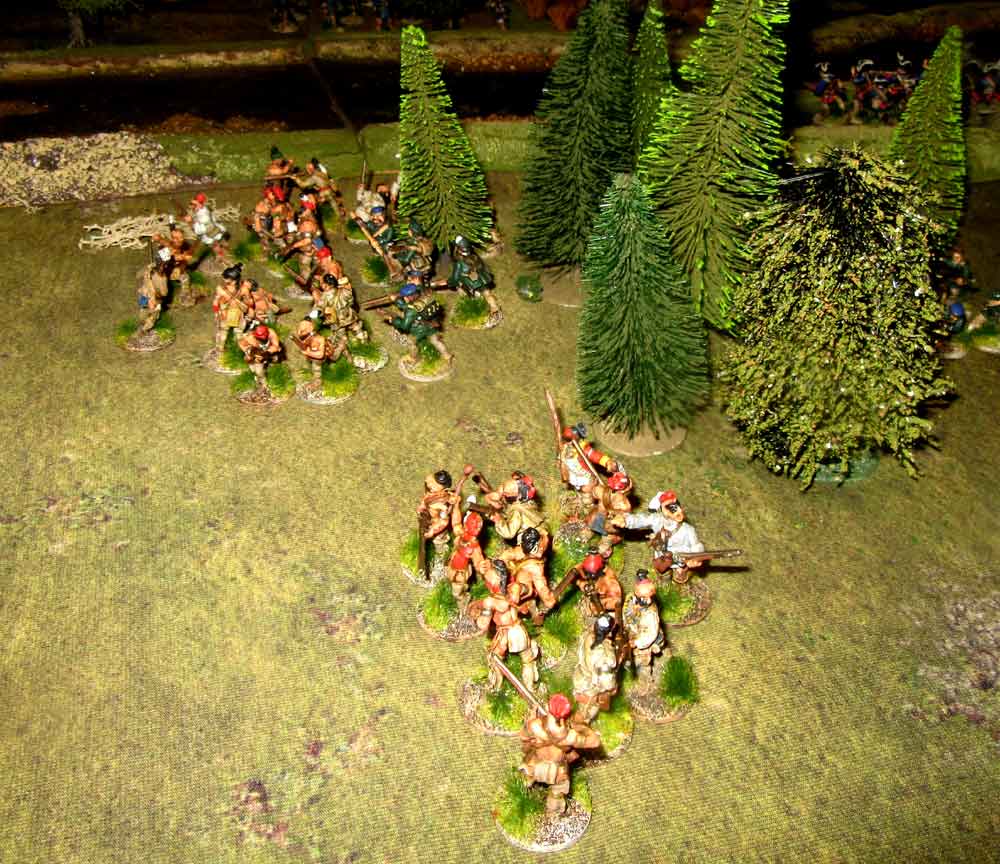 This clearly wasn’t going to end well. I fired a volley at them, and it disordered one unit, which temporarily gave it pause. However, they were off again soon enough, led by the second unit. The following phase the disordered Iroquois unit slammed into the Rangers, and amazingly were bounced back. Still, the Rangers took 3 casualties – half their strength. Then the other unit hit and wiped them out. 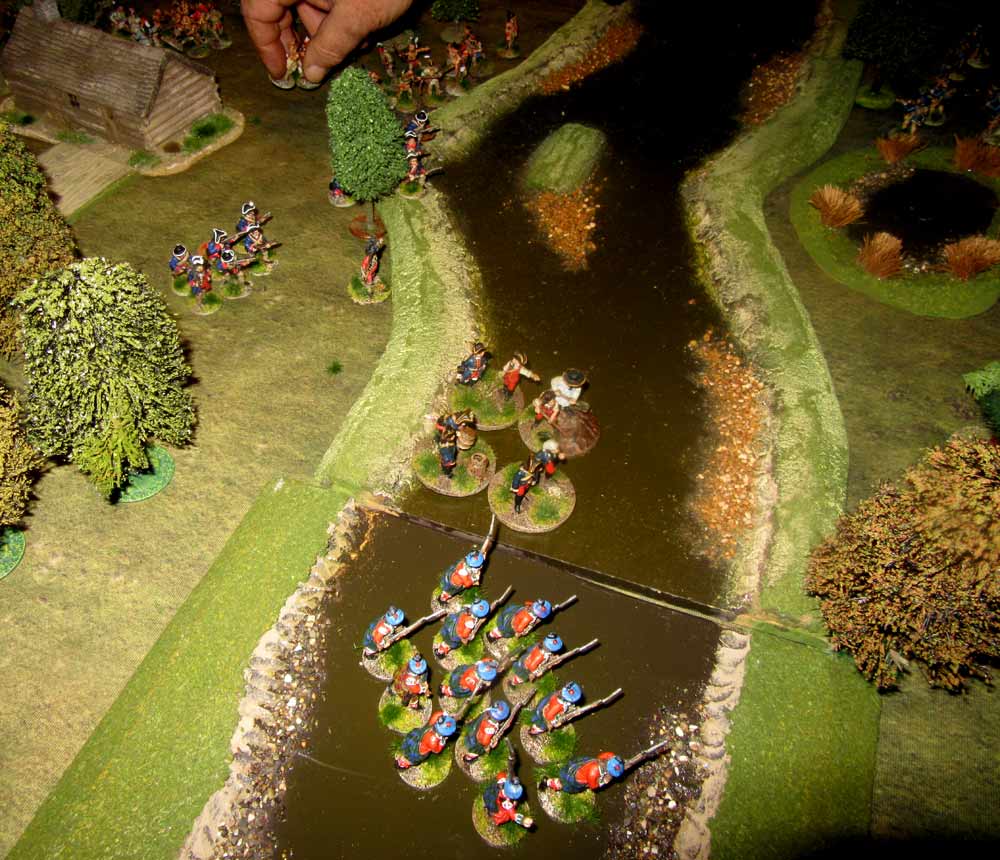 Next I deployed my light infantry, hoping to stem the Indian tide. Instead they got mown down like wheat in a gale, and within a turn their scalps were hanging from their foes’ belts. That left me with one small Ranger unit, which stupidly held its ground for two more turns, until it too was swept away. It seems that in Rebels and Patriots, large units of “aggressive” Indians are well-nigh unstoppable!

That was me out of the game. Meanwhile Lindsay had got her engineers into the water, and they were busy trying to build their bridge, supported by the rest of her force. The Highlanders tried crossing the river to cover them, but they soon started taking casualties from the Canadian militia hiding in the woods on the north bank. so, both they and the engineers started to be whittled down.

By now though, it was all too late. Glen’s Indians had reached the settler’s cabin on the banks of the river, and waded into Lindsay’s first unit of Colonial foot. they fought well, but it wasn’t enough, and they soon fell amid a welter of hatchet blows. Her second unit counter-attacked, but were picked on from Gyles’ marines on the far shore, and by those pesky Coureur de Bois, whose squirrel guns had a devastatingly long range of 24″. 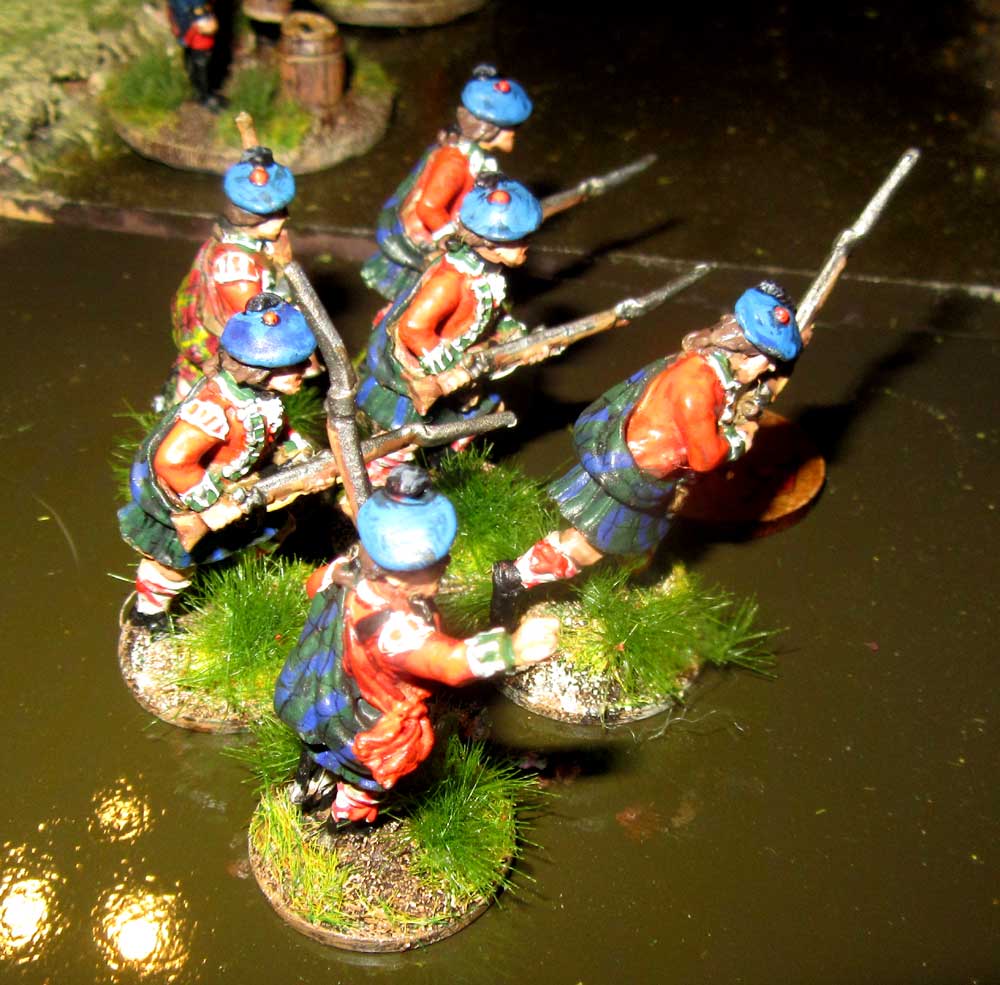 So, they were almost at half strength when the Indians hit them – and swept them away. That left us with just the last little unit of Rangers, which  would only last one more turn, plus what remained of the Highlanders and the engineers. Then, the game abruptly came to an end. We’d been rolling to see when it ended from Turn 8 on, and now, on Turn 10, it was all over. It was a palpable French and Indian victory, and I imagine any troops we had left would have been hounded through the woods as they fled. It was all good fun though, and it gave me a chance to use my repainted figures for the first time. Next time though – no big units! 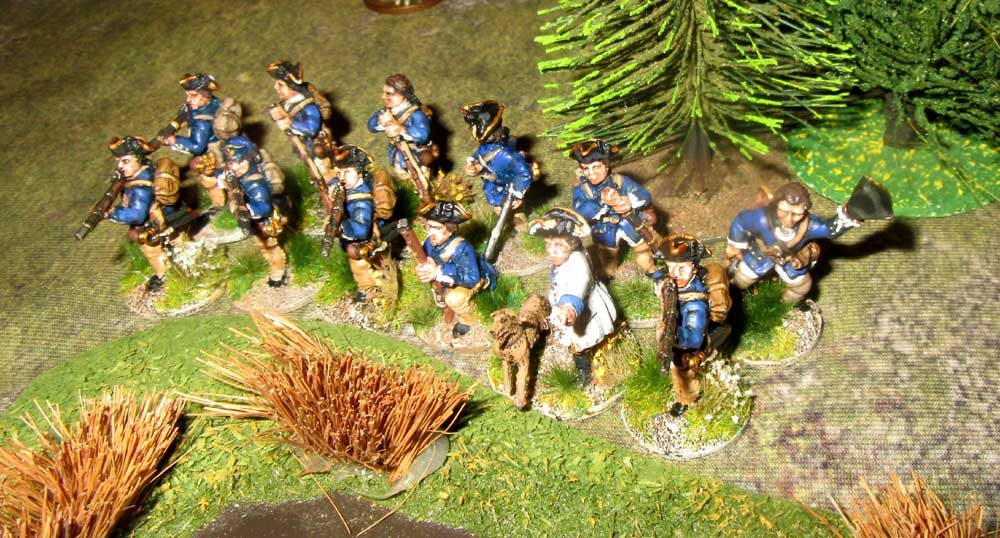