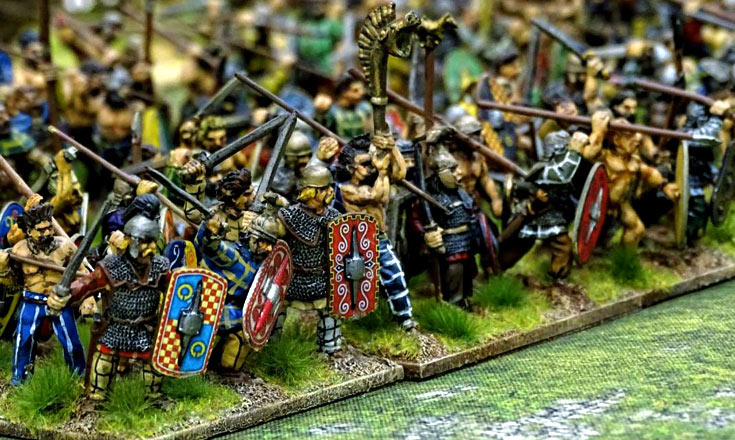 Like buses – you wait for ages, then two come along at once. So, this was our second ancient game in two weeks, largely because the first one proved so much fun that Gyles wanted another go at the rules. This time we fought a clash between a Roman army and a Gallic one, set somewhere in the territory of the Belgae, during Caesar’s Conquest of Gaul. Both sides had 120 points of toys, and we played the game out on a 6×4 foot table, covered in 20cm wide boxes.

This time there were three players – Gyles and Sean opted to lead the Gauls into action, so I took charge of the Romans. A fourth player, Mally, was watching but didn’t play, while Lindsay buzzed in now and then from her own game, and took some excellent photos. The table itself was dominated by two fortified camps – the Gallic one being a wagon laager – and a few scattered woods.

The two armies deployed facing each other – six warbands against six cohorts, with some cavalry off on one wing, and a unit or two of skirmishers. Sean hadn’t played with these rules before, so this was more about giving him a go, and Gyles another bash at them. Last week I’d relied on Peter to keep me up to date with the rules, but this time round I had to keep on top of things myself. Still, To the Strongest is very easy to pick up, and everybody got the hang of it within a turn or two. After that it flowed along nicely.

Obviously the main Gallic tactic was to charge forward and hope for the best. This wasn’t a game with much subtlety – the Gauls would either break the Romans or they’d get cut down. The only slight bit of tactical finesse came on the wing with the cavalry on it – the idea was that the river Scaldis (the Escaut, or Schelde) was securely lining the small table edge on the Roman right flank.

As the Gallic warbands plodded forward Gyles’ cavalry wing trotted towards their Roman counterparts-  Gallic cavalry of their own, albeit in Roman service. This would be an evenly matched cavalry fight, with fate depending quite literally on the turn of a card. The fight swung back and fore, but in the end it was Gyles who lost the first unit. Then my Audeii cavalry ganged up on the surviving Belgae unit, and wiped it out, along with its leader, Chief Semtex. So, first blood to the Romans, and six victory tokens in the bag.

By now the Gallic wave had reached the Roman line. Actually, for some reason only part of it did. The two Gallic commanders deployed with Gyles’ leading the first wave, with his alter-ego Chief Timex (that’s him standing on a rock), while Sean’s leader King Picanmix, carried on his shield, led the following three units. So, only one of them could reach the front, deploying on the left of Gyles. The others waited further back,waiting for a gap to appear in front of them.

One problem with this deployment was that when one Command failed, everything stalled. Gyles pulled some shocking activation cards, and so his units weren’t as aggressive as they could have been. The Romans through their pila (or is it pilums?) but never hit anything. They did better in the melee though, and scored several telling hits on the Gallic front ranks.

That highlighted another problem. The sensible thing would have been to disengage, and rally off some of those disorder markers. However, with Sean’s warbands behind Timex and his men, there was no change of breaking off the action. It was do or die. As for the Romans, their commander, the Legate Titus Assius (that’s him below) was quite happy letting the Gallic wave break on the rock-solid Roman line.

The first cracks soon began to appear. I started picking on a Gallic unit of Nerviii warriors which already had two disorder markers. One more and it would rout. Eventually I did it, and the first enemy warband bit the dust. Now, in the latest update to the rules this leads to a Rout test for all adjacent units to the left, right or behind. This led to another few disorder markers appearing.

The only bright spot for the Gauls came on the far left flank, where King Picanmix and his warriors caused a disordering hit on the unit propping up the Roman right. One more hit and the unit would flee from the table. Try as he might though, Sean couldn’t get that crucial second strike.

Instead, over on his right, Gyles’ front rank was beginning to crumble. Another unit took its third hit, and was lifted from the table. The Rout test that folled gave another a second disorder, and saw Sean’s unit of archers leave the table. By now the Gauls were running out of victory tokens. If the Romans got a dozen of them – and you got three for killing a warband – the game would be over.

There was now just a point to go. One more Roman push would win the game. In the end it came slowly. On Gyles’ far right flank the last Nerviii warband was out on its own, with two disorder markers. However, I couldn’t kill it off. Instead the points came from a supporting unit of Gallic javelinmen. The cavalry charged them diagonally, and they were swept off the table. So, that was it. All in all it was a fun game – at least for me. The main thing though, was that everyone had a good chance to learn the rules. Next time, I imagine, the Romans won’t win quite so easily! To help things along, I’ll paint up more Gallic warriors, to really test the Roman mettle.

3 Responses “Battle of the Scaldis, 57BC”