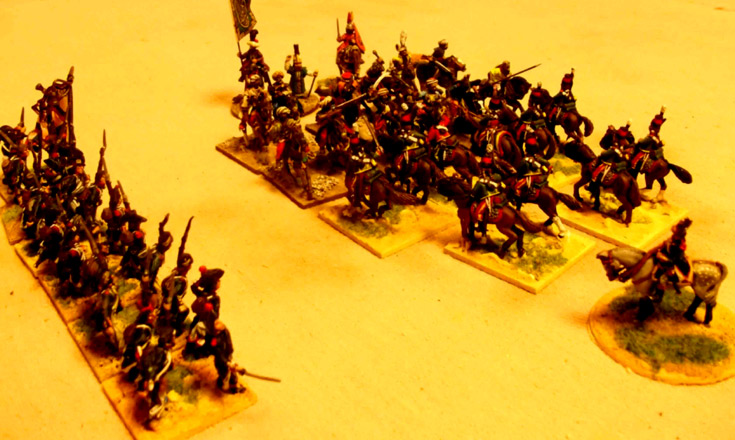 This was the second game using Chris Henry’s figures this month. Usually he has a band practice on Thursdays, but his bass player is also an accountant, and January is his “busy time”. With Chris at a loose end, we grabbed this opportunity to play with his Bonaparte in Egypt collection. The game was loosely based on the Battle of Shubra Khit (or Chambreis), fought on Bastille Day (13th July) 1798. it was the first clash between Bonaparte’s French army and the Mamluks, and it gave Bonaparte the chance to perfect the tactics he would use at the Battle of the Pyramids, fought six days later.

In our game, the Mamluk objective was to cause significant casualties on the French, while the French had to capture Shubra Khit village. obviously we scaled everything down considerably, leaving the French with a reinforced brigade of infantry, supported by a few guns, camels and cavalry. The Mamluks outnumbered them about 2 to 1, but only a small portion of their force were cavalry – most were infantry ranging from good quality janissaries to fellahin militiamen, eager to run away at the earliest opportunity. The Mamluk started the game defending the village – backed by an enormous gun – with the infantry on their right and the cavalry on the open desert wing on their left.

I commanded the French cavalry (including an impractical-looking dromedary unit), while Donald Adamson played the part of the up-and-coming General Bonaparte. Chris Henry – whose figures we used – played the part of the Turks, supported by Colin Jack and a few others. The French began by dividing their force in two. Most of the infantry formed into assault columns and headed towards the village, but two battalions were left to guard the open desert flank. Beyond a formidably gulley the heavily outnumbered French cavalry hung around, supported by a horse artillery battery. Bonaparte’s men made a rapid advance, and so Turn 2 they had reached the village. First they had to cut their way into the outer line of buildings, which were defended by Albanians. These bloodthirsty types were eventually driven off, and the French pressed on deeper into the town. Meanwhile, out in the desert the Mamluk cavalry rolled forward, timing their advance with a bombardment from some seriously over-sized Turkish guns. The French went into square, which of course was good when facing the cavalry, but not so good in the face of a relentless bombardment. After two turns the first square broke and ran.

A unit of spahis poured through the gap, but were charged by the French chasseurs-a-cheval, who had just negotiated their way across the gully. They arrived just in time to save two battalions of French reinforcements, who had just entered along the northern table edge. The chasseurs gallantly charged the spahis, who had been disordered and were milling around. In the ensuing melee the Mamluke were forced back, and the chasseurs pursued. The result was repeated again, but this time the French cavalry pulled back to regroup, as it was getting too far away from the rest of its brigade. The poor spahis were now standing in front of the main French gun line, and they were soon shredded by canister. That though, was about the only bright moment in a rather unpromising mid-game.

Over in Shubra Khit village the French were finding it tough going. One of their attacking units was broken by the Turkish guns, and the Turkish regulars were still holding out in the far corner of the village. That was when the rather rash decision was made to storm the gun battery. Inevitably the Turks rolled excellent dice, and the leading French battalion was eviscerated. A determined French commander then placed Bonaparte at the head of the next battalion, and ordered a “follow me” charge. The same thing happened again. Worse though, was to come. The Turks rolled a “6” for casualties to the general, and General Bonaparte fell. While this might have been a good thing for world peace and European history, it wasn’t particularly good for his tabletop French army!

By now the wind was knocked out of the Mamluk cavalry. The French reinforcements had plugged the gap in the line, and with the big Turkish guns diverted they weren’t able to take on the French squares. This meant an impasse, which the Mamluks tried to break by crossing the gully to take on the French dromedary corps and the horse artillery. Over there, the gunners caused casualties on the  Mamluk horse, and them, and when the disordered riders crossed the gully the heavily outnumbered French dromedary riders charged them. Amazingly, the Mamluks were beaten, and forced to retire. That means that as the game drew to a close the French desert flank had held. Victory would be assured if the French infantry could now drive the last of the Ottoman defenders from the village.

Alas it wasn’t to be. The French had already suffered very heavy losses, and were down to just a couple of battalions. When they launched their assault the Turkish guns fired into their flank, and that was it. Within a turn the French were driven from the village, as both units were broken by defensive fire. By now it was clear that the French had failed miserably, and the Mamluks were duly declared the evening’s winners. The game worked well, but with hindsight we might have made the Mamluks a little better than they actually were. Bill Gilchrist promised to work on the stats, to produce something more historical. He promised to try to re-jig them over the weekend, so when he sends them on I’ll post them below. All in all though it was a splendid game – full of colour – and a period you rarely get the chance to play. I’m certainly looking forward to out next desert outing.