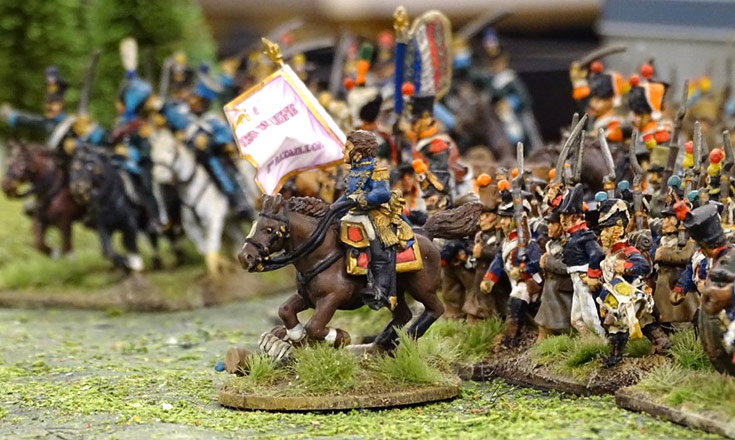 The plan was that I would lay on a small Napoleonic game, by way of letting the Orkney crowd try out these rules. So, I raided my toy box and laid on a clash between French and Allies and Russians, set in the spring of 1812, set somewhere to the north of Bautzen. Shaun and Rick played the Russians, while Gyles and I commanded their French and their German allies. The game was played on a 6×4 foot table. By the way, most of these photos were taken by Lindsay Bailey, who’s much better at working a camera than I am. Thanks Lindsay!

As I said, this was a small game, designed to familiarise ourselves with the rules. I like Over the Hills, but I hadn’t played them for ages, and so I was a but rusty. None of the other three had ever seen them before, so this was a learning curve. Fortunately the rules are pretty intuitive, and the game flowed along nicely. Both sides had equal forces – six battalions of infantry, divided into two brigades, plus another brigade of two light cavalry regiments. Both sides also had a 6-pounder gun battery.

True to form in most wargames, both sides advanced towards the enemy, with Gyles’ three German regiments on the French left, supported by the French guns, and my three French battalions on our right, backed up by the chasseurs-a-cheval. The Russian deployment pretty much mirrored our own, with Sean taking the cavalry and infantry on the Russian left. We both held back with our cavalry for the first turn – I was hoping to wear down his horsemen with small-arms fire, while Sean was waiting for the right moment to send in his lance-wielding ulhans.

When the infantry lines got within range both sides stopped and began blazing away. This prolonged firefight made it look as if neither side wanted to commit to a charge, before they thought they had a winning hand. It made sense, but eventually the impasse was broken by the cavalry. Sean charged his hussars at my chasseurs, and the two clashed over on the French right wing. The Russians had the best of it, but it was a close-run thing, and both sides pulled their horsemen back to lick their wounds.

Sean brought his ulhans up, and tried to charge the French battalion on the far right of my infantry brigade. They managed to form emergency square though, and the cavalry pulled up short. Then my second unit of chasseurs hit them, and the Russian lancers retired. This started a ding-dong cavalry scrap,. with both sides trying to rally their battered units, then send them back into the fray. In the end both sides managed to fight each other to a standstill, although the Russians seemed to get the worst of the affair.

Over on the French left the German brigade finally charged in, and were met by pretty devastating volleys from the defending Russians. The two battalions of the Baden regiment had led the way, but they were not only halted by the Russian defensive fire, but thrown back after the first round of melee. Still, they were still in the game, and the solitary hessian battalion covered their withdrawal as they pulled back to lick their wounds.

Over in the centre my French tried the same thing, with two battalions charging a single battalion of Russian jaegers. The French came pout on top, and the Russian light infantry were chopped up, and pulled back to the rear, nursing a “Fatigue Level” of 1. That meant that another hit would have wiped them out. Then though, Gyles artillery finished the job, and the unit broke and ran. The French weren’t getting it all their own way though.

The Russian guns promptly did the same to one of the Baden regiments, and then picked off one of my battered regiments of chasseurs-a-cheval. All in all it was a pretty good game for the gunners of both sides. That left the French in the middle still trying to make something happen.

The charge had seen off the jaegers, but my own units were pretty knocked about, and Sean relied on long-range musketry to whittle them down further. It was clear I couldn’t do much with them, so I pulled my units back to regroup.

So, the Frencnh infantry assault had failed, as had the Allied one. Both sides had worn out their cavalry, but the Russian foot was pretty battered too, and didn’t have the strength to press home an assault of its own. So, the game reached a sort of natural end, where both sides had worn themselves to a standstill. It wasn’t surprising really, as we started off with identical forces.

So, that’s where we ended it. the game was duly declared a draw – although it was more like a stalemate. The main thing though was that all of the players enjoyed playing with the rules, which they found easy to pick up, and challenging enough to keep up their interest. We’ll certainly give them another spin soon, and this time – I promise – I’ll read them beforehand, to save lengthy rules reading on the night.