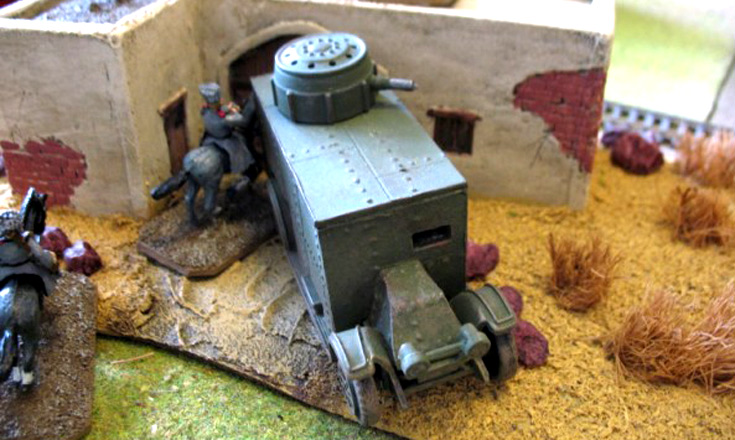 The Back of Beyond, Contemptible Little Armies, 28mm

With Angus missing out the game due to his temporary exile in Orkney, this report comes to you from Comrade Bill Gilchrist;  This weekend we played out a large scale Back of Beyond game set in 1920, in the short lived Far East Republic in eastern Siberia. This was a multiple player game, with hidden objectives, special events and some back stabbing. The action took place around the town of Khor on the Trans-Siberian railway, about 50 miles south of Khabarovsk. That means this game really was set in “The Back of Beyond”.

There were  four factions in the game, each with two players, who each had their own “objectives” and troops to command. The factions were: The Reds, The Whites, The Chinese, and The Interventionists (Japanese and British). Most commands consisted of three units and a support weapon (like a machine gun team, a field gun, or even an armoured car). The commanders in a faction had to cooperate with each other (yeah, right!), but only one of the four factions could win the game, and from that faction only one of the two commanders would be declared the overall winner. The scene was set for mayhem and backstabbing aplenty…

Each faction started in a corner of the table. In the centre was the town of Khor, with nine buildings, including a railway station which was a halt on the Trans-Siberian railway. The railway itself ran the length of the table. Holding the buildings in the town earned roubles if a train from the faction arrived as a special event (achieved by the turn of an event card). The cash total was also doubled if the faction held the railway station at the time – which of course guaranteed it would be heavily fought over by all of the factions. Reinforcements arrived either as special events, when a command had lost half its units, or were found in a building in the town. The Czech Legion held the railway station as an independent force against all the factions at the start of the game. Final victory was assessed on basis of control of buildings, value of remaining cash, and some specials, such as gaining control of the Tsar, who made an appearance on a train during the proceedings.

Effectively the commands from each faction which were furthest from Khor engaged their opponents, while the closer commands advanced rapidly to gain a foothold in the town. To the north of Khor the Japanese attacked the White Russians, while the British and the Mad Baron’s White Russian troops entered the town. These White troops entered a warehouse and found the parts to build an improvised armoured car. The Japanese cavalry and then the British entered the prison and liberated the political prisoners who joined them as extra irregular units. AAfter much firing, the Japanese artillery destroyed the home-made armoured car, but by then he had found a volunteer pilot who took to the air and strafed the Japanese interventionists.

The Mad Baron got to the railway station first,  and successfully bribed the Czech Legion to join forces with him. Shortly afterwards another trainload of Czechs arrived at the station and re-captured it. The station then became the scene of fierce fighting as the Czechs, Whites, Reds and Chinese all battled for its control! On the east side of the table the Chinese took the offensive against the Reds,  and the Chinese bandits and part of the Red army spent the rest of the game fighting over a worthless little railway halt, while the real battle was fought further down the line, in the centre of Khor itself.

The Reds established a foothold in the town, but were then badly worn down by the Chinese, who had just discovered a tank in another warehouse! The Chinese even launched an attack through a secret tunnel from the town hall that came up in the centre of the Bolshevik defences, around the Khor Grand Hotel!  Lots of reinforcements arrived for everybody, and were promptly thrown away on more suicidal attacks.

By the end of the four-cornered carnage it was the British who were left with the smallest force, but despite this, and despite never having  any cavalry – they still won the game. They held a third of the town (three buildings), they’d located and rescued the Tsar, and managed to hurried him away to safety. Unfortunately the Tsarina was killed by a strafing run by the Mad Baron’s aircraft – and he was meant to be on the White Russian side! The Red commanders ended up the clear losers, and holders of “The Wooden Spoon”. One of the two Bolshevik commanders was a loyal ally of the other, and even gave up a building to him so he could concentrate all his troops against the Chinese bandits. Nice guys finish last – especially after being taken advantage of by their comrades!

As usual with “Back of Beyond” games everyone had a real blast. The rules – as ever – were Chris Peers’  Contemptible Little Armies, and their Back of Beyond supplement.  They are simple and enjoyable, and always give a great game.