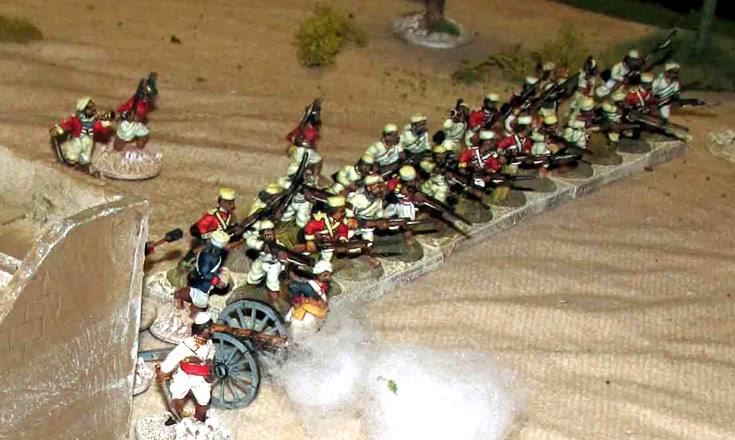 The recent release of the new version of Sharp Practice has caused quite a stir in the Edinburgh Club. The days of playstesting and ambiguity are now over, and we now have a shiny set of rules in our hands, ready to test out. So, that’s exactly what we did. A few of the guys have been playing using the rules to play a few Napoleonic Peninsular games, so last week I offered to field two games using my Indian Mutiny toys. This is the result. So, we laid out an 8×6 foot table, divided it into two 6×4’s by laying down an impassable river, and off we jolly well went.

Actually, it wasn’t completely impassable. A small bridge crossed it at the back of the Mutineer’s lines, so in theory one player could help the other. In fact nobody crossed the bridge during the entire game. Our job was to capture that bridge. On our table, the Mutineers formed a defensive position near a village (don’t they always?), and so the onus was on the British to winkle them out. They did the same on the other table too.  What you see above is that other table, viewed from the Mutineer’s end.

Jack Glanville was playing the British, and led the way with his unit of volunteer cavalry, supported by East India Company European troops. The mutineers commanded by John Glass were deployed behind a dry nullah, and in the first of two small villages. John tried a cavalry charge to start with, but his horsemen were driven back by the concerted volleys of the European foot, then the survivors were charged and kebabed by the Volunteer Horse. This caused the morale to drop among the Mutineers, and the infantry remained stubbornly on the defensive.

Over on our table Bart and I led forward a unit of British regulars (above), supported by Gurkhas, a unit of Punjabi Infantry and a small unit of British rifle-armed skirmishers. These skirmishers and their Gurkha counterparts proved the key to the first phase of the battle. They peppered Derek’s sepoys at long range, forcing them to deploy their own sepoy riflemen to counter the threat. This landed up in a rather untidy scrap between them and the Gurkhas. Inevitably the tough little Nepalese with their kukris won the fight. So, the way lay clear for a general advance… or so we thought.

Back on Jack’s table the European foot continued their advance, supported by the Volunteer Cavalry, while the force reserve – a small unit of Loyal Sepoys were kept at the back, stationed near the old mosque. This is where Jack started playing safe. He kept his distance, and at long musket range he began firing at the waiting sepoys. The sepoys had the edge in numbers, but the British troops were better quality. Both had smoothbore percussion muskets, so nobody had an edge in range. So, it came down to quality versus quantity…. and a modicum of luck with the die-rolling. After three turns, it was becoming clear that quality had the upper hand.

Over with us things weren’t so clear cut. the defenders had an artillery piece, and it proved devastatingly effective, ripping holes in the Punjabi unit, and slowing our advance. That’s when we brought up the skirmishers to target the gun crew using their long-range Enfield rifles. it worked, and as the crew were cut down to two men the fire slackened. The British and Sikhs were still heavily outnumbered though, and as we began our firefight we needed all the luck we could get.

It came from the far side of the table. After four turns of shooting the Mutineers facing Jack had enough. Casualties had been mounting, and while the British were able to rally off most of their hits thanks to spare officers and NCO’s, the mutineers weren’t so fortunate. Gradually they acquired enough hit markers to make their fire ineffective, and units started shuffling away. Soon they began fleeing the field. Thanks to the joining bridge we were using one Force Morale for both wings of mutineers, and all cthese setbacks led to it dropping to “0”. That marked the end of the game, as the mutineers broke and ran. So, a plucky little victory for the British, and a great little game – or rather two linked ones. I have to say, Sharp Practice is pretty darned good…