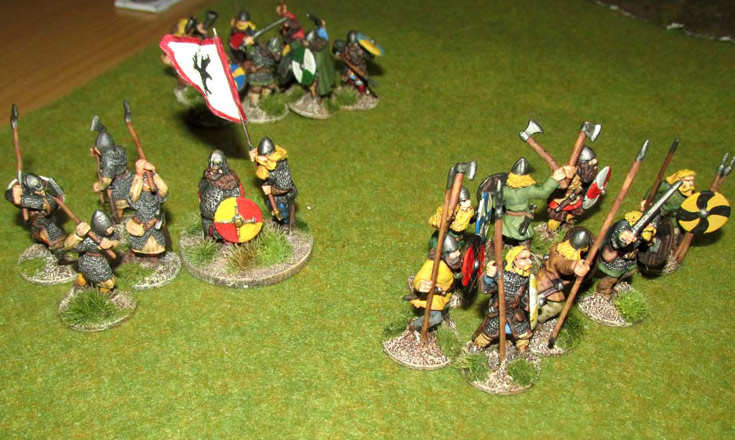 I found myself in Orkney this week, and so I played a game there, rather than in Edinburgh. The Orkney Wargames Club is a broad church, and hisotircal gaming is only a small part of it. In fact there are only four proper historical wargamers there, plus a few occasional ones. The rest of the church hall they use is filled with young types playing some sort of fantasy nonsense – role playing, Warhammer, Magic the card game – that sort of thing.  The historical guys are also fairly limited in what they do. It’s either the Dark Ages using Saga, or World War 2 using Chain of Command. So, having been forewarned, I packed my Vikings.

I actually played two games of Saga in the same evening. That’s one of the attractions – if you use fairly small forces the game is fairly quick, giving time to sneak a second game in before the hall closes. This time, as there were just three of us, the other two took turns to play against me. First up was Joe’s niece – I’m afraid I’ve forgotten her name. Anyway, she’s a teenager, and so I thought this was going to be a walk-over. it turns out she’s quite good at this, and her chosen army – the Anglo-Danes – have a few tricks up their mail-coated sleeves. We both had 4 points to spend on our armies – four units, plus our warlord. i opted for 12 levy archers, a unit of 8 bondi, and two 4-man units – one of huscarls, the other of berserkers. I like berserkers, as they’re always entertaining to play with.

Anyway, the aim of the game was that after five turns you had to have more points-worth of people on a central hill than your opponent. it sounded easy. So, I raced forward, peeling my archers off to harry the enemy flank from a nearby hillock. However, the Anglo–Danes kept out of bow range most of the time, and the rest just massed at the bottom of the hill, just out of charge range. My Vikings can be quite fearsome in combat, so their opponents kept their distance and bided their time. That was when I learned about their trick. It seems they can inflict fatigue on the enemy, by emitting some sort of magic force. Actually, i don’t know what the justification for it was, but it was damned annoying. Earl Sigurd the Stout (he with the fine bear gut) had to cluster his units close to him, then use a Saga dice to lose excess fatigue. We never really caught up until the last turn.

That was when the enemy finally came onto the hill, and I got to charge. The Anglo-Danes were driven back, as Vikings in a full all-out charge, backed by the right Saga dice can be stunningly effective. However, the young lady gamely counter-attacked, and the game ended in a draw – I’d beaten her by just one point. If I was a trump-esque cad I’d claim that as a victory, but it was really an honourable draw.

We re-arranged the terrain slightly, then played another game. This time Joe was my opponent, fielding an irish warband. I’d never come across the Irish before, or read what their “battleboard” allows, so this was a learning curve. My first shock is that they get some sort of magical shooting power when you’re within 6″ of a terrain piece, like a wood, a hill or rough ground.

That was annoying – I was suffering casualties before I’d even got into contact. Then came the Irish cavalry. They had an annoying habit of rushing forward, lobbing javelins at you, then running away again, You could never catch them, and there didn’t seem a way to counter them either.  Joe’s hound pack – a bunch  of dogs that counted as a real unit – were screened by my archers, but  neither side wanted to get too close, so that meant two units never got into combat.

Eventually my patience snapped. I clustered my force behind Earl Sigurd’s Raven Banner, and rolled forward. the elite warriors of the Irish warband were waiting for me at the top of a wooded hill, accompanied by their warlord. I pretty much new it wasn’t going to end well, but as I said, I was out of patience, and almost out of time, as we’d have to pack up in 15 minutes. So, I charged uphill. First the leprechaun magic archers peppered me (I was within 6″ of rough ground) and then the cavalry did the same from the flank.By the time I got into contact I revved my troops up as much as I could, but it was to no avail. Joe had lumped his two units of 4 elite warriors into one big block, and they saw off my less efficient bondi and huscarls. Then though, Earl Sigurd and the Irish leader clashed, in what was effectively a duel to the death. The trouble was, both out leaders managed to kill each other. that meant the game was a draw, but technically Joe had the upper hand all along, and was winning the battle through inflicting casualties.

So, two games, of various degrees of success. i also got to fight two opponents whom I haven’t tangled with before. Of the two the Irish were the more effective of the three armies. That though, might because Joe has actually played this a lot, and knows exactly what his army can do by way of Saga dice and the battleboard. Next time I’m going to study the boards more closely – that way I might actually  find a way of countering the Anglo-Danish sleep spell and the Irish leprechaun magic. If anyone reading this knows how to trounce an Irish army, then do please send me a message, telling me all about it!