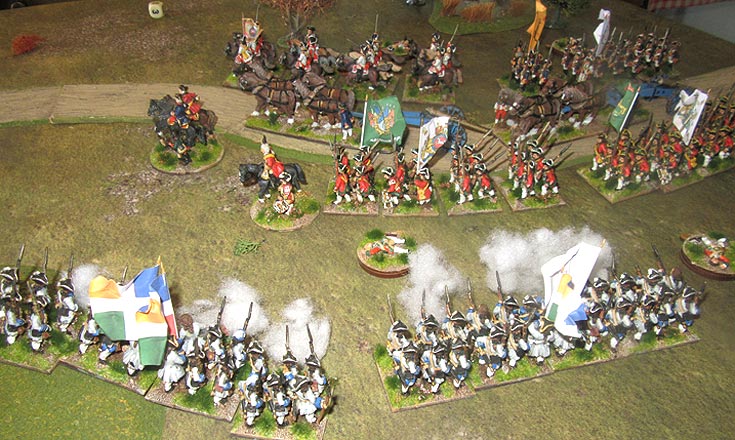 I missed the last couple of games due to to Covid striking the club. Fortunately I managed to squeeze in a small Seven Years War game at home this weekend, as a way of trying out the rules before next Thursday’s club game. Post of Honour is a SYW version of our current Napoleonic rules of choice, Shadow of the Eagles by Keith Flint. They’re very simple and straightforward, and available as a free download from Keith blog  keefsblogspot.com. This weekend I used them to introduce David, a non-wargamer to our geeky hobby, running a scaled-down version of Charles Grant Senior’s tried and tested “The Wagon Train” scenario.

In this game, played out on my absurdly thin 6×3 foot dining table, the wagon train was actually a pair of siege guns, which were being escorted into the camp of the Western Allies. Out to stop them were a French raiding force, led by the Comte of St. Germaine. He had three battalions of line infantry at his disposal, together with a regiment of dragoons and a unit of light infantry. He was assisted by two brigadiers. The two gun siege train was accompanied by three line infantry battalions (two Hanovarian and one Hessian), and regiment of Hanovarian cavalry. They were led by the Erbrinz of Brunswick, and one brigadier. On the far end of the table was the start of the Allied camp, where a Hanovarian gun battery covered the road, supported by a battalion of British infantry. 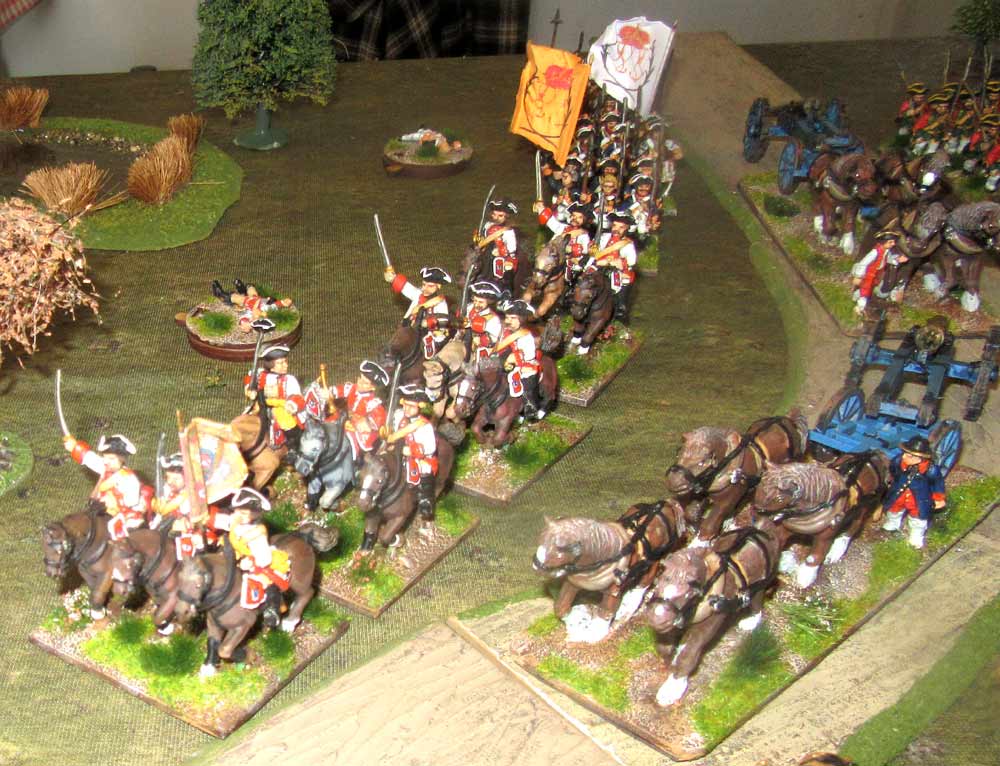 In this one, I led the Allied escort, while my friend David commanded the French raiders. Things began well enough, with a 9″ move down the road, the guns flanked by the escorts. Then the French appeared. There were four possible entry points, with the location decided by a die roll. Two French infantry units appeared on Turn 1, at Entry Point 2 – just off the left flank of the convoy. It couldn’t have been worse! They simply advanced out of the woods, lined up and began blazing away at the Hanovarian infantry. 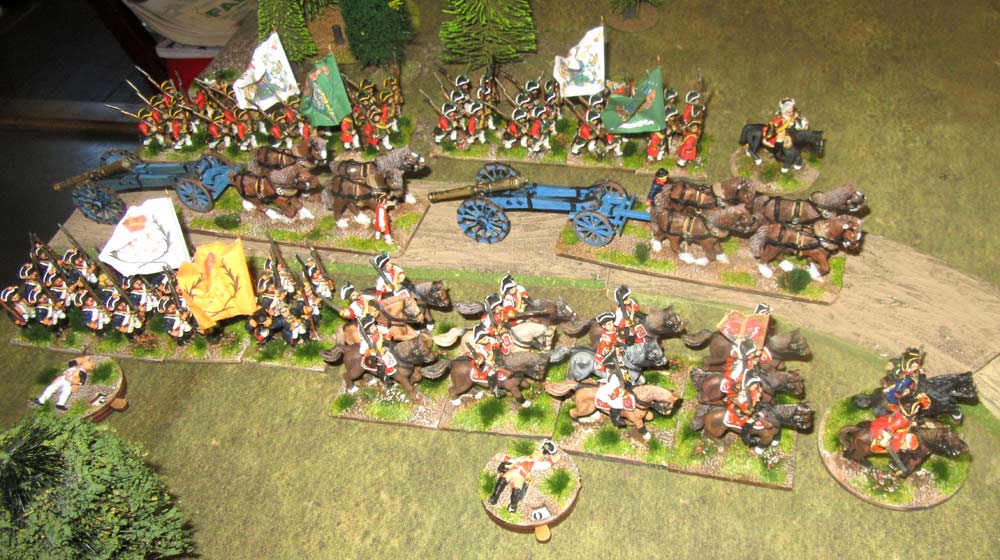 It takes a turn to change formation from march column into line, all the time under fire. Still, the Hanovarians managed it, and began returning the increasingly effective French fire. Then, on Turn 2 the rest of the French arrived at Point 4 – opposite the right flank of the convoy. Things were getting out of hand! This time the French line battalion was far enough away to be out of range, but the La Reine Dragoons accompanying it were quick to deploy into a double line, and prepare to launch a charge. Meanwhile the French light infantry – the Volantares Etrangers de Clermont Prince – moved up to block the road, sniping at the Hanovarian cavalry as they went. 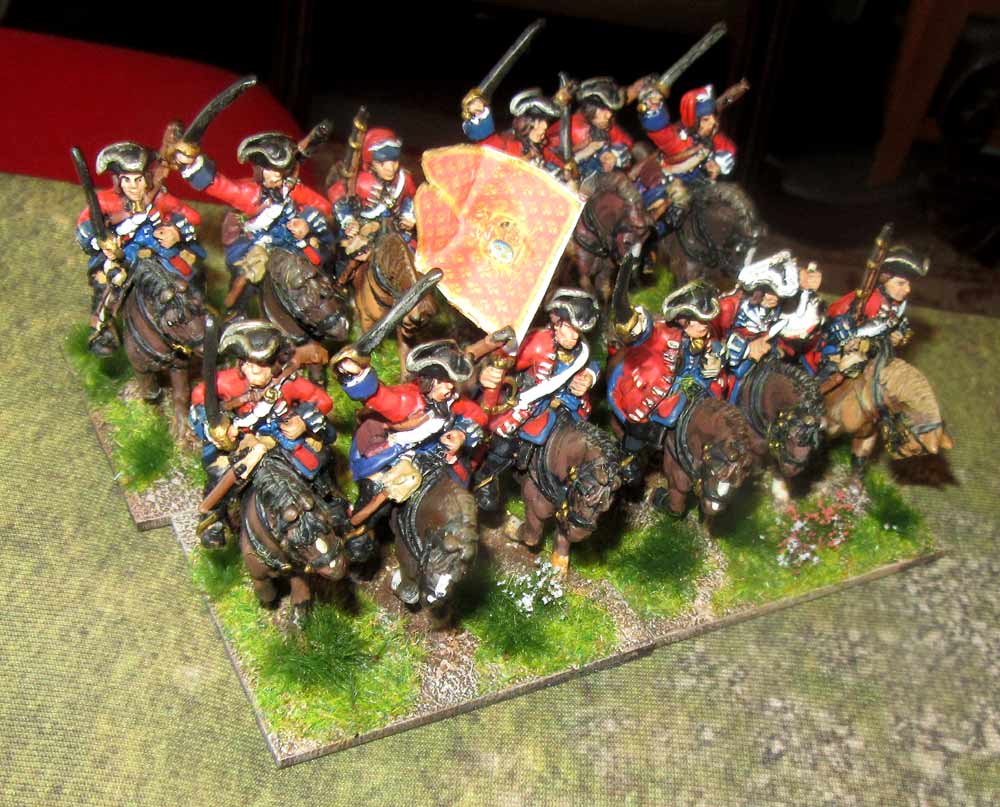 The Hanovarian cavalry formed up into a double line too, while the Hessian von Toll battalion behind them formed a line to face off the French infantry on their flank. A lot depended on who won the initiative on Turn 3 – and it went to the French. The French dragoons duly charged the Hanovarian von Hodenberg cavalry, who counter-charged. before we worked out what happened though, we had the firing to deal with. By this time both the Hanovarian battalions were busily firing at the two battalions of the Lyonnais regiment. 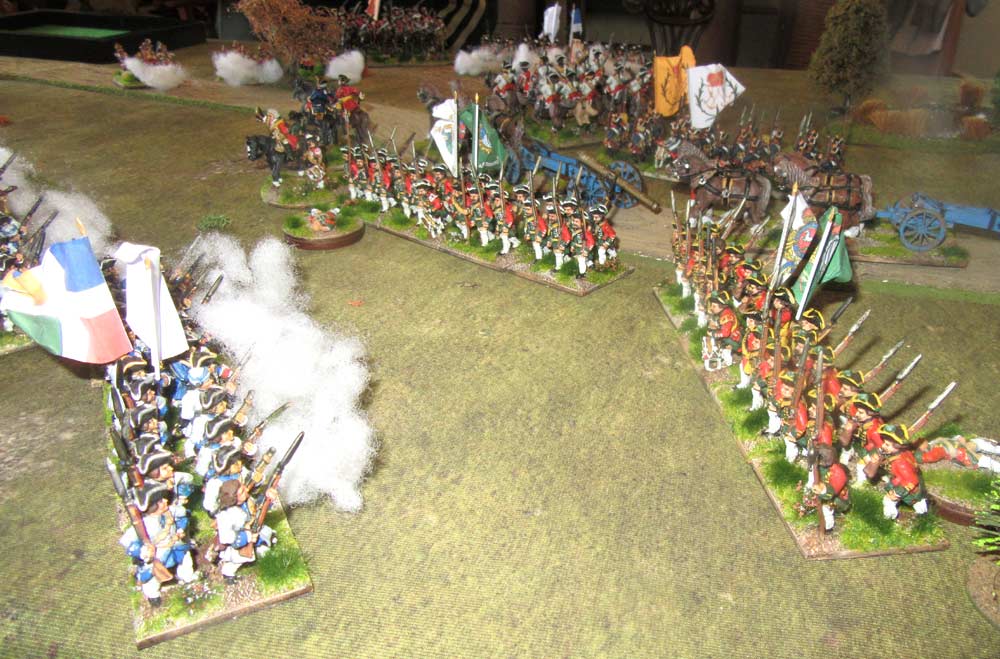 Somehow though, the French consistently rolled better, and so Hanovarian casualties mounted. Eventually the leading battalion – von Scheither’s – was “Weakened” – a precursor to it routing. The Junge Zastrow battalion was made of sterner stuff though, and managed to “weaken” one of the two French battalions. Then though, it was time to sort out the cavalry melee, on the far side of the road.

It was a brutal affair, with the Hanovarians inflicting two “hits” and the French three. This though, was enough to drive the Hodenburgs back – giving them another “hit”. They’d already taken a “hit” from musket fire, so they were now “Weakened”. So, not a good day for them! The French dragoons didn’t pursue, but the next turn they charged in again, fighting in what looked like a tunnel with a battalion of the Touraine regiment on one side and the Hessian von Toll battalion on the other. Inevitably, the Hanovarians were swept from the field. The French dragoons then rolled a pursuit, and went charging off after the siege train, which by now had turned about. 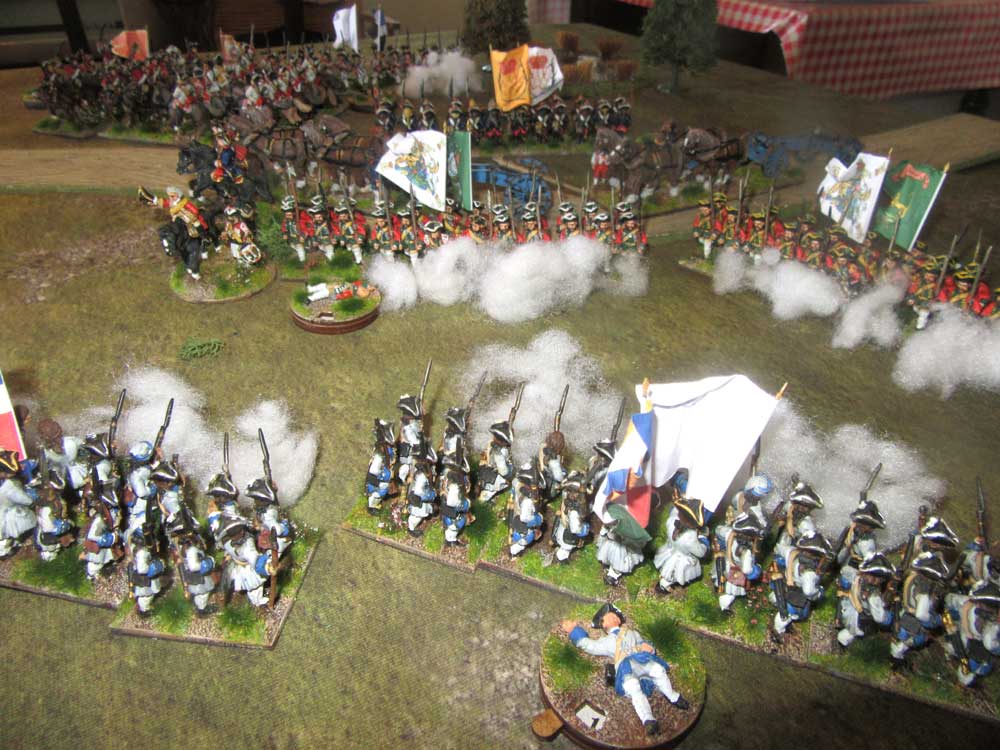 That was about the only Allied achievement of the game – the Von toll regiment inflicted to musketry hits on them, which left the La Reine dragoons “weakened”. That meant they couldn’t charge home and capture the siege train – at least not this turn. 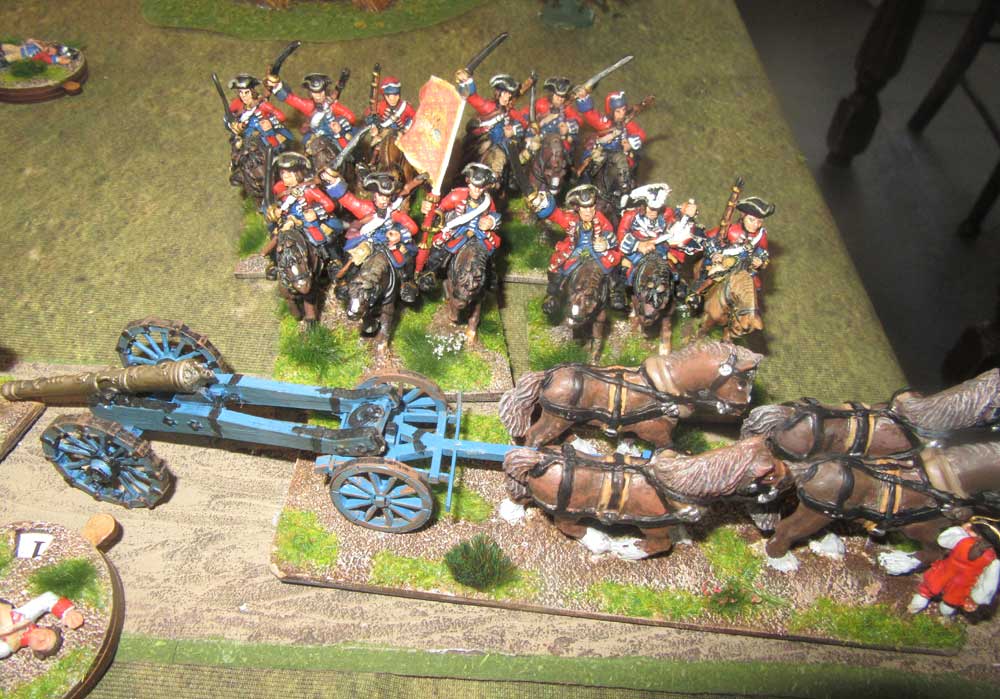 Over on the far side of the road things were unravelling even faster. The French musketry did the trick and von Scheither’s battalion broke and ran. The only thing that probably saved the Junge Zastrows was that they were further back, and were able to backpedal towards safety. 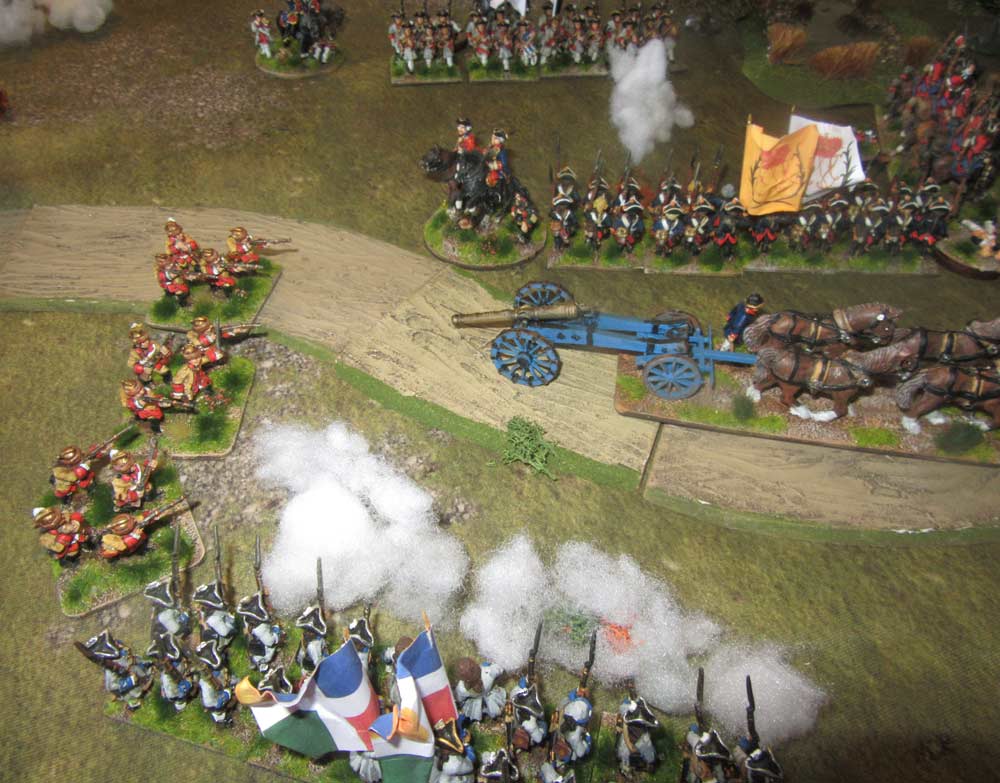 The game was now reaching its dreary and inevitable conclusion. With their cavalry and one infantry battalion gone, there was no way the Allies were going to make it through to the camp. The best they could do was to get themselves off the table, with the two infantry battalions trying to hold off the French hordes. The garrison in the camp were too far away to intervene, and while the Allied gunners had scored one hit on the French dragoons during the game, the battle had now rolled away out of range of the guns. 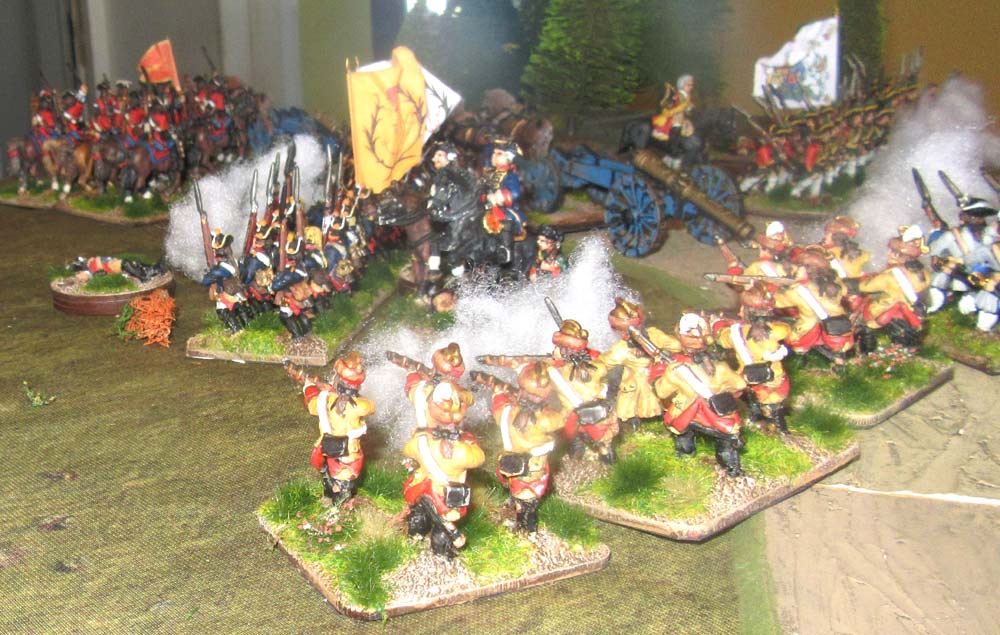 That then, is where we ended the game. It was looking extremely unlikely that the siege guns would make it off the table, and they’d already taken a couple of hits from the French light infantry in their funky turbaned helmets. The von Toll regiment was virtually surrounded, and only the red-coated Hanovarian Junge Zastrows were still holding their own. So, the game was declared a pretty emphatic French victory. As for the French commander, did it encourage him to take up wargaming? Well, no. After being excused, he looked relieved, and scuttled off to spend the rest of the afternoon watching Stranger Things. Well, you can’t win ’em all! 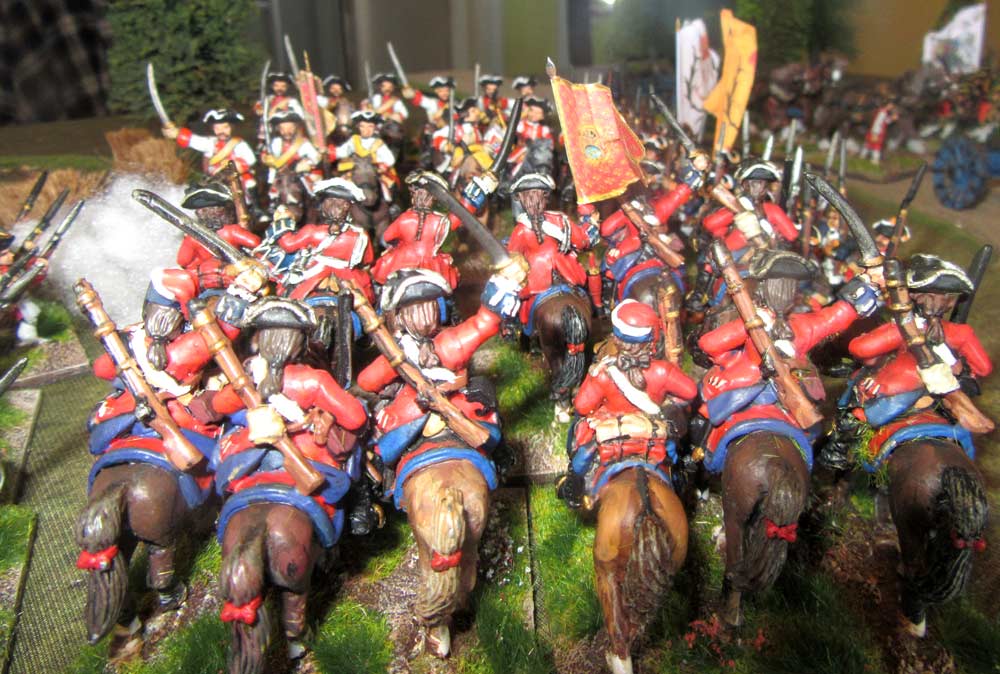