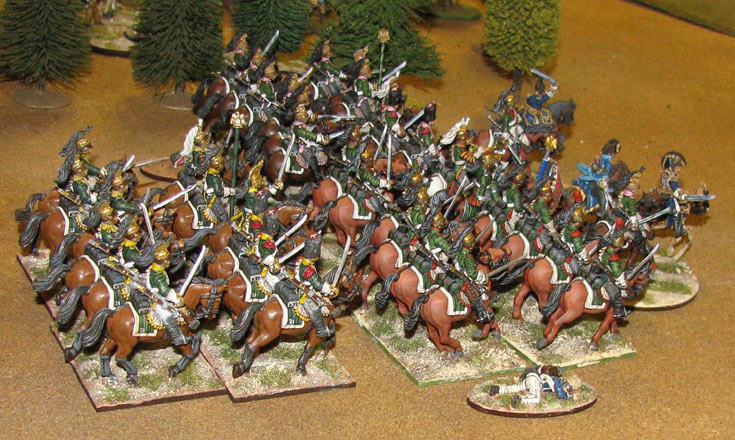 This was a rare event these days – an evening when Dougie Trail and I were both in the SESWC in Edinburgh. We celebrated by taking our Peninsular War figures out for a spin. Dougie commanded the French (assisted by Bart Zynda), while I look charge of the Anglo-Portuguese. In this game the outnumbered British were defending a line of two ridges, with two small British brigades deployed on one, with two gun batteries in support. A Portuguese brigade was left holding the much less defensible left-hand ridge. We laid it out so that the French had easy access to this high ground – the only unit capable of overlooking their initial approach was a unit of the Loyal Lusatian Legion, ensconced in a little wood on the end of the ridge. In effect we were recreating the “Flank Attack” situation from Charles S. Grants’ Scenarios for Wargames (1981), except neither of us had the book to hand. The question really was whether the French right hook would be able to break the Anglo-Portuguese line. If the French ended the day in control of one ridge they could claim a minor victory – a tenable foothold on the other ridge was a major win.

Their French had divided their infantry division into two large brigades, each of six battalions. One screened the British on one ridge, backed by two gun batteries, while the rest formed up en masse and advance against the Portuguese. The British had one brigade of light cavalry at their disposal, and it was uselessly posted on their far right flank. They were matched by a French light cavalry brigade, while a larger brigade of dragoons was deployed in support of the French right hook, supported by a horse artillery battery. The four battalions of Portuguese were supported by the Lusatian Legion skirmishers, and their own battery of two Portuguese guns. Obviously the French began with an all-out attack on their right, and on that side of the table both sides engaged in a largely ineffective artillery duel. The decisive point though, was over on the Portuguese flank.

The Lusatian Legion skirmishers were only able to put up a token resistance before they were forced to withdraw back behind the Portuguese line. The French came on strongly, with two battalions pinning the front of the Portuguese, while another two worked their way around the Portuguese left flank. The remainder stayed in column, acting as a reserve. In the firefight that followed both sides lost a battalion, but the tenacity of the Portuguese battalion on the far left helped slow down the French tide. At that point the French launched their cavalry, and a lucky die roll of “3” on 2D6 allowed the dragoons to sweep across the table and into the Portuguese guns, which by this stage were pointing the wrong way, and engaging the French infantry. the result was inevitable – the guns were overrun, and the dragoons rode back to their starting positions, to redress their lines, ready for another charge. Things were now looking pretty rosy for the French!

Fortunately the Portuguese foot were made of sterner stuff. Thanks to some very lucky saving throws and break test rolls the line held, even though it left the die-hard Portuguese on the left horribly exposed. To save them the British brought up two battalions from their left-hand brigade, and formed up at right angles to their original line, in support of the battered Portuguese. Finally the British light cavalry brigade managed to redeploy from one flank to the other, and formed up on the table edge, to the left of this British “refused flank” line. The rest of the British force did nothing, with the sole exception of a detached unit of riflemen, who advanced into the wood on the centre of the table to harry the French guns. They were matched by French skirmishers, and for several turns the two sides fired away at each other. Just like the gunnery duel going on beside them, this exchange of fire never really achieve much, but at least it was entertaining!

By this stage we were fast running out of time, as 10pm was approaching. We’d spent so long chatting to old friends and setting up that we never got to finish the game. However, at its close the Portuguese still had a foothold on the left-hand ridge, and the British had pretty much solidified their line, making it all but impossible for the French to achieve anything more with their big flank attack. For their part the French had cleared the rest of that ridge and driven the Portuguese back. they also inflicted more casualties – both sides lost a battalion apiece, but the Portuguese also lost their gun battery, and by the end of the game two of their four battalions were hanging on only by the strength of their lucky die rolls. In the end we called the game a draw, albeit one where the French had got the best of the day’s fighting. Despite its lack of a clearer conclusion we had an enjoyable game, and it left me wanting to paint up those British dragoons which have been languishing in my lead pile, so I’d have something to counter Dougie’s French dragoons with!